Raymond Breinin, a Russian/American painter and designer, was born in Vitebsk, Russia, where he commenced his art studies with Uri Pen (who was also the first teacher of Marc Chagall), and later attended the Vitebsk Academy of Art where Malevitch was the director. Breinin came to the United States with his family in 1922. When he came to America he attended classes at the Art Institute of Chicago and the Chicago Academy of Fine Arts. While working as a painter of murals for the WPA, he was invited to join the Downtown Gallery in New York City, one of the foremost galleries at the time, where he exhibited in one-man shows and group shows over a period of 18 years. The winner of numerous major prizes at the Chicago Art Institute and other museums, he also won the $1000 purchase prize at the Metropolitan Museum of Art's "Artists for Victory" exhibition. He designed the sets and costumes for Anthony Tudor's ballet, "Undertow" produced by the American Ballet Theater. He executed commissions for Life, Fortune and Redbook magazines, for the Capehart Corporation, Eli Lilly and others, and was a noted illustrator and portrait painter. He did the decor for two restaurants in Chicago and painted murals in the Pump Room at the Ambassador East Hotel and in the Emerald and Jade Rooms at the Sherman Hotel in Chicago. From the 1960s–80s, he taught courses in painting and life drawing at the Art Student's League and the National Academy of Design in New York City. Before that, he taught at the University of Southern Illinois, where he was artist-in-residence, the University of Minnesota and ran his own school of art in Chicago. He was a member of the National Academy of Design.

Raymond Breinin
In The Dark of the Hour, 1942 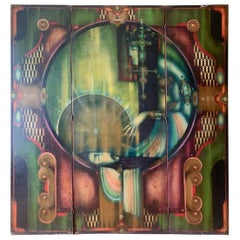 Smelts in a Landscape
By John Wilde
Located in Rego Park, NY
Category 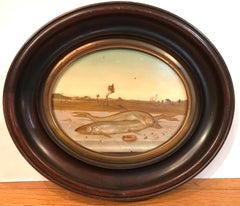 John Wilde
Smelts in a Landscape

Under The El
By Don Freeman
Located in Rego Park, NY
Category

Don Freeman
Under The El

Trickery at the Polls
By Don Freeman
Located in Rego Park, NY
Category

Don Freeman
Trickery at the Polls

Lawrence Lebduska
Nude on Sofa with Lebduska paintings on wall, 1958