Vincenzo Camuccini, sometimes also referred to as Camucini, was one of the most important Italian Neoclassicists and history painters, despite having lived in a period in which romantic culture had taken hold within the European artistic-literary landscape. It was Pietro, Camuccini's brother, who became famous for cleaning up Michelangelo's Last Judgment in 1824-25, and who carried out various restorations for the Borghese, to push Vincenzo towards art. Every day, Camuccini visited Raphael's Rooms and trained himself to copy the style of that period. In adolescence, he first went to the school of Domenico Corvi and later to the most famous of David. In addition to studying the masterpieces of classical sculpture and Renaissance painting, Camuccini was very fond of representing everyday reality, portraying both nature and the people of the street to study their expressions and give their paintings as realistic a note as possible. Probably in this, the painter was influenced by Romanticism, very attentive to the beauty and grandeur of nature, in all its details. His interest in the realistic rendering of the subjects led him to attend hospital environments to perform studies on corpses. After spending years copying the greatest of art history, Camuccini began to create works of his own invention. His fame grew over the years, leading him to receive increasingly important commissions, up to the appointment by Pope Pius VII as director general of the Fabbrica di San Pietro and to the superintendency of the Vatican Museums, which over the years had been illustrious by artists such as Michelangelo, Maderno and Bernini. For the pontiff, he created The Incredulity of St. Thomas and a St. Simon and Judas, two large canvases for St. Peter's Basilica. At the same time, Vincenzo Camuccini opened an important atelier in Rome, frequented by many Italian and foreign artists.

Vincenzo Camuccini
Francesco I and Titian in the Painter's Studio - Original Drawing 1824, 1824

Related Items
Figure In The Room - Original Green Ink Drawing - 20th Century
Located in Roma, IT
Figure In The Room is an original drawing on paper realized by an artist of the XX century. The state of preservation of the artwork is very good 30.5x22.5cm The artwork represent...
Category

H 12.01 in. W 8.86 in. D 0.08 in.
Interior of a House - Original China Ink Drawing - Early 19th Century
Located in Roma, IT
Interior of a house is a fine original drawing (China ink and watercolor on paper). Unsigned. This artwork could be attributed to Thomas Stothard. In spite of the small dimensions, ...
Category 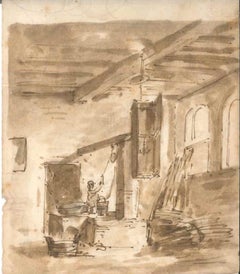 H 4.41 in. W 3.71 in. D 0.08 in.
Reception - Ink and Watercolor on Paper by Emile Brod - Early 20th Century
Located in Roma, IT
Reception is an original drawing in ink and watercolor on paper realized by E.Brod. Hand-signed on the lower right. Good conditions except for some stains. The poetic artwork repr...
Category

H 14.97 in. W 13 in. D 0.04 in.
Church Interior - Ink and Watercolor by J. R. Leblanc - Early 20th Century
Located in Roma, IT
"Church Interior" is an original drawing in ink and watercolor on paper, realized by Jules Rene Leblanc. Hand-signed on the lower right in pencil. The state of preservation of the ar...
Category

H 27.17 in. W 19.69 in. D 0.08 in.
Ancient Egypt - Original Watercolor by R. Fedi - Early 20th Century
Located in Roma, IT
Ancient Egypt is an original drawing in watercolor on cardboard realized by R. Fedi in 1922. The state of preservation of the artwork is very good. Hand-signed on the lower right a...
Category

H 28.55 in. W 20.87 in. D 0.04 in.
Ritual - Original Watercolor by E. Sacchetti - Early 20th Century
Located in Roma, IT
Ritual is an original drawing in watercolor on cardboard realized by the Italian artist Enrico Sacchetti as scenography for a theatrical representation in the early 1920s. The state...
Category

Find wide variety of authentic Vincenzo Camuccini art available for sale on 1stDibs. You can also browse art by Vincenzo Camuccini in paint, canvas, fabric and more by medium. Not every interior allows for large Vincenzo Camuccini art, so small editions measuring 12.899999618530273 inches across are available. Customers who are interested in this artist might also find and find the work of. On 1stDibs, the price for these items starts at $2,026 and tops out at $34,520, while the average work can sell for $20,722.