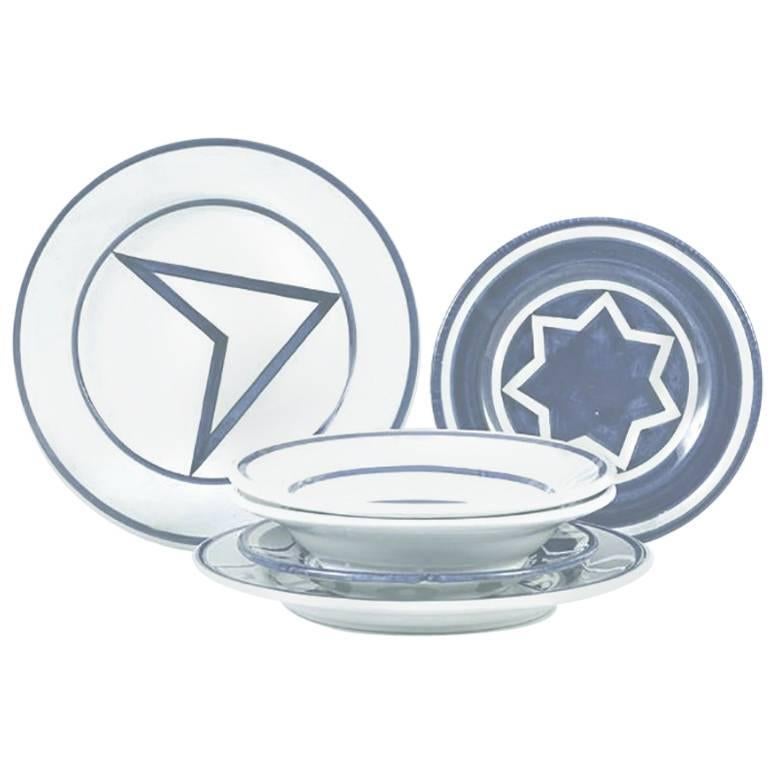 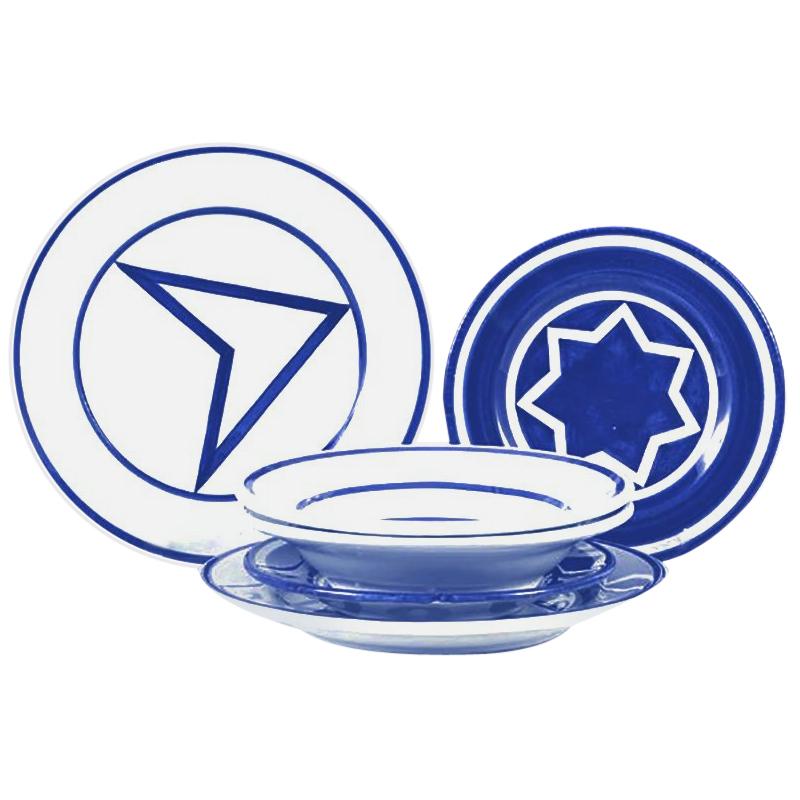 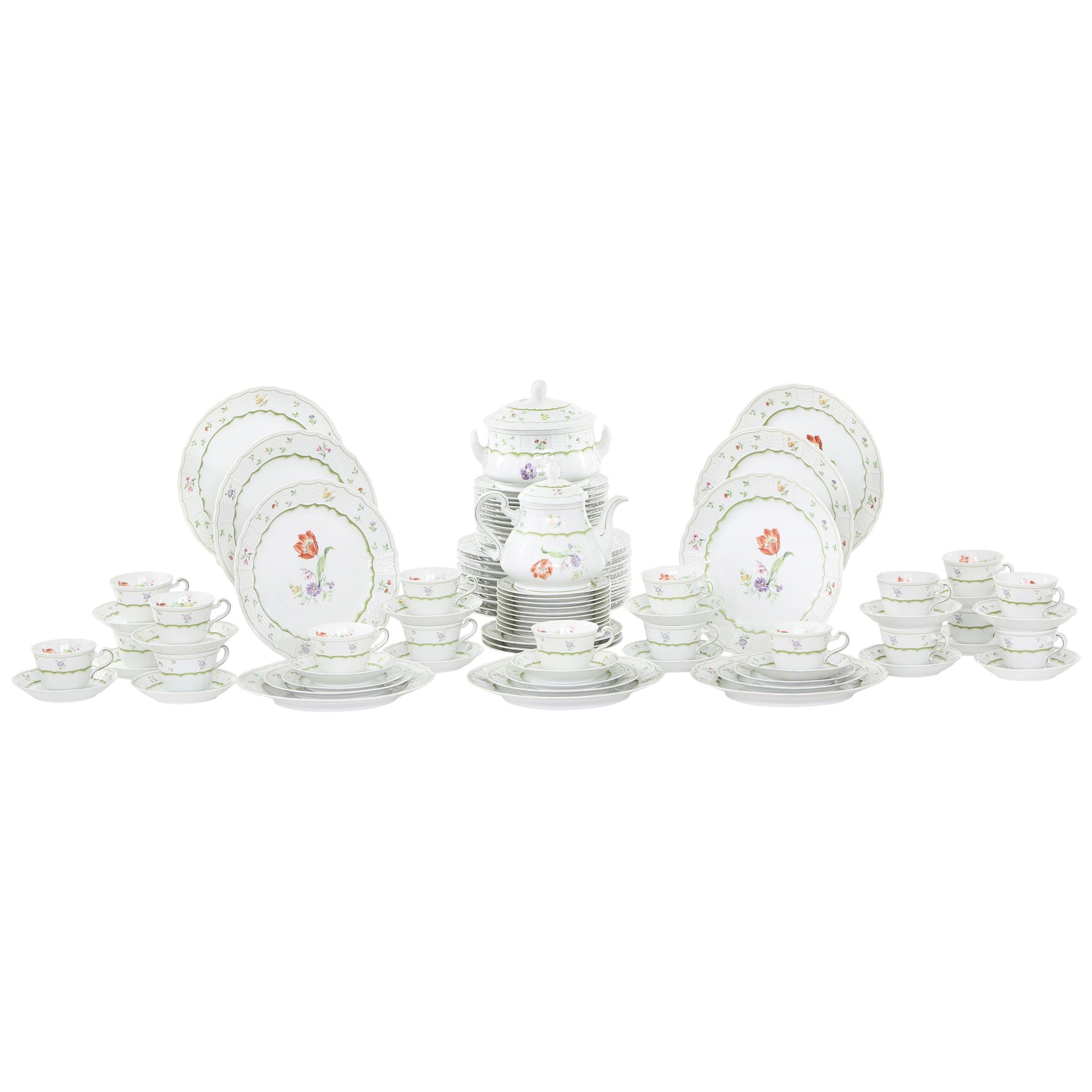 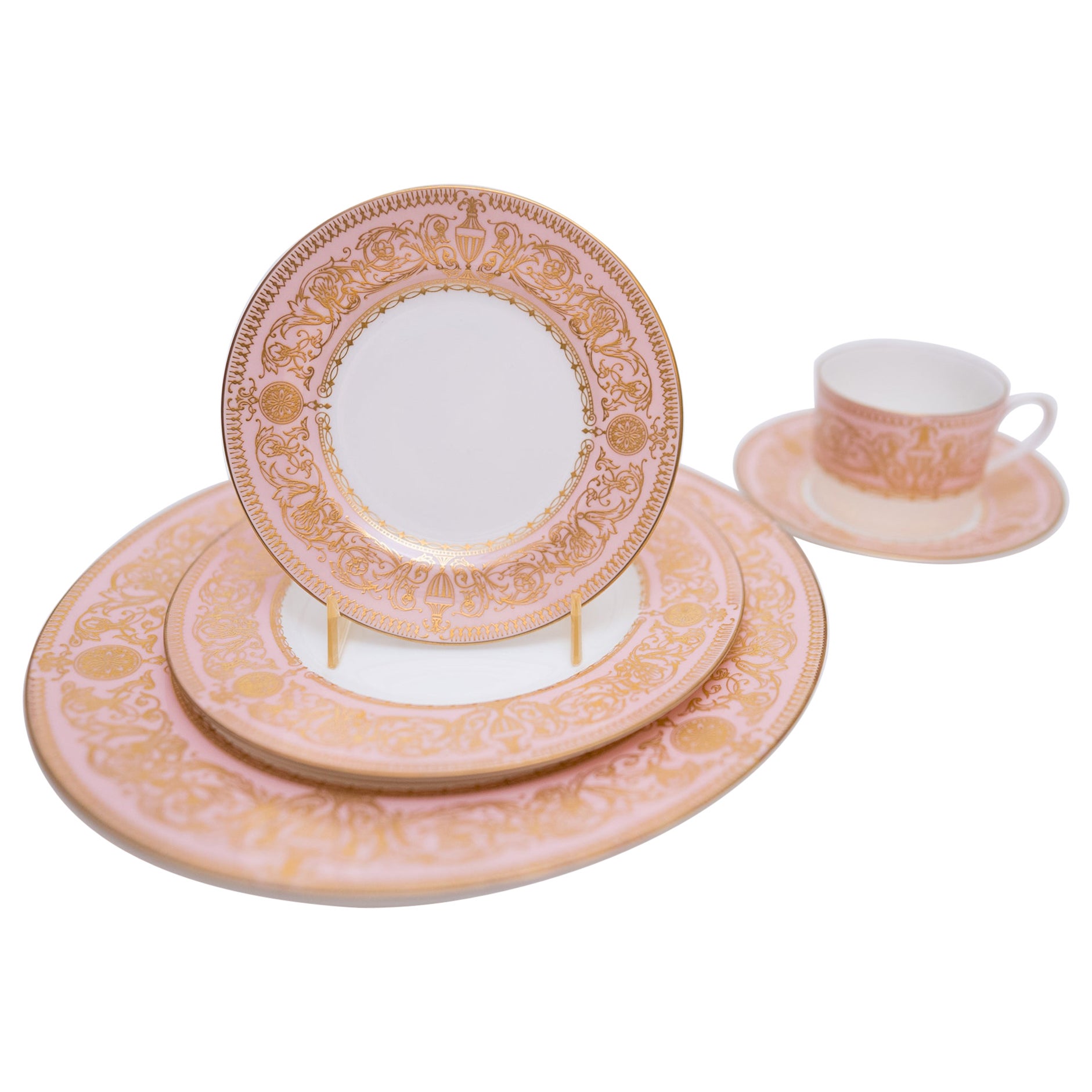 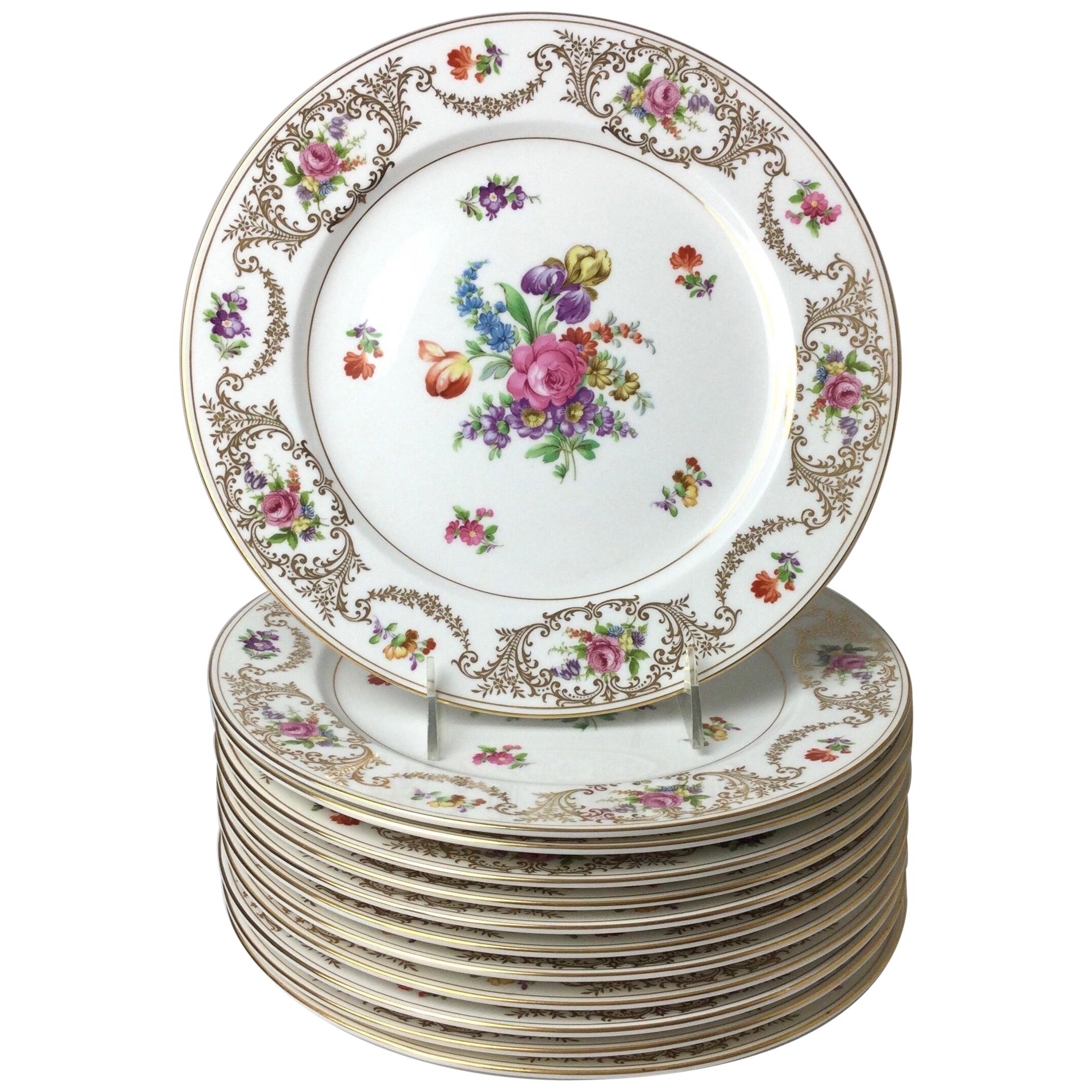 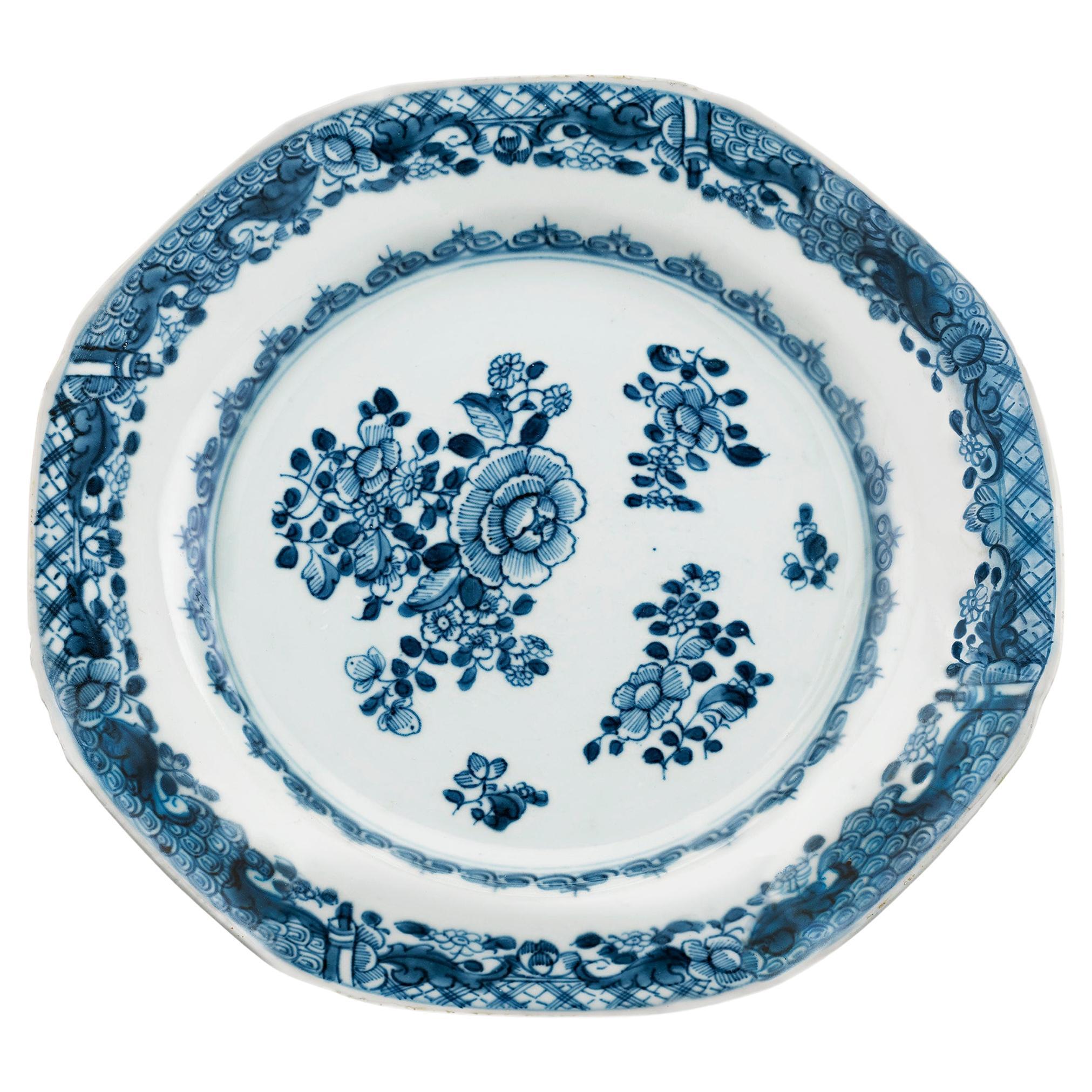 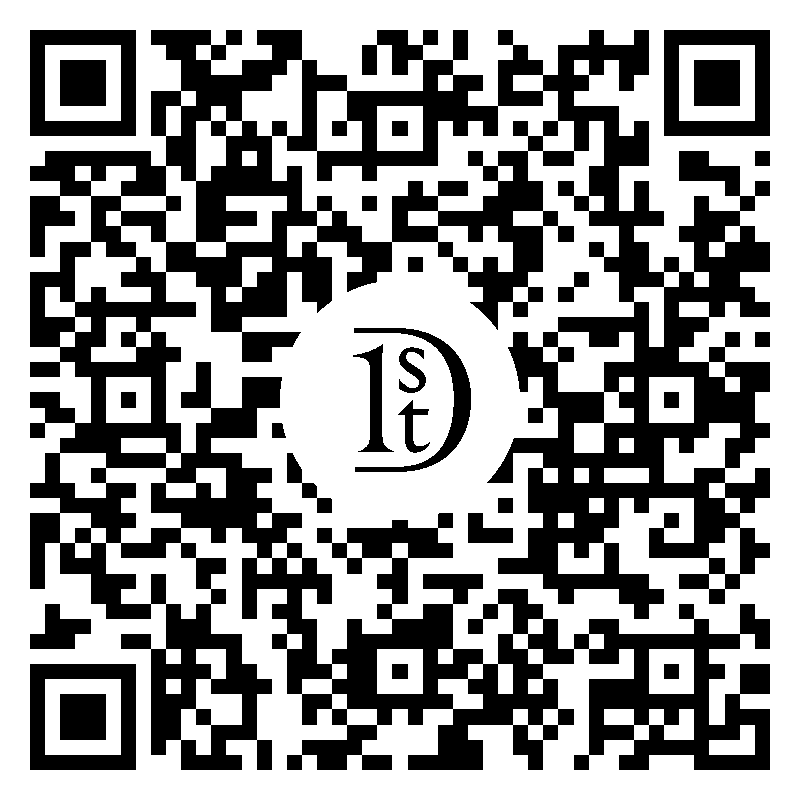 Star within two circles dinner service Designed 1984/fabricated now Set of 24 salad plates, dinner plates and pasta bowls 8 salad plates: 8" diameter 8 pasta bowls: 10" diameter 8 dinner plates: 11" diameter Stamped signature with a copyright on the verso. Each setting within each set of eight (dinner plates, salad plates or pasta bowls) shows a star with a different number of points beginning with a 3-point star and going up to a 10-point star. For example, when you purchase a set of eight dinner plates, each plate will have a differently numbered star. If you purchase a complete service of 8 settings (24 pieces total), you will receive 8 matching settings showing 8 different stars. The thumbnails to the left show a 5-point setting, a 10-point setting and a 4-point setting. Our stock is constantly changing, so please give us a call if you're looking for pieces that are immediately available. In the early 1980s, Sol LeWitt and his family bought a rustic farmhouse in Spoleto, Italy. While in Rome looking for new dishes, he and his wife, Carol, discovered that the maiolica pottery they so admired was made locally, almost in their backyard, in Deruta, Italy. The craftspeople in Deruta were continuing the more than 600 year old tradition of creating maiolica, a technique of applying a glossy base glaze whitened with tin oxide onto fired clay pottery. Vivid, hand-painted colors are then added and the pieces are fired again. LeWitt designed his own dinnerware in Deruta and these same pieces are now available through Artware Editions in the full range of colors the artist intended. Each piece is made by hand by the same artisans who for generations have kept this proud and classic Italian tradition alive. This dinnerware is lead-free and dishwasher safe. If we do not already have it in stock the fabrication time is approximately 12 weeks. 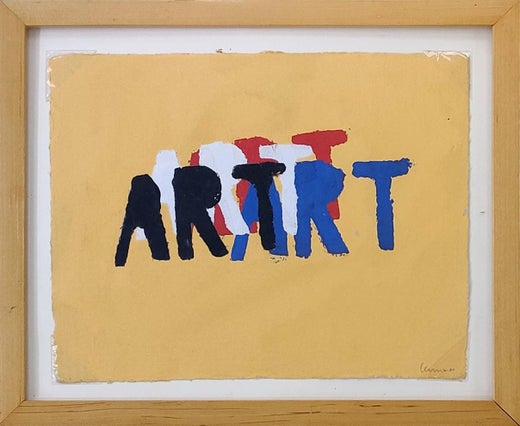 While New York City’s art scene in the 1950s and ’60s revolved around Abstract Expressionism, multidisciplinary artist Sol LeWitt paved an alternative path, creating a prolific output of work in the genres of minimalism and, later, Conceptual art.

While LeWitt is perhaps best known for his immense “wall drawings,” he created work in a wide range of media, including drawing, painting, printmaking and sculpture. (However, in a characteristic rebuttal of canonical art history, he referred to these pieces as “structures.”) He also produced several texts, including the seminal Sentences on Conceptual Art (1969).

Born in Hartford, Connecticut, in 1928, LeWitt received a BFA from Syracuse University before going to work as a graphic designer for the renowned architect I.M. Pei. He would later work at the book counter at the Museum of Modern Art, where his colleagues included fellow artists. LeWitt’s early exposure to architecture may well have had outsize influence on his subsequent career: He was known for the geometric nature of his work, specifically his fastidious, near-obsessive treatment of the cube, which he rendered repeatedly in various ways throughout his paintings, structures and wall drawings.

In the 1960s, LeWitt showed in several group exhibitions throughout New York and also began to experiment with three-dimensional structures, most modular riffs on the cube shape. His work was included in “Working Drawings and Other Visible Things on Paper Not Necessarily Meant to Be Viewed as Art,” curated by Mel Bochner, another leading exponent of Conceptualism.

Later, LeWitt debuted his now-iconic wall drawings, creating work directly on the walls of galleries and show spaces, beginning with pioneering gallerist Paula Cooper’s inaugural show in 1968. The wall drawings became a prime example of LeWitt’s philosophical approach to art, with their installation often carried out by museum staff or curators following precise instructions from the artist.

“The idea,” the artist once said, “becomes a machine that makes the art.” LeWitt continued to produce work until his death in 2007.

Find a collection of original Sol LeWitt art on 1stDibs.

About the Seller
5.0
Located in Jersey City, NJ
Vetted Seller
These experienced sellers undergo a comprehensive evaluation by our team of in-house experts.
Established in 2005
1stDibs seller since 2010
402 sales on 1stDibs
Typical response time: 1 to 2 days
More From This Seller

$38,500
Insect Porcelain Dinner Plates Bee
By Bertrando Di Renzo
Located in ROCCAVIVARA CB, IT
What is more colorful than a colorfulr insect? Butterflies, dragonflies, beed and ladybugs will make your table sparkle.
Category

$49 / item
Set of Ten Danish Modern Teak Dinner Plates by Langva
Located in Brooklyn, NY
Beautiful and complete set of ten teak plates manufactured in the 1960s by Langva of Denmark. Slight variations in tone and wood grain along with surface scuffs to some plates, as sh...
Category

$850
Les Navas Porcelain Dinner Plate
Located in Dallas, TX
The Les Navas dinner set features a hand-painted guilded leopard in 12k Gold under the night sky. The activities of this great animal are showcased in the motif of this set. Playful,...
Category

$35 / item
Les Régaliens Porcelain Dinner Plate
Located in Dallas, TX
Shades of royalty are brought to the forefront with Les Hapsburgs. Rich shades of purple are outlined with magnificent gold. Feast like monarchs with this regal dining set. This ...
Category

$50 / item
Les Cléments Porcelain Dinner Plate
Located in Dallas, TX
Inspired by the geometric patterns featured in Portuguese tiles, the Les Clément Dinner will add a layer of cool-ness to your dinner table. Dynamic black lines that lead up to the ha...
Category

View All
Pair of Czech Contemporary May Champagne Coupe Glasses Handmade, in Stock
By Felicia Ferrone
Located in Chicago, IL
May champagne coupe glasses, set of two A pair of Czech contemporary glass handcrafted is the perfect modern champagne glass. The May Collection is inspired by the lightness of th...
Category

$416 / item
Georg Jensen Koppel Crystal Carafe with Silver Wire by Henning Koppel
By Henning Koppel, Georg Jensen
Located in New York, NY
The Koppel crystal carafe is decorated with a flat pure silver thread. The silver thread which 'extends' the 'neck' is inspired by the African tradition of giving a girl a new ring t...
Category