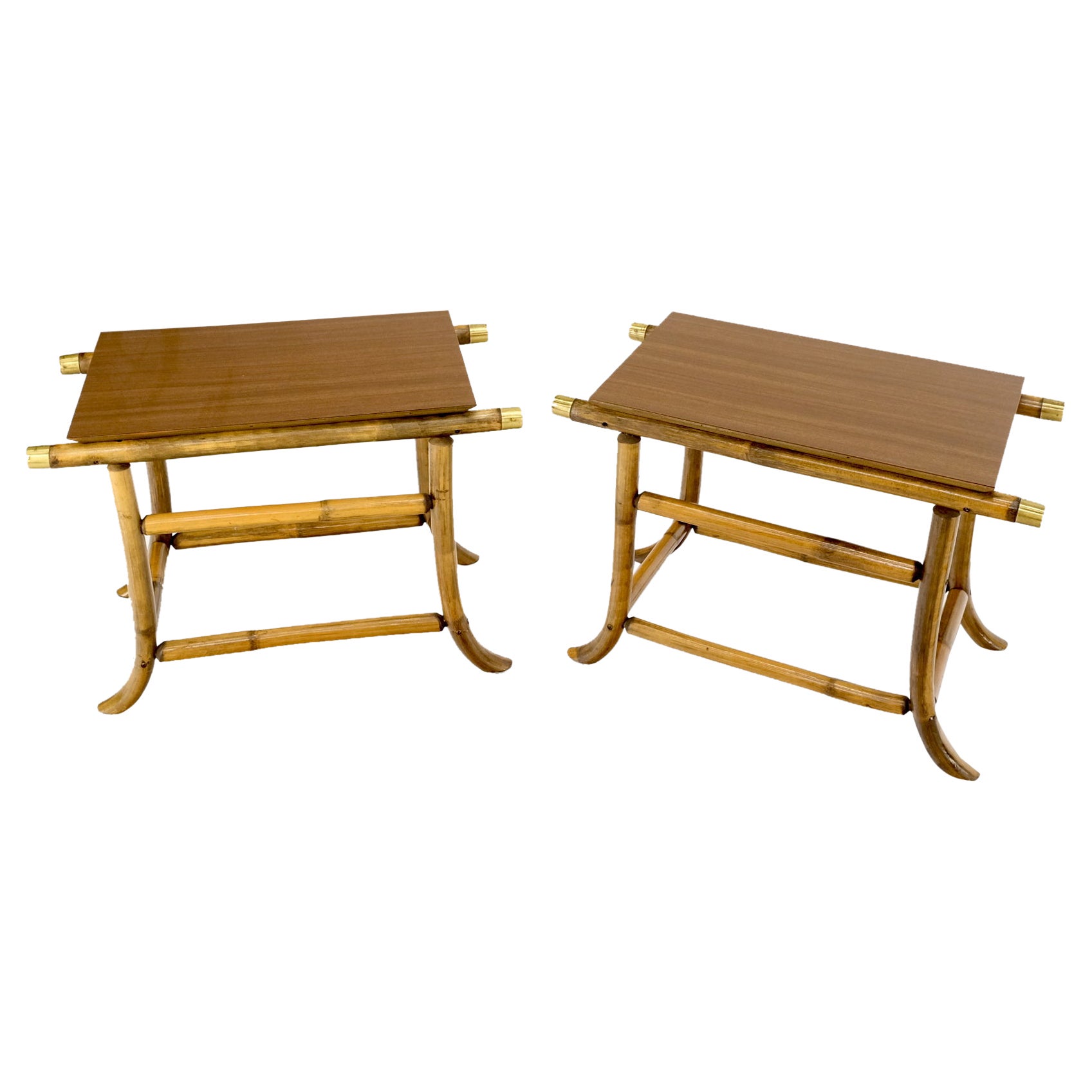 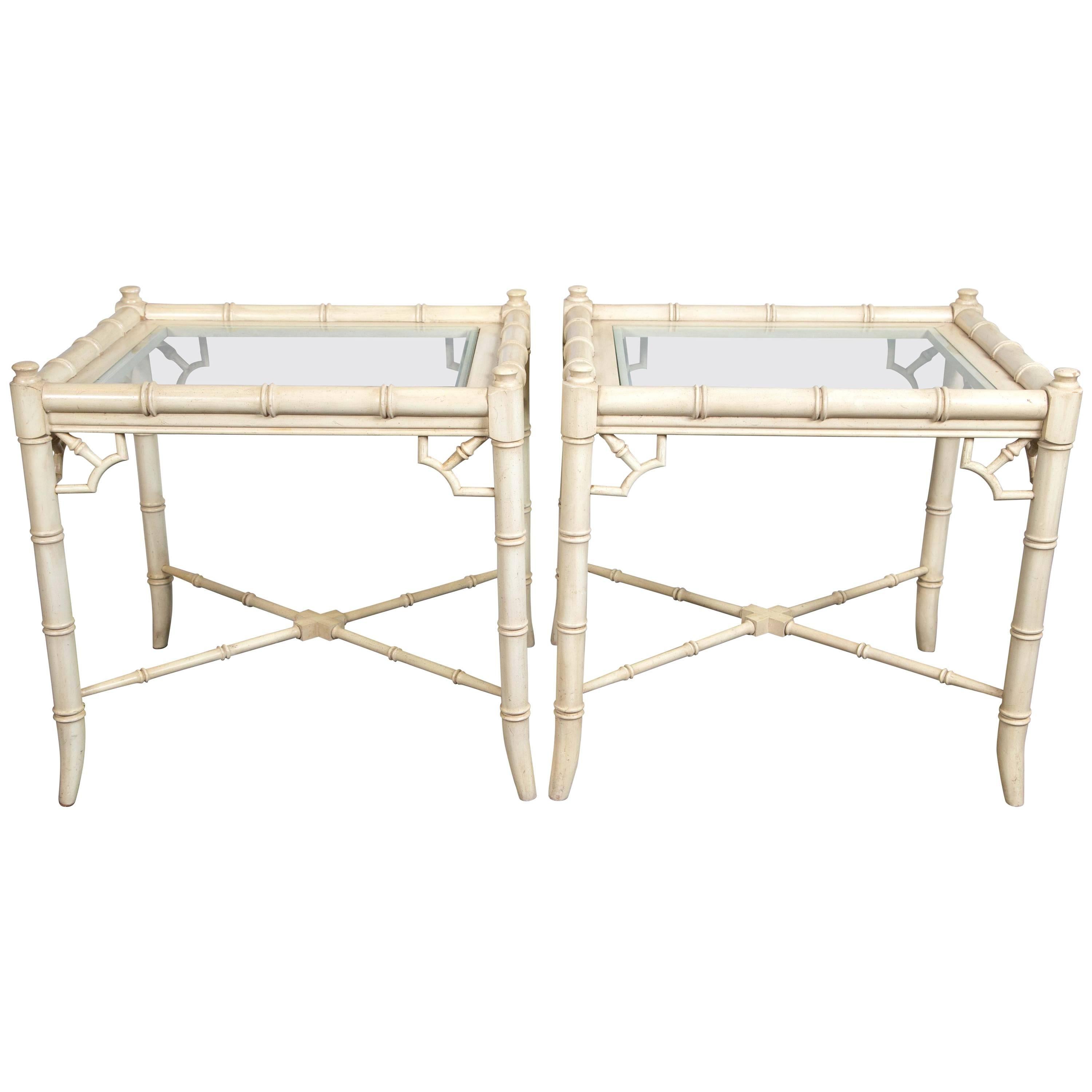 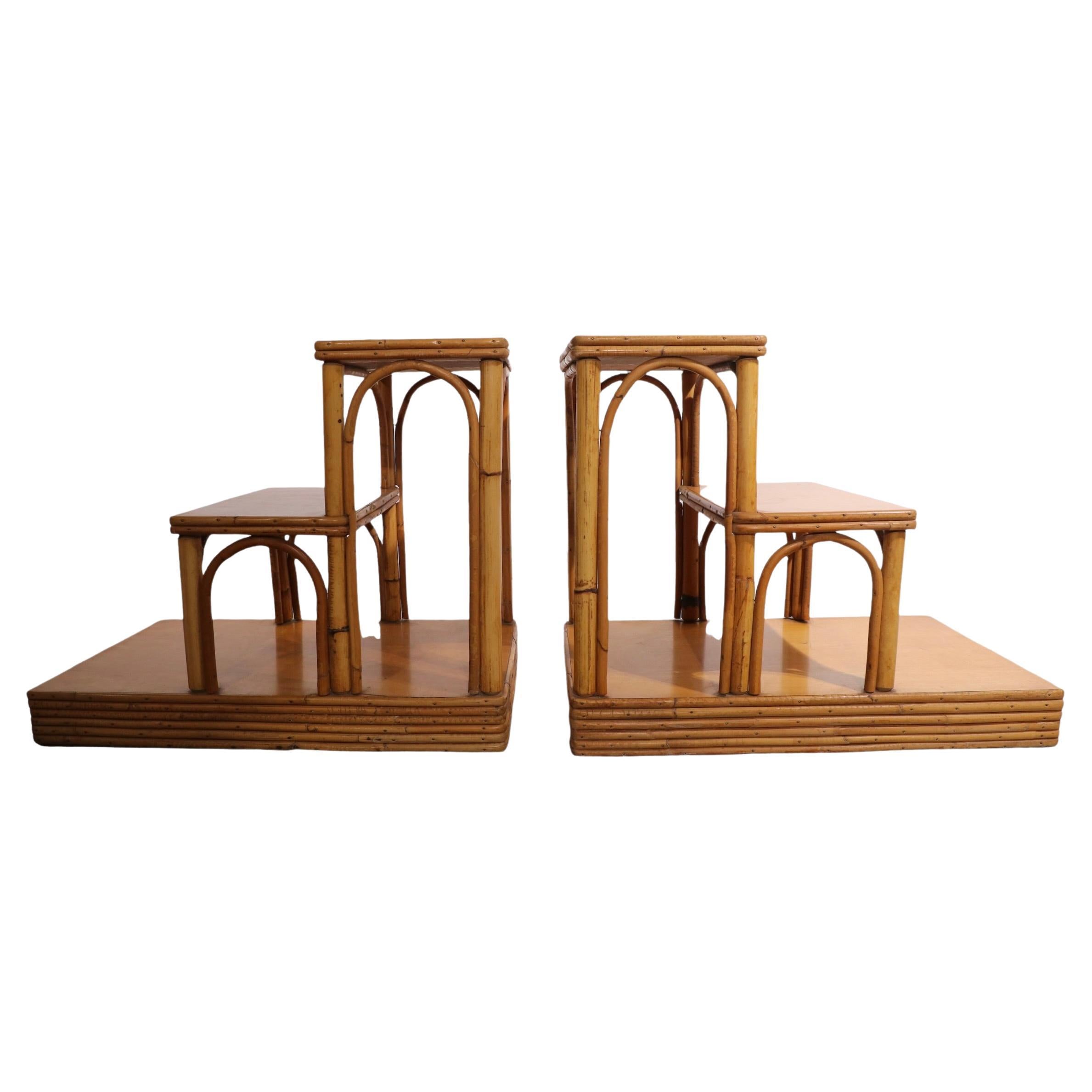 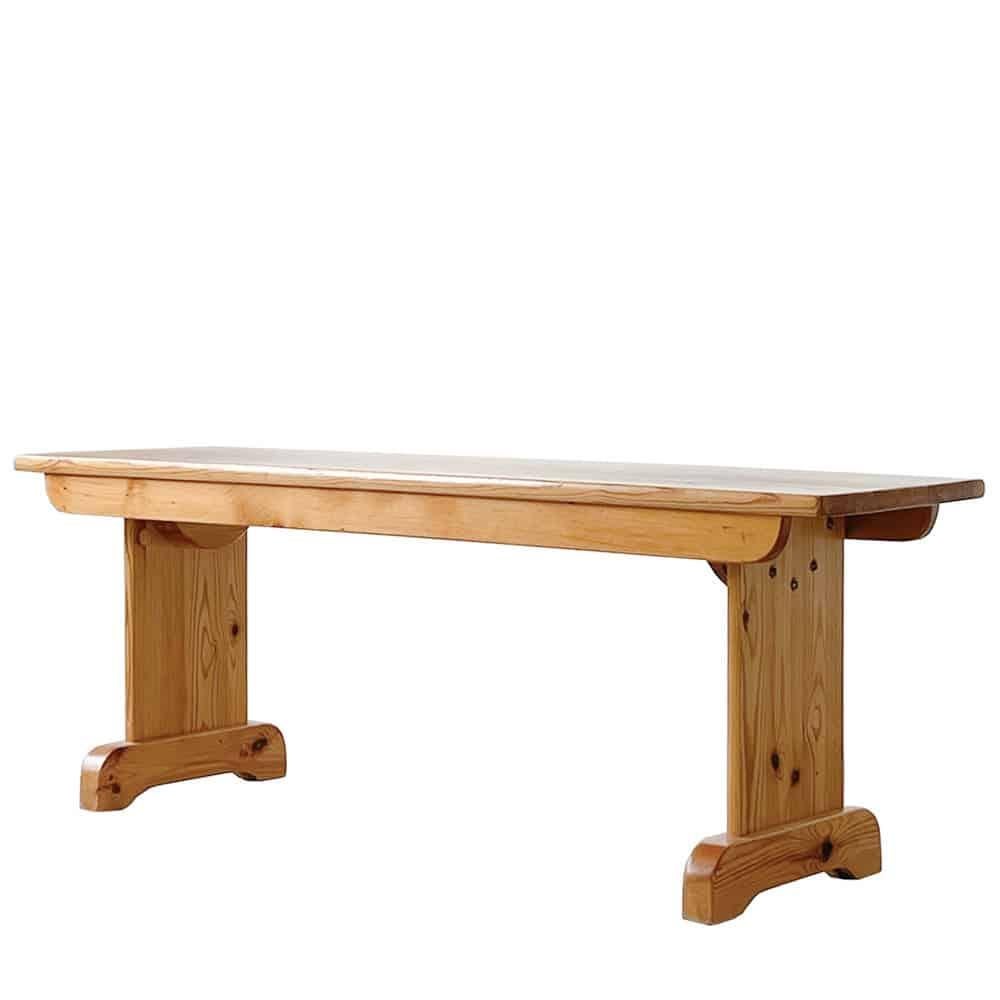 Set of Three Pine Benches or Side Tables in Campaign Style 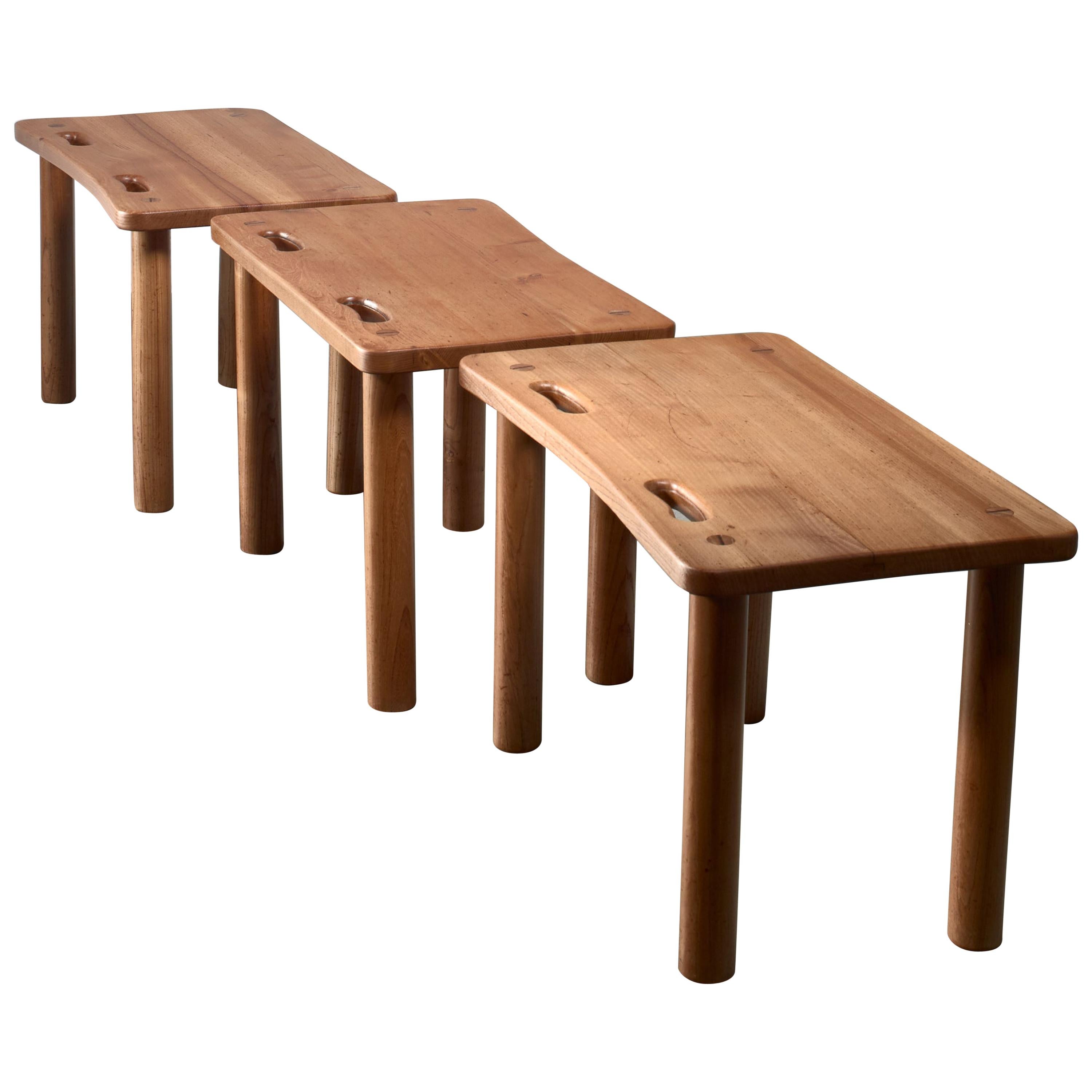 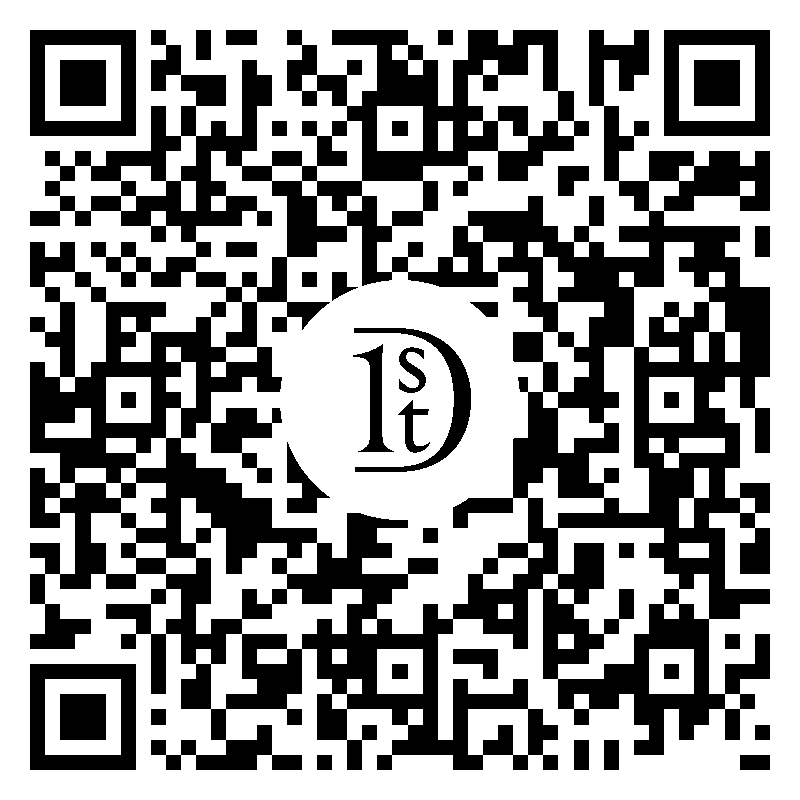 A pair of side tables or benches designed by husband and wife duo Pipsan Saarinen Swanson & J. Robert F. Swanson. Designed by their firm Swanson and Associates as part of the “Sol-Air” line for Ficks Reed Company, Cincinnati in 1949. The line was showcased at the 1950 inaugural “Good Design” exhibition at the Chicago Merchandise Mart, co-sponsored by the Museum of Modern Art. Other furniture designers of the period include Paul McCobb, George Nakashima, Edward Wormley, Charles and Ray Eames, and Harvey Probber. 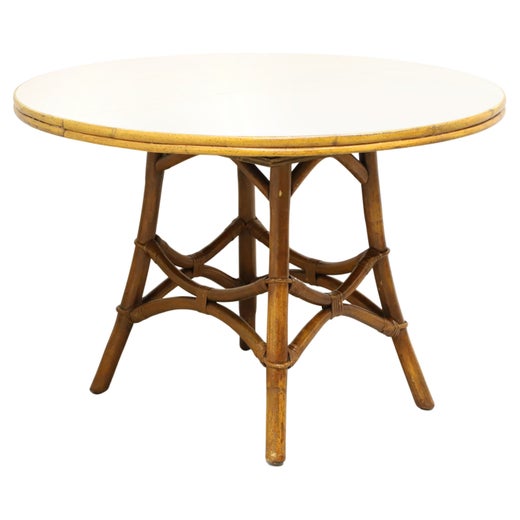 Somewhat of an overlooked icon of American design, Ficks Reed was founded by Louis Ficks in 1885 as the National Carriage and Reed Company, a New York purveyor of wicker baby carriages. By the turn of the century, however, the company had moved to Cincinnati, Ohio, and, under the auspices of Ficks Reed, began manufacturing furniture with wicker, rattan and bamboo.

Over the coming decades, Ficks Reed would benefit from an increased interest in Asian imports, as evidenced in everything from the growing popularity of chinoiserie wallpaper and Chinese porcelain to the Japanese influence in Frank Lloyd Wright’s modern architecture.

The brand was also bolstered by partnerships with several prominent architects and designers throughout the 20th century, including Paul László, Pipsan Saarinen, John B. Wisner, Paul T. Frankl and Dorothy Draper.

Each Ficks Reed partner brought their unique sensibility to the designs — Saarinen’s had skeletal frames while Draper, a largely forgotten decorator and pioneer of the Hollywood Regency style, favored more ornate detailing; László created low-slung seats — but all were rendered in the company’s signature wicker and bamboo. Thanks in large part to the Draper relationship, Ficks Reed furniture has long been a fixture at The Greenbrier and Colony hotels, as well as other luxury properties including the Four Seasons, Ritz Carlton resorts and The Breakers in Palm Beach. In 2006, Draper protégé Carleton Varney continued his mentor’s legacy by debuting a new 20-piece collection for Ficks Reed based on her original designs.

A recent resurgence in the popularity of wicker and rattan has given way to newfound demand for Ficks Reed furniture in the secondary market, where original vintage pieces are often refinished, repainted or lacquered to further underscore the textural detail of their bamboo and rattan frames.

About the Seller
5.0
Located in West Palm Beach, FL
Recognized Seller
These prestigious sellers are industry leaders and represent the highest echelon for item quality and design.
Platinum Seller
These expertly vetted sellers are 1stDibs' most experienced sellers and are rated highest by our customers.
Established in 2017
1stDibs seller since 2017
1,314 sales on 1stDibs
Typical response time: 1 hour
More From This SellerView All
You May Also Like