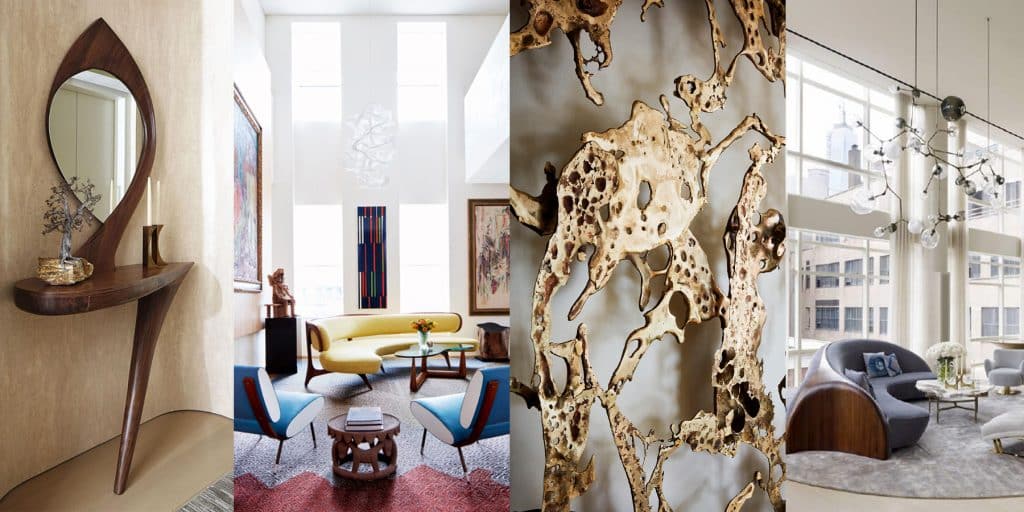 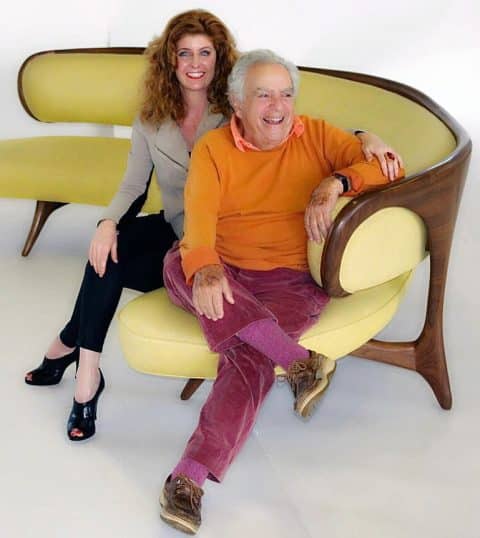 January 12, 2020Interior designer Amy Lau (above left) often collaborates with makers, such as the late Vladimir Kagan (above right), on custom pieces for clients’ homes (portrait courtesy of Amy Lau Design). At top are the results of four collaborations: from left, an entryway table by Michael Coffey, (photo by Bjorn Wallander), a rug by Hechizoo, a room divider by Silas Seandel and a double-sided sofa by Kagan (photos by Thomas Loof).

Designer Amy Lau doesn’t like to be pigeonholed. One of New York’s most celebrated interior designers, she has long been noted for her smart use of mid-century modern pieces. But that’s hardly her only area of expertise. She often works with furnishings from the early 20th century as well as the 21st. A friend and patron of some of the most accomplished contemporary makers, she does more than just acquire their work for her clients — she also collaborates with them to create custom pieces. For the makers, she notes, “it’s an opportunity to do what they’ve always dreamed of doing.” Lau’s clients, meanwhile, end up with one-of-a-kind items. “These are the heirlooms of the future,” she says. “And if I’ve chosen well, some of them may end up in museums.”

Here are the stories of four of her most memorable collaborations. 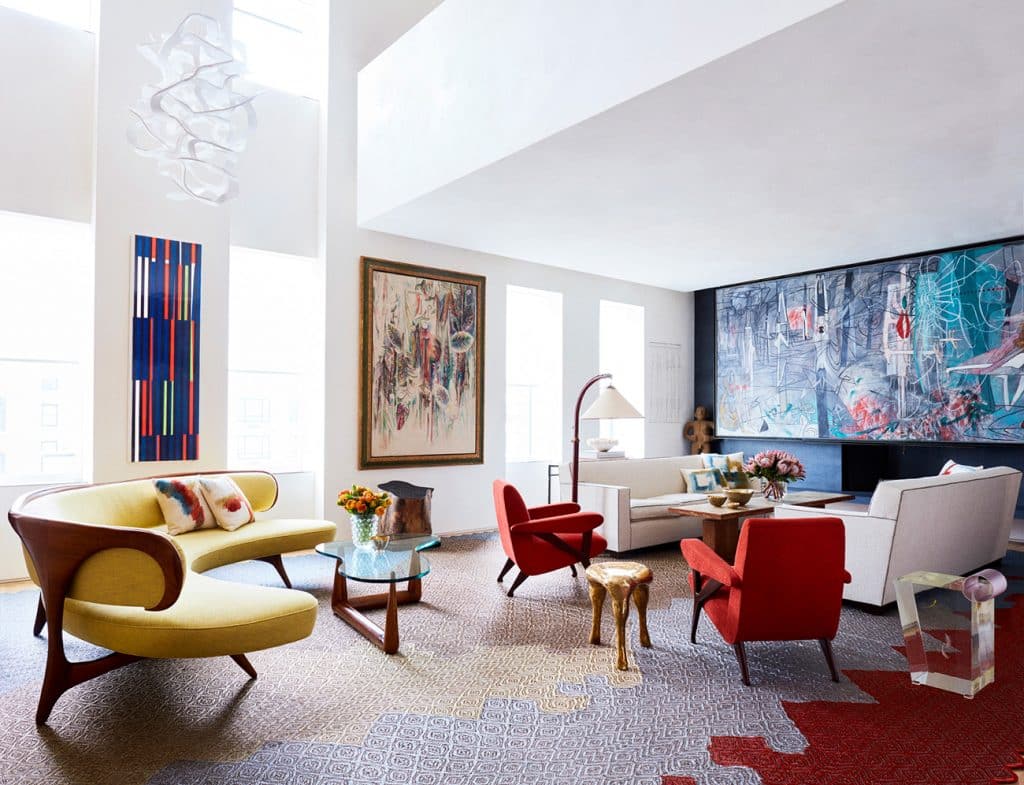 The palette of an Upper East Side home’s living room rug — on which Lau worked closely with Hechizoo artist Jorge Lizarazo, based in Colombia and represented in New York by Cristina Grajales Gallery — was inspired by the hues of the artworks by Roberto Matta and Wifredo Lam displayed on the walls. The furniture includes pieces by T.H. Robsjohn-Gibbings, the Haas Brothers, Jean-Michel Frank and Ico Parisi. Photo by Thomas Loof

A couple with an outstanding collection of Latin American art tasked Lau with designing their Upper East Side apartment, in whose living room they planned to display a large surrealist painting by Roberto Matta plus two smaller works, by Wifredo Lam and Diego Rivera. Lau and her clients decided to commission a rug that, she says, would “complement but not overpower” the art. She turned to Colombian artist Jorge Lizarazo, who established Hechizoo Textiles in Bogota in 2000 and is repped in New York by Cristina Grajales. Trained as an architect (and a veteran of the offices of Santiago Calatrava and Massimiliano Fuksas), Lizarazo is a self-taught weaver who often incorporates gold, silver and copper fibers into his rugs. He describes his pieces, which have the power to alter how spaces are perceived, as “soft architecture.”

The rug that Lau and Lizarazo (left) came up with took over a year to weave and more than 12 people to install. Incorporating several miles’ worth of copper-, gold- and silver-covered wire, it weighs several tons. The carpet’s color blocks were adjusted to suit the arrangement of the furniture. In the living room (center) a pair of Giò Ponti lounge chairs and a large painting by Diego Rivera complement the rug’s rich hues. Photos courtesy of Amy Lau Design

Lau and Lizarazo worked to create an asymmetrical color-block design based on the palette of the three paintings, adjusting the blocks as she created a furniture arrangement for the room. The various expanses of color became settings for some of the key pieces, including rare blue-and-white Giò Ponti lounge chairs. “I needed to see how the colors read in relation to each piece of furniture,” says Lau. At the last minute, the pair decided against their original plan of edging the rug in a single color and instead created borders consistent with the adjacent color blocks. Incorporating miles of copper-, gold- and silver-covered wire, the rug, which took more than a year to weave, weighs several tons and required more than a dozen people to install. 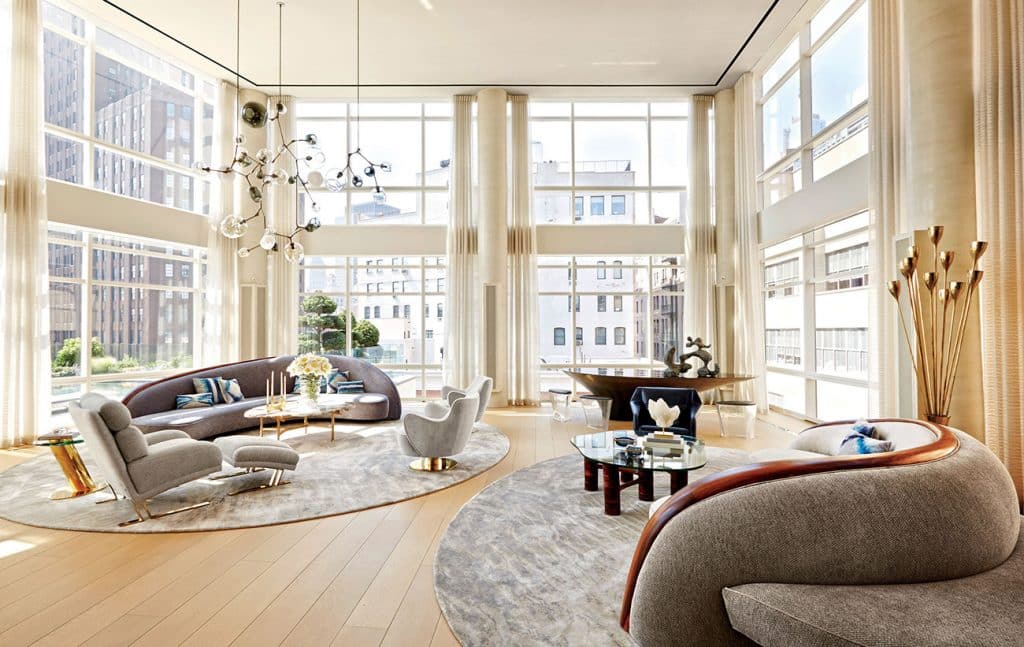 When working with clients in Tribeca in 2012, Lau collaborated with Kagan, who died in 2018, on a custom pair of his signature swooping double-sided sofas. A Lindsey Adelman Bubble chandelier hangs above the far sofa, while a 1940s Italian floor lamp stands next to the near one. Photo by Thomas Loof

Few furnishings invite guests to circulate through a room like Vladimir Kagan’s swoopy seating. So, in 2012, when designing the cavernous Tribeca living room of a client who likes to entertain, Lau decided to create furniture groupings featuring a pair of the designer’s double-sided sofas. Kagan, who died in 2016 at the age of 88, had done other back-to-back sofas, but none as lavish as the ones she had in mind. “I wanted to see Vladi do something he had never done before,” Lau says, adding that he sketched some 30 concepts, many at his house on Nantucket, where “we did our best collaborative work.” The two presented five of their favorite ideas to the client, who selected a design with elegant woodwork reminiscent of Art Nouveau furniture. That was hardly the end of the creative process, however. To get the dimensions of the sofas right, Lau and Kagan made paper templates, which they unfurled on the floor of the client’s living room. “I’d be down on hands and knees,” she says, “and Vladi would be saying, ‘A little more there. A little less here.’ ” After finalizing the measurements, Lau, Kagan and the client reconvened at the Clifton, New Jersey, factory where the pieces would be built. There, they consulted with the artisans who carved the walnut elements and sculpted the latex foam that forms an initial layer of cushioning, beneath cotton batting and down. By then, Lau had chosen the fabrics: The seats facing into the room are covered in a silk velvet blend; those facing out in a linen, wool and chenille blend from Nantucket Weavers. She and the client were together again when the sofas — designed by Kagan to be easily assembled (and someday disassembled) — were hoisted into the living room in pieces. 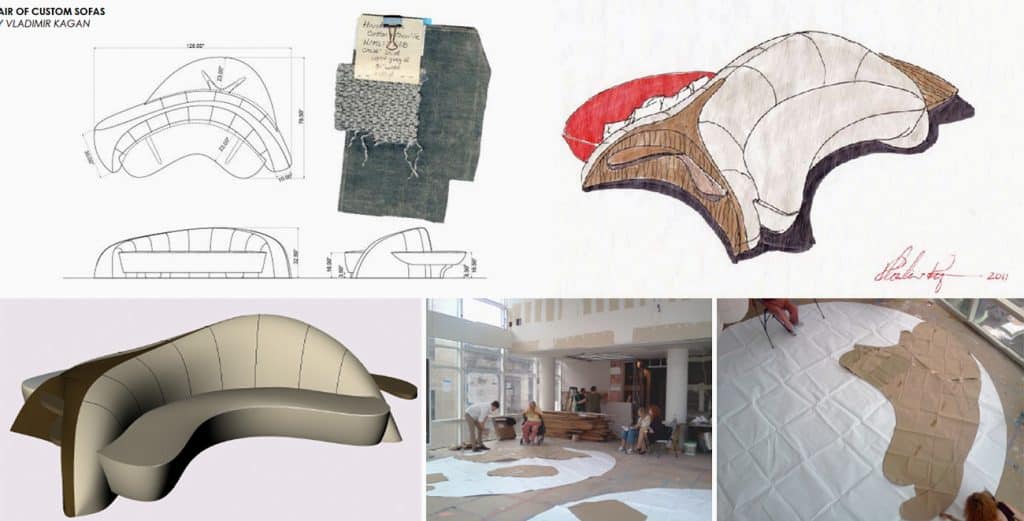 The design went through more than 30 iterations before Kagan, Lau and the clients found what they considered the ideal form. Photos courtesy of Amy Lau Design

An Entry Table by Michael Coffey 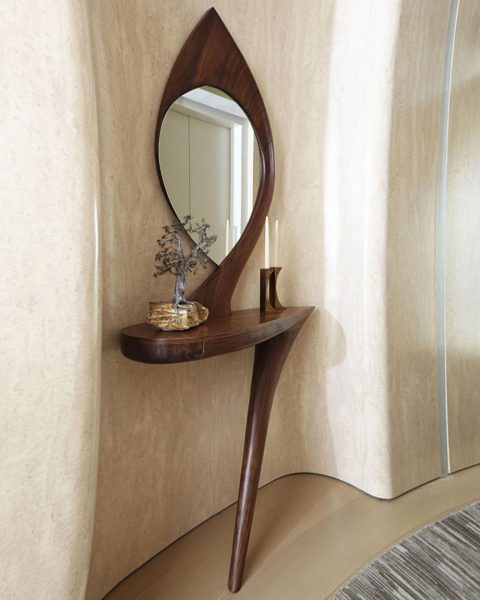 For a niche in the foyer of the Tribeca apartment, Coffey created a small but dramatic table. Supported by single leg, it incorporates a teardrop-shaped mirror and two drawers, one of them hidden. Photo by Bjorn Wallander

“I knew there had to be a ‘wow’ when you walk in the door,” Lau says, referring to the foyer of the same Tribeca apartment for which she’d commissioned the Kagan sofa. That meant filling a small niche with an eye-catching hall table. After reviewing a list of artists, she and her client selected Michael Coffey, who has been making custom wood pieces, many with surfaces resembling topographic maps, for more than 60 years. “Symmetry is dull. Asymmetry wakes us up,” Coffey, who is based in western Massachusetts and represented by Maison Gerard, has said. “Security is boring. Risk is exciting. Straight lines are safe. Curves echo the wildness and spontaneity of nature.”

True, but this piece’s final form wasn’t entirely spontaneous. Lau and Coffey decided that an early design — a simple floating-drawer console — “wouldn’t look grounded enough,” she says, so they developed a concept for a black walnut table that balances on one leg while supporting a large teardrop-shaped mirror.

The finished piece is more than seven feet high. Given the generously proportioned leg and expanse of glass, “a thin tabletop would have looked anemic,” Coffey explains. But thick slabs of wood are prone to checking — a splitting of the surface. A common solution is to hollow out the wood. “I hate wasted space,” says the designer, who decided to kill two birds with one stone. He installed two drawers, one visible, the other hidden, in the tabletop. “What home doesn’t need a secret place to hide things?” 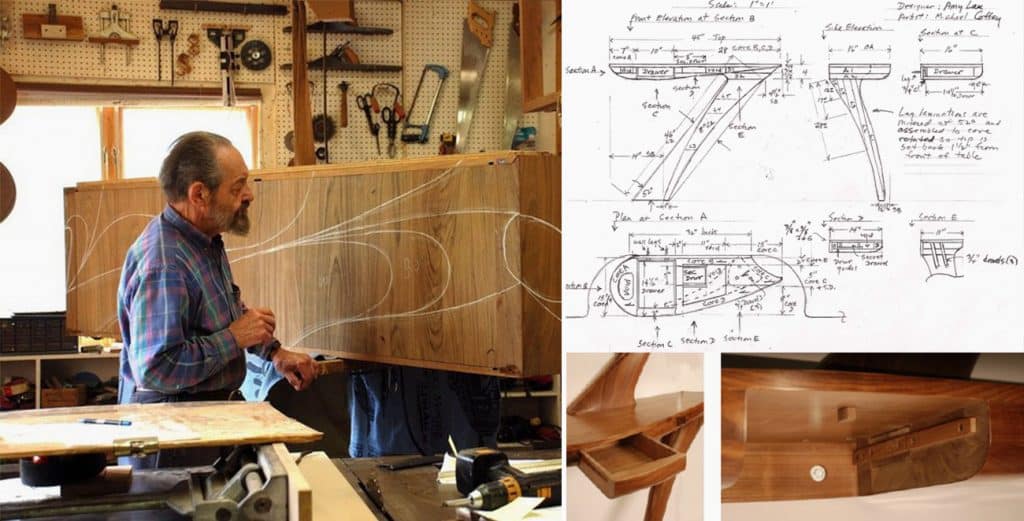 Coffey (left), who lives and works in western Massachusetts and is represented by New York’s Maison Gerard, has been making his wood furnishings for more than 60 years. “Symmetry is dull,” he has said. “Asymmetry wakes us up. Security is boring. Risk is exciting. Straight lines are safe. Curves echo the wildness and spontaneity of nature.” Photo courtesy of Amy Lau Design

Most hall mirrors have four-sided frames. “But is this nervous attention really needed?” Coffey asks. “Glass, in fact, is one of the strongest materials. Having been brought up in a bohemian family, I never accepted the rules of society without a fight.” For his version, Lau recalls, Coffey “made many mock-ups to help us determine the right relationship of wood to glass. We decided to let the edge of the mirror float to give the piece a light appearance.” As Coffey worked, Lau recorded his words and retained all his sketches, which are remarkably detailed. “I knew it would be a highly collectible piece,” she says. “So I wanted every aspect of it documented.”

A Room Divider by Silas Seandel 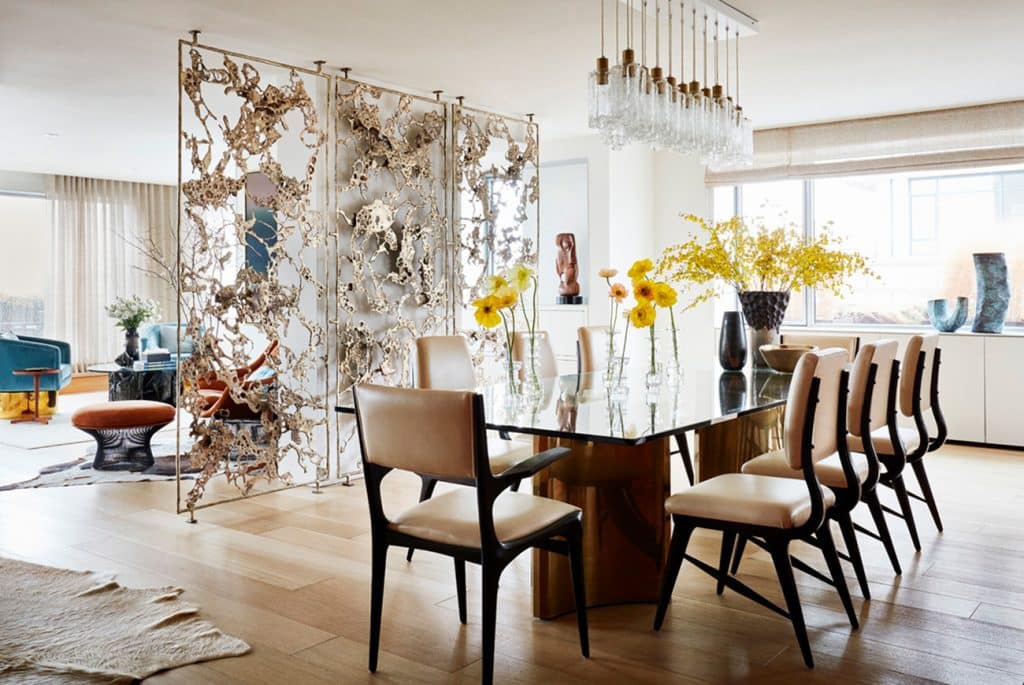 Lau commissioned Seandel to design a screen to serve as a divider in the capacious main room of an apartment on Manhattan’s East End Avenue. The piece needed to accomplish the neat trick of separating the living and dining areas without limiting the light coming into the space through the wall of windows. Carlo de Carli dining chairs surround a table whose top is supported by a pair of vintage Mastercraft bases. Furnishings in the living room include a vintage Warren Platner armchair and ottoman, Paul Evans coffee table and Leon Rosen swivel chairs. Photo by Thomas Loof

Designing an East End Avenue apartment with a spacious main room, Lau wanted to establish just enough separation between what would be the living and dining areas. But she didn’t want to block the light streaming in through the room’s wall of windows. That meant she needed a room divider with a lot of openings. In the Chelsea studio of metal artist Silas Seandel, Lau saw a coffee table with a bronze filigree element that made her think “of Jackson Pollock taking bronze and flicking it on the floor,” she recalls, adding, “I fell in love with the technique.” Seandel doesn’t actually “flick” bronze, instead pouring it into molds that form the metal into shapes resembling lace cookies. Lau and Seandel began arranging pieces left over from other projects into a mock-up for a three-panel room divider providing the desired degree of opacity. Realizing that the panels would have to present a finished surface to both sides of the room they divide, the designers placed pieces back-to-back, separated by about an inch. 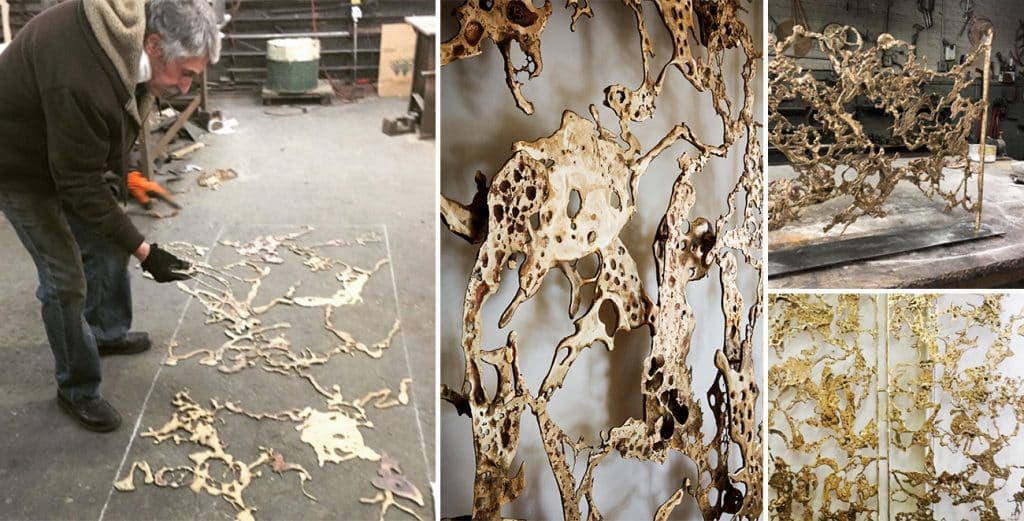 The idea for the screen was suggested to Lau by the bronze filigree element of a table she saw in the studio that Seandel (left) keeps in New York’s Chelsea. It called to mind “Jackson Pollock taking bronze and flicking it on the floor.” That concept turned into the two-sided, three-panel screen. Photos courtesy of Amy Lau Design

Presented with the concept, the clients were initially skeptical. “It was hard for them to visualize how it could be different on each side,” Lau explains. She made a mock-up out of paper, which helped convince them that the piece would work. The clients became so enthusiastic, in fact, that they started calling Seandel with ideas for the room divider. “They loved being part of the creative process,” she says.