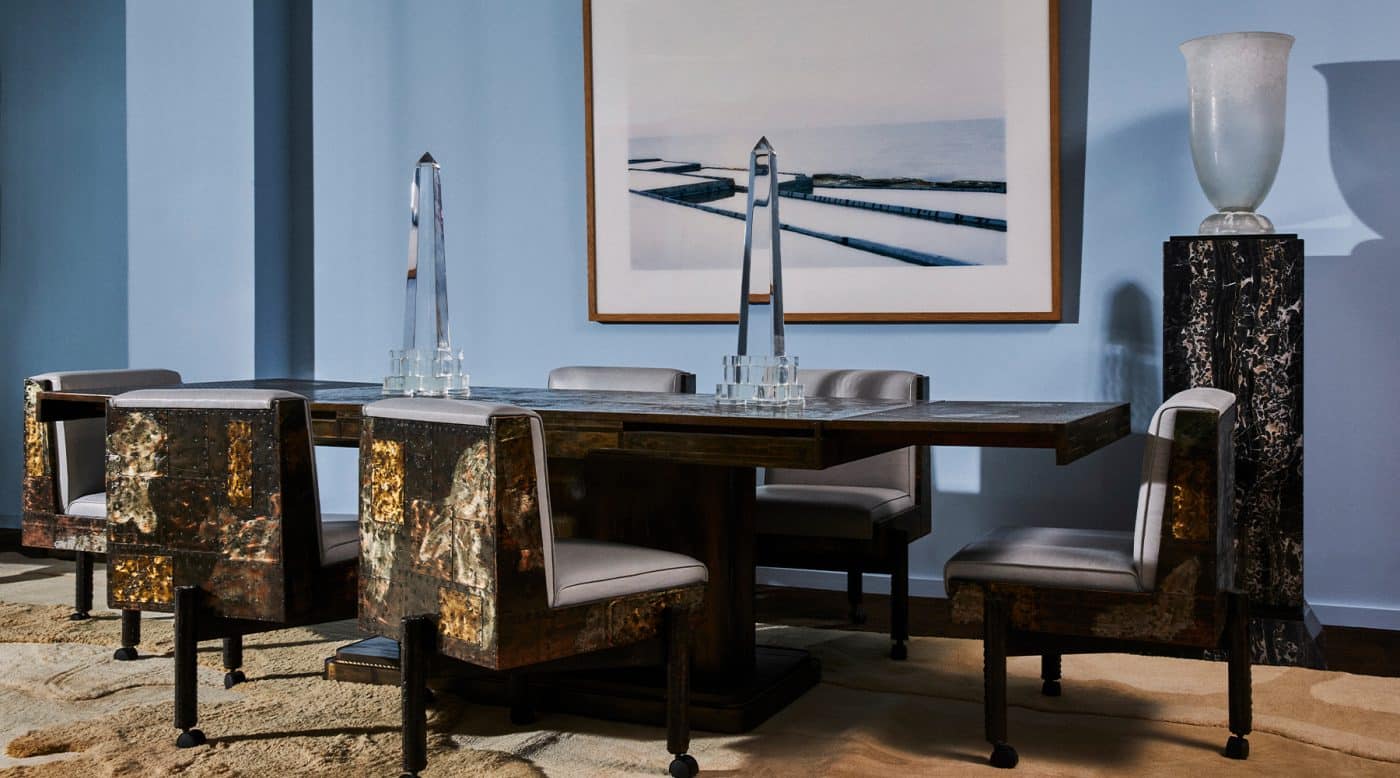 October 17, 2021As many furniture dealers shift their focus to contemporary design, Evan Lobel of New York–based Lobel Modern is offering something different by zeroing in on what he loves most: stunning examples of 20th-century design.

“I decided to double down on super-high-end twentieth-century pieces by only the best designers — people like Paul Evans, Karl Springer and Philip and Kelvin LaVerne,” says Lobel, “and really only show their very best work.”

To bring his vision to life, Lobel opened a new gallery space this summer across the hall from his main showroom in the New York Design Center, on Manhattan’s Lexington Avenue. There, he presents a curated collection of his most spectacular finds with the kind of breathing room normally reserved for fine-art exhibitions. “It’s a way to see those blue-chip pieces where they’re not just piled on top of each other” as they are in many showrooms, he says. “It’s really more like an art gallery.”

This is just the latest initiative from a smart, passionate dealer who prizes the stories behind the pieces — and the histories of the designers who created them — as much as the objects themselves. Lobel’s interest in furniture design developed organically. He grew up on New York’s Long Island and studied veterinary medicine in college before switching to international economics. After graduation, he landed his first job, at a hedge fund. Over the course of 10 years, he gradually rose through the ranks at the firm, from an entry-level position to that of chief financial officer — before realizing something wasn’t quite right.

“Although the money was great, there was nothing about it that nourished my soul,” says Lobel, who used his earnings to begin amassing a personal collection of vintage furniture while learning about design from dealers like Liz O’Brien and Paul Donzella. “I just wasn’t happy there and wanted to do something more creative and fulfilling, where I could talk to kind-hearted people in a beautiful environment.”

By 1998, he had resigned and opened his first furniture showroom in Manhattan. In the years that followed, he cultivated a devoted clientele — including some of the world’s most prominent interior designers — by learning and sharing all he could about the revered masters and unsung heroes of 20th-century design. With a scholarly approach to collecting and a nose for a good story, Lobel didn’t just buy and sell furniture; he also combed through archives and conducted extensive interviews to create a knowledge base for the pieces in his inventory.

“I’m very research-oriented and kind of a nerd at heart,” he says. “I really want to educate myself and learn about each designer: Where did they come from, who influenced them, and why do their designs stand out?” As a result of his dogged investigations, Lobel has been tapped to help curate exhibitions on designers like Harvey Probber and is widely credited with reviving interest in Karl Springer. He is currently at work on a book about father-and-son team Philip and Kelvin LaVerne, in partnership with Kelvin.

“Evan is an outstanding dealer, with an encyclopedic knowledge of twentieth-century furniture,” says Ellie Cullman, cofounder of New York–based design firm Cullman & Kravis Associates, who has been buying from Lobel for nearly two decades. “And he makes shopping fun. I recently had a client who was looking at a LaVerne table and questioned its stability. Without missing a beat, Evan jumped on the table, performed a few dance moves and proved that the table was totally solid.”

At his new gallery space, Lobel is focusing on investment-grade furniture. Among the pieces recently on view is the Punto ’83 table by Italian designer Gabriella Crespi. The breakthrough work is composed of swiveling flower-petal-shaped stainless-steel-mesh panels that form a stepped, circular tabletop; a pump mechanism in the pedestal base allows the whole surface to be raised or lowered. It’s the kind of piece collectors won’t find anywhere else — because it’s the only one in existence.

Then, there is the 1960s K’ang Hsi extension dining table by the LaVernes, which has two pullout leaves emblazoned with Chinese symbols representing good luck, prosperity, longevity and happiness. The designers, who described their work as “functional art,” made a limited number of these etched and patinated pewter-and-bronze tables a half century ago, and the piece is among the duo’s largest and most laborious creations.

Paul Evans fans will find treasures like a much-coveted Sculpture Front cabinet, with deeply textured and multicolored metal ornaments, from 1979; a flawless faceted walnut-burl-and-brass credenza from 1965; and hand-welded Patchwork dining chairs made of copper, pewter and bronze in 1967. “He was just so inventive and always coming up with incredible forms that were incredibly hard and time-consuming to make,” Lobel says of Evans. “That’s what makes these pieces so special.”

Karl Springer, of course, is also well represented, recently by a 1986 Coromandel folding screen, with undulating carved grooves lacquered in silver and gold, and a 1970s embossed-leather square-leg game table with a concealed backgammon board.

Along with the furniture, Lobel is now showing and selling select pieces of contemporary art, including works by Andy Warhol, Stanley Boxer and Elger Esser. “It enables me to curate the art with the furniture, which is also art,” he says. “So it’s an immersive experience.”

In an age when editing is more important than ever, Lobel’s approach to exhibiting his most valuable works appears to be a winning formula. “The reaction from the designer community has been overwhelmingly great,” he says, noting that he is continually changing the mix as pieces get snapped up by designers who come to admire them with their clients. “It’s just been incredible.” 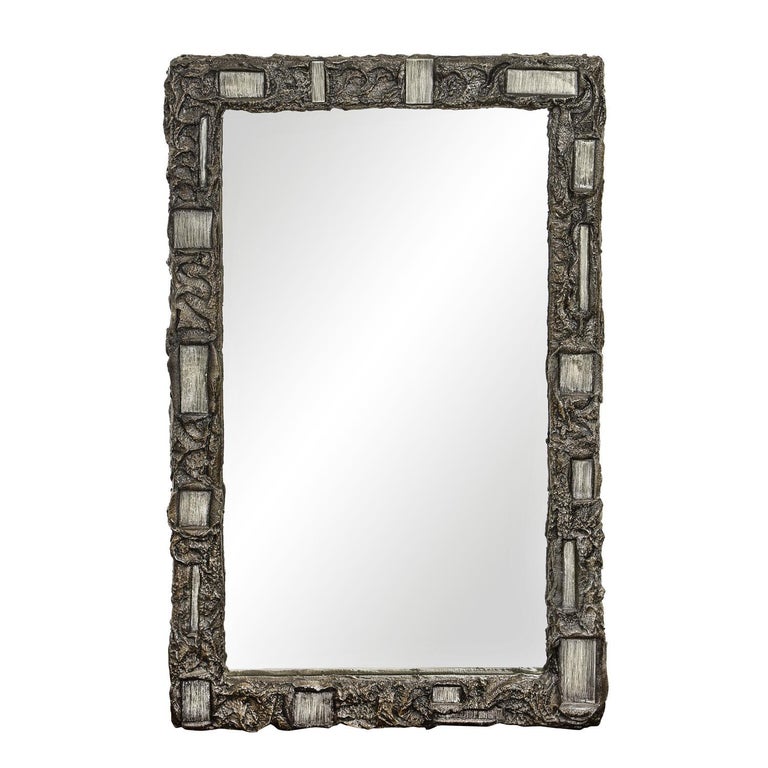 “This mirror is incredibly rare. You mostly see this design in case pieces like cabinets or credenzas. The combination of bronze resin and enameled steel makes this a true work of art. I purchased it from the original owner along with a wall-mounted cabinet, which is available too.” 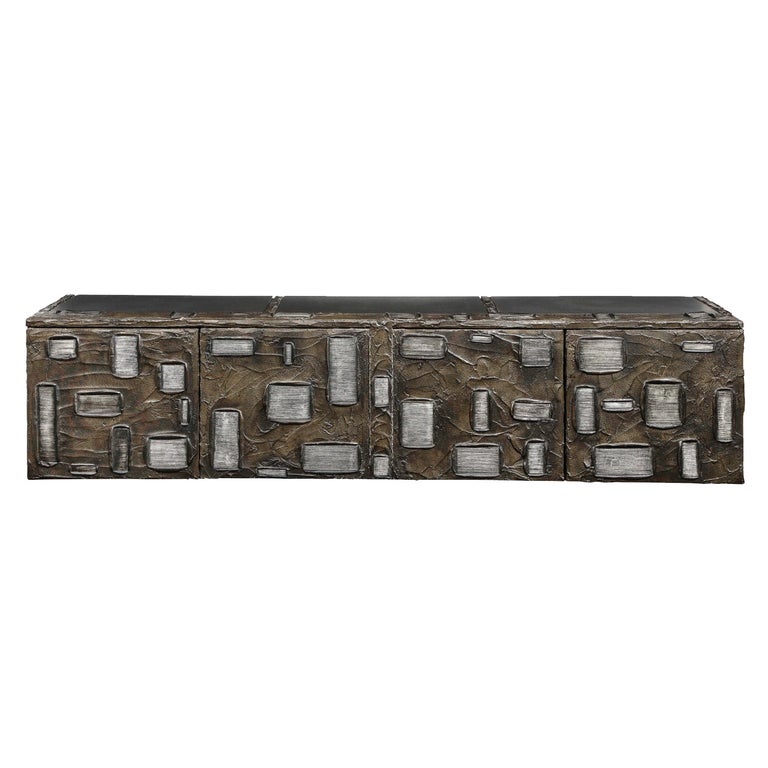 “This cabinet came with the mirror. The series shows Evans’s dedication to artisanship and unique materials and forms — a remarkable piece.” 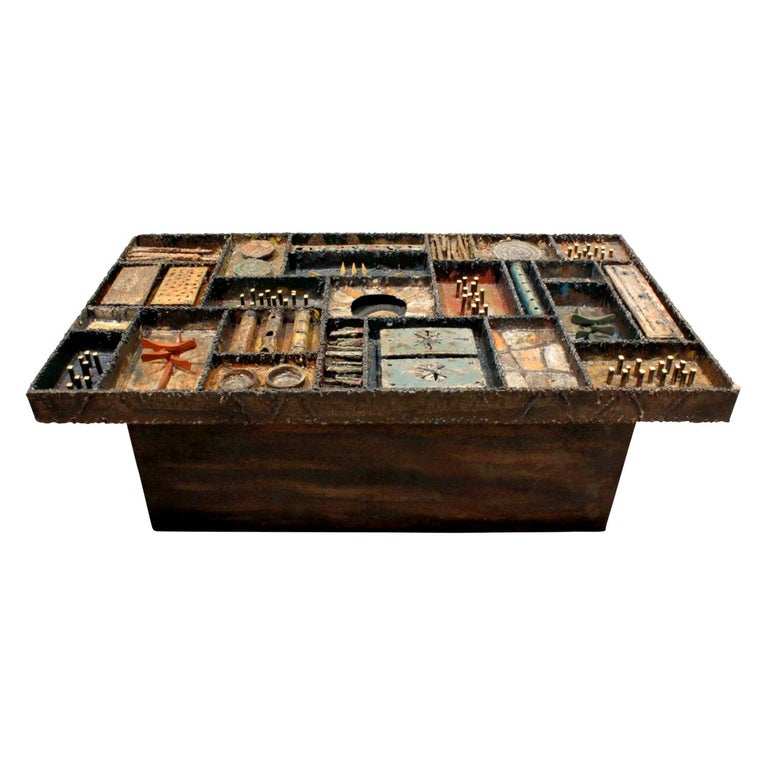 “Kept under glass for its entire life, this incredible hand-welded table is in like-new condition. It was purchased from the original owner, and we are proud to have it in our exhibit gallery.” 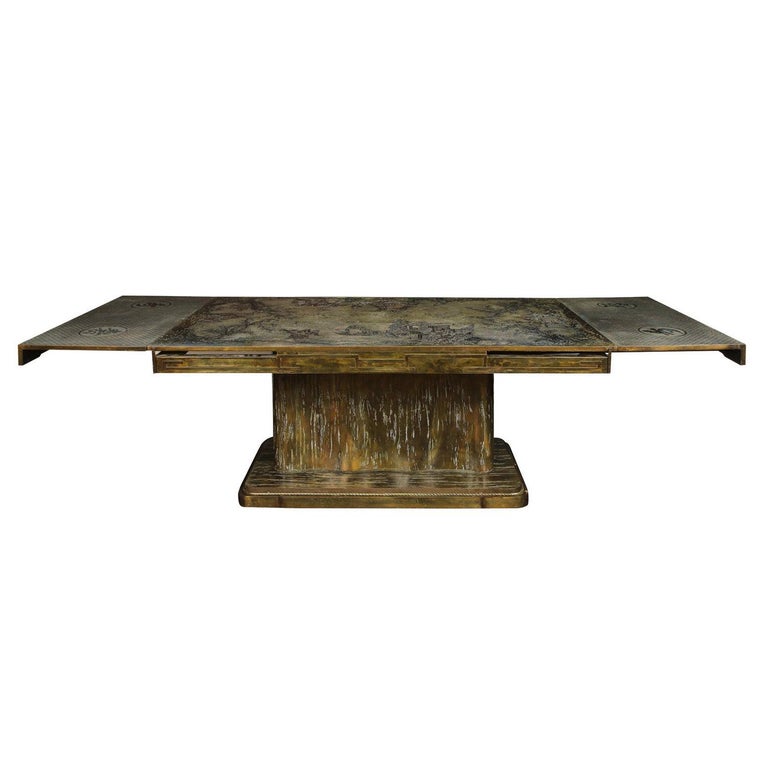 “This table is nothing short of a masterpiece. It has a joyous historical scene etched into the top. To get the right patina, the parts were buried in special soil for months and then unearthed and hand-painted. The mechanism that lifts and locks the leaves was engineered by the LaVernes and patented by them. A very small number of these were made, according to Kelvin LaVerne.” 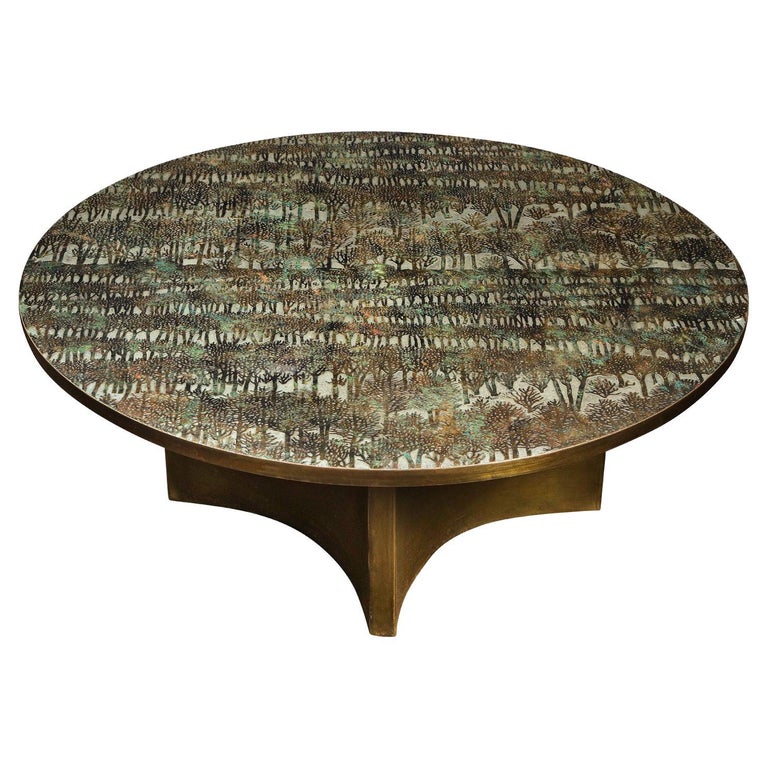 “This is certainly one of the LaVernes’ most enchanting tables. With its organic forest motif on top and beautifully painted enamels, it never fails to impress.” 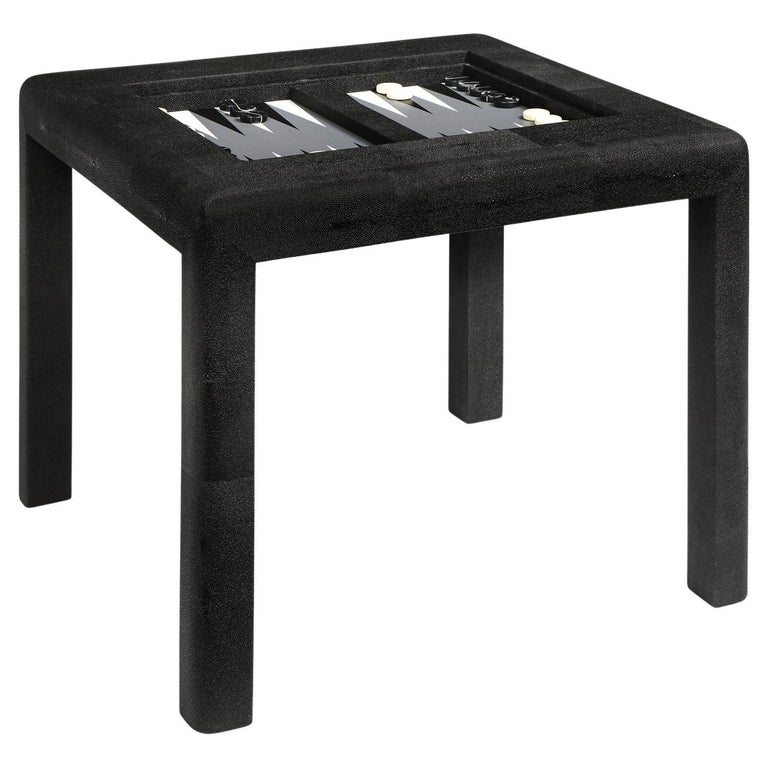 “Springer’s use of the finest materials and craftsmanship makes his pieces works of art and very sought after today. Black shagreen is extremely luxurious, and this design, with both a backgammon table and a chessboard/checkerboard inside, is wonderful.” 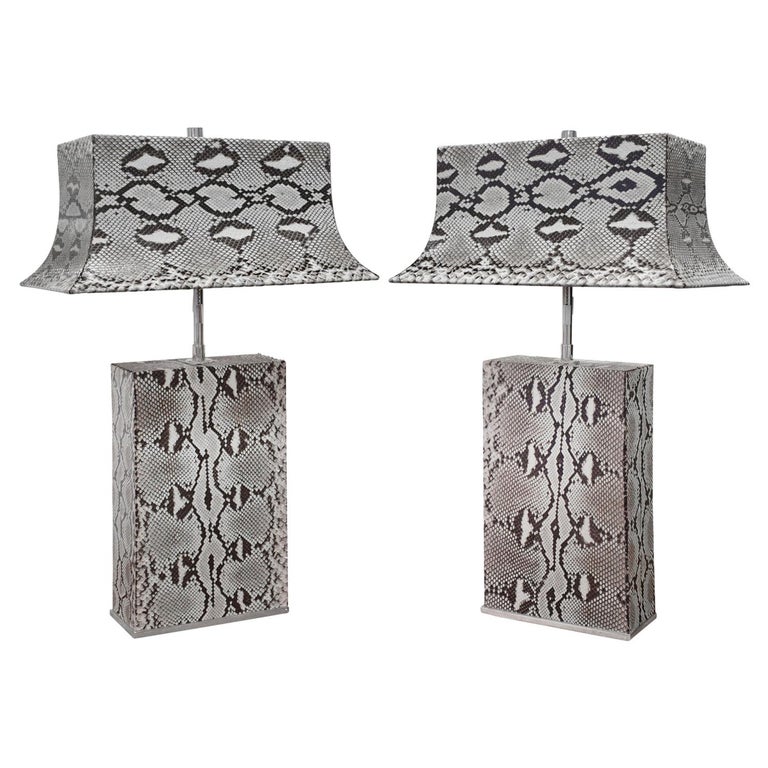 “These lamps are exquisite. Completely covered in python with chrome accents, they are meticulously crafted and as striking today as the day they were made.” 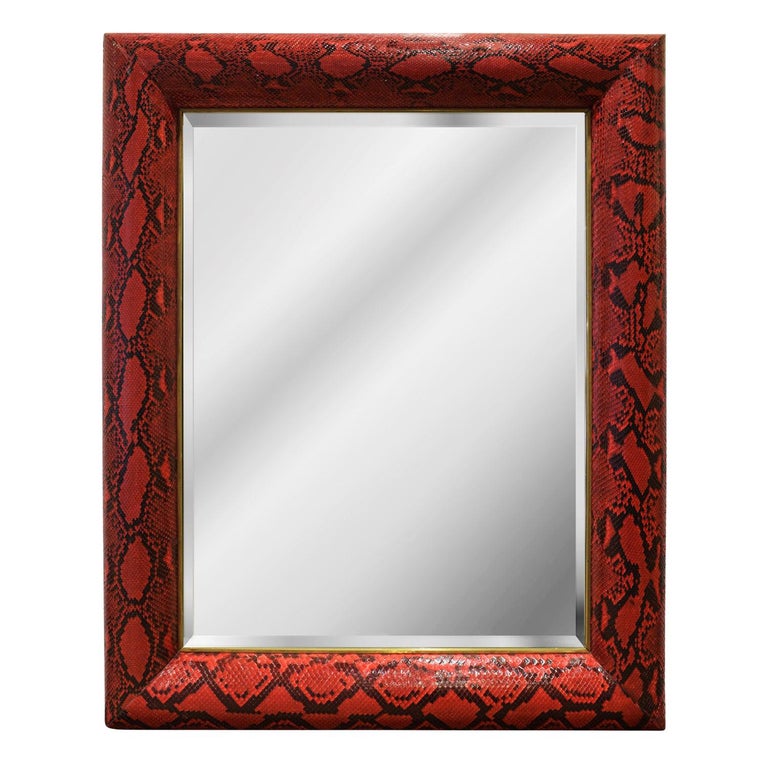 “Springer created some of the most memorable pieces of the nineteen seventies and eighties. This mirror is impressive in scale and a great example of his work.”