What the Rascally Postmodern Studio Memphis Milano Is Up to Today 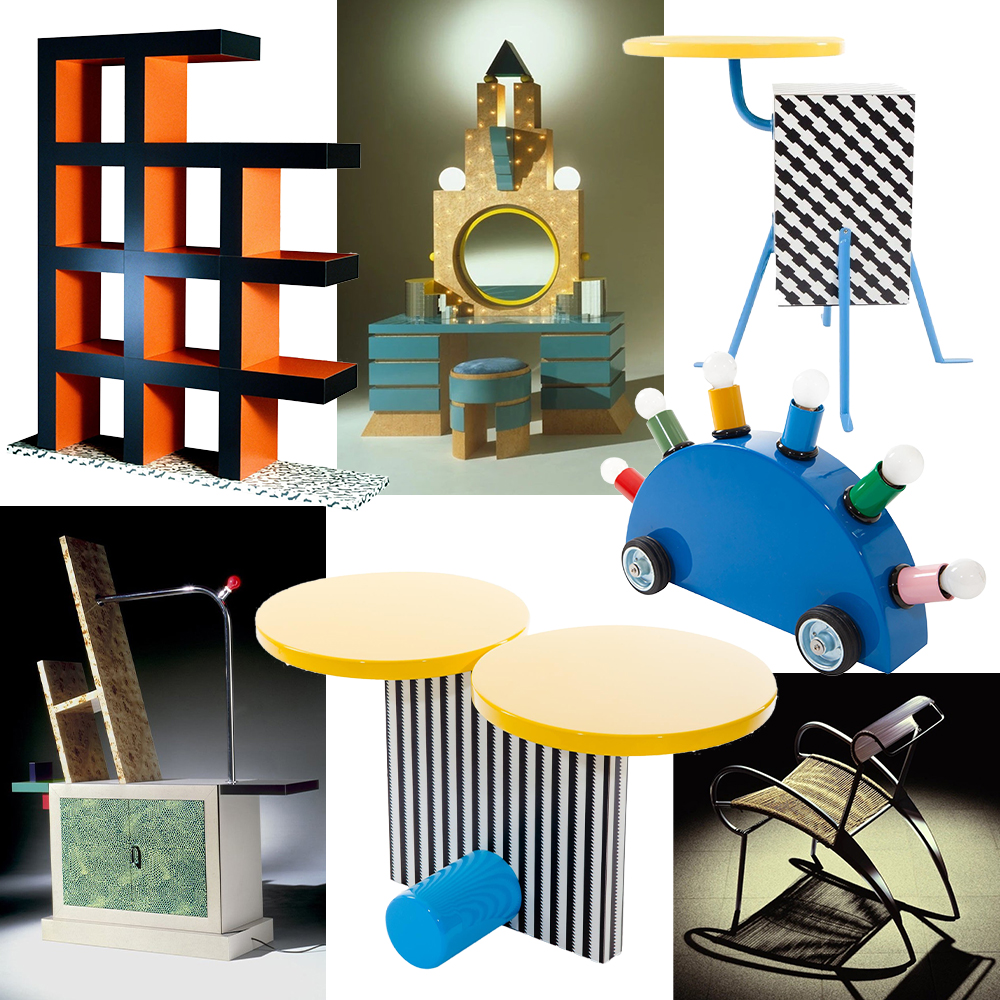 The keeper of the Memphis flame, Alberto Bianchi Albrici, explains all the nuances of Italy's boldest, brashest postmodern design movement.

January 16, 2021It’s September 2021, and the first Salone del Mobile and Fuorisalone is taking place in Milan since the onset of the pandemic. The fairground at Rho, beyond the city’s outskirts, is hosting about a quarter of the Salone’s usual exhibitors, but the mood is euphoric. And in the Brera design district, it almost looks like any other year. Of course, there are masks, crowd regulation in the showrooms and fewer air kisses. But the sidewalks teem with stylishly dressed design aficionados.

In a small triangular piazza on Largo Claudio Treves, just inside a Renaissance-style portal, is Memphis|Post Design Gallery, the contemporary home of the extraordinarily influential Memphis Milano design movement and its offspring: Meta Memphis and Post Design. Gallery owner Alberto Bianchi Albrici, the keeper of the Memphis flame, is nervous and a little harried. A constant flow of visitors — collectors, newbies to the style, friends — circulates through the rooms, demanding his attention.

“People might not notice, but the galleries are not perfect, the way I want them to look,” Albrici says apologetically. He concedes, however, that the joy of gathering again to celebrate design is palpable. “It has been quite a long time since we’ve had visitors.”

Albrici is a surprisingly understated presence in these rooms, where the eye-popping colors and angular shapes of the postmodern Memphis style clash with classic herringbone floors, tile hallways and ornately carved moldings and door lintels.

Tall, with a shock of gray hair and moist blue eyes, he wears navy slacks and a starched white shirt. The monogram on the latter sits mischievously below the pocket rather than on its rim, a sartorial tweak perfectly aligned with the insouciant, let’s-shake-things-up spirit of Memphis.

Memphis Milano, the official name of the movement and the company, was born the evening of December 11, 1980, when a group of designers met in Ettore Sottsass’s living room to foment what became a design revolution. The group — which also included Martine Bedin, Andrea Branzi, Aldo Cibic, Michele De Lucchi, Nathalie du Pasquier, George Sowden, Matteo Thun and Marco Zanini — debated what the next aesthetic innovation should be along the design continuum as the strains of Bob Dylan’s “Stuck inside of Mobile with the Memphis Blues Again” looped in the background, bestowing on the movement a name that also referred to Egypt’s ancient capital.

“They opened a new door to something never seen before,” says Albrici, who was managing director of the company for 10 years before buying it outright in 1996. “People started to understand a table could be triangular, that you could use plastic laminates instead of veneer. You could mix materials in new ways and paint furniture with graffiti.”

The first Memphis Milano group — which expanded to include designers Michael Graves, Shiro Kuramata, Alessandro Mendini and Paola Navone, among many others — introduced 55 creations during the September 1981 Salone. Among them were the Carlton room divider, a colorful totemic bookcase by Sottsass; and Ginza, a robot-shaped shelving unit by Masanori Umeda that incorporated plastic laminates. The group debuted new collections annually until 1988, three years after Sottsass, its guiding light, formally left it.

“Ettore said to me, ‘I was lucky to make one revolution, and you’re asking me to do many revolutions,’ ” Albrici recalls. “And he was right.” The decision was made to create Meta Memphis, a new brand focused on work produced by artists rather than designers. These were poetic pieces — many of them limited editions or one-offs — that barely nodded to functional furniture, conceived by such art world names as Alighiero Boetti, Sandro Chia, Joseph Kosuth, Mimmo Paladino. This brief iteration came to a close in 1991.

The black-and-white-striped borders of the pieces, particularly the bed, are a direct reference to Umeda’s Tawaraya ring from 1981, a boxing ring/conversation pit made of colorful silks and tatami mats. There are also new ceramics and carpets from Roger Selden and historic Memphis designs from Cibic and Umeda.

Albrici refuses to call any new manifestations of older designs reissues. “Some products,” he explains, “went out of production, but they’re not technically reissues, because if ten years ago, someone would have asked me to produce it, I would have.”

He is also strict about terming only those designs created under the Memphis Milano label between 1981 and 1988 authentic Memphis Milano. This attempt to set rigid boundaries to the movement’s domain is a source of some contention with regard to Memphis Milano, Meta Memphis and Post Design, but particularly Memphis Milano.

“I must keep the collections divided,” Albrici says, explaining his primary mission these days. “They are completely different histories.”

The 2016 Sotheby’s auction of David Bowie’s Memphis collection in London, the Metropolitan Museum of Art’s Sottsass retrospective the following year and various other exhibitions currently on tour, as well as the championing of the style by 21st-century designers such as Kelly Wearstler, have led to all sorts of “inspired by” products that put new spins on the colorful, graphic geometries and sense of humor of the style. Yves Saint Laurent’s Anthony Vaccarello recently commemorated the 40th anniversary of Memphis with a new Rive Droite collection that borrows the movement’s mix of bright fields of colors with checkerboard and leopard patterns.

To muddy the waters even further, many designers associated with Memphis Milano created similar works for other companies. Sottsass himself produced Memphis-esque ceramics for Italian pottery company Bitossi, which Albrici does not consider to be Memphis.

As the steady stream of visitors to the gallery attests, however, there is no question that the postmodern movement that sprang from that momentous gathering in Sottsass’s living room four decades ago remains vibrantly in vogue. Albrici admits to experiencing some “dark times” about five or six years ago, when Memphis seemed destined to become a footnote along the design timeline. But, he says, “now, again, is the time for color!” 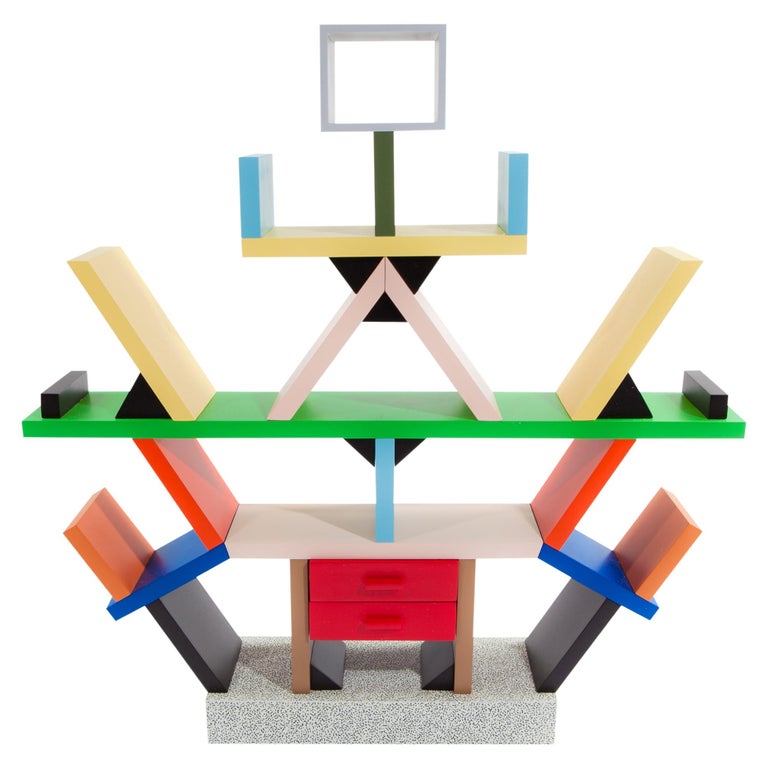 “I’ve always thought of this piece as the most enigmatic of the collection: Is it a totem? A colorful spider? A modular game for children? Fantastical architecture? To think that someone insists on using it as a bookshelf!” 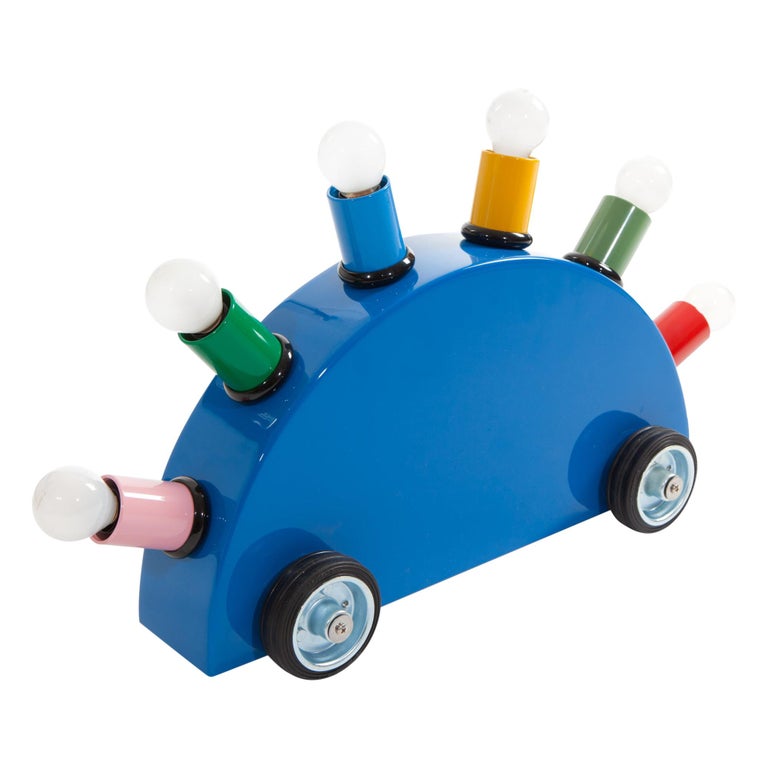 “How do you teach children that this is not a toy car to play with?” 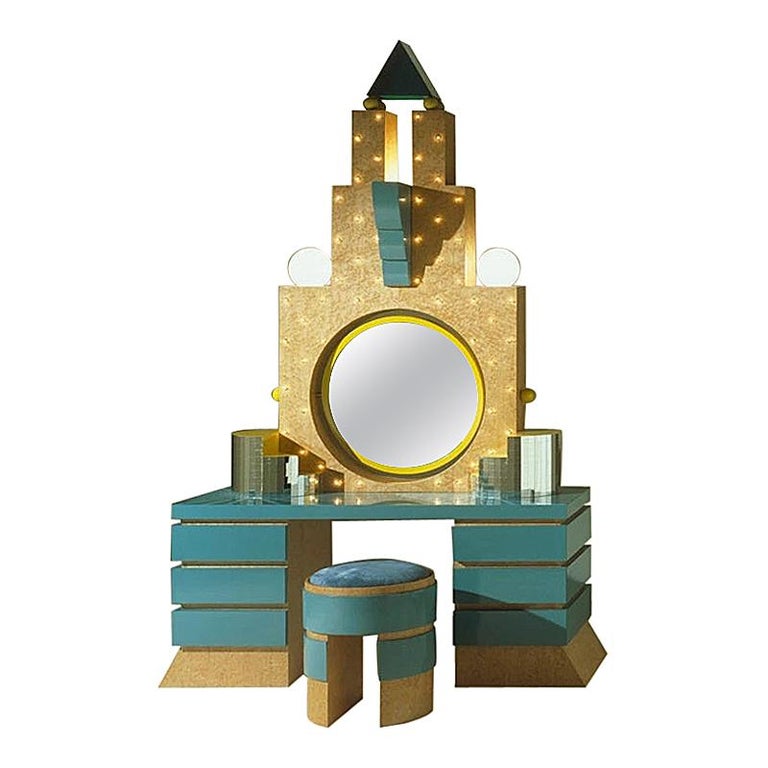 “You can’t help but see yourself as a movie star, reflected in this Hollywood-worthy monument to beauty.” 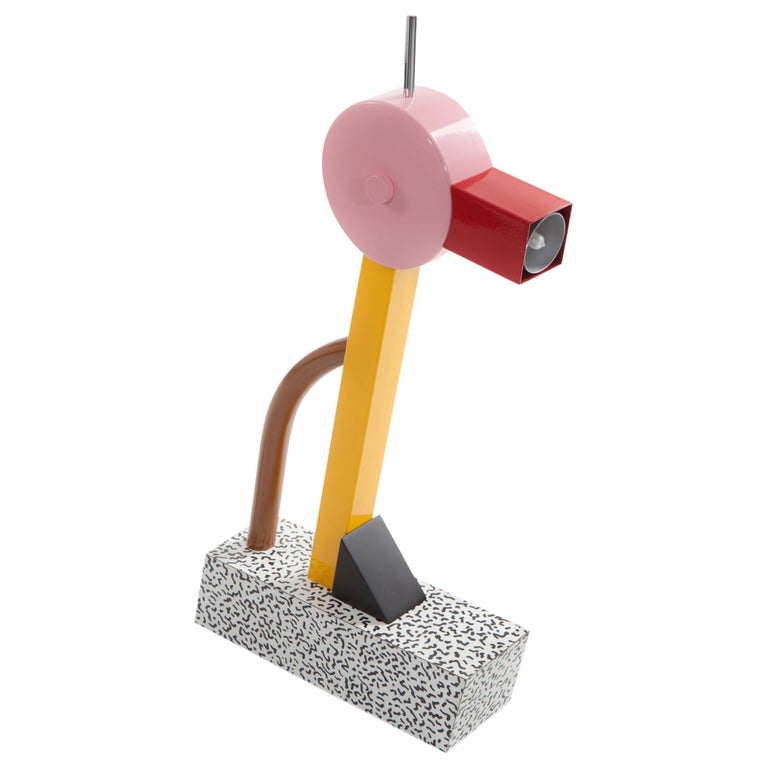 “This lamp/duck is simply a masterpiece: a handful of minimal signs for a maximum of meanings.” 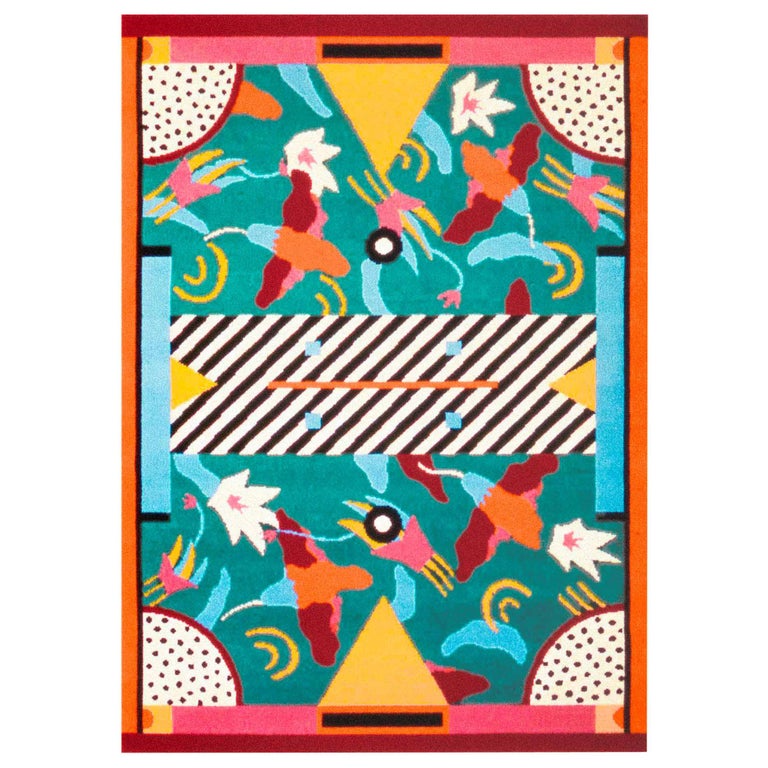 “A Nathalie Du Pasquier carpet is a secret garden, a city seen from a bird’s-eye view, a tale of the One Thousand and One Nights, a childhood daydream, a sudden joy, a tantra, an astonishment.” 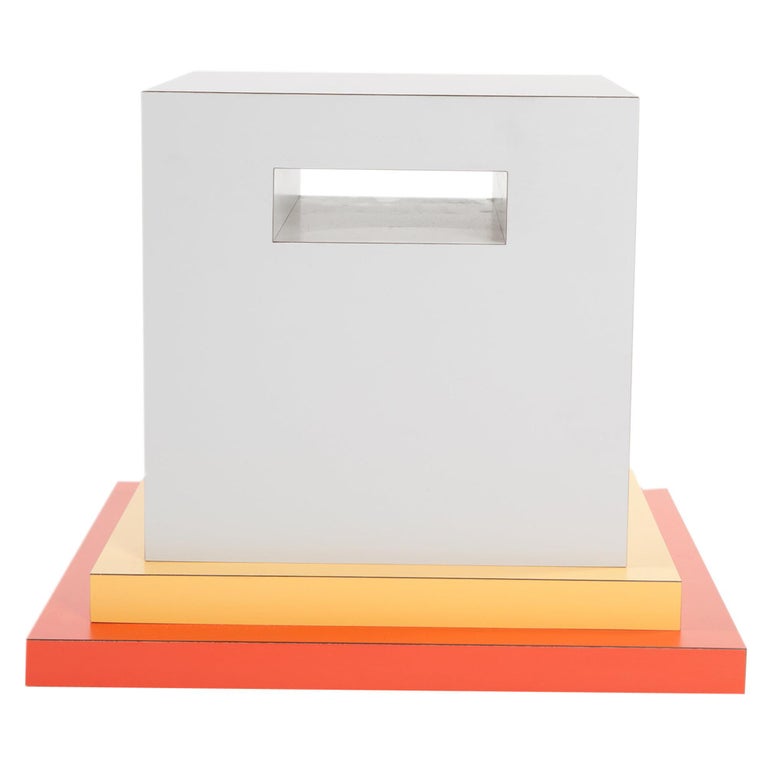 “Perhaps Sottsass was thinking of Piero Manzoni’s Socle du Monde when drawing this small side table. Both designers were Milanese by adoption, both irreverent, both known for their ironic approach to avant-garde art.”