At MRS Couture, the History of the World Is Told through Vintage Fashion 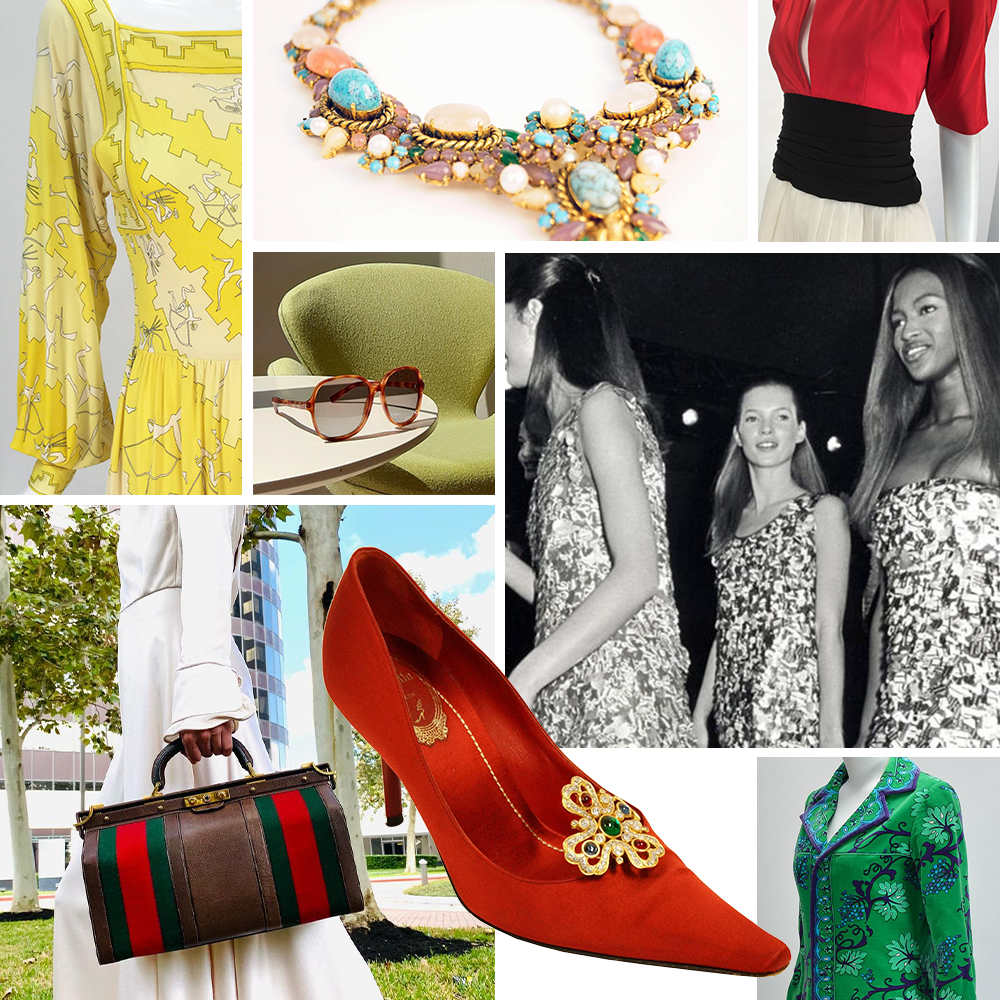 Owner Marci Rosenberg is determined to show that our sartorial choices are about more than gorgeous clothes — they reflect the issues of our times.

August 8, 2021MRS Couture founder Marci Rosenberg is drawn to the narratives that help to shape fashion. It’s the compelling stories behind the threads — be they political, sociological, cultural, economic or creative — that she finds fascinating.

Looking at her career path, it’s easy to see why. The Houston native has been, by turns, a civil rights attorney, a feminist speaker, a political campaigner, a charity fundraiser and an activist working to combat antisemitism, xenophobia and gender inequality.

The daughter of a textile merchant, Rosenberg grew up surrounded by high-quality fabrics but thought better of a career in manufacturing when the rise of inexpensive, mass-produced garments undercut the family business. She threw herself into law and politics but remained faithful to her first love: researching the symbolic and communicative role of clothes.

Over the course of several decades, Rosenberg created an extensive archive of 20th-century couture fashion with the dream of one day founding a museum, a plan still very much on the table.

“Ever since my college days, I’ve wanted to open a different kind of museum,” Rosenberg says. “Not one dedicated to the history of fashion but one that shows how fashion is intertwined with social progress.” She launched MRS Couture (using the initials of her married name, Marci Rosenberg Samuels) as a business in 2008, keen to create revenue for this ambitious project, and is gearing up to unveil a mobile museum in the next 24 months.

She and a staff of three manage her sprawling 6,000-square-foot workspace, housing an archive especially rich in garments from the 1920s to the 1960s by European and American designers, ranging from Jean Patou to Oscar de la Renta, Geoffrey Beene and Bill Blass.

Rosenberg’s most significant piece is arguably a 1969 Madame Grès black silk gown with huge billowing sleeves seemingly crafted from a tidal wave of tumbling fabric. A legend of 20th-century couture whose dresses were beloved by Grace Kelly, Jackie Kennedy and Barbra Streisand, Madame Grès is remembered for her ingenious draping, inspired by Greco-Roman sculpture. A brown version of Rosenberg’s dress is in the permanent collection of New York’s Metropolitan Museum of Art and was featured in the Met Costume Institute’s 2018 “Heavenly Bodies” exhibition.

As always, however, Rosenberg isn’t swayed by the aesthetics alone. “I love beautifully made clothes and fabrics, but a piece has to have an anchor that speaks to me,” she explains. “I love a rags-to-riches tale or a story about anyone who’s fought for their freedom or the freedom of others through their craft. Madame Grès is one of those people.”

Her affection for Grès runs deep. “She had incredible strength of character,” Rosenberg says of the Jewish couturier, who was born Germaine Émilie Krebs and later adopted the name Alix Grès. “During World War II, in occupied Paris, she refused to make gowns for the wives of Nazi officers. She rebelled. She even made dresses in the colors of the French flag.”

Among Rosenberg’s other idols is Jewish American artist and designer Vera Neumann, who overcame post–World War II fabric shortages with creative flair, fashioning her painterly scarves from surplus parachute silk. “Her accessories are so joyful,” says Rosenberg, holding up a vibrant ’60s floral scarf by the designer. “Painting on canvas and then silk was her way of healing from the Holocaust.”

Rosenberg has an entire room dedicated to scarves, a hidden den of gossamer wonders, carefully and individually hung like international flags. “Fashion has taken me all around the world. It’s like that film The Sisterhood of the Traveling Pants. I like to trace the history of each thing I buy. Often, the place of purchase has nothing to do with its origin, which may be thousands of miles away. The question is, How did it get there, and why?”

Here Rosenberg regales Introspective with more tales of extraordinary fashion talents who were not only touched by history but helped shape it.

Researching designers must have led to some amazing discoveries. What has been the most memorable?

I have another Madame Grès dress that is very important to me. For generations, my family worked in the garment industry, and my Jewish grandmother, who had a number of Madame Grès scarves, would often speak about her. So, my fascination with her started early on.

There was a rumor that during the war, before her boutique was closed by the Nazis, Alix Grès would embellish her gowns with a Star of David sewn into the seams. Whenever I see her wartime pieces come up at auction, I buy them for this very reason.

One day, I found the most beautiful black-and-red-silk Grecian-style gown from this era. When I checked inside, I discovered two white stars sewn on either side of the gown. I was crying, shaking even. You have to remember that Jews were forced by the Nazis to wear a badge in the form of the Star of David on their arm as an identifier. The symbol became a thing of shame. Madame Grès reclaimed it and gave it back its beauty.

Do you remember the very first vintage piece you bought?

In my sophomore year, I bought a beautiful marigold-yellow dress embroidered with gold beads, which I still have. It isn’t labeled, but it looks like a couture piece because it’s beautifully made with a very nineteen-fifties silhouette and a matching cape. It cost me eighty-eight dollars, which was a big deal for me back then. I have worked in politics for a number of years, and I have worn it to the inaugural ceremonies of every president I have supported. In fact, I wore it to Barack Obama’s first and second inaugural addresses.

We often think of European designers dominating fashion in the post–World War II period. Is this misguided?

There are so many amazing designers who created things of great significance at this time in America. For example, I prefer the tweed wool suits of Adolfo [the Cuban-born designer who immigrated to New York as a teenager] to those of Coco Chanel. He took fashion by storm in the nineteen sixties with his award-winning hats and couture gowns.

There’s Lilli Ann [founded in San Francisco in 1934 by businessman Adolph Schuman and named after his wife], which made phenomenal swing coats in the forties and fifties. I have a number of them. They’re crafted from polyester and lined with silk, because back then, polyester was such a new and exciting fabric.

And going back to Vera Neumann, she paved the way for multiproduct branding, moving on from scarves to clothes and homeware products. My grandmother had a shower curtain designed by her! So, stories like this make you think about fashion in the context of change. Industrialization, feminism, politics — they all come into focus.

What is your most unusual piece?

I have a collection of paper dresses, which were popular in the nineteen sixties, designed to be worn once and thrown away. They were initially designed as walking advertisements — one of the first was by the Southwestern Bell Telephone Company and made out of phone-book pages. Campbell’s Soup also had one. They were quickly adopted as political fashion statements. So, if you supported Nixon, you could parade around in a Nixon-themed disposable dress. They are obviously very rare, but occasionally, they turn up in mint condition wrapped in their original packaging — that really is a fantastic find!

Aside from Madame Grès, whose story would you like to illustrate at your history museum?

America was a place of promise in the early twentieth century, and I think the story of Hattie Carnegie illustrates that. Originally from Vienna, she immigrated to America with her family and launched herself into the fashion business [in 1909], initially with hats. She changed her surname to match that of steel tycoon Andrew Carnegie, because she wanted to be taken seriously. She believed that the name would empower her.

It must have worked, because she became one of America’s most important designers of the nineteen thirties. She made incredible clothes, hats and costume jewelry. I have a lot of her things. Then again, I have a lot of everything — tons of Saint Laurent, Marc Bohan for Dior, Giorgio Sant’Angelo, Oscar de la Renta. These are innovators whose visions left a unique imprint on our world. Their collections allow us to step back in time. It’s part of the hidden magic we feel when we wear their designs. 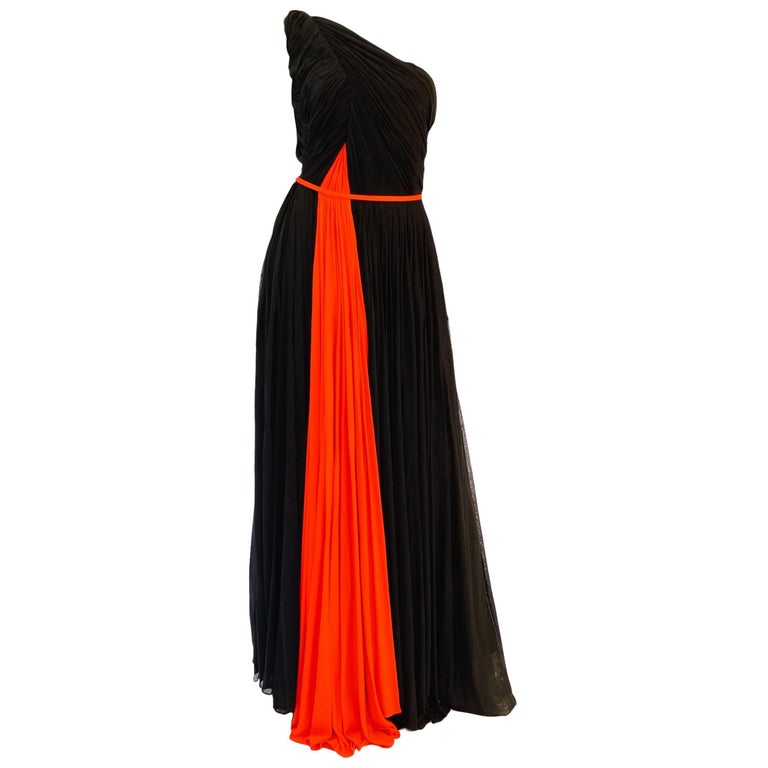 “This dress embodies strength and courage. Beyond the dramatic color scheme offsetting the classical Grecian-goddess pleats, this evening dress has two Stars of David hidden in the lining. Embroidering them was no small act, considering Madame Grès was a Jewish designer working in Paris during the German occupation.”

“I mainly collect vintage, but sometimes a contemporary piece will really stand out. There’s no denying that some would look at Kawakubo’s graphic, gender-neutral, flat-pack design and think Chanel. Is it homage or parody? I love the tension!” 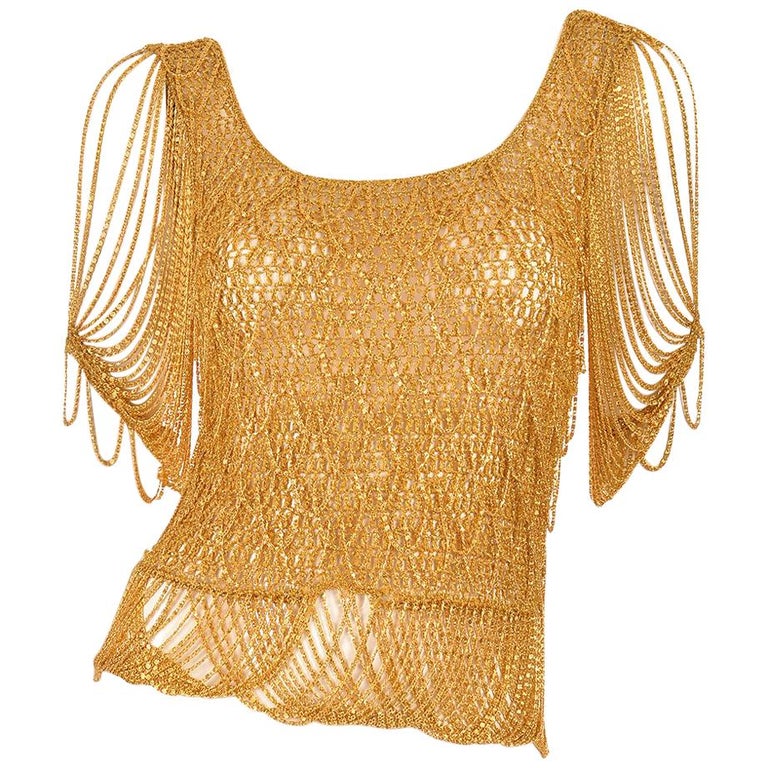 “This hand-beaded top is the perfect accent piece. It’s gold, it glimmers, and it really comes alive, swaying and rippling with every step you take. It looks so current, which makes sense, as Azzaro, in conjunction with Rabanne, really paved the way for contemporary body jewelry.” 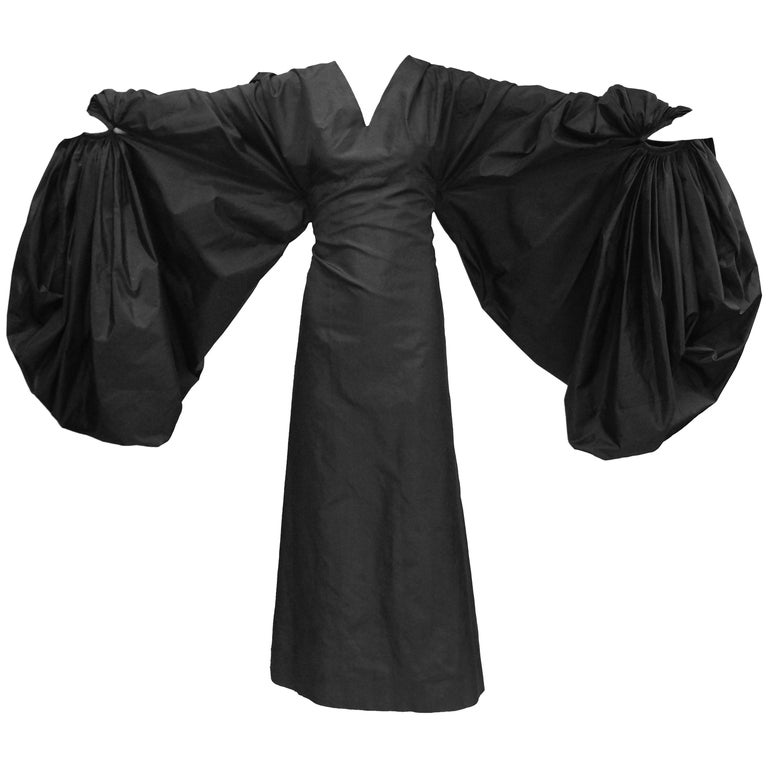 “This gorgeous dress is a splendid exploration of balance, with its sculptural, maximalist volume constructed using a minimalist yet sumptuous textile. Imagine my surprise when walking through the Met’s ‘Heavenly Bodies’ exhibition in 2018 and spotting its twin on display!” 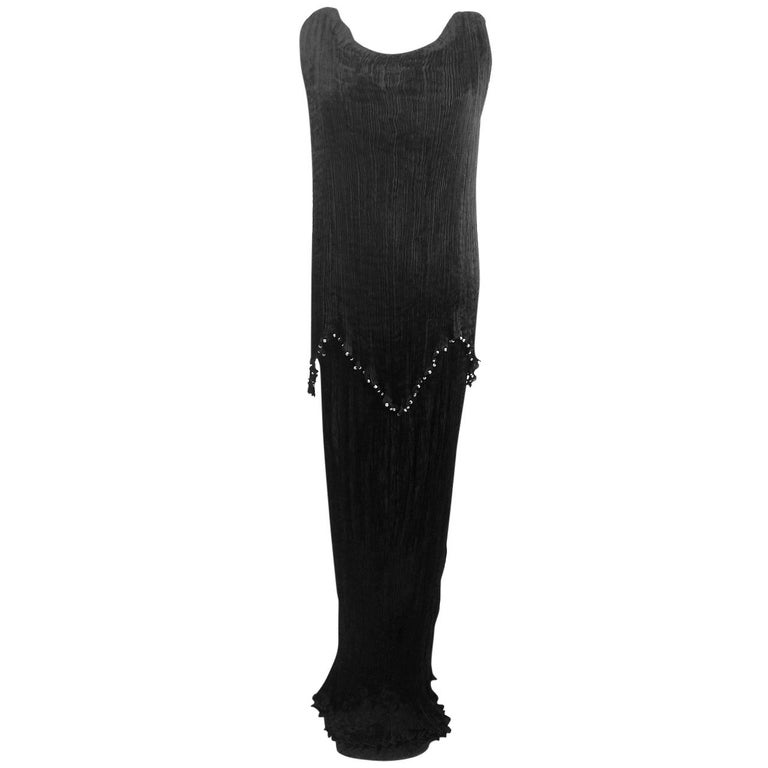 “It’s wild to think that this dress is over a hundred years old, and yet Fortuny’s impeccable hand-pleated design remains timeless and impossible to re-create. Few Fortunys still exist. We have a set of gloves in the garment’s preservation box for anyone handling the dress, which I think has definitely contributed to its longevity. The buttons alone are covetable.” 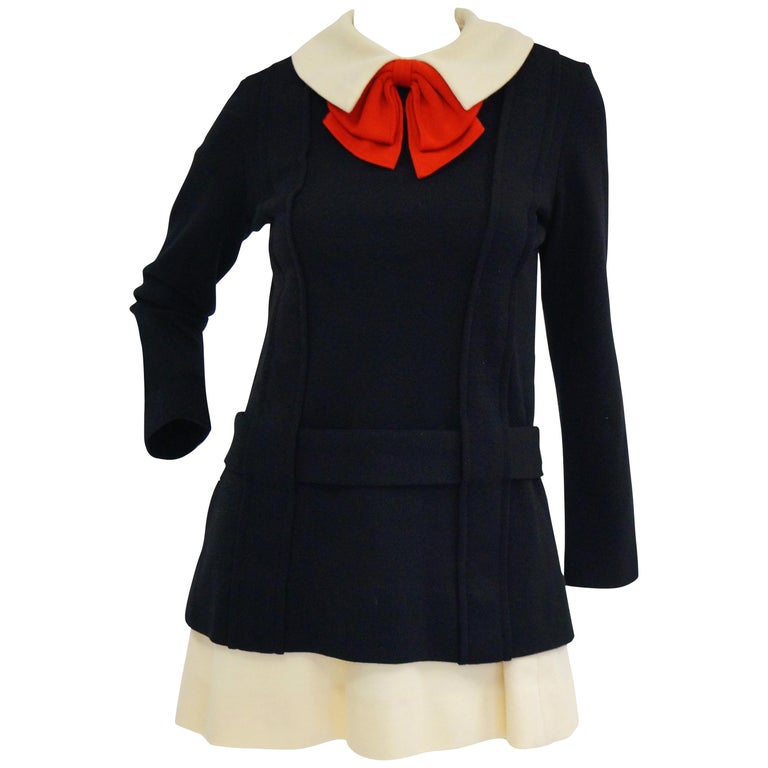 “The three-piece ensemble is playful and fresh, with a thick knit that keeps it from conforming to the wearer’s body — it’s almost sculptural, really. Gernreich was king of nineteen-sixties fashion, and this fits snugly into his portfolio between the monokini and his futuristic unisex uniforms.” 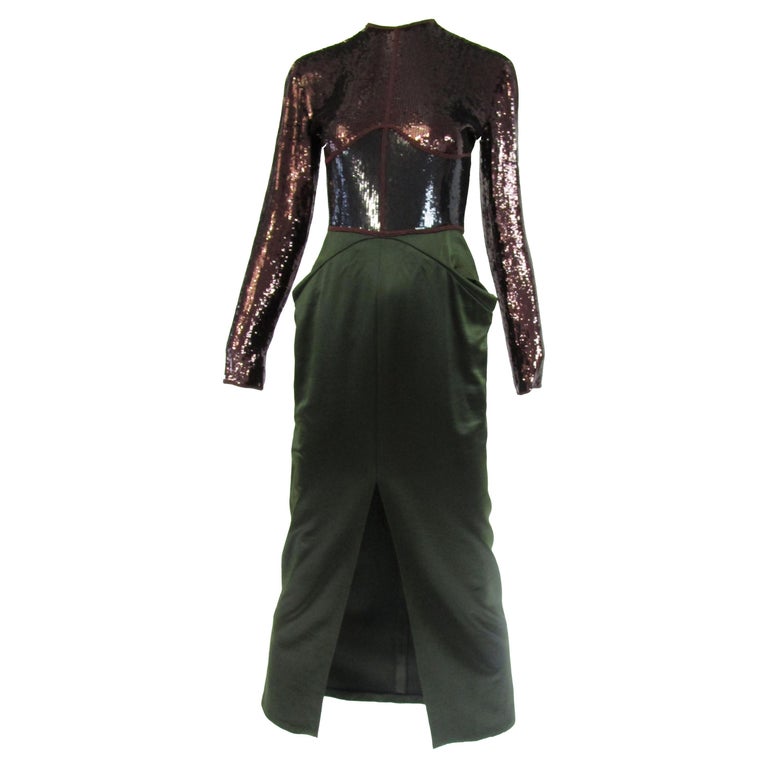 “This dress, with its tight, shimmering bodice and sleek leg-skimming skirt, epitomizes early-nineties fashion. It’s astounding to think that the man who designed this dark, moody dress also designed very flirty swing coats in the nineteen fifties. Beene was a master of his craft, leading American fashion for over forty years.”