The Biennale des Antiquaires again brings the best of the best to the Grand Palais, while offering a new range of objects and dazzling high-tech displays. 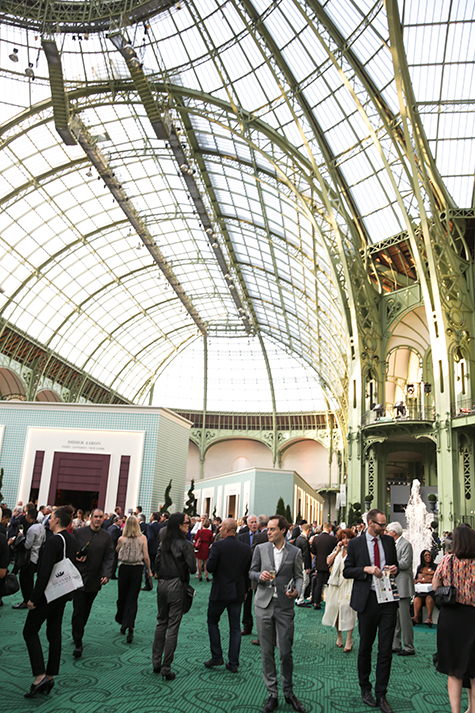 Sheer glamour is what distinguishes Paris’s Biennale des Antiquaires from the other top international fairs, like Masterpiece in London or the European Fine Art Fair (TEFAF), in the Netherlands. The French have style in their genes. This year, the organizers say, the fair — which long specialized in fine French furniture from the 18th century but now offers a range of material from different eras and countries — is going to be even better, with a fresh design, many more dealers and special exhibitions. “We are doing the biennale because it’s the most glamorous fair in the world,” says Mattia Martinelli, of Robertaebasta, a first-time exhibitor from Milan that specializes in Italian art and design from 1950 to 1980.

To create the public spaces beneath the soaring glass roof of the Grand Palais, the organizers turned to Nathalie Crinière, a French set designer who achieved great renown for her pre-sale Grand Palais staging of the $484 million Yves Saint Laurent and Pierre Bergé auction in 2009. She is keeping mum about her plans this time around, so visitors will have a surprise when the fair opens on September 10. (It runs through the 18th.)

Other news? The biennale has decided, despite its name, to become an annual fair beginning with this edition. It will also be larger, with 121 exhibitors, a 36 percent increase from 2014. Although most of the dealers are French, 41 are foreign. And there are only four fine-jewelry dealers, a decrease from last edition. Moreover, they aren’t all big brands: Taiwanese jeweler Cindy Chao is making her biennale debut with a cave-like booth bathed in LED lighting designed by multidisciplinary Peruvian artist Grimanesa Amorós.

This year’s event incluides three non-selling exhibitions: The State Hermitage Museum is showing 35 18th–century French masterpieces from its collection, including paintings, porcelain and silver. (In the 1700s, the Russian nobility went mad for everything French, particularly the language.) The Geneva-based Fondation de la Haute Horlogerie has curated a show of 100 artifacts to illustrate the history of watchmaking. And finally, France’s Mobilier National, the state-owned repository of French furnishings, will display iconic 20th-century pieces illustrating the evolution of French furniture forms over the past century, among them a 1946 Jules Leleu sycamore chair and an unusual bronze and palm-wood-veneered desk by Eugène Printz from 1944. 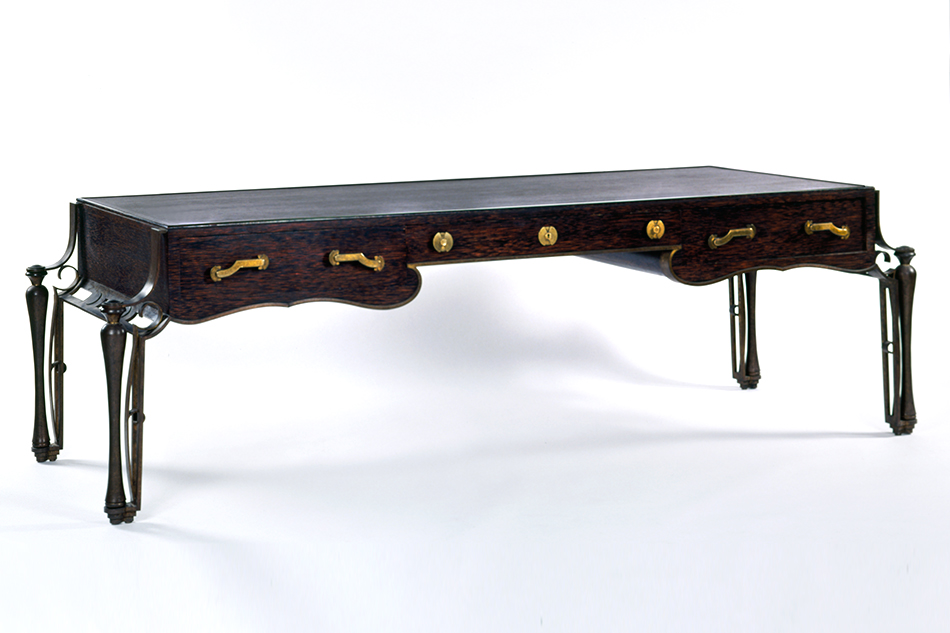 France’s Mobilier National is exhibiting this Eugène Printz bureau, which was commissioned by the organization in 1943 and presented at the Salon des Tuileries a year later. Photo by Isabelle Bideau 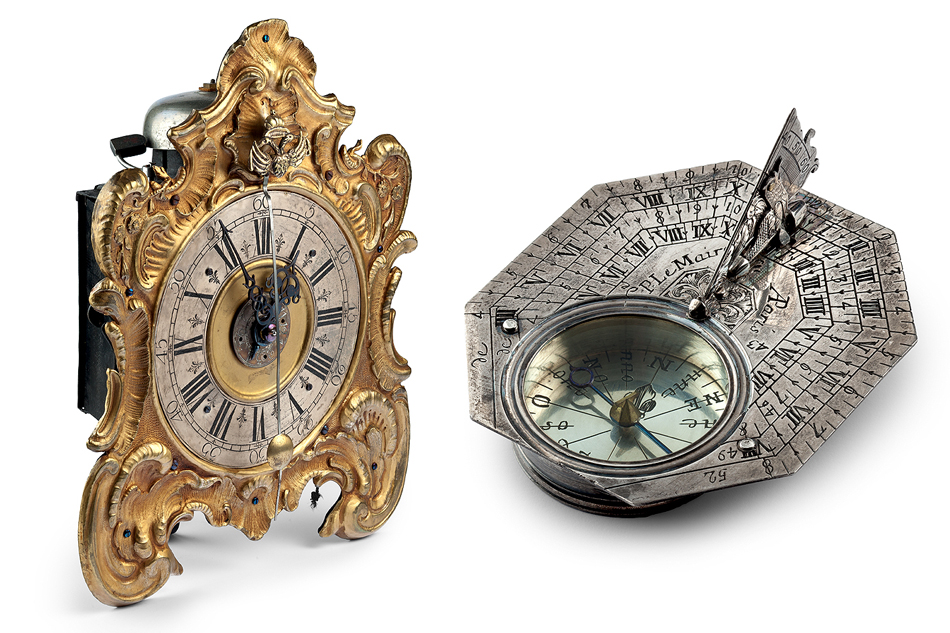 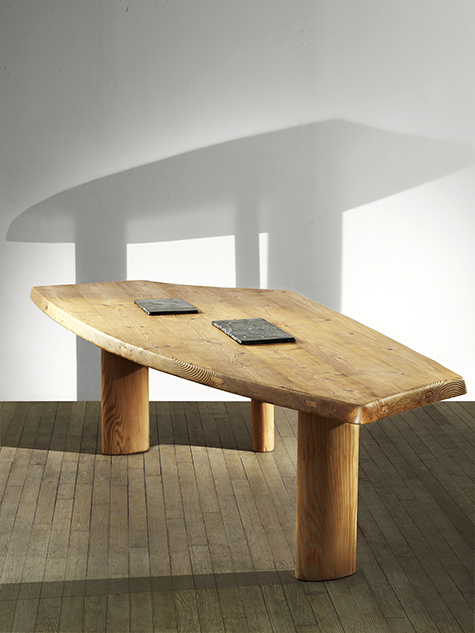 Galerie Downtown will show this Pierre Jeanneret five-sided dining table, which he made for Jean Prouvé in 1943.

Not surprisingly, many participating 1stdibs dealers will also be focusing on the 20th century. Galerie Marcilhac, a specialist in Art Nouveau and Art Deco, will feature a beguiling circa 1920 bronze butterfly-festooned ashtray by French furniture designer and interior decorator Armand Albert Rateau, and abstract sculptures and a unique 1921 black-and-white marble console by Joseph Csaky, a pioneering Hungarian sculptor who lived in Paris.

Galerie Lumières will display a 1925 tea cabinet by the early-20th-century French couturier Paul Poiret, while François Laffanour, of Galerie Downtown, an expert on French postwar furniture designed by architects, will show a circa 1945 Jean Prouvé President’s desk and a five-sided dining table that Le Corbusier’s cousin (and partner) Pierre Jeanneret made for Prouvé in 1943.

At Galerie Martel-Greiner are pieces from the 1960s and ’70s  by the Belgian sculptor, furniture designer and decorator Armand Jonckers, whose low. round, modernist brass tables are intricately etched and engraved in abstract patterns. Now in his late 70s, Jonckers works alongside his children, continuing to produce his signature, one-of-a-kind creations.

In its updated neoclassical booth, Galerie Yves Gastou has a selection of commissioned pieces from the 1940s to the’70s, including notable ones by André Arbus, Vadim Androusov, Gilbert Poillerat, Maxime Old, César, François-Xavier Lalanne and others.

Galerie Diane de Polignac, which is reopening in a much larger space in the seventh arrondissement, sells postwar paintings and sculptures as well as contemporary furniture by artists like Gildas Berthelot, a Canadian master wood carver. For the biennale, the gallery will introduce artists from all over who came to Paris tafter World War II, including Sam Francis, Hans Hartung, Mark Tobey, Wifredo Lam and Serge Poliakoff. 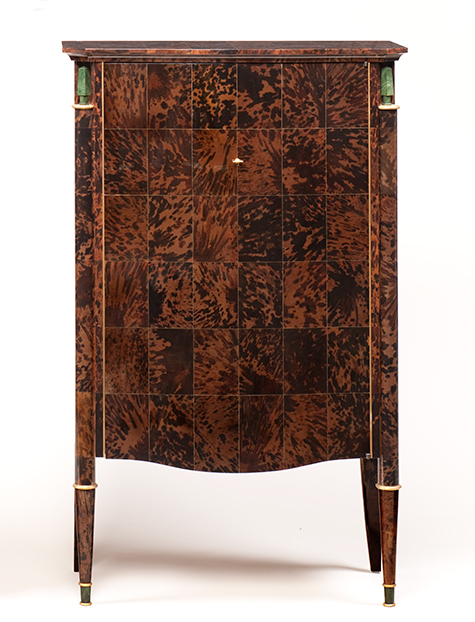 First-time biennale participant New York gallery Maison Gerard, one of only two American dealers in the biennale, will be sharing the booth of antique-wallpaper dealer Carolle Thibaut-Pomerantz. Maison Gerard, which specializes in French Art Deco, 20th-century design and contemporary objects, will spotlight two outstanding Maison Leleu cabinets sheathed in tortoiseshell from the South Pacific. “In 1963,”gallery director Benoist Drut explains, “a Parisian called Schmitt commissioned one for his foyer, where it was recorded as ‘the jewel of the apartment.’ An important Jules Leleu client ordered the second one in the same year, but it has rock-crystal arrows decorating it.” Nearly five feet high, standing on slender legs and, as Drut says, “extremely classical,” they are both showstoppers. The gallery will also have mirrors created by Line Vautrin in the 1960s and an armchair designed by Émile-Jacques Ruhlmann in the 1920s.

“We think it is the best time for design in the past two hundred years in Italy,” says Robertaebasta’s Martinelli, the son of Roberta Tagliavini, who founded the gallery in 1967. “My mother was the first Italian dealer to specialize in twentieth-century Italian design, which people once called ‘used’ furniture. But then we attracted the fashion crowd. Versace was our first and biggest client. Then Dolce & Gabbana came. Armani sent Cate Blanchett to us. Now we have clients from everywhere. Even Tom Cruise.” 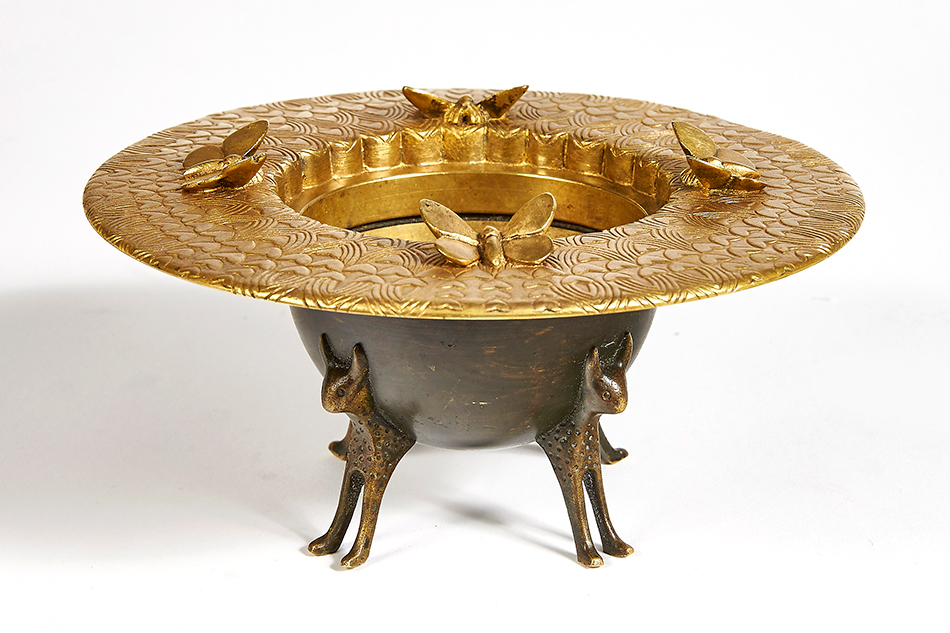 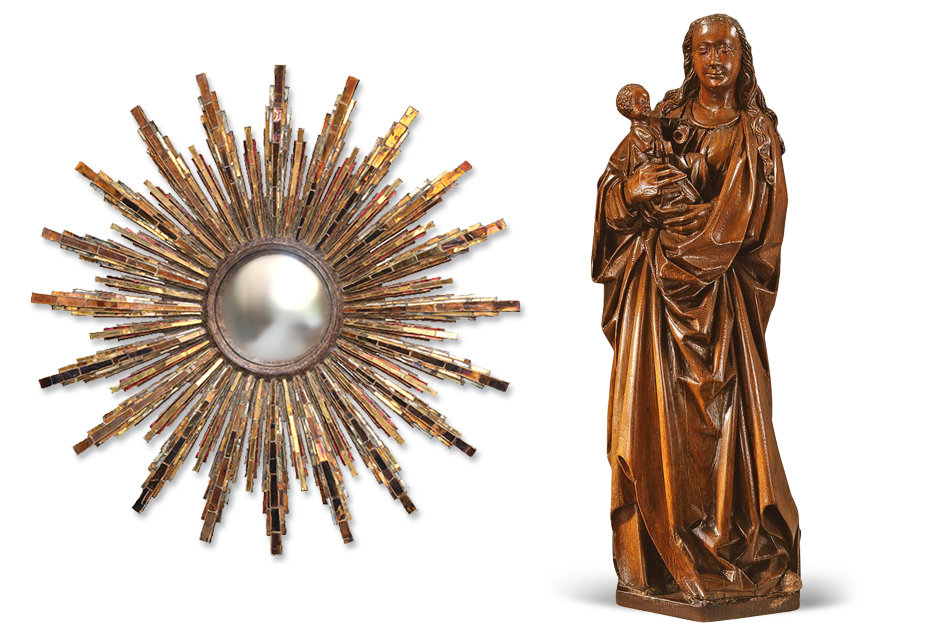 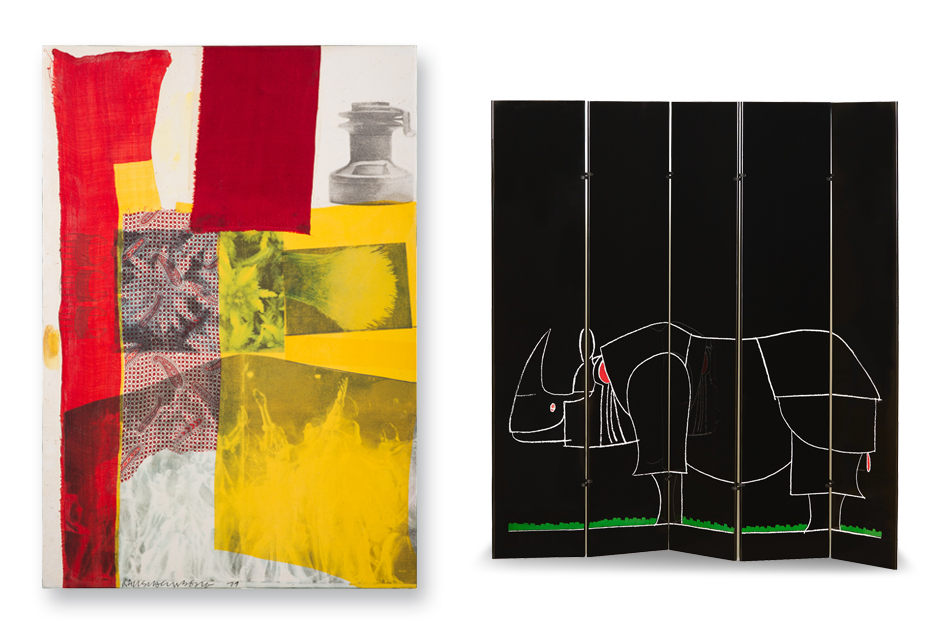 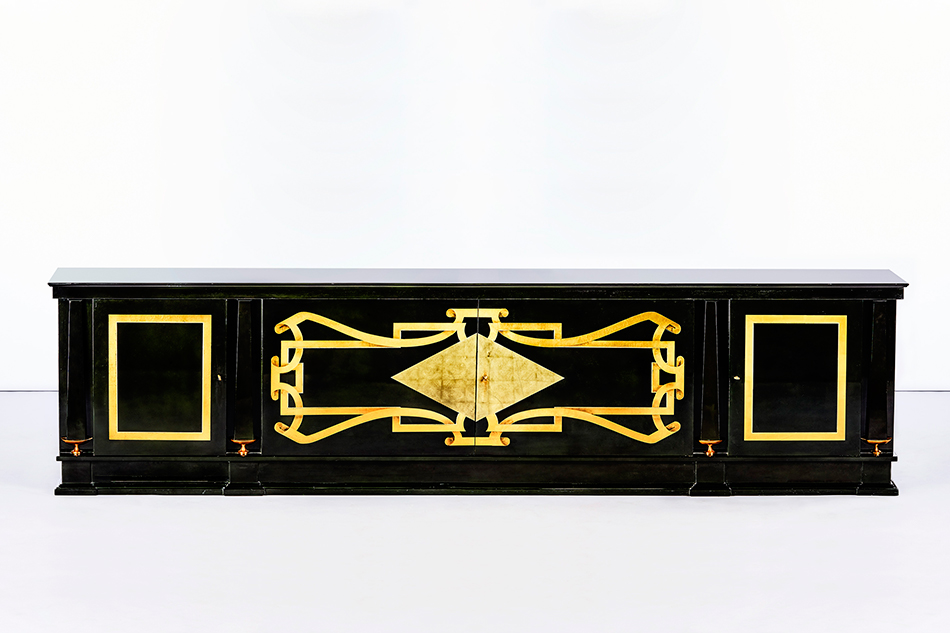 This large André Arbus sideboard, 1951, has double central doors decorated with gold-leaf arabesques and imitation shagreen lacquer. The piece is being exhibited by Galerie Yves Gastou. 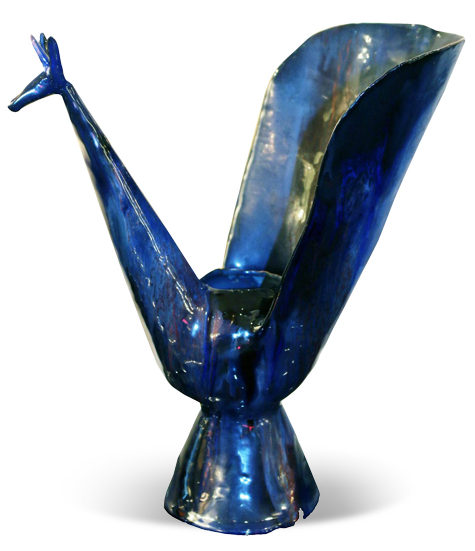 Fausto Melotti’s Peacock vase, 1960, is being offered by Milanese dealer Robertaebasta, which is exhibiting at the biennale for the first time.

The gallery promotes work by Paolo Scheggi, an artist whose large, layered, monochromatic canvases recall those of his contemporary Lucio Fontana. “People have to know not just the big names,” says Martinelli, a certified expert who does appraisals for the court in Milan. “At the biennale, we will show really important Italians like Scheggi; the ceramist Fausto Melotti; and Agostino Bonalumi, a leading figure of the Italian avant-garde.”

The biennale always produces discoveries — antiquities, antiques, paintings, ceramics and jewelry that have been out of public view for years. One of this year’s will be in the stand of London fine art dealer Charles Beddington.

Beddington has what he calls “the lost original” of  Diana and Actaeon, a large 17th-century Italian oil painting by Carlo Maratta and Jan Frans “l’Orizzonte” van Bloemenan that is well known from copies of it owned by the Hermitage and Chatsworth. According to the myth as recounted in Ovid’s Metamorphoses, the young hunter Actaeon inadvertently came upon Diana, goddess of the hunt, while she was bathing, nude, with her attendants in the forest. The nymphs screamed, a furious Diana splashed water on Actaeon, and he was transformed into a deer. In the painting, Diana stands under a rock arch beside a gurgling stream, pointing at the fleeing Actaeon, on whose head antlers are already sprouting.

How does Beddington know this is the original? “First of all, it’s better painted than the copies,” he says. “But it’s also been anointed by the Maratta expert.” Price? Just over $1 million.

Finally, Galerie Gabrielle Laroche, of Paris will show wood furniture and sculpture from the Middle Ages and Renaissance, as well as contemporary bronze sculptures. Mixing of eras in this way makes the older art seem more modern.

As always, the success of the biennale rests on the variety and sheer quality of its offerings and, yes, the beauty of the setting. The French always bring an extra special something to the table.