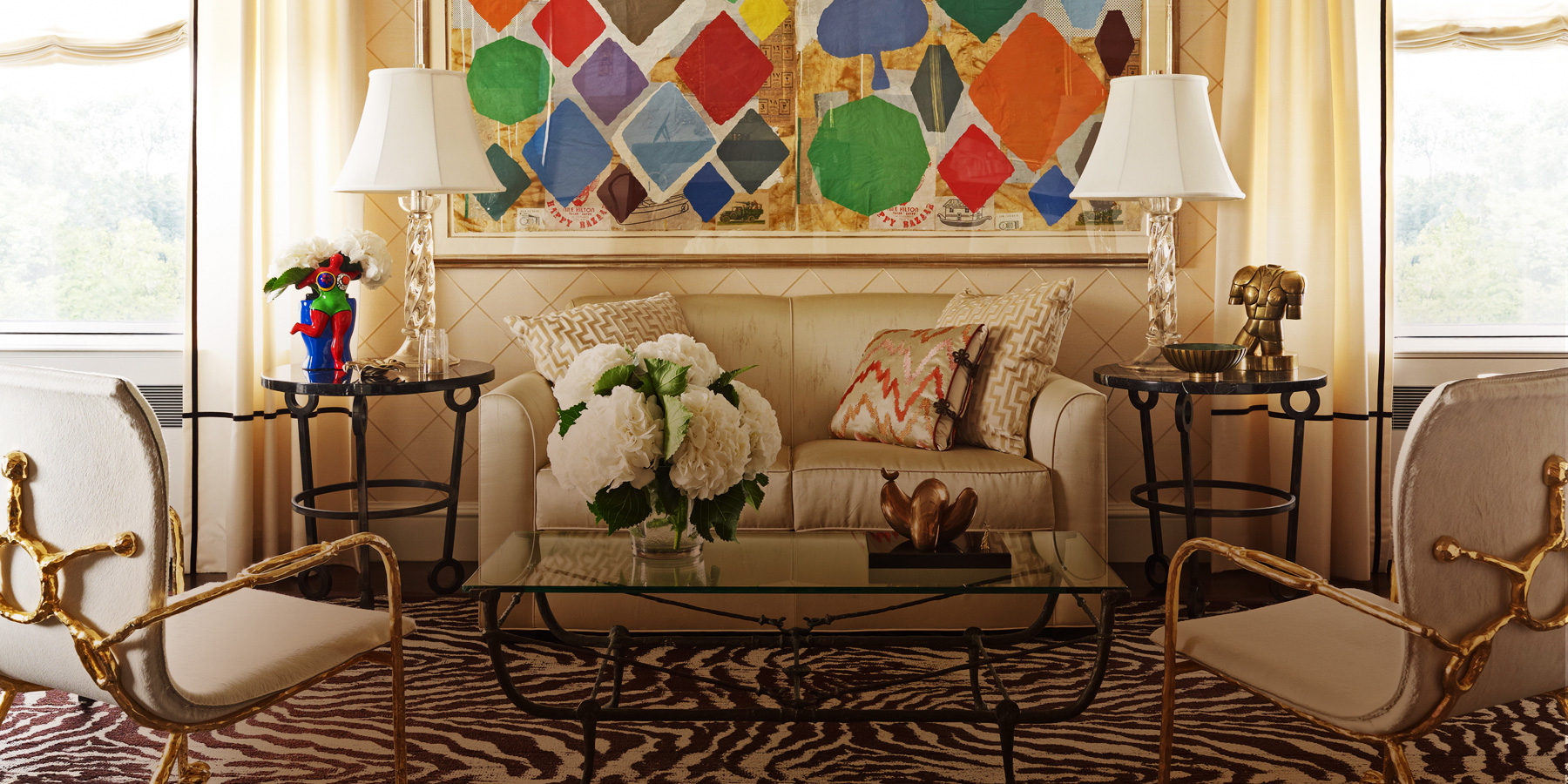 Having just released Artfully Modern — his second Monacelli Press monograph — the sought-after New York designer Richard Mishaan talks to 1stdibs about the art of collecting, his latest projects and his endless curiosity. 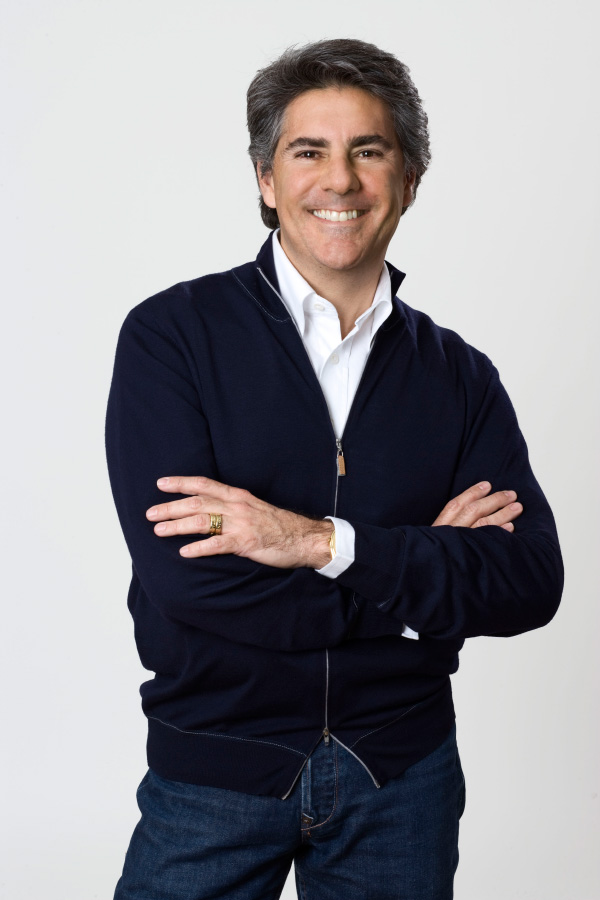 November 2014Born and raised in Colombia, Richard Mishaan has been busy of late, with projects in locales ranging from his home country to London, Miami and New York, his home base. All photos courtesy of The Monacelli Press

If you ask Richard Mishaan what’s new, don’t expect him to answer “not much.” Instead, you’ll hear a litany of design projects he’s involved with: a hotel in Cartagena (he was born and raised in Colombia), four apartments in Manhattan and homes in Sag Harbor and London. Then there are table-top lines he’s designing for Lenox and Dansk. And he’s forever researching and curating the roster of artisans he showcases at Homer, his Greenwich Village design store. Yep, Mishaan’s a busy guy.

On top of all this, when we met he was preparing for the November release of his new book, Artfully Modern (The Monacelli Press), a follow-up to 2009’s Modern Luxury. Written with Judith Nasatir, the book is divided into four chapters, each expressing Mishaan’s various points of view on design. In his introduction, he explains what motivates him: “The design process can seem abstract, but it always begins and ends with the client,” he writes. “My job is to understand who my clients are and how they live. This means I study human nature, behavior and relationships. I sometimes jokingly refer to myself as an anthropologist.”

In Chapter 1, “All About Art,” he writes about the impact that seeing Yves St. Laurent’s legendary Paris living room had on him: “It contained an unbelievable mix of cultures, styles and periods — from Napoleon III to Art Deco to the ancient world. Rare chairs by Pierre Chareau. A tabouret by Pierre Legrain. Art by Léger, Matisse, de Chirico, Modigliani and Les Lelannes. He blended them with African pieces, Orientalist overtones and crucifixes!” That image was a lesson Mishaan never forgot: Namely, when it comes to inspired design, there are no rules. 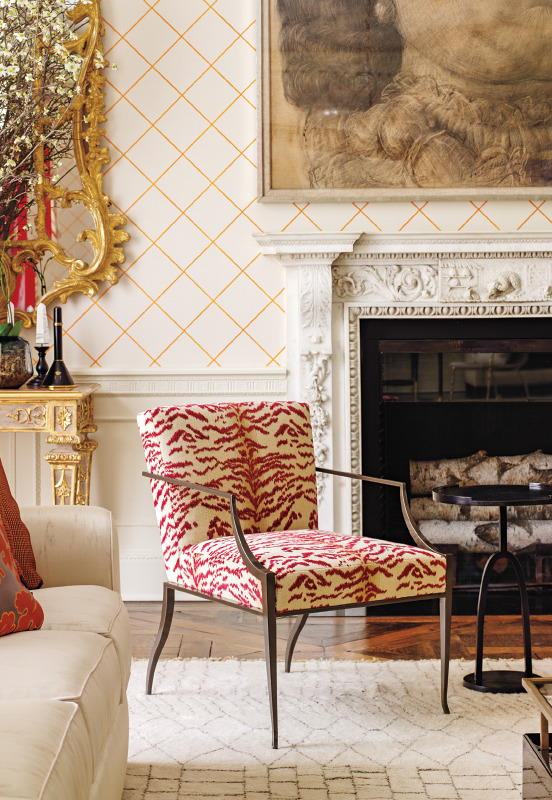 At the 2011 Kips Bay Decorator Show House, Mishaan designed a living room that employed a variety of vibrant patterns, such as the red-and-white tiger print upholstery on this Bolier & Company outdoor chair.

In the book, he refers to the 2011 Kips Bay Decorator Show House living room he created in a neo-Federalist Manhattan townhouse that was once the home of John Hay “Jock” Whitney (the fabled New York financier, publisher, sportsman, art collector and tastemaker). Were Whitney alive today, Mishaan surmises, a room like this might very well appeal to him, with its classical moldings and high ceilings enlivened by unexpected touches: metal side chairs designed for the outdoors and covered in a red-and-white tiger print, a Botero study of a zaftig Mona Lisa hanging over the mantel, a strikingly modern-looking tribal table and a collection of mercury-glass mushrooms.

Mishaan’s own apartment in a pre-war building overlooking Central Park also celebrates many eras, and in doing so acts as a canvas for his exuberant collection of art, sculpture and furnishings. “I’ve never thought of working in one particular style,” he says. “I love to mix it up too much.” And does he ever. Minimalism is not for Mishaan. Beige is barely in his vocabulary. And monochrome doesn’t enter his mind. Think bracing colors, a vast and varied array of objects and art and an unapologetic sense of fun.

I met Mishaan and his beautiful wife of 27 years, Marcia, when I first became editor in chief of Town & Country in 1993. We became friends instantly. I’ve visited their house in the Hamptons and have been the recipient of their hospitality dozens of times. On the 150th anniversary of Central Park, we hosted a black-tie dinner party together at the Mishaans’s apartment with its spectacular view. Le Cirque did the catering, a jazz combo played and everyone dressed to the nines. F. Scott Fitzgerald would have been right at home. 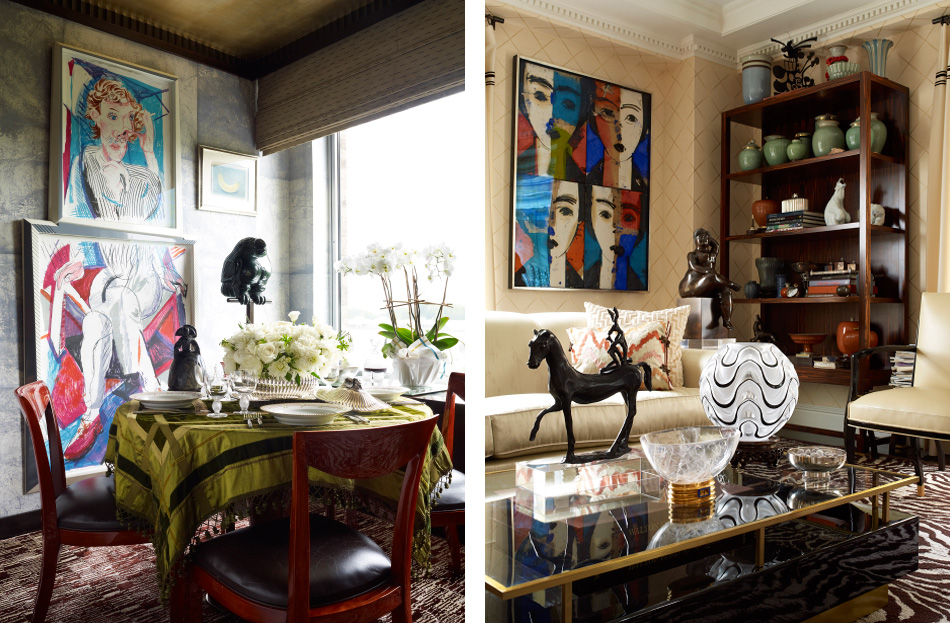 In Mishaan’s Manhattan apartment, a David Hockney portrait adds a splash of color to the library (left), and the living room features a Leleu coffee table graced with crystalline figures and a Barry Flanagan sculpture. 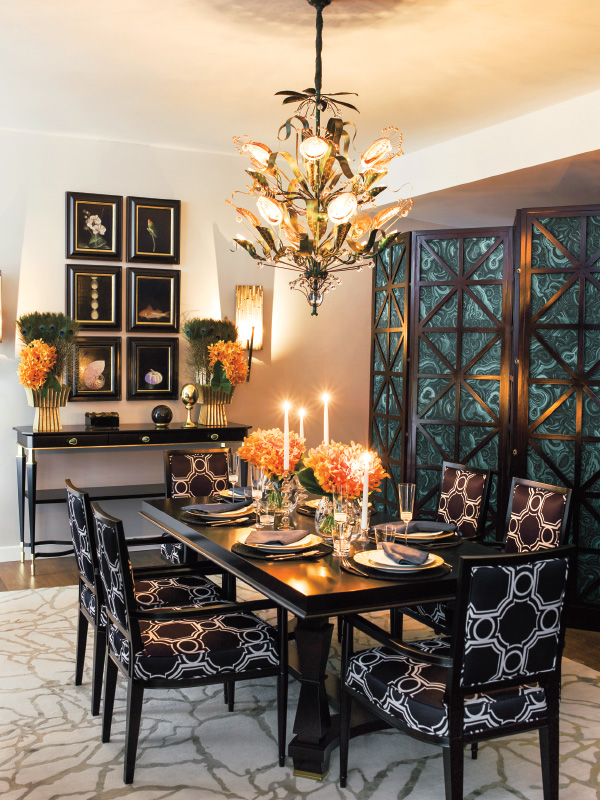 A dining room designed by Mishaan for Town & Country at the Hearst Designer Visions Showcase in 2009 stands out for its bold monochromatic palette and a stunning Tony Duquette light fixture.

“Staying dynamic, cool and current is where the fun is.”

In 2009, when Town & Country was asked to create an apartment for a Hearst Magazines designer showcase and base it around a movie, we chose the 1930s classic Dinner at Eight. Who better to take it on than Richard? We then threw a dinner party there for a small group, and everybody arrived as if they had stepped out of a black-and-white Art Deco-decorated flick.

What I love most about Marcia and Richard is how game they are for anything, especially a good time. No brooding allowed. I sat down with Richard for a leisurely alfresco lunch this summer at Sag Harbor’s Tutto Il Giorno, his favorite trattoria in the Hamptons — the Mishaans, who are parents to two college-age children, Nicholas and Alexandra, have a house in nearby  Sagaponack — and for two hours, we talked about his passion for collecting, which is the dominant theme in Artfully Modern, as well as his zest for life. 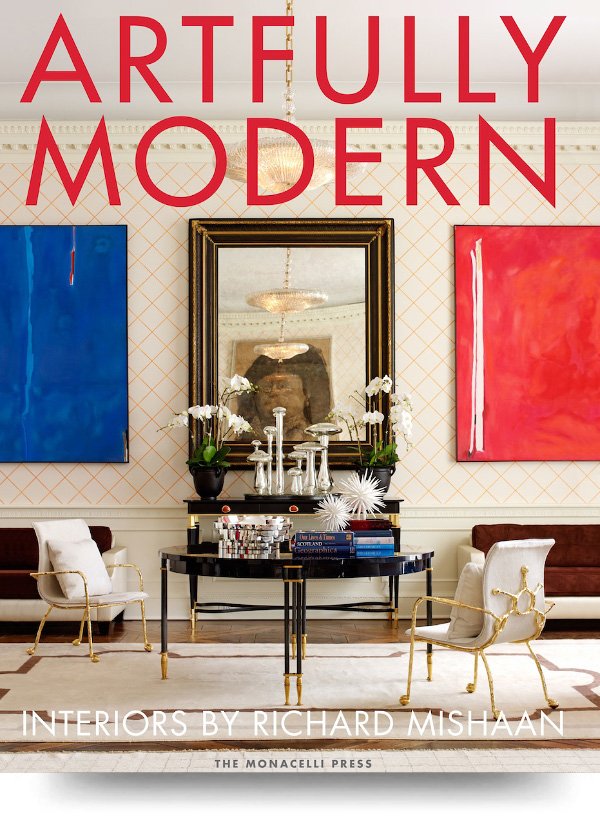 Artfully Modern is Mishaan’s second book published by the Monacelli Press; Modern Luxury was released in 2009.

Tell me what led to the book?

Monacelli, my publisher, thought that now is exactly the right moment for a book about collecting art and incorporating it into the home. And, by the way, it’s not all expensive art — some are found objects, bought at auctions and flea markets. The thing is that my clients have amassed all these paintings and sculpture and don’t know where to put them — everything from the 19th century to the modern day. That’s why they turn to me.

Who are some of the artists we can see represented in the book?

Bonetti, Lalanne, Damien Hirst, Niki de Saint Phalle. Some of the art was in the Kip’s Bay room that I did in 2011 and in the designer showcase for Town & Country. Some is from private houses. There’s both high and low throughout. The idea is to live with what you have.

Does this mean that you can live with what you have and resist the urge to change?

Not if you ask my wife, who’ll say, “He changes everything all the time!” But I remind her that all of this “stuff” I’ve accumulated is stored in three warehouses and is begging to be used so why not change? 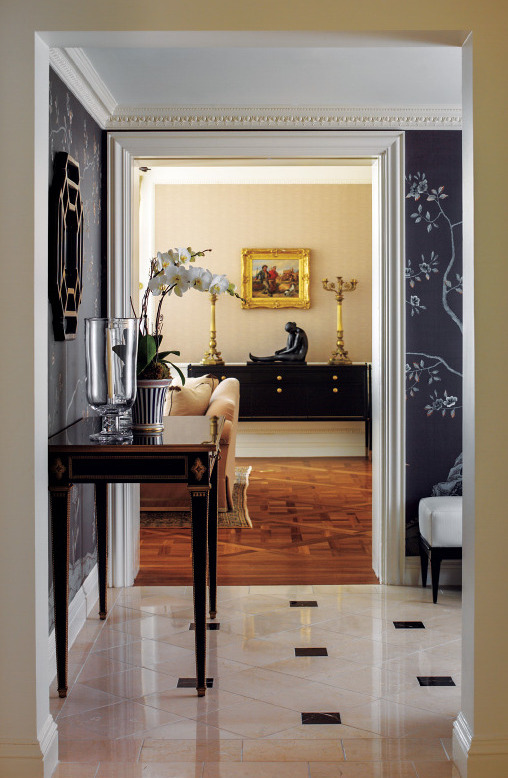 In New York, the foyer of a suite Mishaan designed at the St. Regis welcomes guests with a parcel-gilt ebonized console in the style of Napoleon III and a Chippendale-style mirror.

Aside from residential projects, you’ve lately been venturing into hotel work.

Some years ago, I decorated a suite for the St. Regis in New York. That was my first foray. Most recently, I did 290 rooms, meeting rooms and the ballroom for the Shelborne in Miami Beach, originally designed by Morris Lapidus. I’m also working on a ninety-room hotel in Cartagena, where I have a house. The exterior can’t be touched: It dates back to the 16th century and is one of UNESCO’s world sites. The other hotels are smaller and moderately priced.

Cartagena is on the coast of Colombia, the country where you were born.

My great-grandmother emigrated to South America from Germany before World War II and settled in Colombia, where my family was raised. Another part of the family went to Denmark. My mother — she’s 84 — is still in Bogotá. She also lives in London, New York and Miami.

That explains your wanderlust. You travel a great deal. Tell me about a memorable recent trip.

This past summer, we went to the South of France for a friend’s birthday extravaganza. From there, we went to a peninsula in Finland where friends of ours have several small, restored Scandinavian-style houses and experienced a few days of authentic Finnish hospitality and cuisine. We then flew to Naples, took the boat to Capri and planted ourselves at the Quisisana. We ended the trip in London.

Mishaan bought this KAWS sculpture for his Sagaponack home when he was inspired by another piece given to him by his son, who had become interested in the artist’s in-demand designer toys.

And how did you and Marcia get along?

We only had one disagreement in two weeks, which is remarkable considering how different we are.

Marcia is an athlete, loves the outdoors, hiking and being always on the move. I am on the move in other ways: I can’t sit by a pool. I have to do something cultural or cerebral. When we were on the French Riviera, I went to the Fondation Maeght, in Saint-Paul de Vence; the Matisse Chapel, in Vence; and the Greek-inspired Villa Kerylos, in Beaulieu-sur-Mer — all in one day. No sunbathing for me.

And yet a lot of the places you love are where sunbathers gravitate — St. Bart’s, Capri, the Hamptons, the French Riviera. Is there any place where you can truly relax?

That’s easy: Sagaponack. As soon as I turn into the long unpaved, driveway, I feel like an altogether different person.

Well, not exactly. I’m a neurotic person. Maybe that’s why I relate to all those Woody Allen movies I grew up with. But Sagaponack is where I most easily unwind.