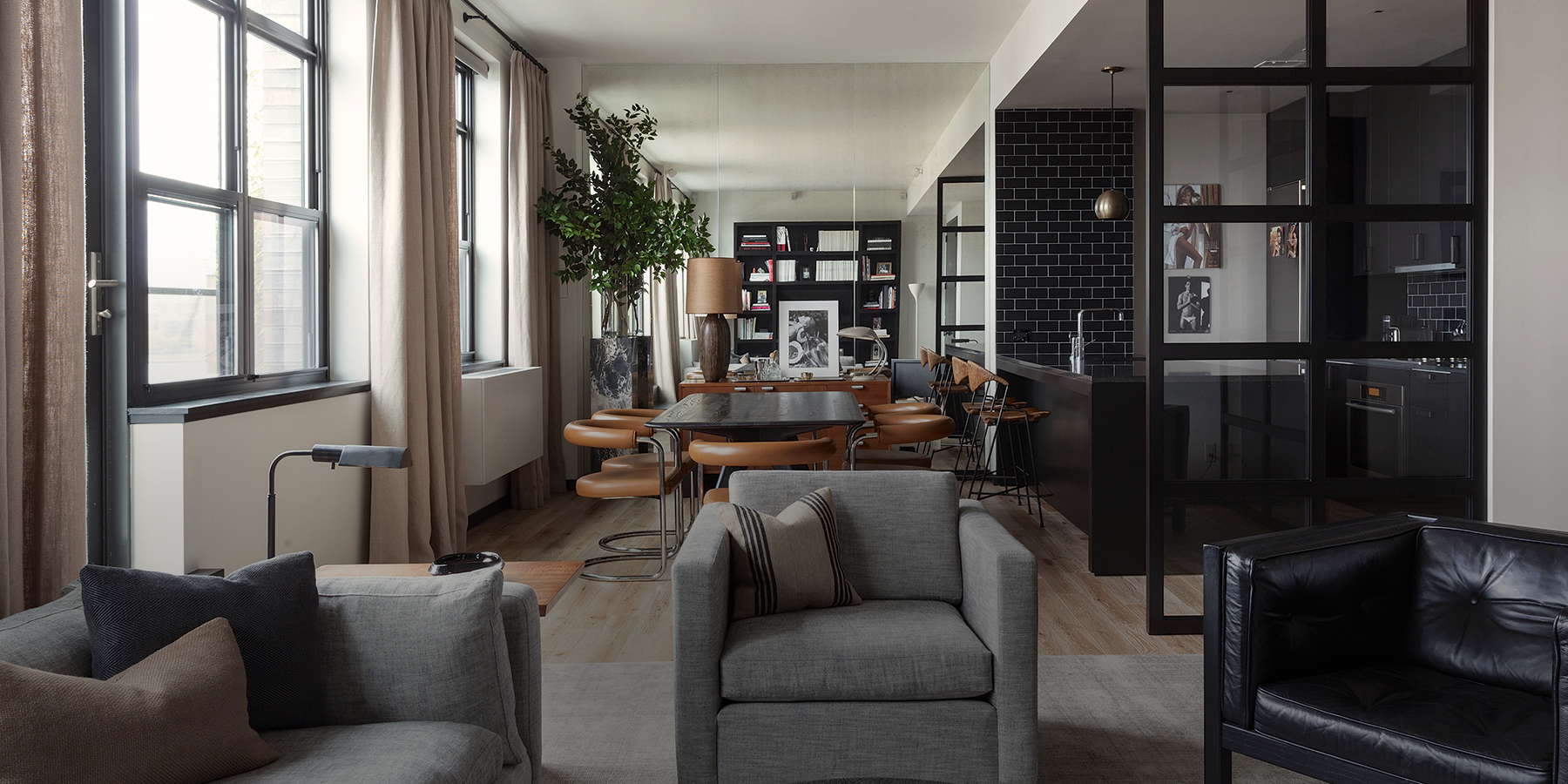 A talented draftsman and alumnus of some of New York's best residential design firms, Brazilian-born architect Andre Mellone has gone from strength to strength since he struck out on his own with Studio Mellone, attracting such fashionable clients as Thom Browne and Jason Wu. 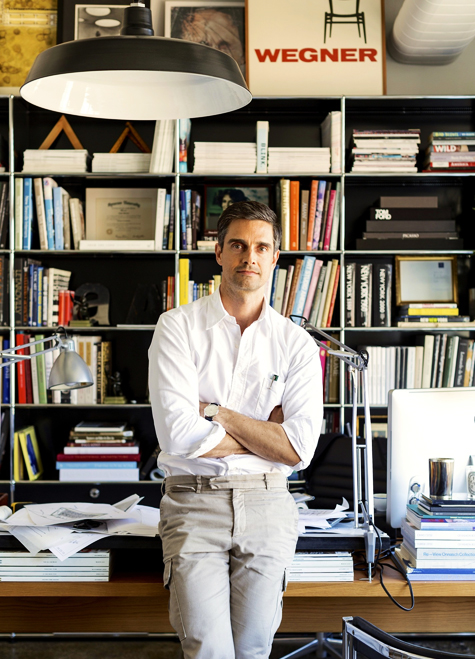 September 14, 2015From his studio in New York’s Chelsea, architect Andre Mellone designs high-end retail and residential spaces for some of the top names in fashion (photo by Andre Mellone). Top: A small, masculine penthouse in Williamsburg, Brooklyn, featuring sofas and chairs covered in Ralph Lauren fabrics as well as pieces by such mid-century stars as George Nelson, Greta Grossman, Arthur Umanoff and Max Bill (photo by Fran Parente).

In Andre Mellone’s office on the western edge of New York’s Chelsea neighborhood, walls are covered by pinned-up floor plans, fabric samples and inspirational images that stretch nearly to the ceiling. Most striking amid all of this, however, are the drawings — atmospheric renderings of interiors that Mellone completes by hand at his desk-mounted drafting table.

“I love to draw,” says the Brazilian-born architect. “That’s my passion.” It also happens to be something he’s very good at it. Long before he established his own architecture and interior design office, Studio Mellone, three years ago, attracting a roster of high-profile creative clients such as fashion designers Thom Browne and Jason Wu, a number of New York’s preeminent designers took note of his artistic skill with a pencil.

After graduating from Syracuse University’s School of Architecture, he landed his first job, at Robert A. M. Stern Architects. “Bob figured out I could sketch, so very early on I was working directly with him and the partners, on concept and design,” says Mellone, noting that the experience put him on an enviable career path right from the outset. In the years that followed, he moved on to Mark Hampton, Ferguson & Shamamian and Sawyer Berson, before going out on his own to focus on freelance illustrations for the likes of Ralph Lauren, Steven Gambrel, Gil Schafer and William Georgis.

He established his current design office when preparing to tackle his first big solo project — his own new home, a combination of two apartments in Chelsea, which he shares with his partner, the art dealer Andre Viana. “It was the first gut renovation I did, with full architecture and interior design,” says Mellone. The resulting residence blends clean architectural lines, including concealed doors and flat-profile moldings, with an eclectic mix of furniture — from Biedermeier dining chairs and an 18th-century Portuguese console to side chairs by Joaquin Tenreiro and an aluminum coffee table by Willy Rizzo. The home became his key portfolio project and soon helped bring in a string of residential clients, including the commission to design one of the penthouses in the same building. 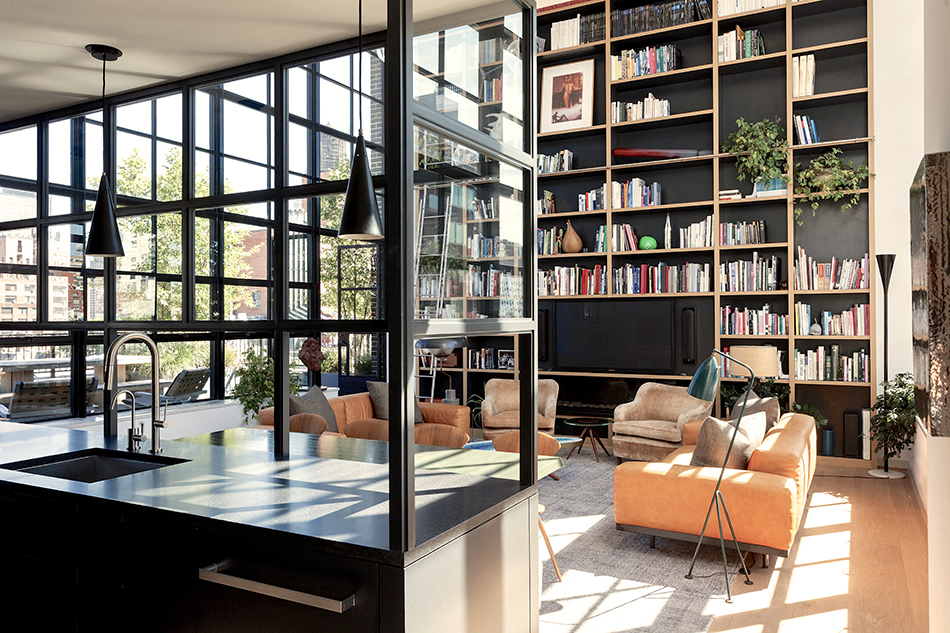 A Chelsea penthouse combines Giò Ponti club chairs, a Greta Grossman reading light, an Angelo Lelli torchère, a dining table by Jean Prouvé and chairs by Norman Cherner. The pendants in the kitchen are Jacques Biny. Photo by Fran Parente 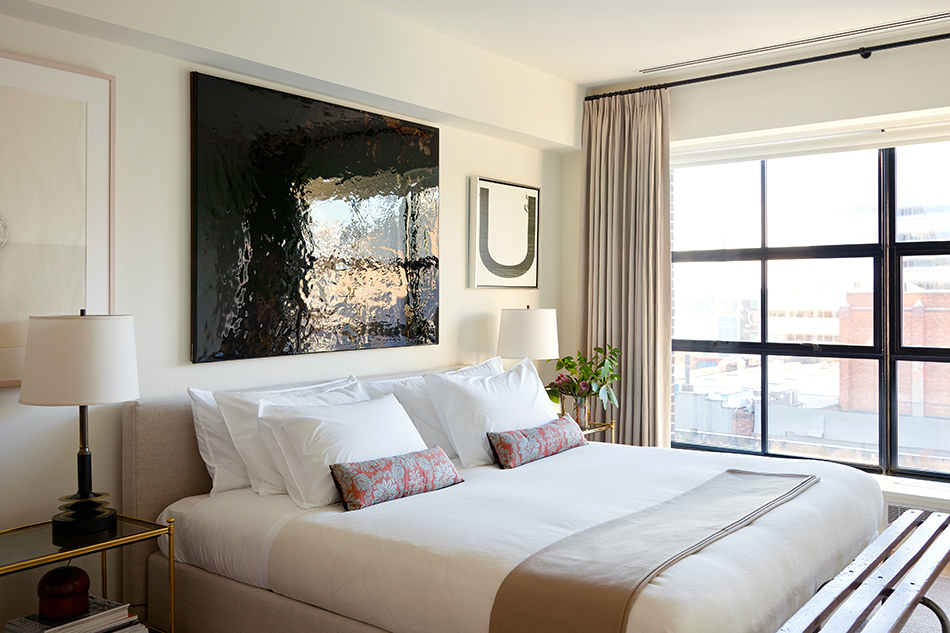 In a Chelsea guest bedroom, the French side tables come from Mallett, while the art is by Cy Twombly, Daniel Adam Turner and Wade Guyton. The two pillows were made using Fortuny fabric, and the blanket is Hermès. Photo by Fran Parente 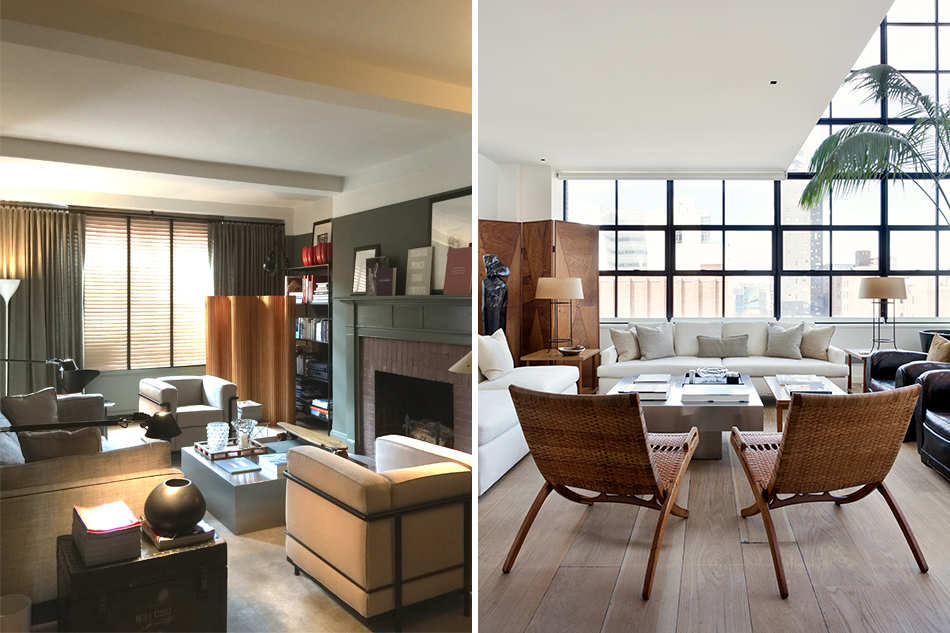 Left: The client’s favorite color, army green, covers most of this pre-war Chelsea apartment, where a contemporary sofa, complements a pair of vintage Le Corbusier club chairs and light fixtures by Max Bill, Arne Jacobsen and Artemide. The wood screen is Alvar Aalto. Right: Mellone finished a Chelsea duplex with side tables, table lamps and a coffee table by T.H. Robsjohn-Gibbings; a center table by Willy Rizzo, folding chairs by Hans J. Wegner and a wooden screen attributed to Ponti. Photos by Fran Parente 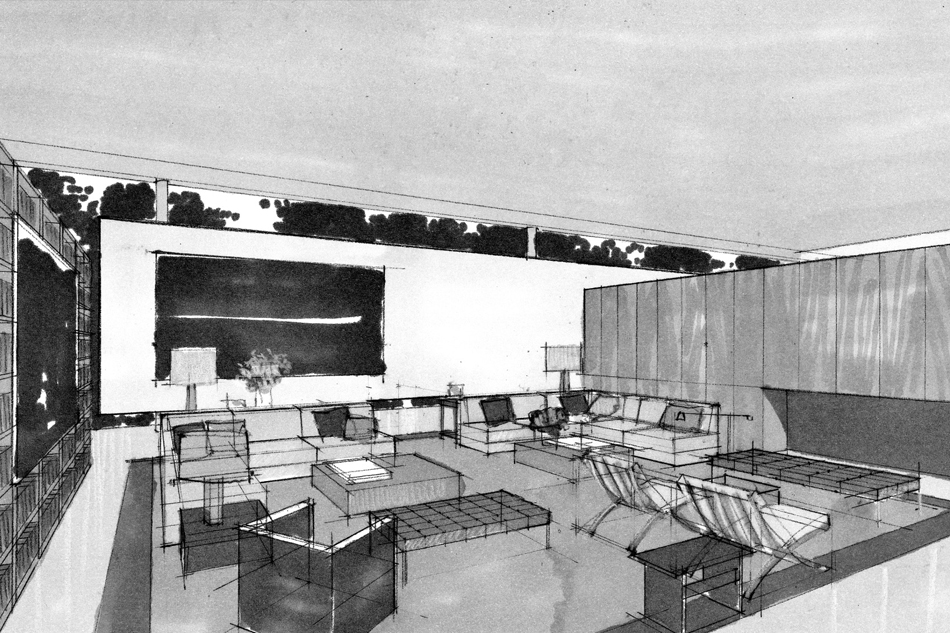 “Sketching is an integral part of our process,” says Mellone. “We draw every room by hand.” A rendering of a residence in the architect’s native São Paulo reveals a living room with a wooden partition inspired by Ludvig Mies van der Rohe. 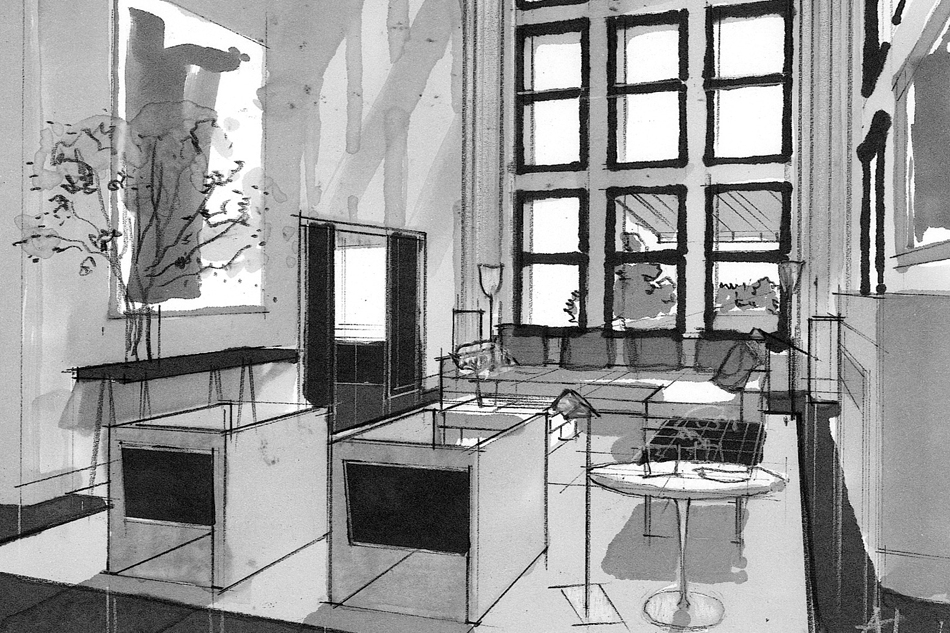 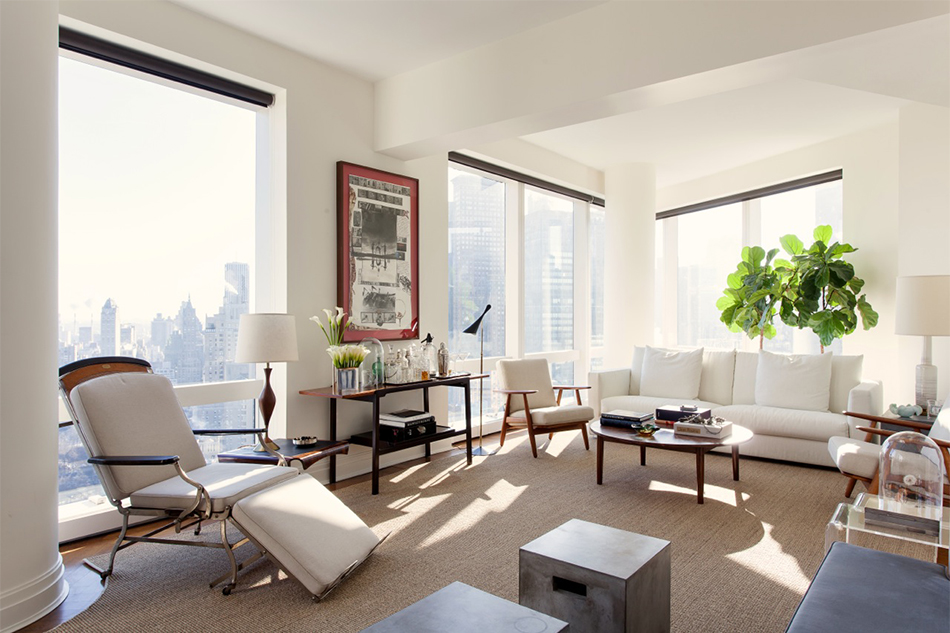 In a clean-lined living room on New York’s Columbus Circle, overlooking Central Park, a Dunbar console doubles as bar, and a small Jorge Zalszupin side table pairs with a chaise from the client’s own collection. The side chairs are by Wegner, and the work above the bar by Peter Beard. Photo by Fran Parente 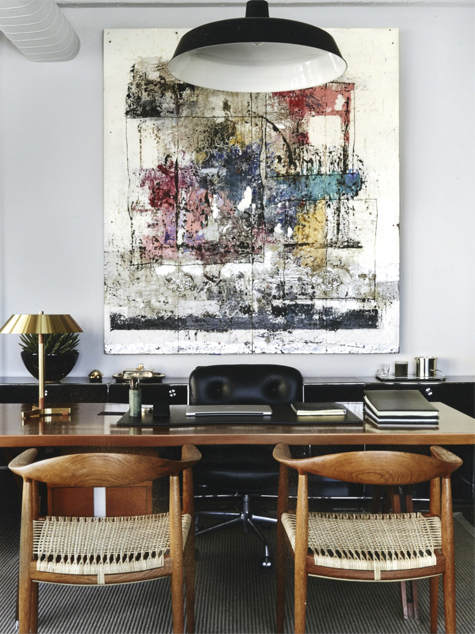 In the offices Mellone shares with his partner, art dealer Andre Viana, Wegner chairs sit opposite an Eames Time-Life chair across an Ico Parisi desk. The desk lamp is by Jo Hammerborg, and the artwork on walls Hugo McCloud. Photo by Cameron Krone

Mellone and Viana’s partnership extends to their professional lives as well — their offices are located in a shared work and gallery space that Mellone designed with glass walls divided by black metal muntins, custom workstations with reeded glass panels and doorways highlighted by thick white-oak portals. “It’s half art gallery, half design studio, but we don’t necessarily work together,” says Mellone. “It’s not a package deal. But, fortunately, a few of his clients have hired me to design their apartments.”

Mellone draws inspiration from a wide variety of sources, but he is most passionate about mid-century modern design. “I feel I have a legitimate claim to it, because I grew up in the 1970s and ’80s,” he says, noting that he was also surrounded by Brazilian design talent as a child. “My father, Oswaldo Mellone, is a famous industrial designer in South America,” he notes. “He worked with all the big guys, including Sérgio Rodrigues and Jorge Zalszupin.”

Today, the younger Mellone remains enthusiastic about using Brazilian furniture when it’s appropriate for a project, but he says he’s just as smitten with modern design from Nordic talents like Hans J. Wegner and German visionaries such as Ludwig Mies van der Rohe. “I just insist on finding an appealing way of doing it right,” he says. “I don’t mind using a Barcelona chair, even though it’s been used in every four-star hotel lobby. I don’t run away from the classics.” 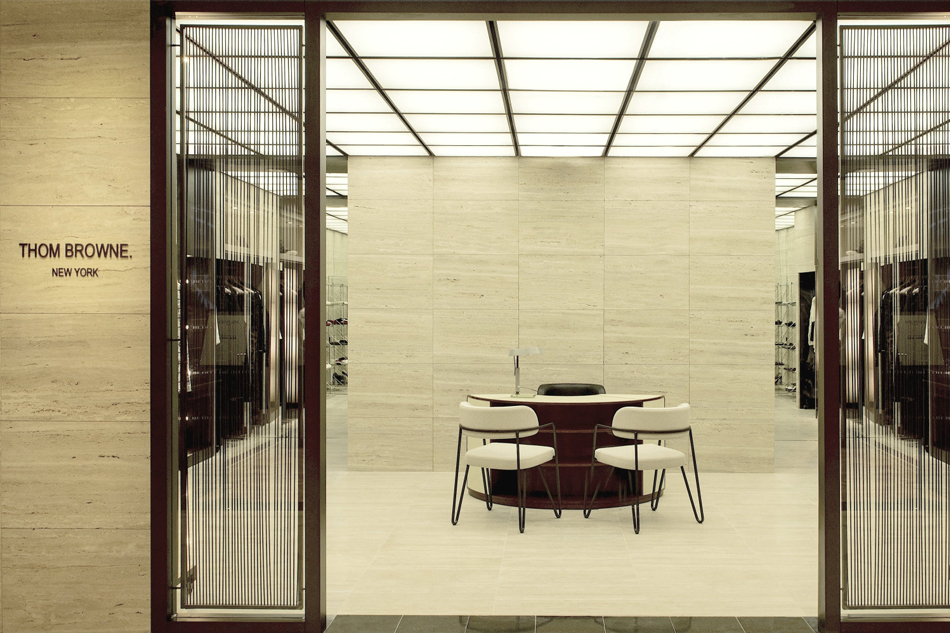 For the first Thom Browne women’s store, in Seoul, Mellone replaced the brand’s usual terrazzo floors and grey marble walls with travertine and bronze. The demilune desk is Edward Wormley, the chairs Jacques Quinet, and the desk lamp Fontana Arte. Photo by Che 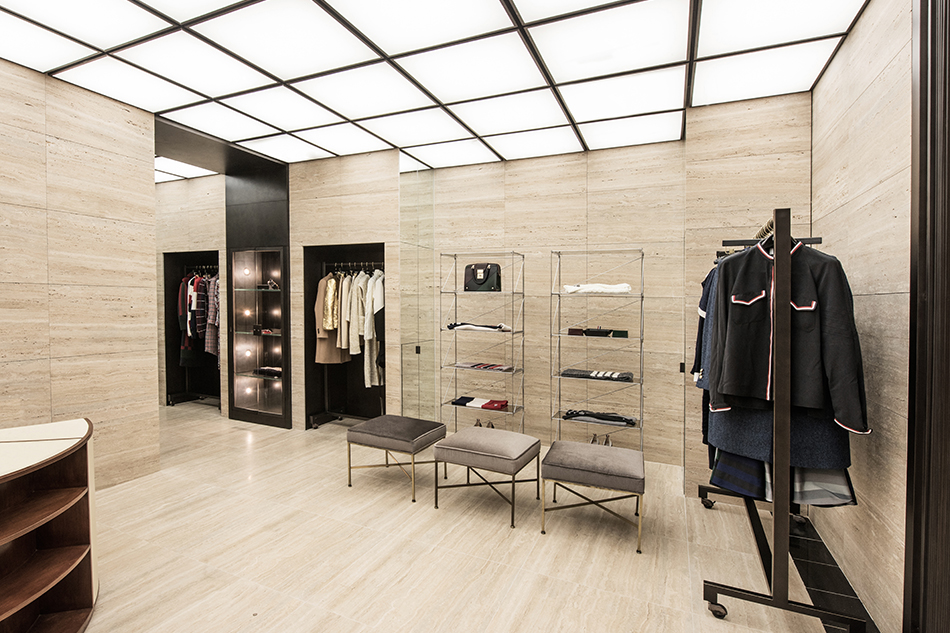 Inspired by 1950s office buildings, Mellone designed the Thom Browne Seoul store with a luminous dropped ceiling that bathes the stone walls and floor in gentle light. The stools are Paul McCobb, the etageres Max Sauze. Photo by Che 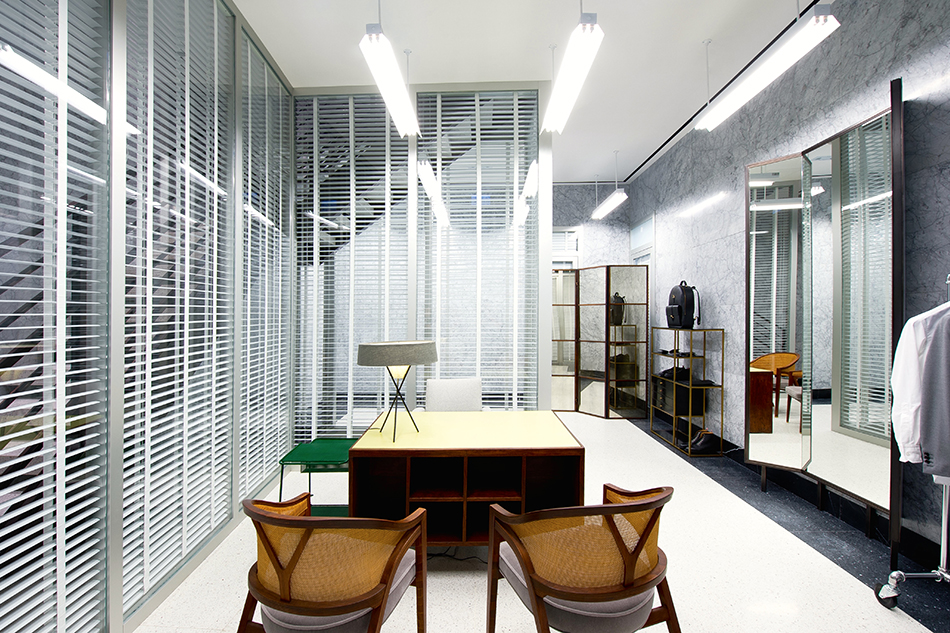 The Thom Browne boutique in Hong Kong has a desk by Pierre Jeanneret, chairs by Wormley for Dunbar, a lamp by Gerald Thurston and a bar cart by Mathieu Matégot. Studio Mellone designed the mirrors. Photo by Joyce Hong Kong 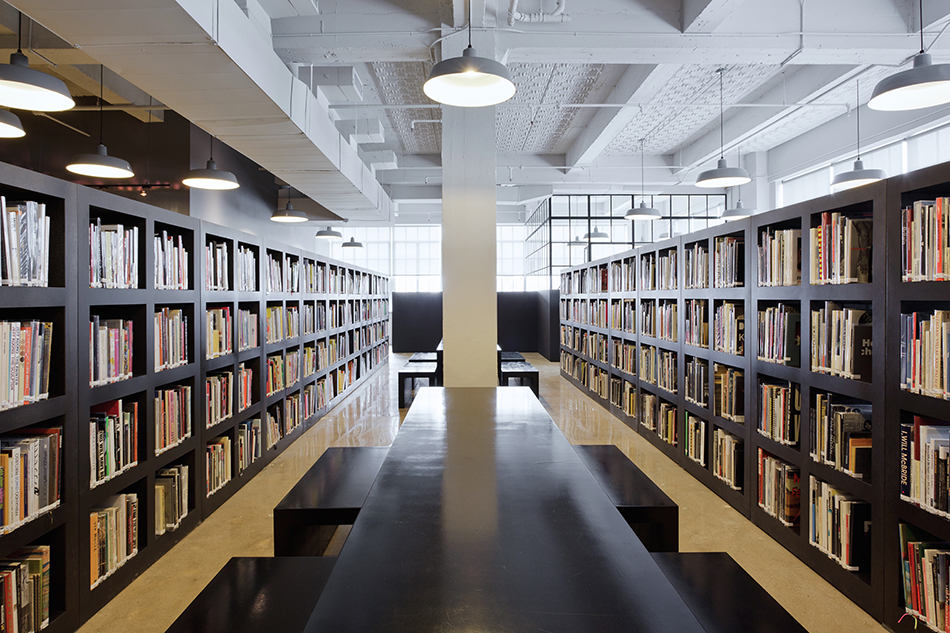 Rigid, rhythmic geometries define the reading room of a creative agency in New York’s West Village. The tables and benches were designed and produced by Studio Mellone. Photo by Fran Parente 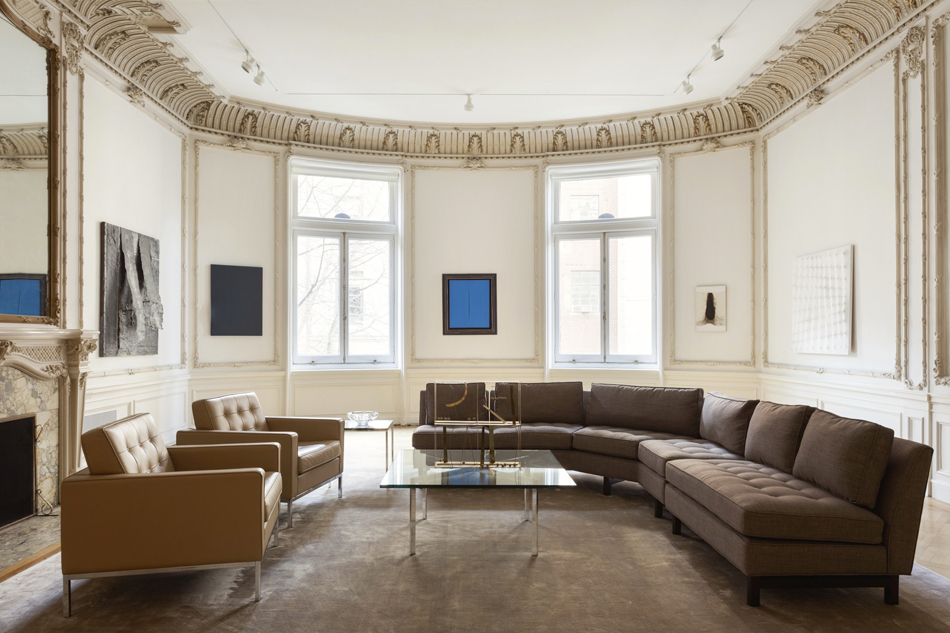 “We felt that the Edward Wormley for Dunbar sectional and the vintage Knoll furniture perfectly combined with any art being showcased,” Mellone says of this gallery and residence on New York’s Upper East Side. Photo by Fran Parente 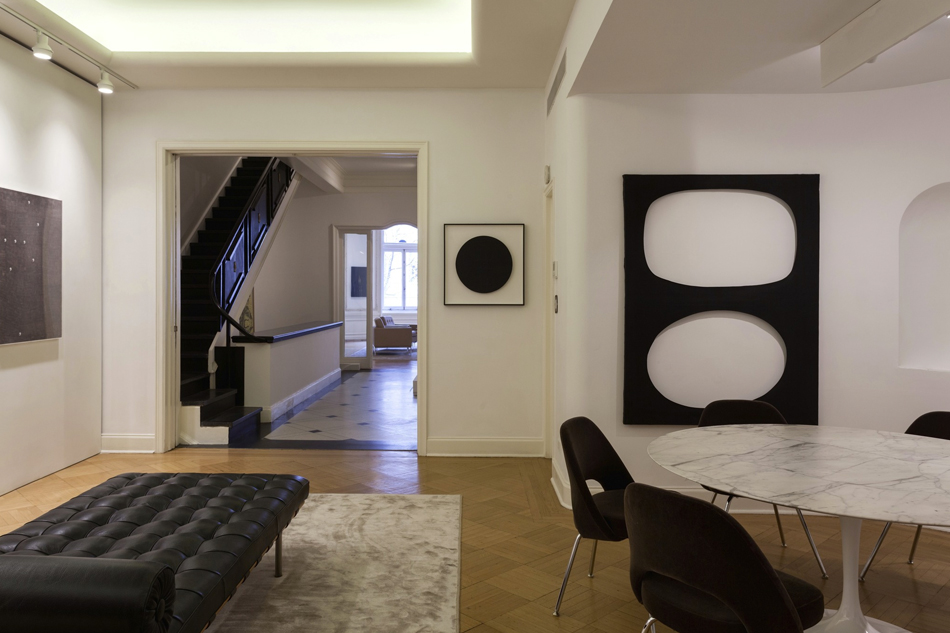 In the dining area of the Upper East Side project, a Mies Van Der Rohe daybed keeps company with a Saarinen table and chairs. Photo by Fran Parente 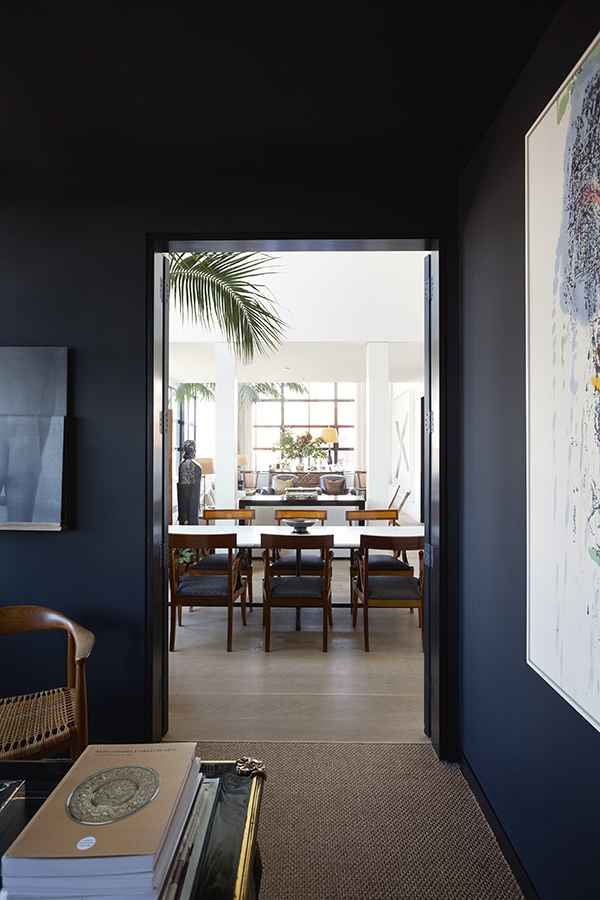 In the Chelsea apartment, a moody, black-painted library connects via French doors to light-filled dining and living areas, featuring a marble-top bistro table and Biedermeier chairs. Photo by Fran Parente

When fashion designer Thom Browne called to discuss an important new project, Mellone was surprised. Browne had previously recruited Mellone to do sketches for special projects of his before the architect established his own studio, but now Browne wanted him to design his first women’s store, in Seoul. “I said yes, but I told him that I had no idea about the rules of retail,” says Mellone. “He said ‘That’s why I want you to do it. I just want you to think of it as a living room.’ ” Taking interior spaces of Mies’s Seagram Building as his inspiration, Mellone echoed the modernist master’s use of ceiling grids, travertine and bronze, while imbuing the store with his own take on pared-down luxury. “It’s a tiny little shop in a mall, but it was a prototype for new materials and a new direction,” says Mellone.

The success of that project quickly led to more commissions, including Browne’s Hong Kong flagship, which opened in April; four upcoming stores in Asia; and a pop-up shop inside Paris department store Le Bon Marché. Now, with an office of seven employees, Studio Mellone takes on an equal mix of residential and retail projects, along with the occasional office project. Recently, for the New York creative director Giovanni Bianco, whose clients include Miu Miu, Versace, and Dsquared2, Mellone designed a loft-like workspace with an art-focused library at its core. By turns convivial and contemplative, it’s a high-contrast, minimalist space that Mellone describes as “part monastery, part locker room.”

On the residential front, Mellone is now at work on a handful of Manhattan apartments, including the home of fashion designer Jason Wu and his partner Gustavo Rangel, as well as a house being built from the ground up in his native São Paulo for which he is handling interiors and consulting on architecture. “I’m very lucky to have really cool clients,” Mellone says. “I’m exhausted, because I’ve never worked so hard in my life, but I couldn’t be happier.” 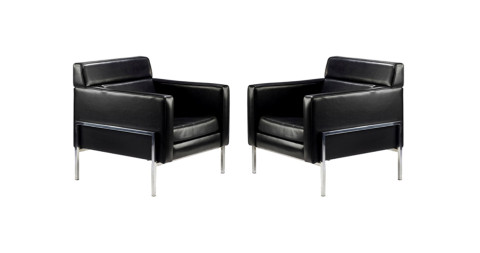 These chairs are different from Pierre Paulin’s more famous chairs — they’re geometric, with great proportions. The design is distilled to a perfect shape. 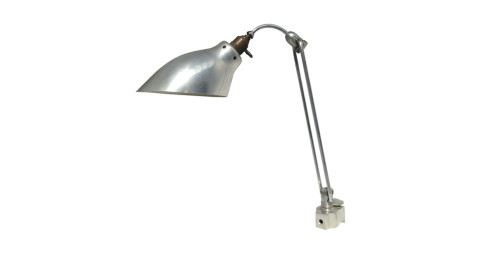 This is just a metal shade, an arm and a clasp — industrial simplicity at its finest. It also reflects studio environments and creativity. 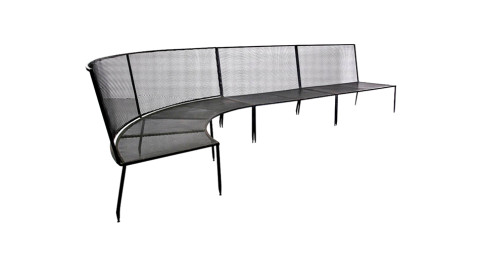 I’m a huge fan of Matégot’s metalworking techniques and his clever and practical designs. This is an unusually large piece with an interesting shape, which would look great with loose cushions. 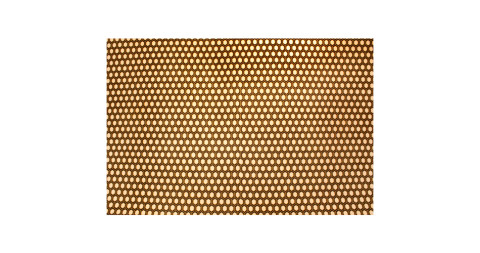 I love this honeycomb design. It would read “futuristic,” if I were living in the ’70s. The pattern is a neutral field from afar, but you have all that great detail and color up close. 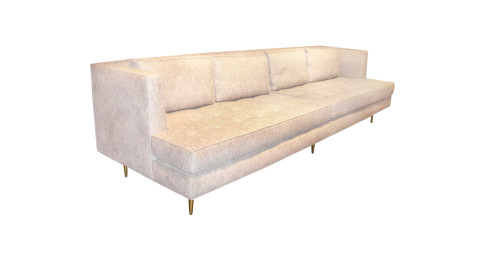 This sofa by Edward Wormley is a great example of mid-century American design that still feels modern. It’s versatile and easy to pair with other things.