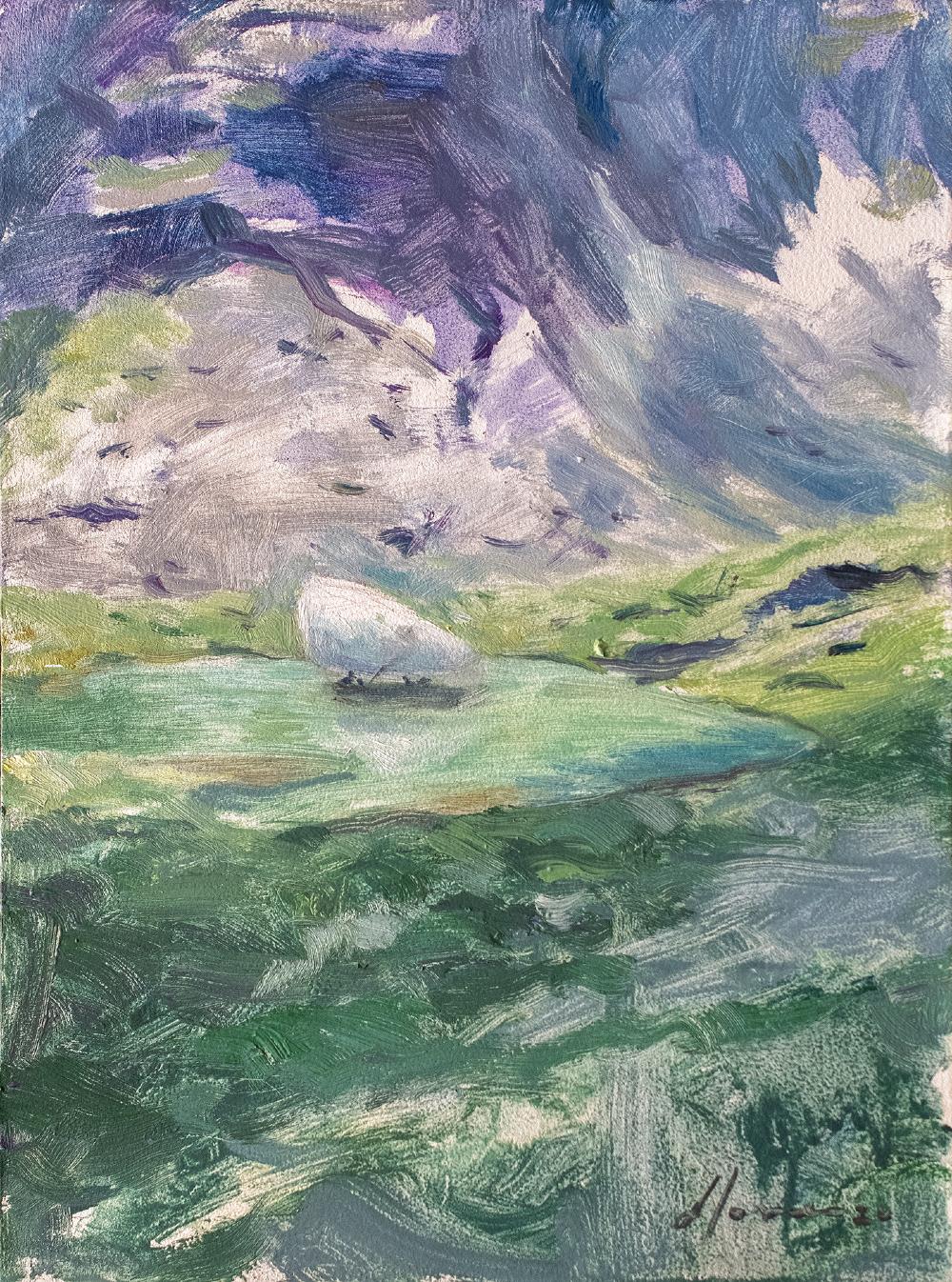 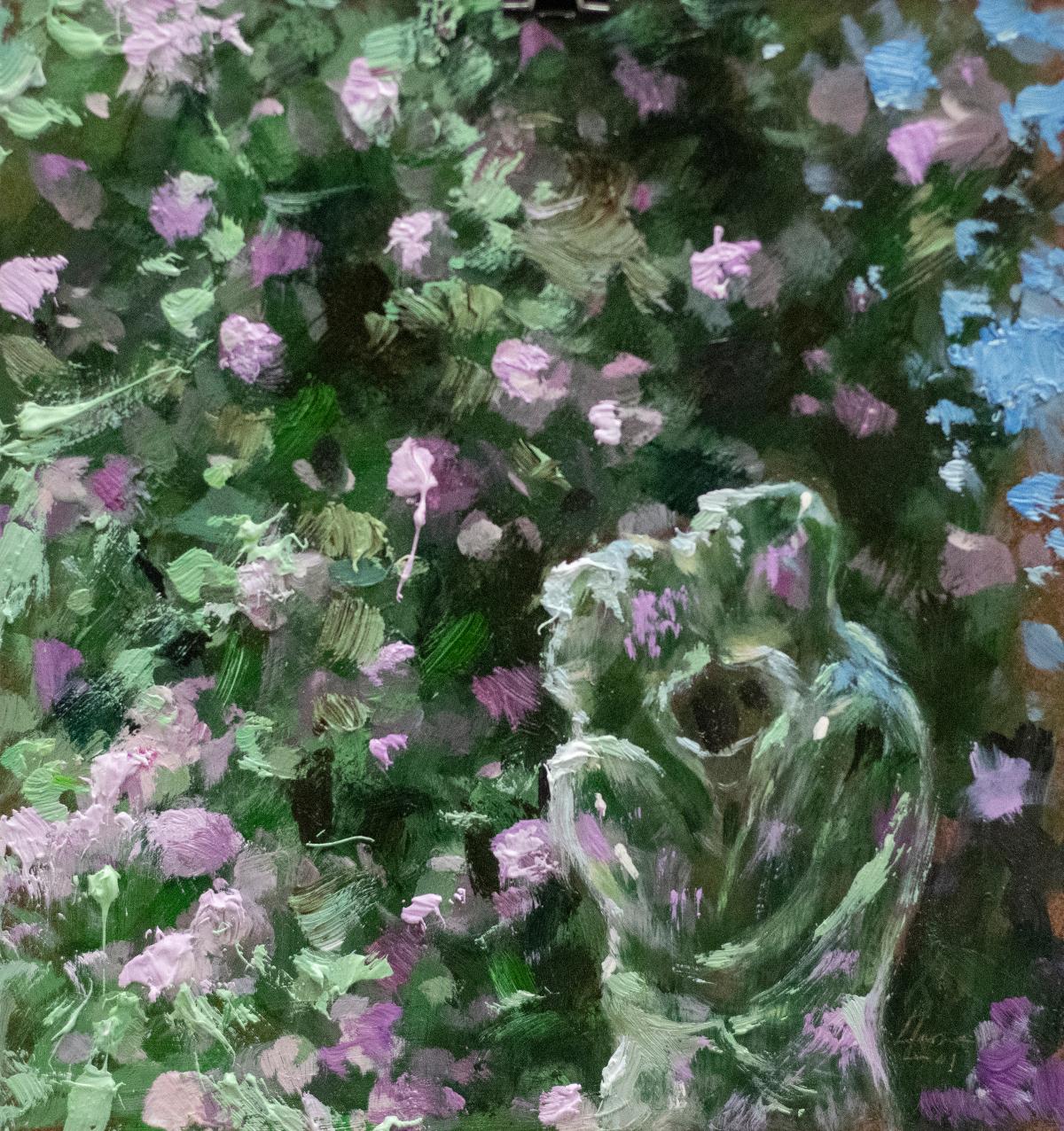 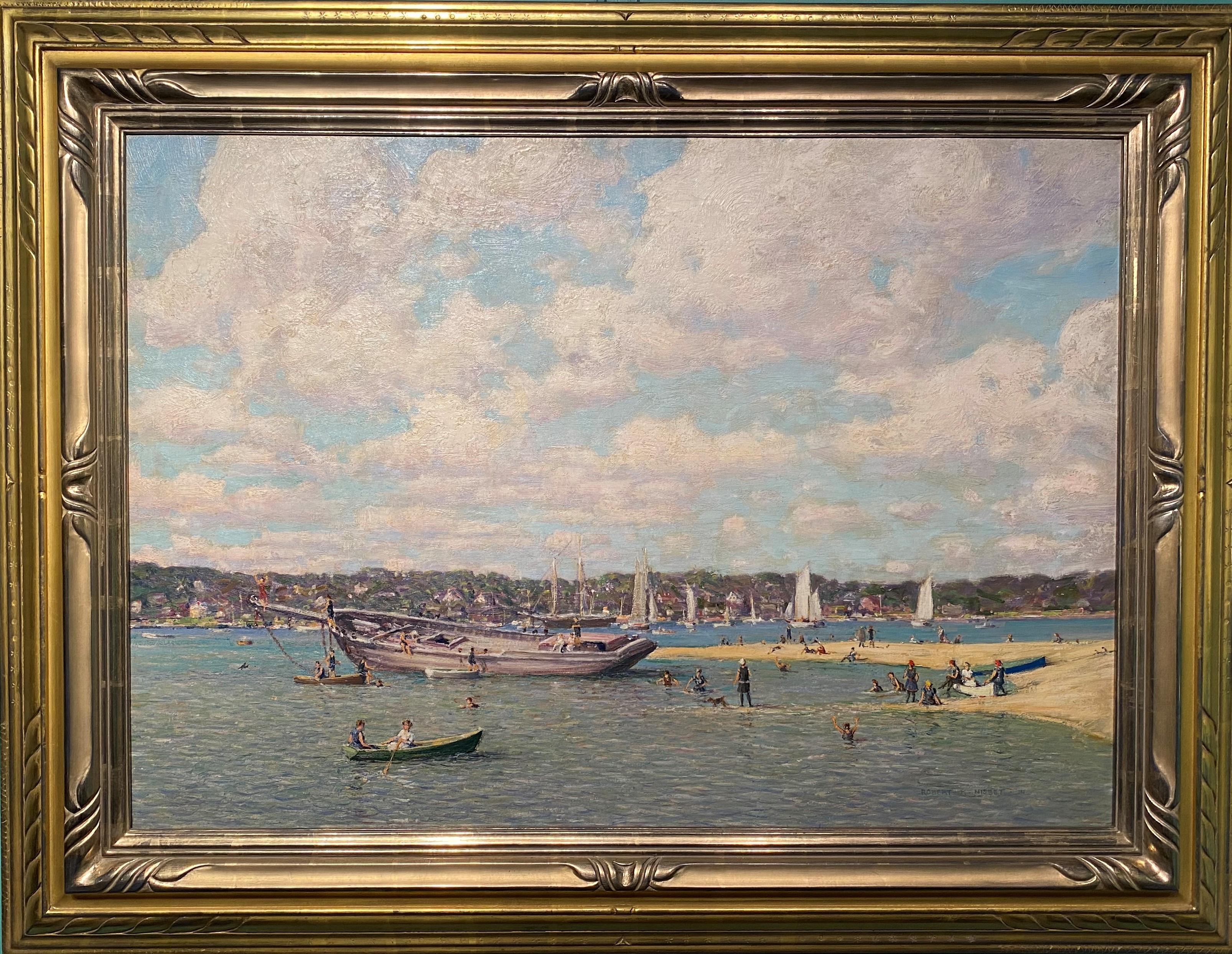 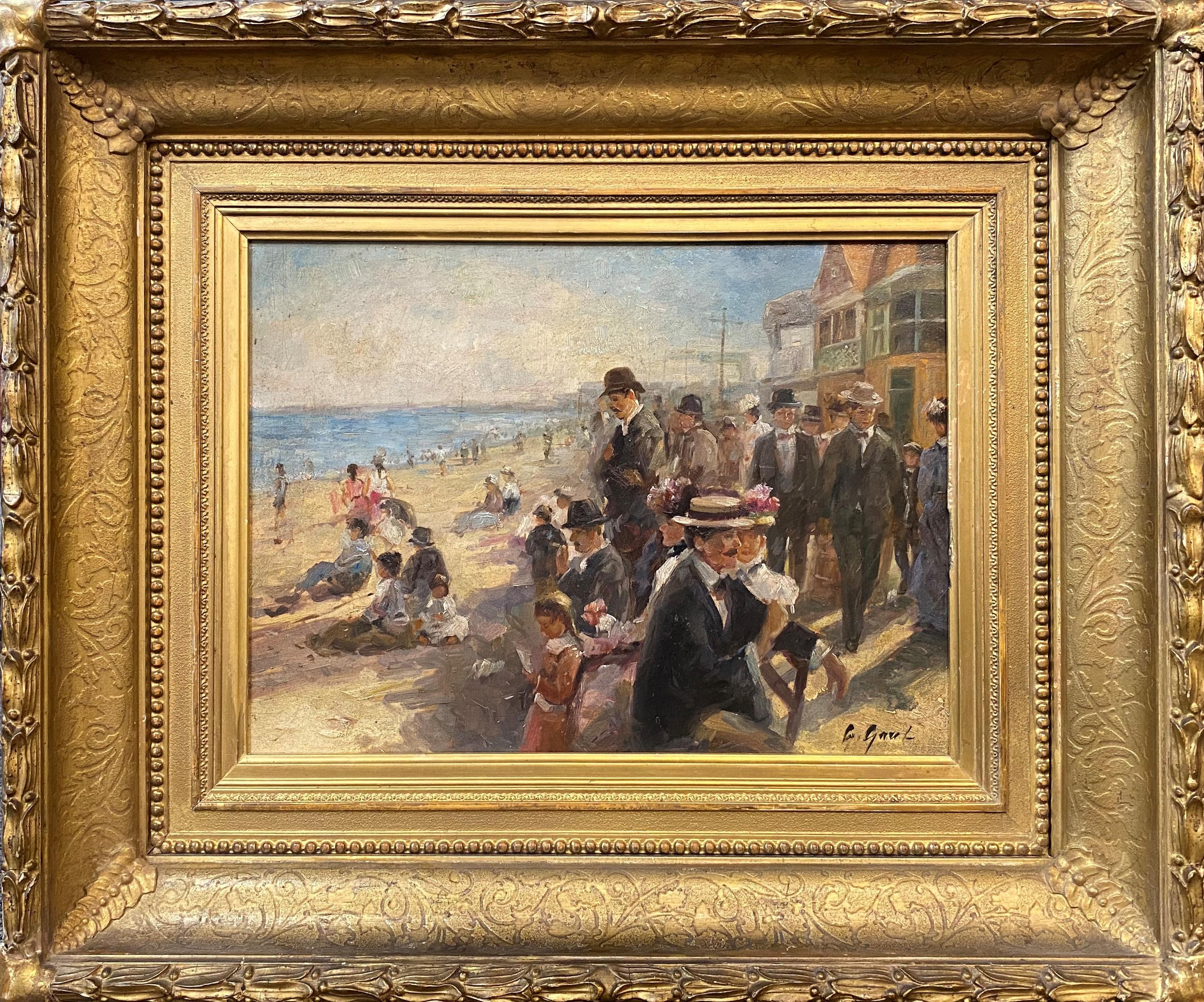 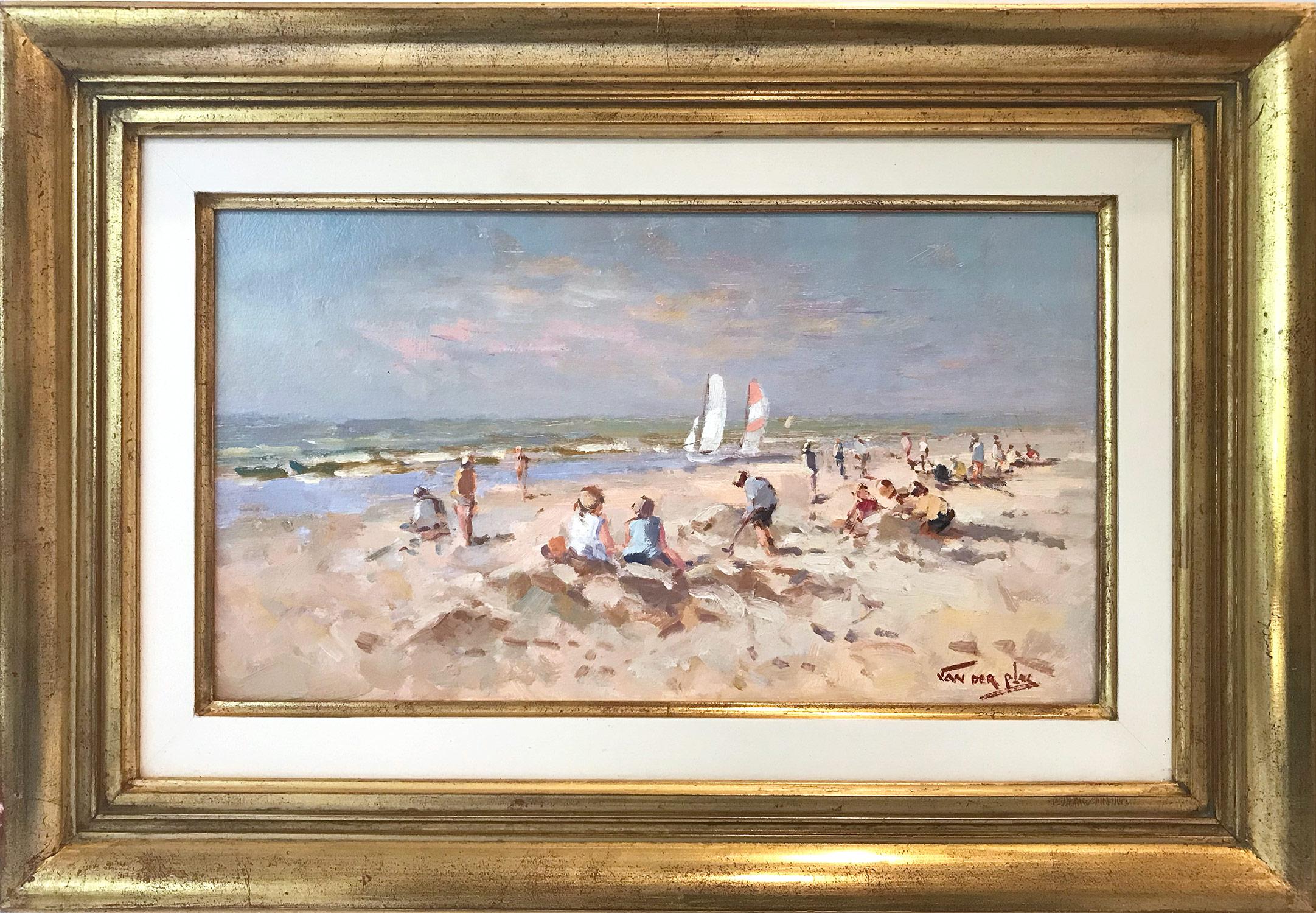 Fritz Schider
19thC German Impressionist, At the Chinese tower in the English garden in Munich 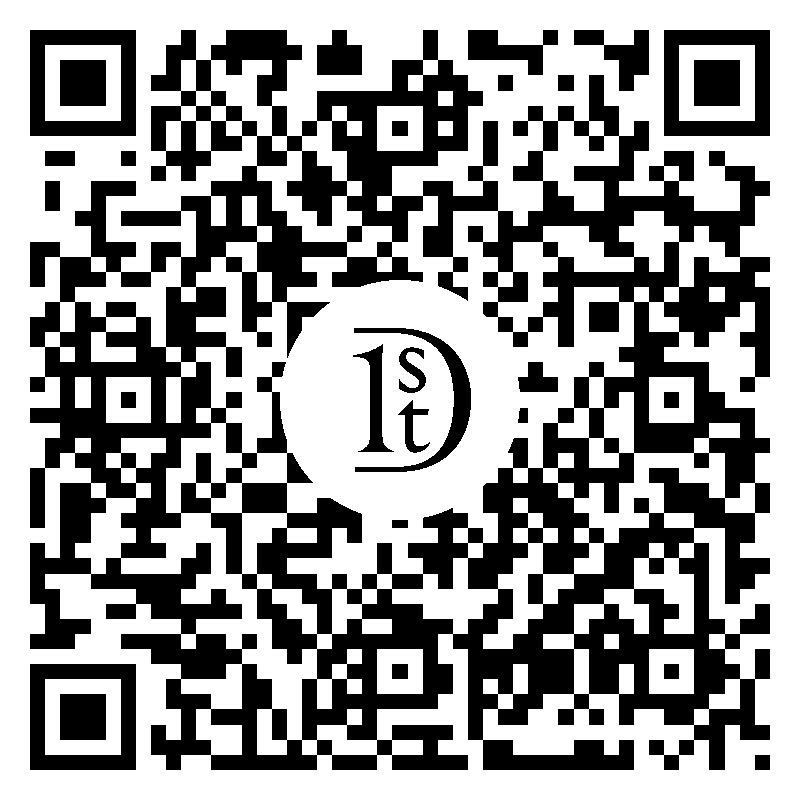 Important 19thC German Impressionistoil sketch for, 'At the Chinese tower in the English garden in Munich' Currently in the Lenbachhaus Museum, Munich. In 1865, Schider decided to pursue a career as an artist and enrolled at the Academy of Fine Arts Vienna. There, he studied with Alexander von Wagner, Arthur von Ramberg and Wilhelm von Lindenschmit. A year later, he accompanied his friend Hans Makart to Munich and entered the Academy of Fine Arts there. At that time, he came under the influence of Wilhelm Leibl and joined the artists' group known as the Leibl-Kreis [de]. He was also an admirer of Theodor Alt and the early works of Albert von Keller. In 1877, he married Lina Kirchdorffer (1854–1927), one of Leibl's nieces. In 1876, he accepted an offer from the "Gesellschaft für das Gute und Gemeinnützige" in Basel and became a teacher at the company's drawing and modeling school. His students there included Burkhard Mangold, Wilhelm Balmer, Max Buri, Numa Donzé and Carl Burckhardt . He was also employed by Julius Kollmann to help him with his Plastische Anatomie des menschlichen Körpers. Ein Handbuch für Künstler und Kunstfreunde (Anatomy for Artists). He later created his own large anatomy atlas, Plastisch-anatomische Studien für Akademien, Kunstgewerbeschulen und zum Selbstunterricht, which was published in installments from 1891 to 1894. In 1885, he became a citizen of Basel. For his anatomical work with Kollmann, and independently, he was named an Honorary Doctor in the medical faculty at the University of Basel in 1896. This painting was in the Important Continual Pictures sale in Christie's on 17 March 1989 (Sale 4012 lot 65) with an estimate of £3,000-£5,000 and made £3,000. (£3,300 with premium) It is a sketch for the picture illustrated in Bruckmans Lexikon der Munchner Kunst, 1983, IV, p 34.

Diamond Seller
These expertly vetted sellers are 1stDibs' most experienced sellers and are rated highest by our customers.
Established in 1983
1stDibs seller since 2016
204 sales on 1stDibs
Typical response time: 1 hour
More From This Seller