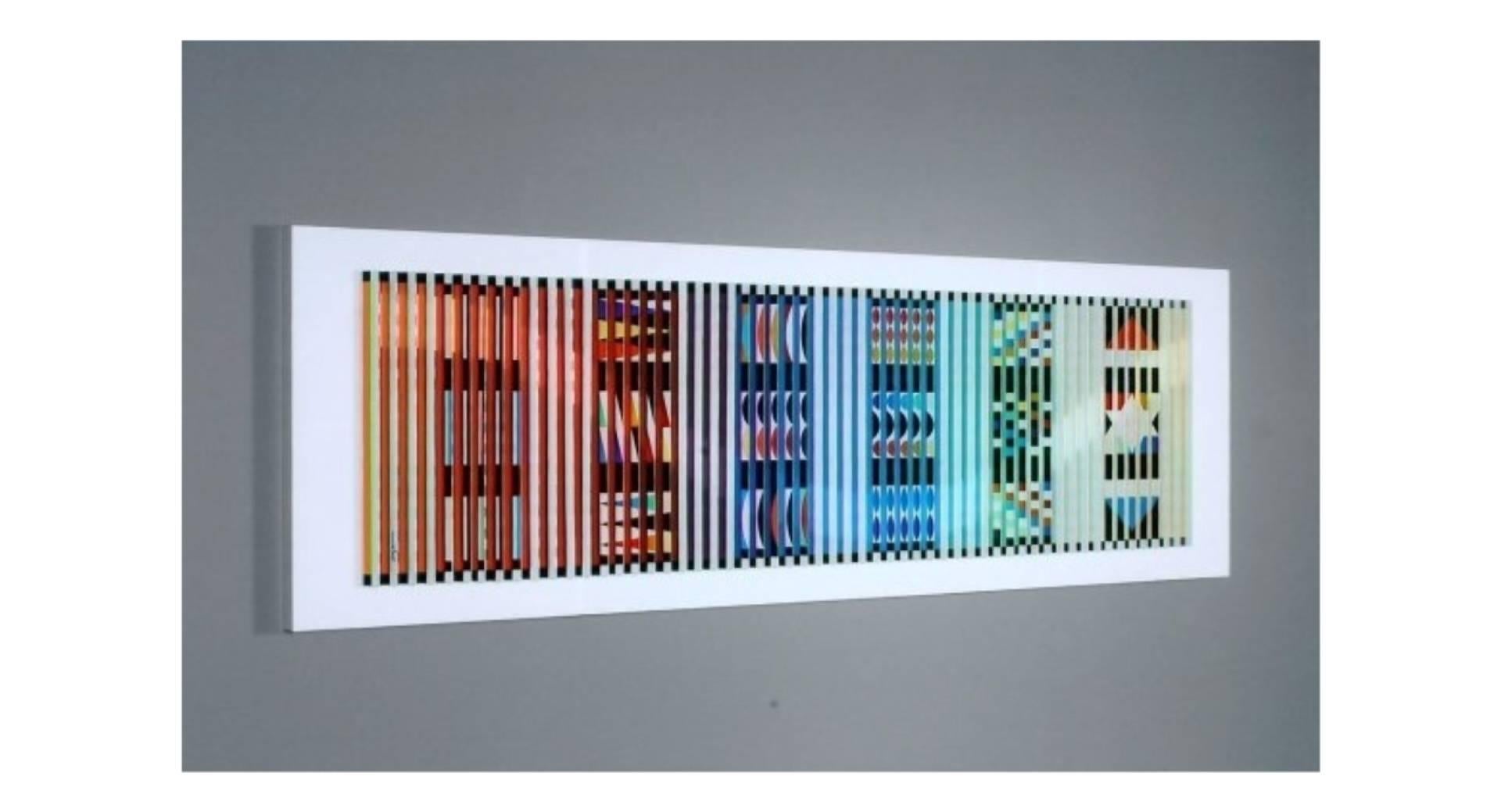 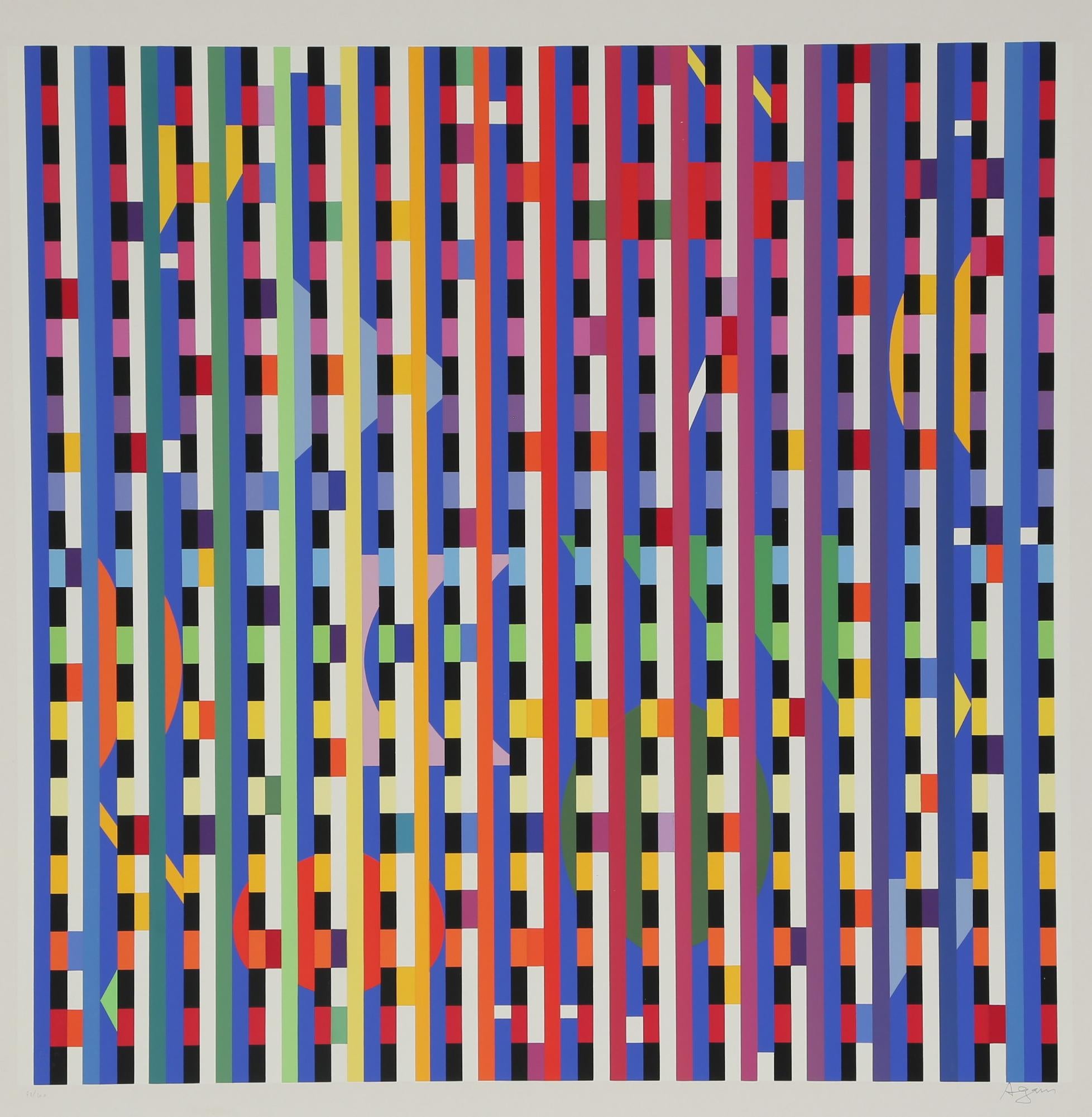 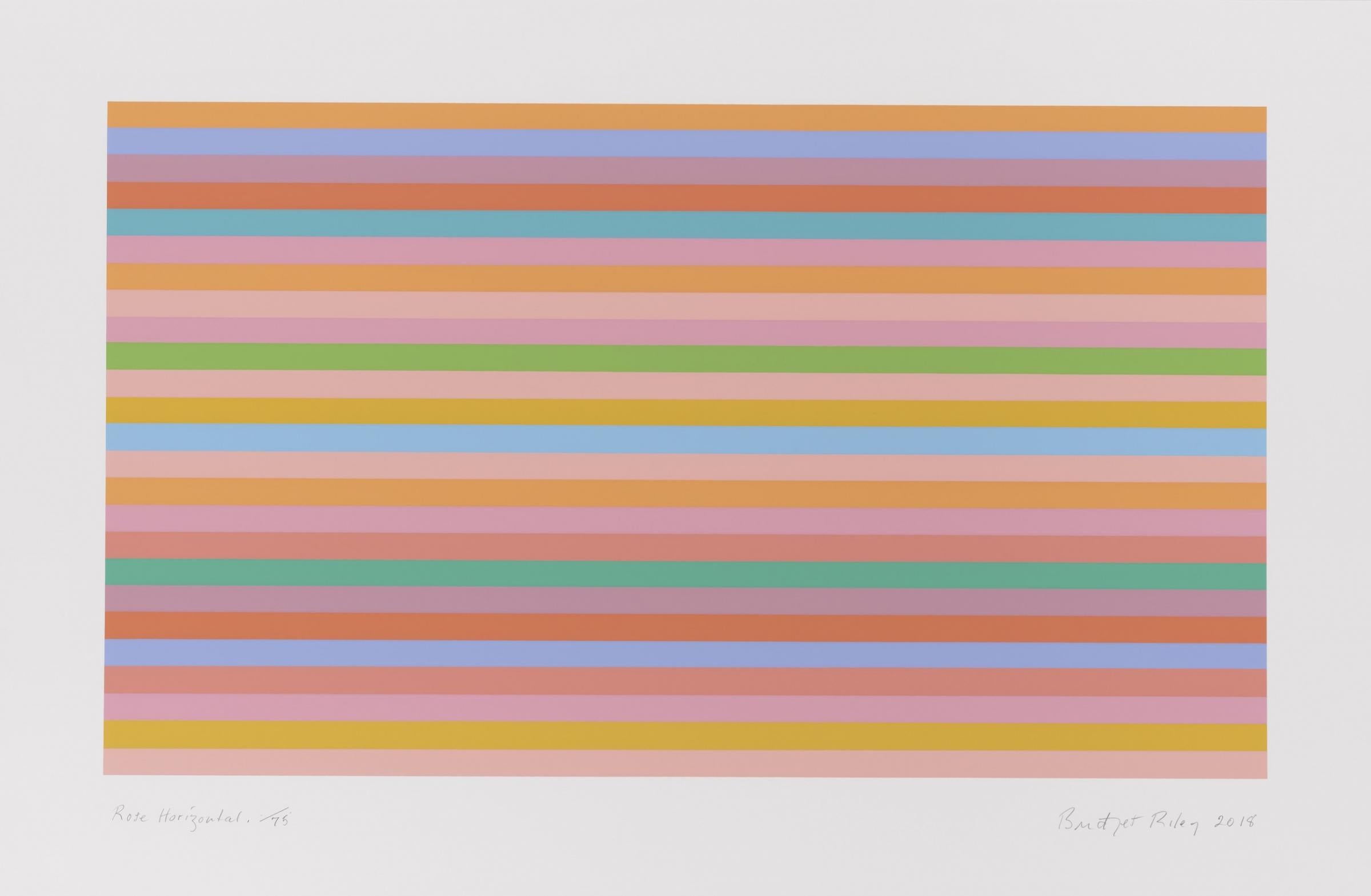 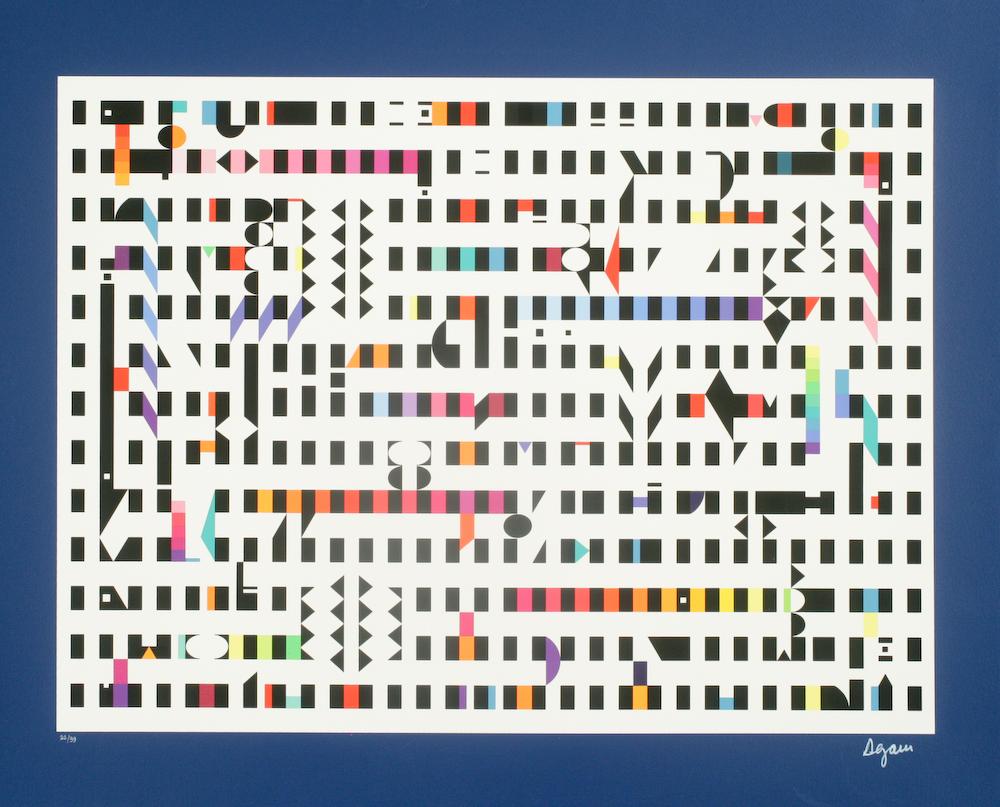 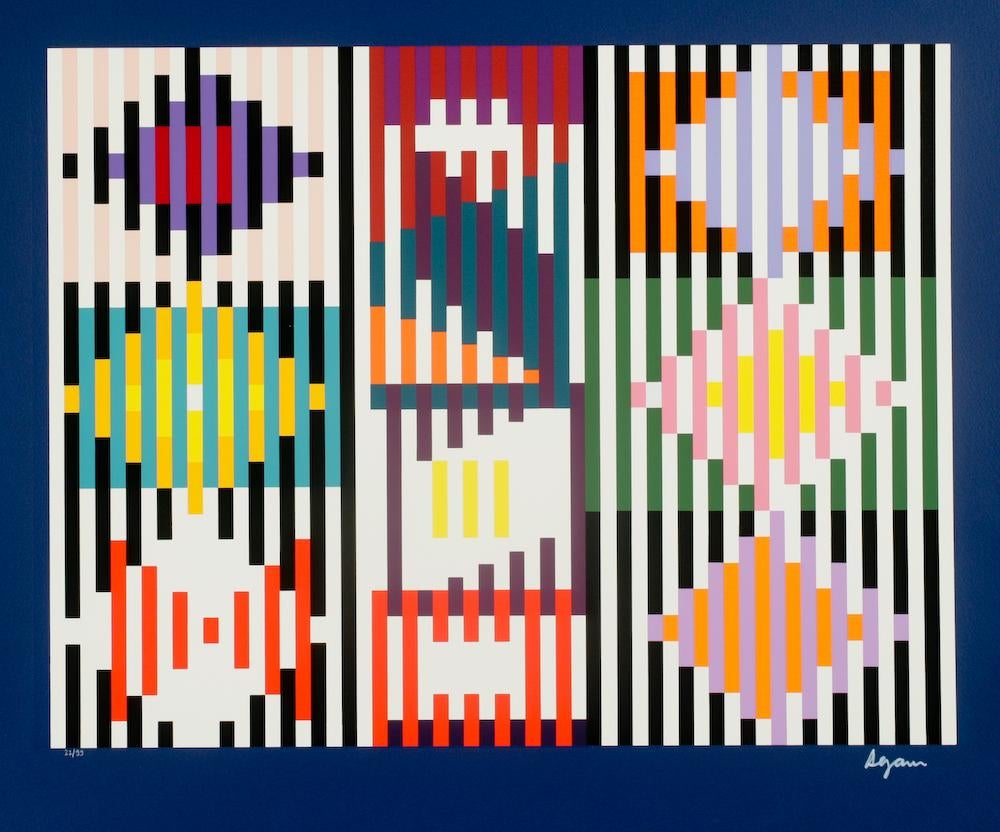 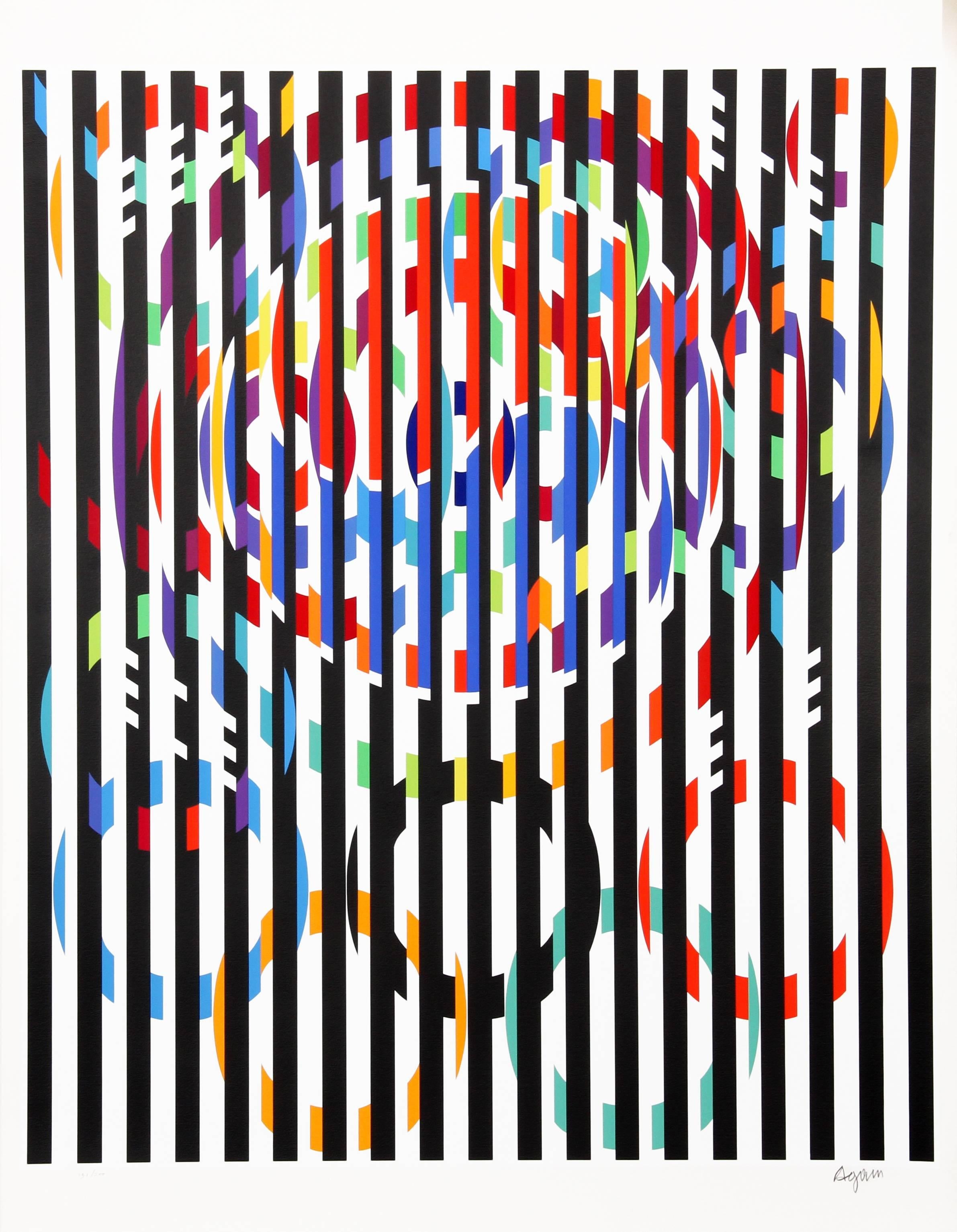 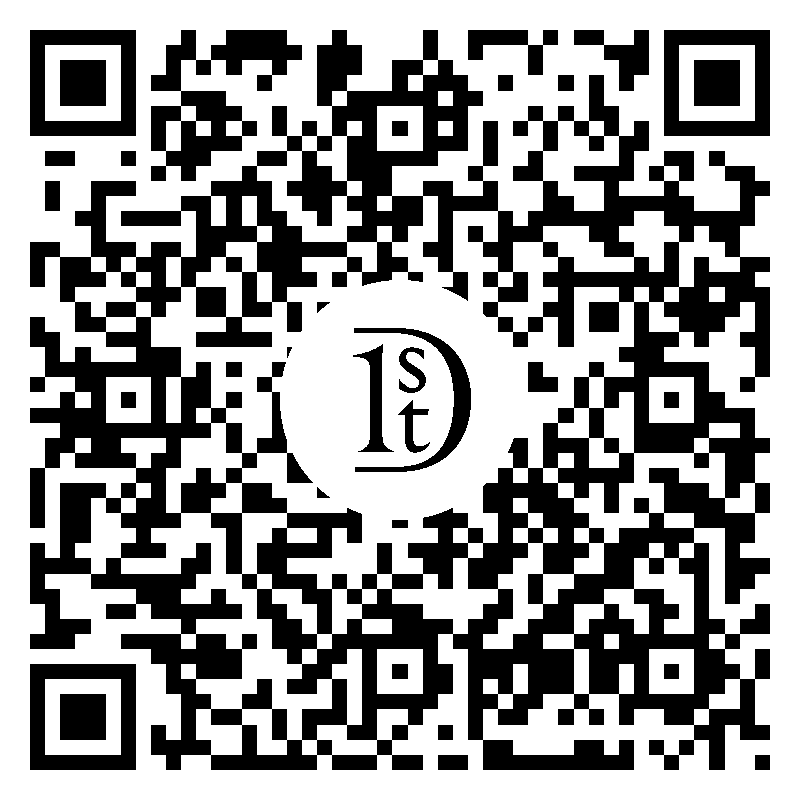 This is a large hand signed serigraph silkscreen, pencil numbered in Roman numerals. biographical info: The son of a rabbi, Agam can trace his ancestry back six generations to the founder of the Chabad movement in Judaism. in 1946, he entered the Bezalel Academy of Arts and Design in Jerusalem. Studying with Mordecai Ardon, a former student at the Weimar Bauhaus. Agam has been associated h with “abstract” artists, “hard edge” artists, and artists such as Josef Albers and Max Bill. Others find in Agam’s work an indebtedness to the masters of the Bauhaus. Agam’s approach to art, being conceptual in nature, has been likened to Marcel Duchamp’s, who expressed the need to put art “at the service of the spirit.” And, because of Agam’s employment of motion in his art, he has been compared to Alexander Calder, the artist who put sculpture into motion. (Motion is not an end, but a means for Agam. Calder’s mobiles are structures that are fixed, revolving at the whim of the wind. In a work by Agam, the viewer must intervene.) Agam has also been classified as an “op art” artist because he excels in playing with our visual sensitivities. Agam went to Zurich to study with Johannes Itten at the Kunstgewerbeschule. There, he met Frank Lloyd Wright and Siegfried Giedion, whose ideas on the element of time in art and architecture impressed him. In 1955, Galerie Denise René hosted a major group exhibition in connection with Vasarely's painting experiments with movement. in addition to art by Vasarely, it included works by Yaacov Agam, Pol Bury, Soto and Jean Tinguely, among others. Most Americans were first introduced to Vasarely by the groundbreaking exhibition, "The Responsive Eye," at New York's Museum of Modern Art in 1965. Josef Albers, Richard Anuszkiewicz. The show confirmed Vasarely's international reputation as the father of Op art. Agam has sought to express his ideas in a non-static form of art. In his abstract Kinetic works, which range from paintings and graphics to sculptural installations and building facades. Agam continually seeks to explore new possibilities in form and color and to involve the viewer in all aspects of the artistic process. Thus, for the past 40 years, Yaacov Agam’s pioneering ideas have impacted developments in art, (painting, monoprint, lithograph and agamograph) architecture, theatre, and public sculpture. Reflecting both his Israeli Jewish heritage and his involvement with leaders of the Bauhaus and Surrealist movements, Agam’s works have influenced generations of modern artists. He has participated in shows all over the world and has had many one-man exhibitions, including the retrospective exhibition held at the Musee National d'art Moderne in Paris (1972), which was then shown at the Stedelijk Museum in Amsterdam, Stadtische Kunsthalle in Dusseldorf, and Tel Aviv Museum. Another large-scale retrospective exhibit was held at the Guggenheim Museum in New York (1980). He had a large one-man exhibition at the Museum of Pontoise (1975), the Palm Spring Desert Museum, California, on an occasion of the inauguration of the museum (1976), the Museum of Art Birmingham, Alabama (1976), the Museo de Arte Modemo, Mexico (1976), the National Museum of Art, Cape Town, South Africa (1977). The retrospective exhibition was held at the lsetan Museum in Tokyo, Daimaru Museum in Osaka and Kawasaki City Museum in Japan (1989), and at the Museo Nacional de Bellas Artes in Buenos Aires Argentina (1996). He also held an exhibition "Selected Suites" at the Jewish Museum, New York (1975). Agam has also had many one-man shows in art galleries since 1953, including Denise Rene Gallery, Paris (1956), MarIborough-Gerson Gallery, New York (1966), Gallery Denise Rene, New York (1971) 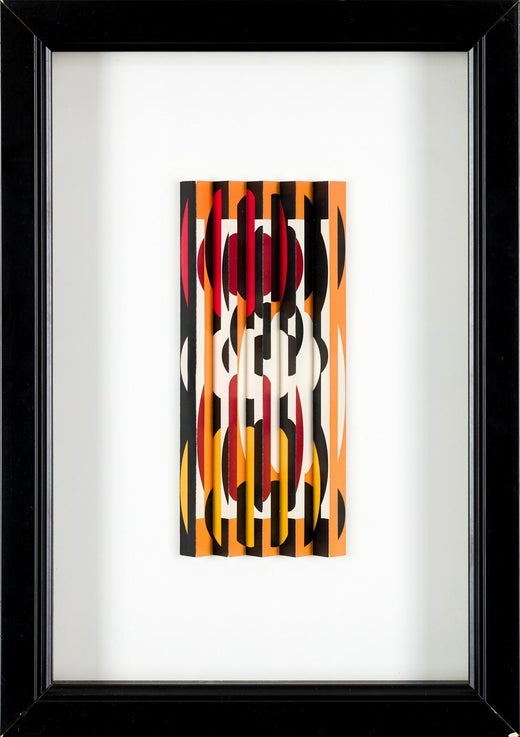 About the Seller
4.9 / 5
Located in Bal Harbour, FL
Platinum Seller
These expertly vetted sellers are 1stDibs' most experienced sellers and are rated highest by our customers.
Established in 1995
1stDibs seller since 2014
1,096 sales on 1stDibs
Typical response time: 1 hour
More From This Seller

“Union" Suite of 3 Limited Edition Hand-Signed Serigraphs by Yaacov Agam, Framed
By Yaacov Agam
Located in Los Angeles, CA
"Union," a suite of three original silkscreens by Yaacov Agam, are pieces for the true collector. Agam is considered the father of Kinetic art. His iconic style is recognizable acros...
Category

Yaacov Agam
Double Metamorphosis I , circa 1979