Can You Guess What this Mystery Object Was Used For?

At 1stdibs, we see beautiful and historically valuable examples of art and design each day — some of which intrigue us, baffle us or prove that we haven’t seen it all. In The Study’s Mystery Objects column, we look at an extraordinary offering from the 1stdibs inventory and reveal its intended (but not totally obvious) purpose. 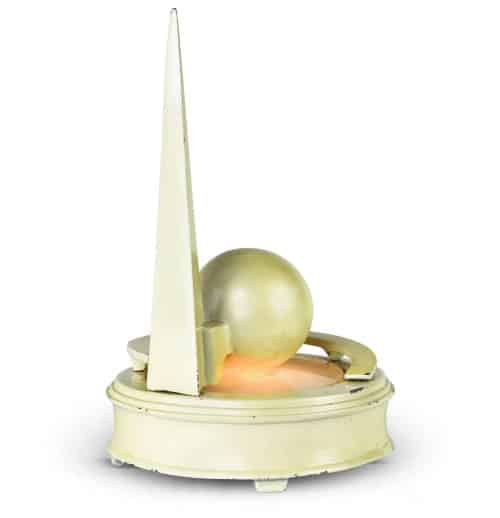 Is it an Art Deco sculpture, serving piece or modernist candle? With its confounding structures — one a perfectly round sphere and the other triangular — resting on a translucent panel of glass, this mysterious object could easily be any or none of those things.

It’s actually a collectible table lamp, says Lucia Howard, the owner of Piraneseum, a San Francisco gallery that’s a leading source of antique and vintage Grand Tour souvenirs — those exquisite architectural models, drawings and etchings made from the 17th to early-20th centuries for wealthy tourists to remember their travels through Europe.

The lamp was exclusively made for the New York World’s Fair of 1939, which featured two distinctive theme buildings, the Trylon and Perisphere. Designed by architects Wallace Harrison and Andre Fouilhoux, the Trylon, a three-sided pylon, stood 610 feet high while its companion measured 185 feet in diameter. Howard says the structures built in Flushing Meadows Park, in Queens, New York, were so huge, “you could see them for miles.”

Inside the Perisphere, a diorama called Democracity depicted a utopian city of the future, which could be viewed from above on a moving sidewalk. Though meant to be temporary, both structures became enduring symbols of the 1939 fair, whose theme was “The World of Tomorrow.” That year, the U.S. issued a postage stamp of the icons, and they appeared on a wide range of other promotional materials, including the lamp. “There were a lot of paperweights, salt and pepper shakes, things like that,” Howard says. “But this particular lamp is extremely unusual. I’ve hardly seen one like it.”

It’s key to remember lamps were popular during that period because the technology wasn’t highly developed. “Light was just so fascinating to people back then,” she says, “the drama and technology of it. Lots of colored lights were coming in and in use at the world’s fairs. It was a time to experiment.” The lamp may even replicate how the Trylon and Perisphere were lit.

Another reason the lamp made a good souvenir was its utility. “These souvenirs aren’t just meant to help you remember, they have the quality of being useful,” Howard says. “It does work as a nightlight.”

Given the fair’s popularity, it’s not hard to imagine a parent bringing this sort of gift home to a child — or for a child to have selected it on her own. “I constantly meet people who went to the fair when they were a toddler,” Howard says, wistfully. “The lamp is kind of a toy and has a fun component to it.”