Timeline of a Tanline: 15 Events that Forever Changed Women’s Swimwear 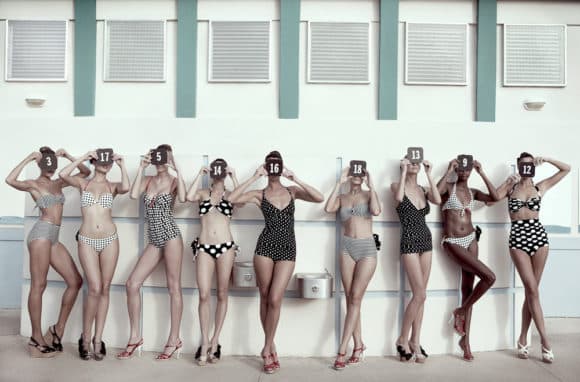 For centuries, men were free to bathe in the buff at the seaside while women were forced to, literally, swim in voluminous bathing gowns that not only restricted their physical movement but created danger of drowning. Ironically, in the mid-19th century, just as a ban against swimming nude finally forced men to cover up, the women’s bathing gown was on the brink of becoming much more revealing.

From Victorian deathtraps to the barely-there monokini, the extreme transformation of women’s swimwear over the past century and a half is not only evidence of changing aesthetic taste, but also of social upheaval. Here we count 15 key events — as disparate as the birth of rail travel and the invention of the thong — that are each crucial to the evolution of women’s swimwear. 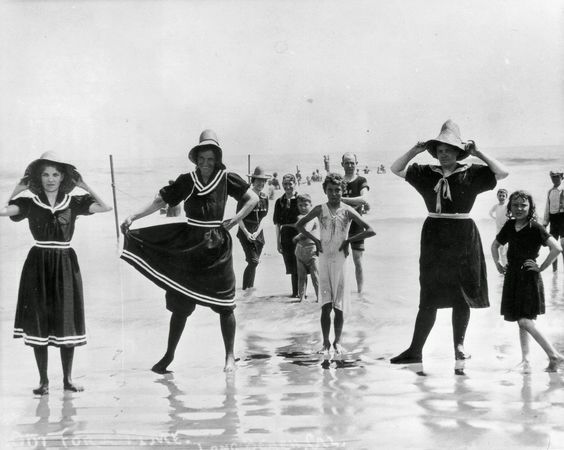 Beachgoers in Santa Monica, California circa 1890.

How it impacted swimwear: Transformed swimming into a recreational activity and spread it to the masses

Before the mid-1800s spending time at the seaside was something you did to treat your gout, not something you did for pure relaxation and enjoyment. It was the advent of the steam locomotive that first propelled the population to the coast and transformed swimming into recreation for the masses, although strict modesty laws still forbade women to bathe in anything that would reveal their form, prompting many women to go to the length of sewing lead weights in their hems to prevent the fabric from rising up to reveal a scandalous glimpse of their calves.

2. Bloomers in the Mid-19th Century

How it impacted swimwear: First major revolution in safe, active swimwear for woman.

Toward the end of the 19th century, an advocate in the Rational Clothing Movement, Amelia Bloomer, pioneered the Princess Suit. Comprised of a dress worn over pantaloons, or bloomers, as they would be named after their inventor, the new garment allowed for fluid movement in the water. As social mores loosened, hemlines were raised — but patrolmen would still survey the beaches and arrest any women whose bloomers didn’t measure up.

How it impacted swimwear: Emphasis on the female physique

The very first recorded “bathing beauty” pageant is held in Rehoboth Beach, Delaware, with the illustrious Thomas Edison playing judge. This truly marks the start of a new era when the bathing suit would become increasingly more about emphasizing the female physique rather than covering it up. Ironically, the racy Hawaiian Tropic Bikini Pageants would make their debut exactly a century later.

How it impacted swimwear: Created public awareness for the need for safer and more practical swimwear for women

Although bloomers were beginning to free up women’s movements in the water, strict public decency laws made the march toward the modern swimsuit more like a slow, arduous swim upstream. In 1907 champion swimmer Annette Kellerman was arrested for wearing a cheeky, formfitting one-piece while demonstrating her diving and swimming skills in a vaudeville show in Boston. In court Kellerman countered the charge against the knit suit, sans skirt, by saying, “I can’t swim wearing more stuff than you hang on a clothesline.” The judge let the suit slide, provided she wear a skirt over it until she enter the water. It took a while, but the new skirt-less suit eventually caught on and was known as the Kellerman. 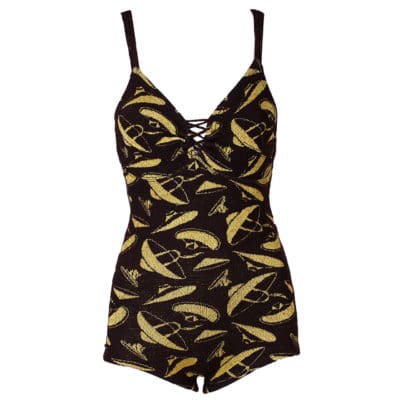 5. The Debut of the Light-Weight Jantzen Bathing Suit in the 1910s

How it impacted swimwear: Technological revolution to allow for lighter, sportier suits

Within a few short years after opening in 1910, the Portland Knitting Company becomes the leading producer of the modern bathing suit. After a one-off commission to produce a fitted, woolen knit suit for a rowing team creates wild public demand, the company changes its name to Jantzen, and the rest is history. Not only would they have the swimwear market cornered for the next few decades, but they would be instrumental in the technological developments that would lead to the light-weight, hydrodynamic and fast-drying swimsuits of the modern era.

How it impacted swimwear: Solidified swimming as a sport that included women

There’s nothing more powerful than the spoken word, evidenced by the decision to move away from the term “bathing suit” and toward the term “swimsuit”— which Jantzen officially did in 1921 — single-handedly solidifying swimming as a sport inclusive of women. Now the suit was much more than something women merely lounged around in; it was a garment loaded with the expectation that women move just as freely in the water as men. 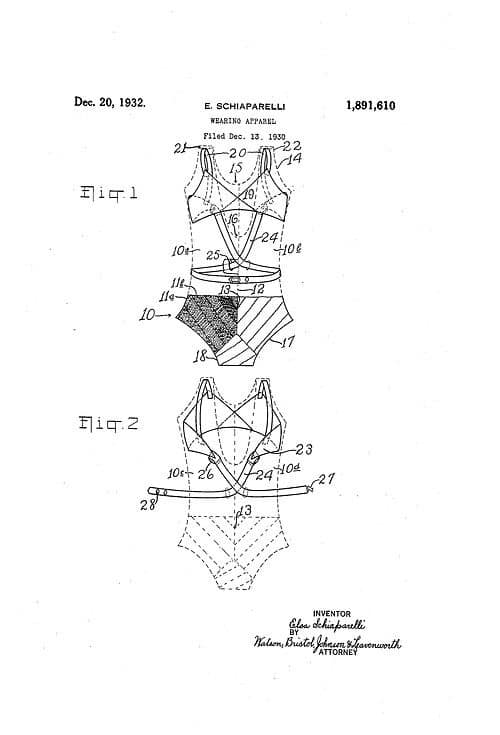 Elsa Schiaparelli’s patent application for her 1932 invention, a backless swimsuit with a built-in bra.

How it impacted swimwear: Pushed the boundaries of modesty

Ever on the forefront of women’s sportswear, Elsa Schiaparelli creates a backless swimsuit with a patented built-in brassiere in 1932 (her previous clever inventions included beach coats lined with terry cloth and bags that unfolded into blankets). A contrast to her other athletic-wear — which included ski costumes with metal zippers for freer arm movement and tennis costumes with a divided skirt — the new suit focused less on practicality and more on aesthetics, meanwhile pushing the boundaries of modesty.

How it impacted swimwear: Made the new, more revealing cuts mainstream

If fit was the focus of the 1920s, the 1930s were centered on the cut. This decade saw major advancement in design, including the adjustable strap and the halter — both surprisingly clever feats of engineering that allowed for plunging necklines and strapless tanning. The cut-out maillot, pioneered by Claire McCardell, hinted at a divide between top and bottom, but it wouldn’t be until 1936 when pinup Betty Cook would first model the full-fledged two piece in an issue of Life magazine. 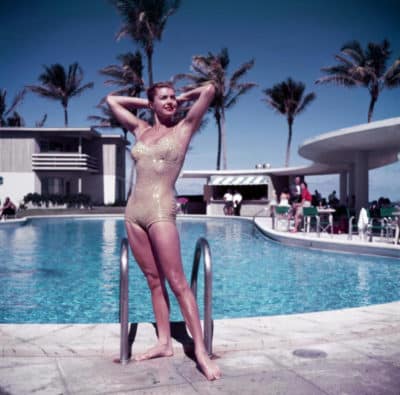 How it impacted swimwear: Made swimwear on the screen the new norm; showcased feminine athleticism.

In 1940 former U.S. Olympic team swimmer Esther Williams was scouted by Billy Rose for his Aquacade review, a Broadway-style spectacle complete with hundreds of swimmers, divers, singing and special effects. Thanks to that big break, Williams nabbed the starring role in Bathing Beauty, a wide-release, swimming-themed motion picture that earned her national fame. In the film, Williams exemplified the new breed of American woman: healthy, athletic, and proud to show off her body.

How it impacted swimwear: Most revealing cut yet

Chomping at the bit after the invention of the two-piece — which had barely gained traction with swimmers in the decade following its debut — French designer Louis Réard crafts a two-piece so revealing he names it the “bikini” after Bikini Atoll, a nuclear test site made infamous as the locale of the first case of radio fallout from a nuclear explosion. The rationale? Réarrd anticipated that it would have the same shocking impact on the public. The bikini is so scandalous, the only woman he could find to model it was an exotic dancer from a Paris Casino named Micheline Bernardini. 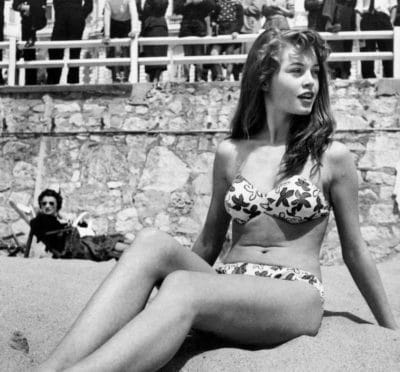 Brigitte Bardot at the beach in Cannes in 1953.

11. Brigitte Bardot photographed on beach at Cannes in 1953

How it impacted swimwear: Transformed the bikini from a social and fashion experiment to the new, must have item

She may not have been the lead of the 1953 film Un Acte d’Amour, but Brigitte Bardot was a star on the beaches of Cannes, where she was photographed alongside co-star Kirk Douglas in her itsy-bitsy bikini. The candid photos of the young actress on the brink of international stardom helped to popularize the swimwear trend that fashion magazines had mostly shunned. One telling piece from Modern Girl read, “It is hardly necessary to waste words over the so-called bikini since it is inconceivable that any girl with tact and decency would ever wear such a thing.” Turns out Modern Girl was already passé. 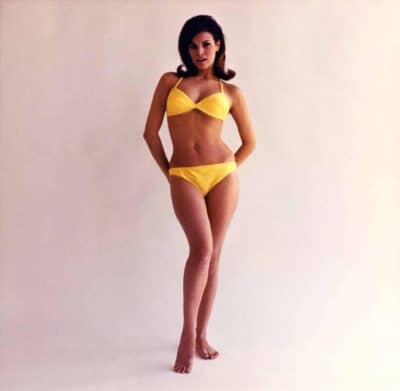 How it impacted swimwear: Prompted a sudden increase in sales of the bikini

Bardot may have made the bikini more alluring to the public, but it was actually a male teenage heartthrob that is credited for making it a commercial success. The song “Itsy Bitsy Teenie Weenie Yellow Polka Dot Bikini,” released in 1960 and performed by Brian Hyland, prompted a sudden spike in demand for the skimpy suit. 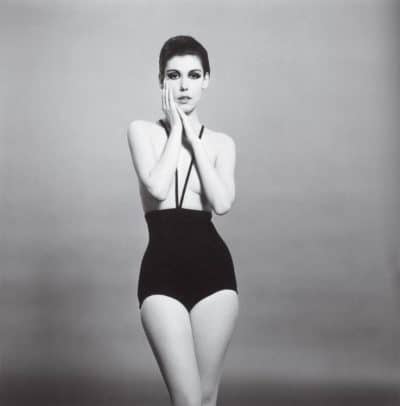 13. Rudi Gernreich launches the monokini in 1964

How it impacted swimwear: Pushed (once again) the boundaries of modesty

In 1964, Austrian-born avant-garde fashion designer Rudi Gernreich debuted the monokini, a topless, one-piece held in place with only a thin halter strap that added even more fuel to the already fire-charged sexual revolution. Originally designed to mock high fashion, the suit challenged notions of public decency and formed a scandalous stepping stone toward full-on toplessness on European beaches. There’s no evidence that the design itself ever caught on, but it certainly spawned a whole slew of variations in the form of strappy one-pieces.

How it impacted swimwear: Pushed (yet again) the boundaries of modesty

A full decade after the monokini, Gernreich “topped” his monokini by debuting a one-piece thong swimsuit. The thong was not technically a new invention, since the strappy undergarment had most likely originated in primitive cultures where variations of the loincloth were used to protect male genitalia. And in 1939, NYC mayor Fiorello LaGuardia encouraged the adoption of thongs as female garb in a decree for more modesty on nude dancers. But it was Gernreich who proudly put the thong on the map. 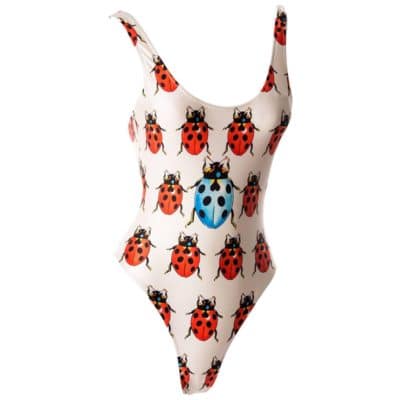 A ladybug-print swimsuit by Gianni Versace, circa 1995. Offered by Irréversible.

How it impacted swimwear: Removal of all tan lines; evidence of the importance of the tan as a cultural ideal

The past few decades saw both the shrinking of the swimsuit and the growth of sunbathing as a pastime. By the 1990s, Speedo-style swimwear made of skin-tight synthetics was ubiquitous, and a sun-bleached, bronzed look — exemplified by shows like Baywatch — emerged as the new beauty ideal. But now, thanks to textile technology, sunbathers could cultivate an all-over glow without having to bare all. Skin cancer be damned, tan-through swimwear became the new rage.

Story by Megan Cipollini. Cipollini writes about music and fashion on Imperial Mojo.