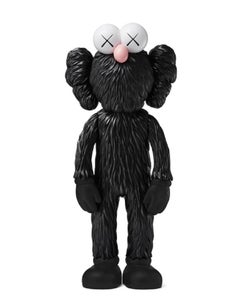 H 13 in. W 5.7 in.
KAWS BFF Blue, Best Friend Forever 2017 Figure
By KAWS
Located in Atlanta, GA
Kaws BFF, Best Friend Forever Figure from 2017. New condition still in the package. A great contemporary pop figure by the legendary KAWS. Over a year after the BFF character was re...
Category

H 13 in. W 5.7 in.
KAWS BFF, Black, 2017
By KAWS
Located in New York, NY
Over a year after the BFF character was revealed at the Central Embassy in Bangkok, Thailand, rumors started to swirl that KAWS would be releasing a 13-inch vinyl edition of the much...
Category

H 13.51 in. W 5.01 in. D 3.51 in.
KAWS - BFF - Plush Pink_limited edition
By KAWS
Located in Dallas, TX
This is a brand new piece in perfect condition. Several months after releasing the KAWS Share Figure in February, the artist released his long anticipated KAWS Take Figure. The fig...
Category

H 13 in. W 5.7 in.
BFF Plush (Edition of 3000)
By KAWS
Located in London, GB
KAWS BFF Plush. Limited edition of 3,000. Unumbered. Sold in mint condition and in the original publisher packaging, as issued.
Category

H 18.9 in. W 7.88 in. D 4.93 in.
BFF Plush Doll (Black)
By KAWS
Located in Bristol, GB
Polyester Edition of 3,000 Numbered on attached swing tag New, as issued, slight abrasion on base of box, this does not effect the figure. Some minor imperfections may exist to the ...
Category

H 19 in. W 8 in.
KAWS BFF PLUSH (Black Limited Edition)
By KAWS
Located in Englishtown, NJ
Limited edition of only 3000. Kaws signature stich stamped on bottom of foot. Comes in custom black and pink presentation box. Attached tag is numbered from edition of 3000 and reads...
Category

Kaws Bff For Sale on 1stDibs

Find the exact kaws bff you’re shopping for in the variety available on 1stDibs. You can easily find an example made in the Modern style, while we also have 8 Modern versions to choose from as well. Adding a kaws bff to a room that is mostly decorated in warm neutral tones can yield a welcome change — find a piece on 1stDibs that incorporates elements of black, blue, purple, gray and more. These artworks were handmade with extraordinary care, with artists most often working in organic material, resin and paint. A large kaws bff can be an attractive addition to some spaces, while smaller examples are available — approximately spanning 13 high and 5.01 wide — and may be better suited to a more modest living area.

How Much is a Kaws Bff?

The price for an artwork of this kind can differ depending upon size, time period and other attributes — a kaws bff in our inventory may begin at $650 and can go as high as $3,475, while the average can fetch as much as $1,025.