From graffiti tagger to hypebeast obsession to auction hero — we chart the artist’s rise and his widening influence.
by Lisa Santandrea
Pin
Share
Tweet
Email

In the late 1990s, and the artist, a 1996 graduate of New York’s School of Visual Arts, was making a living as an illustrator for the animation studio Jumbo Pictures. Like young Hansel and Gretel with their trail of crumbs, KAWS would mark the morning route to his downtown Manhattan office with “subvertising,” “interrupting” fashion advertisements by adding his colorful character Bendy, its sinuous length sliding playfully around the likes of a Calvin Klein perfume bottle or supermodel Christy Turlington.

KAWS’s résumé reads like a record of major 21st-century pop-culture moments. It includes his work with streetwear brands like A Bathing Ape and Supreme; his design for the cover of Kanye West’s 2008 album, 808s & Heartbreak; and his collaboration with designer Kim Jones on the Dior Homme Spring/Summer 2019 collection, Jones’s debut as the fashion brand’s creative director.

KAWS has developed his own pair of Nike Air Jordans, flown a 40-foot Companion balloon in the 2012 Macy’s Thanksgiving Day Parade and designed a one-time-only Moonman award for the 2013 MTV Video Music Awards.

Yet while recent exhibitions in Fort Worth and Shanghai attest to a growing appreciation in the mainstream art world, this recognition is far from universal. His work “makes the art world uncomfortable,” Anne Pasternak, director of the Brooklyn Museum, told the New York Times. Nevertheless, her institution is planning a major survey of his work, “KAWS: WHAT PARTY,” in 2021.

“KAWS is one of the few artists who straddle multigeneration and global demographics of collectors,” Anders Petterson, founder and managing director of the art market analysis firm ArtTactic, wrote in an email. “His work doesn’t solely appeal to the inner art world (although the artist has been very good at cultivating the premium end of the market). But through collaborations with luxury and fashion brands, building a large Instagram following and creating an accessible toy range, the artist has extended his fan and collector base to encompass nontraditional art buyers and fans, particularly younger buyers, many in Asia.”

One final thought: In 2019, the painting THE KAWS ALBUM (2005), a mashup of the Simpsons and the Beatles, sold at auction in Hong Kong for $14.8 million. That made it the most expensive Western artwork ever sold in Asia — until Gerhard Richter’s 1987 canvas Abstraktes Bild (649-2) brought $27.7 million in a sale streamed from Hong Kong in October 2020. KAWS vs. Richter? An interesting time for the art world, indeed. 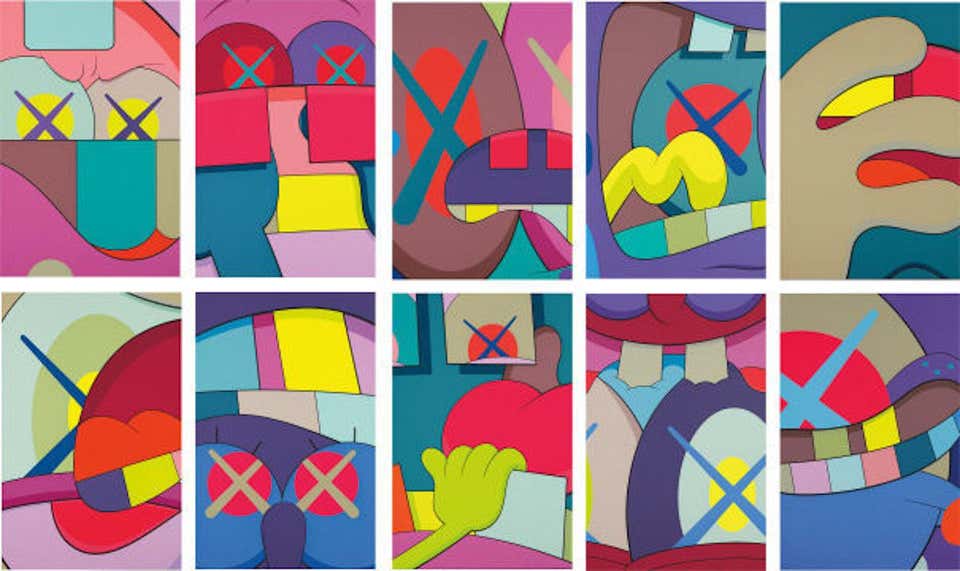