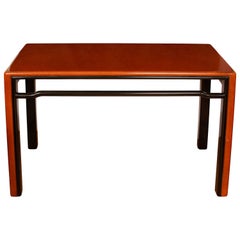 H 42 in. W 12 in. D 12 in.
Pair of Vintage Murano Two Toned Parabola Lamps
Located in Little Rock, AR
Harken back to the 1960s with this extra cool pair of parabolic lamps in plum and white. Vintage Murano lamps sandwiched between discs of Lucite - simple and fun! The lamps measur...
Category

H 29 in. W 36 in. D 60 in.
Modern Ebonized and Laquered Two-Tone Round Dining Breakfast Table
Located in Hopewell, NJ
Very cool partially ebonized wood lacquered dining or breakfast room table. The base of the table is constructed of steel with brass decoration and verdigris feet. Apron is 2 inches.
Category

H 27.5 in. W 64 in. D 19.75 in.
Two Tone Tea Cart with Leaves
Located in Houston, TX
Beautiful rolling tea cart with leaves. Cart finished in a striking ebony and walnut. Great as a side table. Table measures 32.25" wide with leaves open.
Category

H 29.5 in. Dm 6.5 in.
Tall Two Tones Metal and Brass Pair of Lamps
By Paul Evans
Located in Saint-Ouen, IDF
Pair of tall lamps made of metal and brass in the style of Paul Evans. Wide rectangle feet, square central body and completed by matching shades with metal edges.
Category

H 34.26 in. Dm 11.82 in.
A Two Tone Opaline Murano Teardrop Lamp
By Murano Glass Sommerso
Located in Little Rock, AR
Such a dramatic and elegant two tone treat made of Vintage opaline glass. Startling contrast of OCEAN BLUE and CASIS, with an elegant silhouette. The lamp is 29 inches from tabl...
Category

H 28 in. Dm 10 in.
Mid-Century Two Toned Brass Lamps by Laurel Company
By Laurel Lamp Company
Located in Houston, TX
An unusual pair of brass two toned Mid-Century lamps with polished brass and faux tortoise insets on the panels. These lamps are very architectural in style great for bedroom lamps b...
Category

H 16 in. W 7 in. D 13 in.
Get Updated with New Arrivals
Save "Mid Century Modern Two Tone Dining Table", and we’ll notify you when there are new listings in this category.

How Much is a Mid Century Modern Two Tone Dining Table?

The average selling price for a mid century modern two tone dining table at 1stDibs is $2,800, while they’re typically $650 on the low end and $12,000 for the highest priced.