Blair Hughes-Stanton was the only son of a successful landscape painter, Sir Herbert Hughes-Stanton. He had little formal education, joining a cadet school ship at the age of 13. As an artist, he trained at the Byam Shaw School of Art, where he was greatly influenced by Leon Underwood. In 1921, he moved to Underwood’s new school in Hammersmith and when Underwood went to America in 1925, Hughes-Stanton was left in charge of the school. Although he continued to paint and draw, he soon gained a reputation for his wood-engravings. Hughes-Stanton's first published works were illustrations to T.E. Lawrence’s The Seven Pillar’s of Wisdom, 1926. He married Gertrude Hermes, a well known British printmaker, in the same year. Much of Hughes-Stanton’s subsequent work was in the form of illustrations for private press books, first with the Cressent and Golden Cockerel Presses and then, from 1930–33, for the Gregynog Press in Wales. Between 1928–30, he was closely associated with D.H. Lawrence and illustrated several of his books. It was partly in response to the philosophy of these novels and partly to his new affair with Ida Graves that he created the overtly sexual iconography that marks the prints of this period. In 1933–36, he established Gemini Press, with the backing of Robert Sainsbury, but by 1935, the Depression had put an end to commissions for illustrative works, and he returned to the single sheet print. Hughes-Stanton's prints of the later 1930s are notable in their concern with modernist abstraction. He won an international prize for engraving at the Venice Biennale in 1938. During World War II, he worked in camouflage with the Royal Engineers, after which he was sent to Greece, where he was captured, became a PoW, and was shot in the face. Following the war, commissions for private press books dried up, and his war wound seriously affected his three-dimensional vision. He found work teaching at Westminster School of Art 1947–48, and from 1948 Hughes-Stanton was a lecturer in printmaking and drawing at the Society of Wood Engravers, St. Martins and the Central School of Art. He later lived in Manningtree, Essex.

Related Items
'The Magic Is Ahead' from 'Drama and Color in the America's Cup Races'
By Jacques La Grange
Located in Myrtle Beach, SC
Category 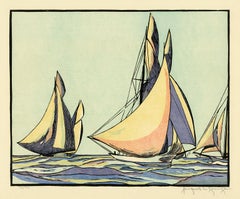 Jacques La Grange
'The Magic Is Ahead' from 'Drama and Color in the America's Cup Races', 1934 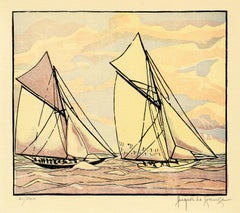