Charles Damrow, cowboy artist and painter of western cowboy and Native American subject matter, established friendships with Native Americans, cowboy artists and Native American traders of the Southwest. Damrow, born in Sheboygan, Wisconsin, in 1916, left home to venture west at the young age of 13. He was largely self-taught and enjoyed painting nostalgic scenes of the frontier. Damrow, who drifted between acclaim and obscurity, had associations and friendships with many notable Westerners, including Olaf Wieghorst, Barry Goldwater, Peter McDonald and Bill McGee. His paintings are highly collectible, held in private collections, municipal buildings, and corporate collections. Damrow has been noted in the Illustrated Biographical Directory, American Artists at Auction 1645–1945, Artists Blue Book and countless other magazines, newspaper articles and art publications. Damrow's artistic skills remained strong throughout his early career, culminating in a horse accident in 1968, confining his best work to the earlier period. His deep friendships with Native Americans and cowboys of the Southwest ended with his death in 1989, but his works will continue to surface among Native American art patrons and art galleries nationwide. 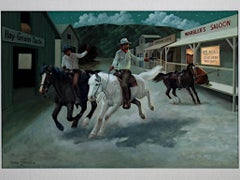 Charles Damrow
'The Noonday Rest', Wisconsin, American West Landscape, Who Was Who, Circa 1940 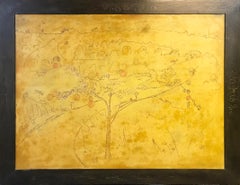