Cecil Crosley Bell was born on July 15, 1906, in Seattle. Bell studied printmaking at the Art Institute of Chicago before moving to New York to study at the Art Students League with John Sloan. Bell remained in New York, eventually settling in Staten Island with his wife. Most of his paintings depict famous locations around New York City. Bell died in New York in 1970. Largely unknown during his lifetime, in 1973 a retrospective of his work was held at The Museum of Modern Art, New York.

SELF-PORTRAIT
By Cecil Crosley Bell
Located in Portland, ME
Bell, Cecil C. SELF PORTRAIT. Drypoint with pencil highlights, 1931. 16 X 12 inches. Titled and signed in pencil, and with Bell's drystamp in the margin, lower left. In excellent con...
Category 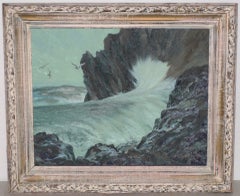 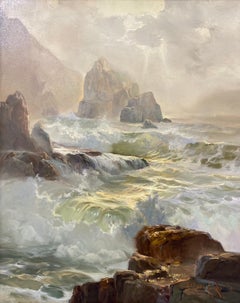 David Harris
Forest View of a Village in Normandy by David Harris (American, 20th c.), Circa 1970

Previously Available Items
"Near the Bridge (Brooklyn Bridge, NY)"
By Cecil Crosley Bell
Located in Lambertville, NJ
Cecil Bell was born in Seattle, WA in 1906, and he later moved to Staten Island, NY. It was in New York City where he found the inspiration for his work, the city and its people, foc...
Category