Charles Bunnell developed a love for art at a very young age. As a child in Kansas City, Missouri, he spent much of his time drawing. When he was unable to find paper he drew on walls and in the margins of textbooks for which he was often fined. Around 1915, Bunnell moved with his family to Colorado Springs, Colorado. He served in World War I and later used his GI Training to study at the Broadmoor Art Academy (later renamed the Colorado Springs Fine Arts Center) during 1922 and 1923.

In 1922, he married fellow student, Laura Palmer. He studied with Ernest Lawson in 1927-1928 and, in the winter of 1928-1929, he served as Lawson’s assistant. In the late 1920’s, the Bunnell’s settled just west of Colorado Springs and 1928, they welcomed the first of their three children. Their one-acre homesite, which they referred to as “Old Home Place”, was situated between two sets of railroad tracks at the foot of Pike’s Peak. Charlie converted an old railroad boxcar into his studio, where he later gave lessons.

Beginning in 1931, Bunnell spent a year and a half studying under Boardman Robinson. The two men clashed constantly due to a generation gap and markedly different philosophies. Robinson encouraged his students not to stray from realism and though Bunnell mastered Robinson’s preferred style of American Scene painting, he regularly irritated his professor with his abstract sketches.

Bunnell taught at the Kansas City Art Institute during the summers of 1929, 1930, 1940, and 1941. Between 1934 and 1941, he painted and taught under federal projects which included assisting Frank Mechau on murals for the Colorado Springs Post Office. However, he did not take to mural making and, after criticism from Boardman Robinson about his use of “heavy daubs which have no place in mural work,” he abandoned mural-making altogether.

By the late 1930’s, Bunnell’s work departed from the American Scene/Modernist style he was trained in towards abstraction. This is marked by his “Black and Blue” series, consisting of 83 abstracted ink and watercolors. Affected by the Second World War and the loss of his 10-year old son, Bunnell’s work of the early 1940’s took on a Transcendental and Surrealist tone. The works from this period are moody and readily reflect the political and personal turmoil experienced by the artist. 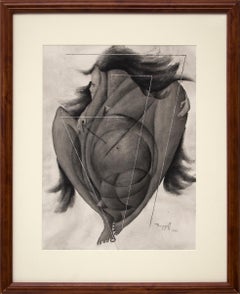 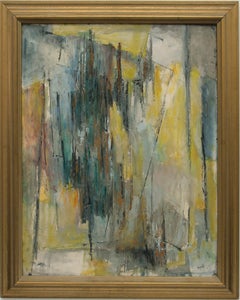 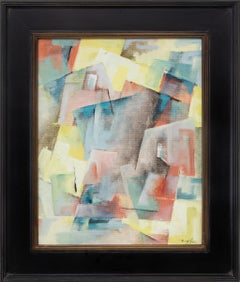 Untitled Figure on a Cross (Futurism/Cubism, Black & White Drawing)
By Charles Ragland Bunnell
Located in Denver, CO
Original drawing by Colorado artist, Charles Bunnell (1897-1968), a figure on a cross is depicted in a cubist/futurist style, rendered in graphite with white, gray and black tones. ...
Category 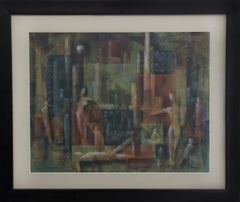