David Barnett, an artist, collector, appraiser and gallerist has been passionate about art from the early age of five. David’s career as an art dealer began at age 19 when, as a fine arts student, he sponsored an exhibition of work by fellow student artists. In 1966, he opened his first gallery in a converted basement apartment at Wisconsin Avenue and 21st Street. In 1985, David moved his gallery from Wisconsin Avenue into the Old Button Mansion on State Street and has been active ever since.

David’s talents for recognizing undervalued artists and for meeting the needs of art lovers, art collectors and artists have created a vibrant, flourishing gallery and collection of over 6,000 works of art. David was born and raised in Wisconsin. He has been painting in watercolors, acrylics and oil pastels as well as fine art photography. David has more than 10 different series he has developed over the years. They include Abstract, Surrealism, Morph Dog, Up North Birch Bark, Impressions of Mexico City, Southwest, Fireworks, Famous Artist Paying Homage and Garden Panorama. Influential artists include Vermeer, Miró, Kandinsky, Chagall, Nolde and Klee. David has been featured in many magazines, newspapers and public television programs regarding his beautiful gallery collection and knowledge and passion for fine art. David also has work in the permanent collection Scottsdale Museum of Contemporary Art, Arizona. In November 2005, he opened his second studio gallery in Hartland, Wisconsin. 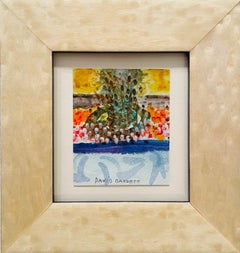 David Barnett
"Homage to David Hockney - Sun and Water Spots on My Glasses by the Pool", 2021

"Turtle," Original Surreal Pen and Ink Drawing signed by David Barnett
By David Barnett
Located in Milwaukee, WI
"Turtles" is an original ink drawing by David Barnett, signed in the lower right. This surreal image centers around a turtle with an enlarged head standing on some sort of ledge, spe...
Category

David Barnett
"Homage to Vermeer and the Girl with the Pearl Earring," signed by David Barnett, 2008

David Barnett drawings and watercolor paintings for sale on 1stDibs

1stDibs offers a wide variety of authentic David Barnett drawings and watercolor paintings for sale. If you're looking for a way to introduce a pop of color to a neutral corner of your living room or bedroom, you can find work that includes elements of blue, green and other colors. You can also browse by medium to find art by David Barnett in ink, watercolor, paint and more. Much of this artist's original work was created during the 21st Century and Contemporary, and is mostly associated with the Contemporary style. Not every interior allows for large David Barnett drawings and watercolor paintings, so small editions measuring 5.625 inches across are available. Customers who are interested in this artist might also find the work of Margot Glass, Mary Judge and Reginald K. Gee. On 1stDibs, the price for these items starts at $405 and tops out at $8,800, while the average work can sell for $2,263.