David Bumbeck's recent sculptures show appreciation for Egyptian, Greek and Renaissance imagery. Additionally, they also put a new spin on aspects of African art, Currier and Ives and a figure derived from an 18th-century Maltese painting. One need not know the specific sources of his imagery, to appreciate the artist's prolific imagination, however, one cannot fail to be impressed by his ability to translate his inspirations and enthusiasms into the assertions of an independent sensibility. Bumbeck was director of the Christian A. Johnson Memorial Gallery, from 1973–85 and has played a strategic role in the growth and development of their art collection. He has exhibited widely in the US and abroad, with solo exhibitions at Dartmouth College, the University of Northern Arizona, Flagstaff, The Mary Ryan Gallery, New York and the Everson Museum, Syracuse. His works are included in many important print collections, including those of the Brooklyn Museum of Art, the Library of Congress, the New York Public Library, the Metropolitan Museum of Art, the Carnegie Museum of Art and the Boston Public Library. Listed in Who's Who in American Art, Bumbeck was named Academician of the National Academy of Design, in 1992.

(Biography provided by Stone and Press Gallery)
Applied Filters6 results
Artist:David Bumbeck
to
1
Item Location
6
3
4
2
1
3
2
Overall Width
to
2
1
1
6
2
3
6
11,591
3,119
2,532
1,919
6
5
1
For Matisse (Henri Matisse surrounded by his imagery and iconography)
By David Bumbeck
Located in New Orleans, LA
David Bumbeck creates a portrait of Henri Matisse using that artist's imagery and iconography to frame the portrait. This impression is #25 from an edition of 65 Throughout his ca...
Category

David Bumbeck
For Matisse (Henri Matisse surrounded by his imagery and iconography), 1989

THE WINDOW II
By David Bumbeck
Located in Portland, ME
Bumbeck, David (American, born 1940). WINDOW II. Etching and aquatint, 1966. An Artist's Proof aside from the edition of 35. Ttiled, inscribed "Artist's Proof," and signed and dated,...
Category 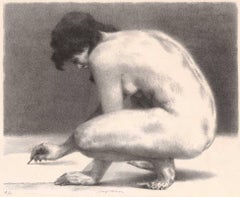 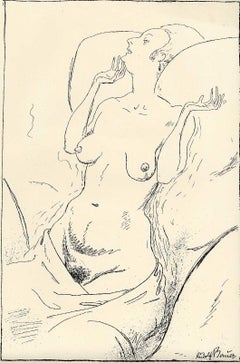 Rudolf Bauer
Seated Nude / Arms Raised (Head reclines on back of chair), circa 1915

Confident (profile of young nude girl with wisps of hair on her neck)
By Mikio Watanabe
Located in New Orleans, LA
Category

Mikio Watanabe
Confident (profile of young nude girl with wisps of hair on her neck), 2004