Harry Sternberg was an American painter, printmaker, muralist, lithographer and educator. He was born in New York City on July 19, 1904. He studied at the Art Students League of New York, graphics with Harry Wickey. During the Depression, he was a Works Progress Administration artist and his murals are in post offices in Chicago as well as Chester and Sellersville, Pennsylvania. In 1936, Sternberg was awarded a Guggenheim Fellowship for creating a series of drawings, prints and paintings showing the principal American Industrial and agricultural occupations. He confined his investigations to the coal and steel industries of eastern Pennsylvania, immersing himself for several months in the lives of the coal miners in Mahanoy City. When he returned to New York, he made a series of 11 prints that emphasized the bleak lives and dangerous work of the miners. Sternberg wished to point out the dangers of working in the mines, the diseases caused by the inhalation of coal dust, mine collapses and maiming dynamite accidents that would result in such mutilations. From 1934–68, he taught painting and graphics at the Art Students League of New York, from 1942–45, graphics at the New School for Social Research and 1959–69, he was the head of the Art Department in the Idyllwild School of Music and Art at the University of Southern California. He wrote several books on graphics including silk screening, etching and woodcutting. Sternberg died on November 27, 2001, in Escondido, California.

Modernist Rabbi Judaica Painting on Gold Background
By Harry Sternberg
Located in Surfside, FL
A contorted Rabbi looking upward is depicted in a naive, and almost child-like manner. Vibrant colors, and gestural brushstrokes fill the composition, enhancing the flatness of the f...
Category 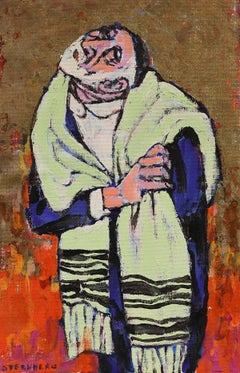 “The King”
By Harry Sternberg
Located in Southampton, NY
Original 1965 oil on masonite painting of a king on his throne with embellishments of gold and silver leaf by the well known American artist, Harry Sternberg. Signed lower right. Ci...
Category

“The Queen”
By Harry Sternberg
Located in Southampton, NY
Original 1965 oil on masonite painting of a queen on her throne with embellishments of gold and silver leaf by the well known American artist, Harry Sternberg. Signed lower left. Ci...
Category

Modernist Rabbi In Synagogue Judaica Watercolor Harry Sternberg
By Harry Sternberg
Located in Surfside, FL
Harry Sternberg, artist, teacher, and political activist was born in New York City's lower east side in 1904. He was the youngest of eight children born to his mother, a hungarian im...
Category

H 8.97 in. W 9.25 in.
Mother and Child
By Max Weber
Located in Fairlawn, OH
From: Woodcuts and Linoleum Blocks by Max Weber (32 plates) Unsigned individual print(s), The book signed in ink on the limitation page (a photocopy included with purchase) Publishe...
Category

Harry Sternberg
Painting the Mountains, from My Life in Woodcuts, 1991, 1991

Find wide variety of authentic Harry Sternberg art available for sale on 1stDibs. You can also browse art by medium to find Harry Sternberg in acrylic paint, aquatint, paint, and more. Much of the original work by this artist or collective was created during the 20th Century and is mostly associated with the Modern style. Not every interior allows for large Harry Sternberg art, so small editions measuring 8 inches across are available. Customers who are interested in this artist might also find the work of Alfred Bendiner, Frank Kleinholz and Charles Banks Wilson. On 1stDibs, the price for these items starts at $850 and tops out at $39,000, while the average work can sell for $1,200. ..