Over the course of a prolific career that has spanned more than 30 years, artist Jimmy Nelson has captured profound and enduring images of the world’s most remote tribes and indigenous peoples. His rich color photography, portraits and landscapes seek to tell the stories of many diverse cultures and explore the impact of the modern age on their traditions and life.

Nelson was born in 1967 in Sevenoaks, Kent, and spent his early childhood traveling the world with his father, a geologist. At the age of seven, Nelson was sent to a Jesuit boarding school in the North of England, where he spent the next ten years of his life.

Nelson journeyed to Tibet in his late teens — he had lost all of his hair owing to an autoimmune disorder and thought that the Tibetan monks might be more accepting of his appearance than his affluent British classmates were. The year-long trip afforded him the opportunity to photograph the East Asian region, which had only recently opened its borders to foreigners. In 1988, Nelson’s images were published in several worldwide publications, garnering international acclaim. He secured assignments to cover a range of world events as a photojournalist — among them, Russia’s involvement with Afghanistan and the war in former Yugoslavia.

In 1994, Nelson and his wife, Ashkaine, embarked on an ambitious project titled “Literary Portraits of China,” which captured images of what were then the country’s lesser seen corners. It took 40 months to complete, and his photos were later exhibited at the People’s Palace in Tiananmen Square, Beijing.

Later, Nelson traveled the globe to not only document indigenous cultures through his figurative photography but to discover how they were surviving in the contemporary world. This project resulted in his first book, Before They Pass Away. It was published in 2013 and an expanded edition debuted in 2020. The Jimmy Nelson Foundation was established in 2016 in order to raise awareness about the subjects of Nelson’s photography. Homage to Humanity, which features hundreds of photos of indigenous people all over the world, was published in 2018. 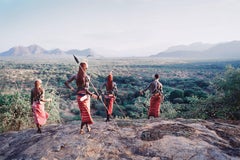 XXXVIII 4 // XXXVIII Siberia, Dolgan
By Jimmy Nelson
Located in Greenwich, CT
XXXVIII 4, Dolgans, Anabar district, Yakutia, Siberia 2018 The Dolgan people live at what feels like the end of the world, on icy white plains that stretch out as far as the eye can...
Category

XXXVII 85 // XXXVII 2 Mexico
By Jimmy Nelson
Located in Greenwich, CT
XXXVII 85, Dia de los Muertos, Oaxaca, Mexico 2017 The Zapotecs were once one of the most important civilizations in the region. Today around a million people belong to this cultura...
Category

IX 125 // IX Maori, New Zealand
By Jimmy Nelson
Located in Greenwich, CT
"IX 125 - Gisborne Festival, North Island - New Zealand, 2011 The long and intriguing story of the origins of the indigenous Maori people can be traced back to the 13th century, the...
Category

XXI 478 // XXI Vanuatu
By Jimmy Nelson
Located in Greenwich, CT
"XXI 478 - Ni Yakal Villagers, Yakel, Tanna Island - Vanuatu Islands, 2014 Settlement on the 85 Vanuatu islands dates back to around 500 BC. There is evidence that Melanesian naviga...
Category

XXII 467 // XXII China Comorants
By Jimmy Nelson
Located in Greenwich, CT
"XXII467 Yangshuo Cormorants Yangshuo County is a county under the jurisdiction of Guilin City, in the northeast of Guangxi, China. Its seat is located in Yangshuo Town. Surrounded ...
Category

IX 128 // IX Maori, New Zealand
By Jimmy Nelson
Located in Greenwich, CT
"IX 128 - Gisborne Festival, North Island - New Zealand, 2011 The long and intriguing story of the origins of the indigenous Maori people can be traced back to the 13th century, the...
Category

XXXI 32, XXXI Muchimba, Angola
By Jimmy Nelson
Located in Greenwich, CT
"The Muchimba people are a semi-nomadic people living mainly in Angola’s border area with Namibia, on the dry Kaokoveld Plateau in the Cunene region. The Cunene river is an importa...
Category

XXVIII 14 // XXVIII Wodaabe, Chad
By Jimmy Nelson
Located in Greenwich, CT
"XXVIII_14 Wodaabe Chad The nomadic Wodaabe community belong to the Fulani ethnic group, who are distributed across at least ten North-African countries. Chad is home to many of the...
Category

1stDibs offers a wide variety of authentic Jimmy Nelson photography for sale. You can find work that includes elements of orange and other colors if you are browsing the collection of photography to introduce a pop of color in a neutral corner of your living room or bedroom. You can also browse by medium to find art by Jimmy Nelson in photographic paper, pigment print and more. Much of this artist's original work was created during the 21st Century and Contemporary, and is mostly associated with the Contemporary style. Not every interior allows for large Jimmy Nelson photography, so small editions measuring 0.4000000059604645 inches across are available. Customers interested in this artist might also find the work of Steve McCurry, Drew Doggett and Mick Rock. On 1stDibs, the price for these items starts at $13,815 and tops out at $13,815 while the average work can sell for $13,815.