Lucien Abrams is an important figure in the Lyme Art Colony and the evolution of American Impressionism in the 20th century. His work represents an attempt to maintain the vitality of such a key modern movement. Lucien Abrams: A Cosmopolitan in Connecticut will give viewers a newfound perspective on this well-educated, well-traveled man of art. Abrams' exhibition record is impressive, yet his work is not widely known due to the small number of his paintings in public collections. Abrams moved to Dallas with his family in 1873. Abrams studied at Princeton, the Art Students League of New York and the Académie Julian in Paris Living and traveling in Europe and Algeria from 1894–1914. While Abrams' style is diverse, the works he exhibited annually in Paris, the Art Institute of Chicago, the Pennsylvania Academy of the Fine Arts and the National Academy of Design showed the influences of Impressionism, Post-Impressionism and Fauvism.

An admirer of Pierre-Auguste Renoir, Abrams pays homage to the Impressionist master in his painting. Abrams' many paintings of his wife and/or daughter seated in chairs invite comparison to Paul Cézanne's portraits of Madame Cézanne. The loose handling of Femme au Chapeau and its muted color scheme echoes this artist's Post-Impressionist works. North Africa was a magnet for European artists during the 19th century. Like his French colleagues, Abrams gravitated to Algeria, where he made numerous paintings of the country's architecture and people during a two-year stay in 1905–06. Abrams began dividing his time between his family home in Dallas, a winter home in San Antonio and a summer home in Old Lyme, Connecticut. Abrams brought to the American Impressionism practiced in colonies such as the one in Old Lyme a greater awareness of succeeding European artistic movements, enlivening the aesthetic approach in a way that facilitated the embrace of a more modern sensibility by members of the colony. While living in White House, Abrams' home on Johnnycake Hill, he and his wife became active in the Lyme Art Association, where Abrams exhibited both earlier European works and canvases completed in Old Lyme. The exhibition sheds light on Abrams' life, travel and impact on the practice of American Impressionism. His thorough familiarity with European art and a life distinguished him from other Lyme Colony members whose European experiences were confined to a brief period of their lives. Abrams' cosmopolitan outlook and aesthetic allowed him to infuse an updated appreciation for the modern into Impressionism in Old Lyme. As such, his presence stimulated the colony until he died in 1941.

Lucien Abrams
"In the Market Place" Algiers, Circa 1880 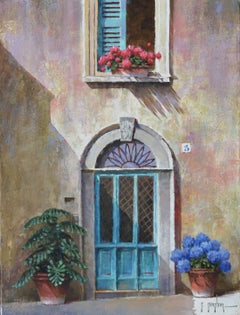 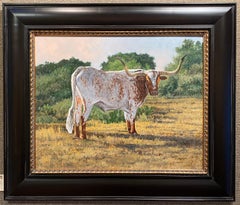