Rick Bartow was an American artist, sculptor and painter, born in Newport, Oregon, on December 16, 1946. His father's family was of Wiyot heritage. In Oregon, the family developed close ties with the local Siletz Indian community. When Bartow was five, his father died. His non-Indian mother then married Andrew Mekemson, whom Bartow considered to be a beloved second father. He became interested in art at an early age, encouraged by his aunt Amy Bartow, who was studying art and art education at the University of Washington. His love for art continued through high school and extended to music when he took up the guitar and bongos. Bartow attended Western Oregon University and graduated in 1969 with a degree in secondary art education. In 1969, he was drafted into the army and sent to Vietnam. He served in the Vietnam war from 1969–71 as a teletype operator and as a musician in a military hospital, for which he was awarded the Bronze Star. He primarily created pastel, graphite and mixed media drawings, wood sculptures, acrylic paintings, drypoint etchings, monotypes and a small number of ceramic works. Bartow died on April 2, 2016, at the age of 69, of congestive heart failure. 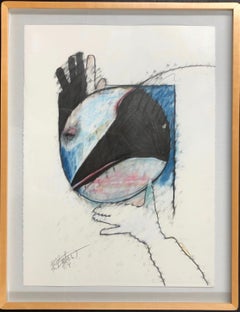 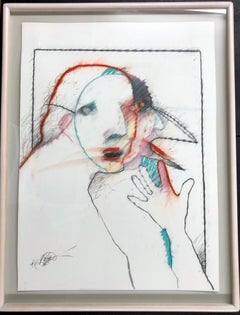 She Has a Bird Singing Inside, unique, work on paper, bird, bear, maps, blue
By Melanie Yazzie
Located in Santa Fe, NM
Category

Melanie Yazzie
She Has a Bird Singing Inside, unique, work on paper, bird, bear, maps, blue