Yosl Bergner was an Israeli painter who was born in Vienna in 1920 and grew up in Warsaw. With rampant anti-Semitism in Europe, the Freeland League for Jewish Territorial Colonization was formed in July 1935 to search for a potential Jewish homeland. Soon afterwards a pastoral firm offered the League about 16,500 square kilometers in the Kimberleys, stretching from the north of Western Australia into the Northern Territory. As history showed, the plans went nowhere. But for a time, the Australian idea was at least worth considering. Bergner's father, Melech Ravitch, became involved in a serious investigation of the Kimberleys. Thus the Bergner family moved to Australia.

Yosl emigrated to Australia in 1937 and studied in the National Gallery School until the outbreak of War World II. He served for four and a half years in the Australian Army, and later continued his studies at the Art School.

In Melbourne from 1937-48, Bergner befriended many of the local artists who now epitomize modern Australian art: Sidney Nolan, Albert Tucker, John Perceval and Arthur Boyd. Adrian Lawlor moved with his wife to a cottage at Warrandyte where they lived for 30 years.

Bergner was a frequent visitor at this Warrandyte home. All the men socialized together. Bergner encouraged them to go beyond their traditional landscape style, and he introduced a more radical concern for working families, thus having an important impact on Australian art.

Bergner may not have been prepared for the plight of many struggling Australians. Yet he felt a strong connection between the suffering of people everywhere, whether they were the Jews that he remembered from Europe, landless blacks in the heart of Australia or hungry children in inner urban Melbourne.
He left Australia in 1948 and after two years of traveling and exhibiting in Paris, Montreal and New York, he settled in Israel. He lived in Safed until moving to Tel Aviv in 1957.

Bergner has designed scenery and costumes for the Yiddish and Hebrew Theatres, particularly for the plays of Nissim Aloni, and has illustrated many books. The acme of Bergner's paintings is his allegorical works; he uses kitchen tools such as squashed pots, oil lamps, wrecks and cracked jugs, and he anthropomorphizes them. These old instruments symbolize distorted and poor world of wars, secrets and darkness. 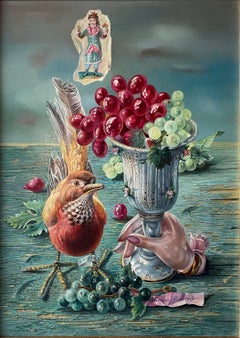 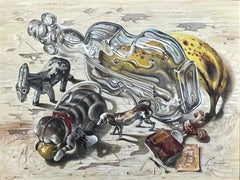