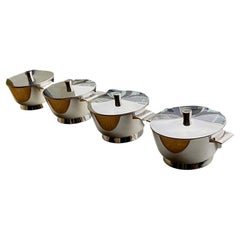 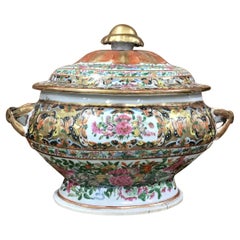 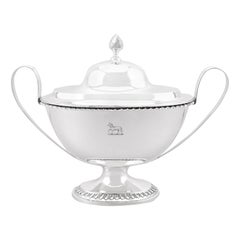 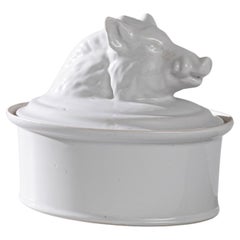 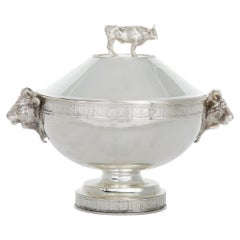 1970s Italian Ceramic Pig Tureen
Located in New York, NY
A lovely decorative Italian hand painted ceramic pig tureen made in the town of Este in the province of Padova. Circa 1970. Hand painted with a design of grape bunches and grape leav...
Category

French Country Majolica Turkey Tureen, circa 1950
By Geo
Located in The Hills, TX
Vintage Majolica turkey tureen marked "Geo" and "Made in Portugal," circa 1950.
Category

Vintage Toyo Porcelain Soup Tureen in Shape of a Goose

Vintage French Decorative Earthenware Pot by Jean Derval 'circa 1960s'
By Jean Derval
Located in London, GB
Mid-century French decorative earthenware pot with lid by Jean Derval (circa 1960s). A conical tajine form is seated on its pedestal decorated with a frieze of stylised plants. There...
Category

Rare Early 19th Century French Silver Plate Lidded Tureen, France, Circa 1830
Located in Ottawa, Ontario
Both the base & lid are engraved with a finely detailed heraldic coat of arms surmounted by a Marquess coronet, the interior retaining it's original and rarely found removable liner....
Category

Austrian Continental Silver Tureen Covered Dish with Matching Tray Jugendstil
Located in New York, NY
Continental 0.800 silver Austrian tureen with a matching under tray in Jugendstil style, insert in center of tray to fit the tureen. Designed with leaves around the boarder of tray a...
Category

Delft, Blue and White Chinoiserie Tureen, circa 1750
By Dutch Originals
Located in Verviers, BE
The blue and white oval-shaped tureen has a curved body on a spreading foot and two blue-colored foliate loop handles. The knob on the cover is modelled as a flower with four leaves....
Category

Vintage Service Oil and Vinegar by Gio Ponti
By Gio Ponti
Located in Milano, IT
Beautiful glass oil and vinegar service designed by Gio Ponti in the 1950s, Italian made. The set is made entirely of glass and the supporting base is metal. The bottles have a sinu...
Category

Wedgwood Pearlware Blue and White Covered Tureen and Stand, circa 1830

20th Century Italian Silver Soup Tureen Empire Style by Vittorio Manzoni, Milan
Located in VALENZA, IT
Gorgeous solid silver tureen in Empire style on feet with handles. The body of the tureen is completely hammered by hand, embossed and chiseled with the typical designs of the Empir...
Category

When you’ve spent hours working on a soup or stew in the kitchen, it deserves nothing less than to be served in an antique or vintage soup tureen.

A large tureen is traditionally used to serve soup or chowder, while smaller tureens can be used to serve sauces. This serving dish is going to be an alluring and practical addition to your collection of serveware. Rather than serving from the hot pot directly from your stovetop, why not elevate the presentation with a tureen on the dinner table?

The word “tureen” comes from the Latin word “terra,” which means earth. This is because potters created the first tureens from ceramics and earthenware. Today, an antique ceramic tureen is going to bring a pop of color to your dining room, as you’ll find that ceramicists traditionally hand-painted their tureens, adorning the sides and lids with natural-world motifs and other decorative embellishments.

Silver tureens, on the other hand, are timelessly understated and will pair with all of your other serving bowls and tableware. We associate certain authentic period furniture with extravagance, and 18th-century serveware, such as Georgian tureens, will likely feature lobing and gadrooning around the body and rim. (Dinner was a big deal during the Georgian era.)

Setting the table should be as important as the meal itself. On 1stDibs, an extensive collection of sophisticated antique and vintage tureens features Victorian tureens, mid-century modern tureens, porcelain tureens and more.