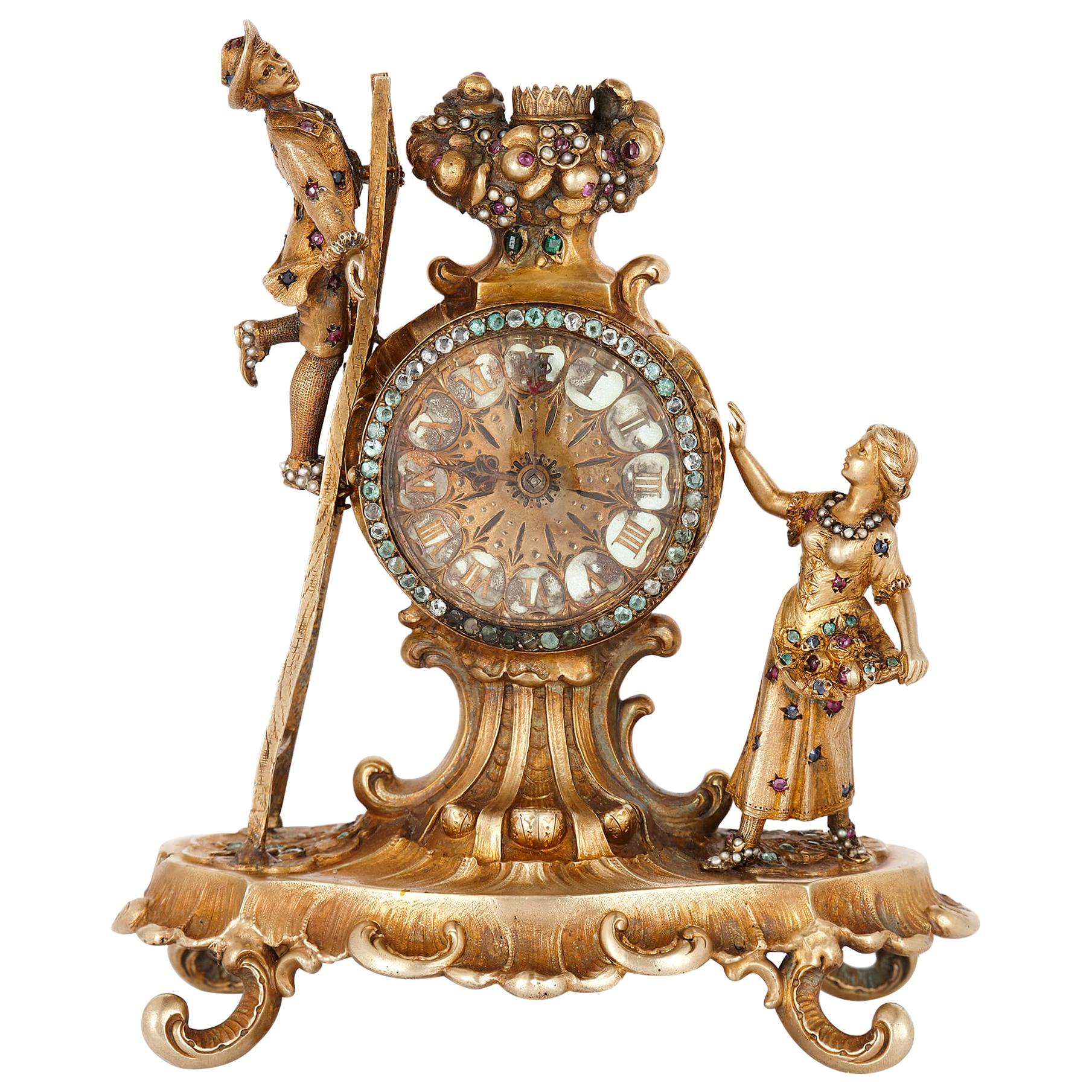 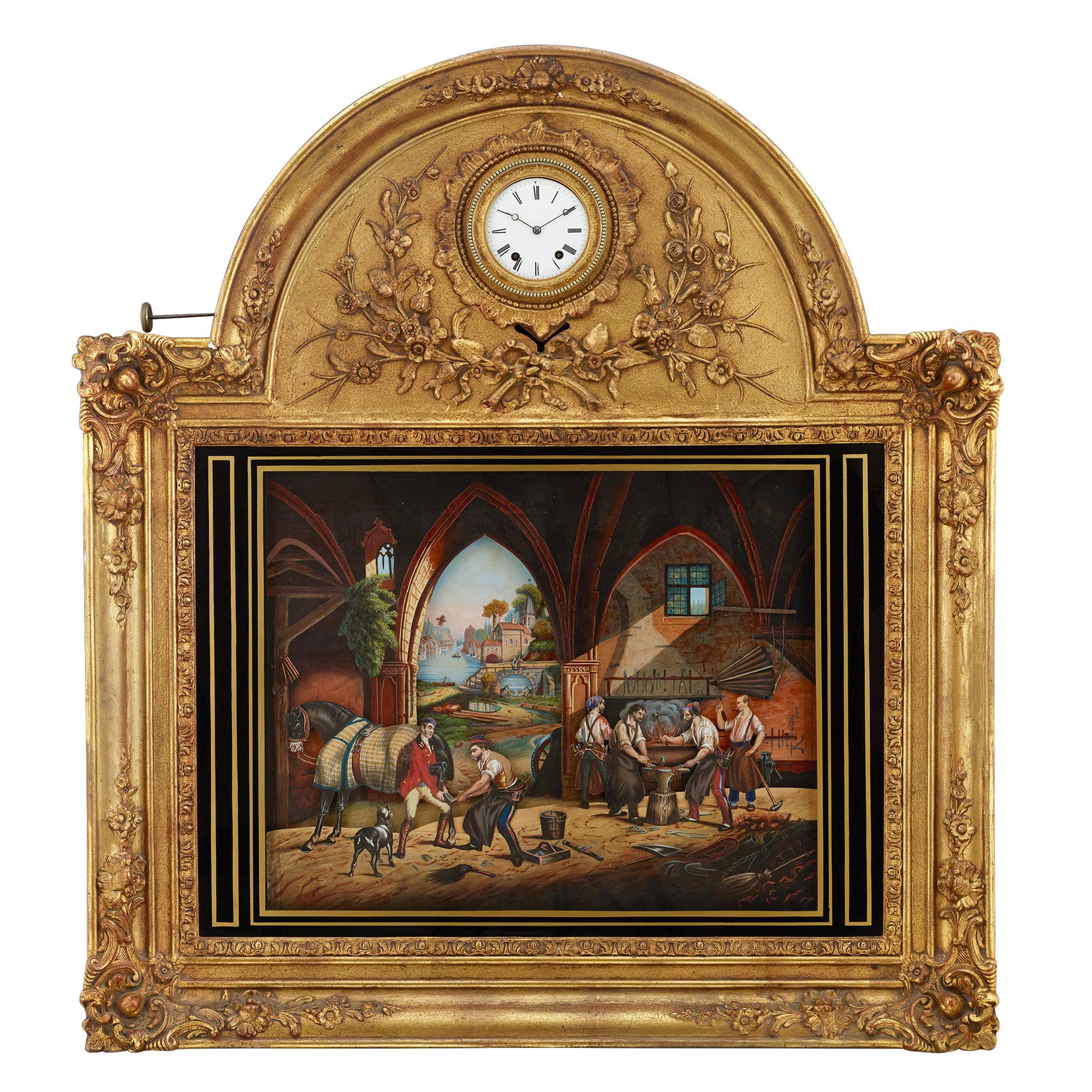 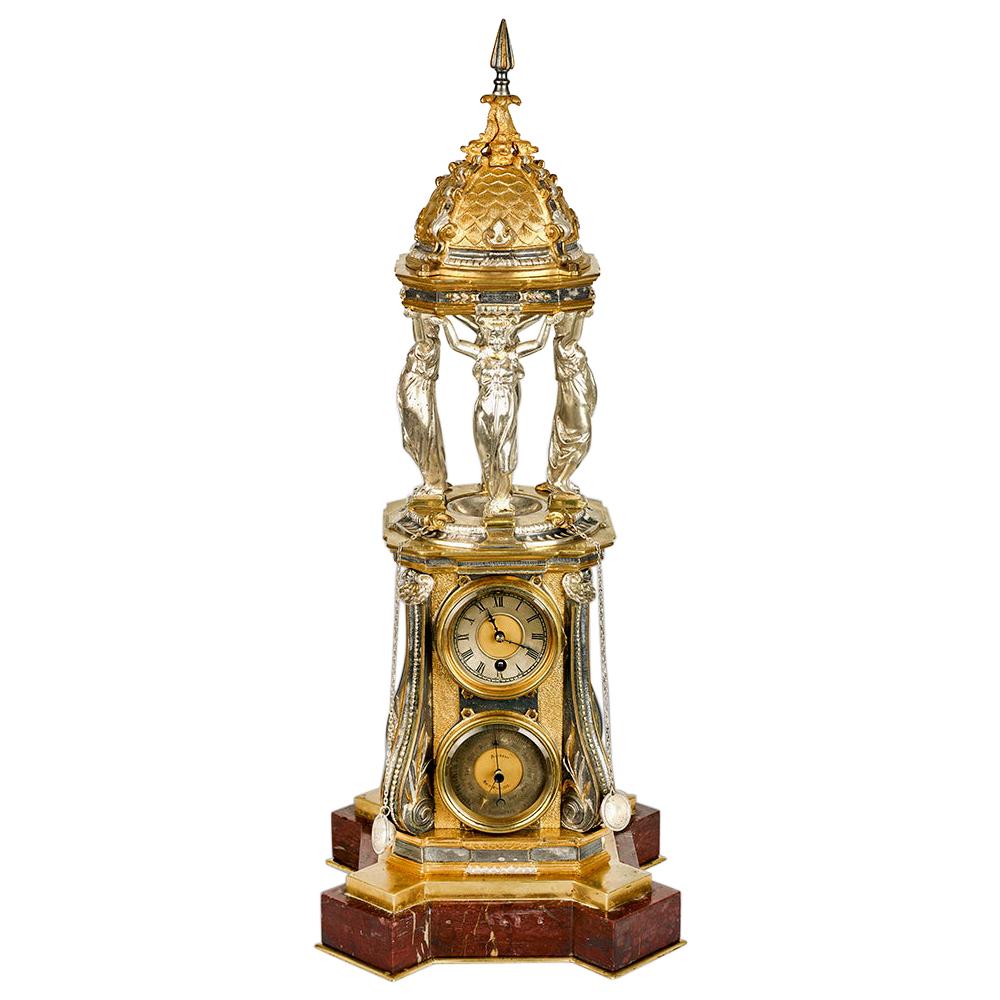 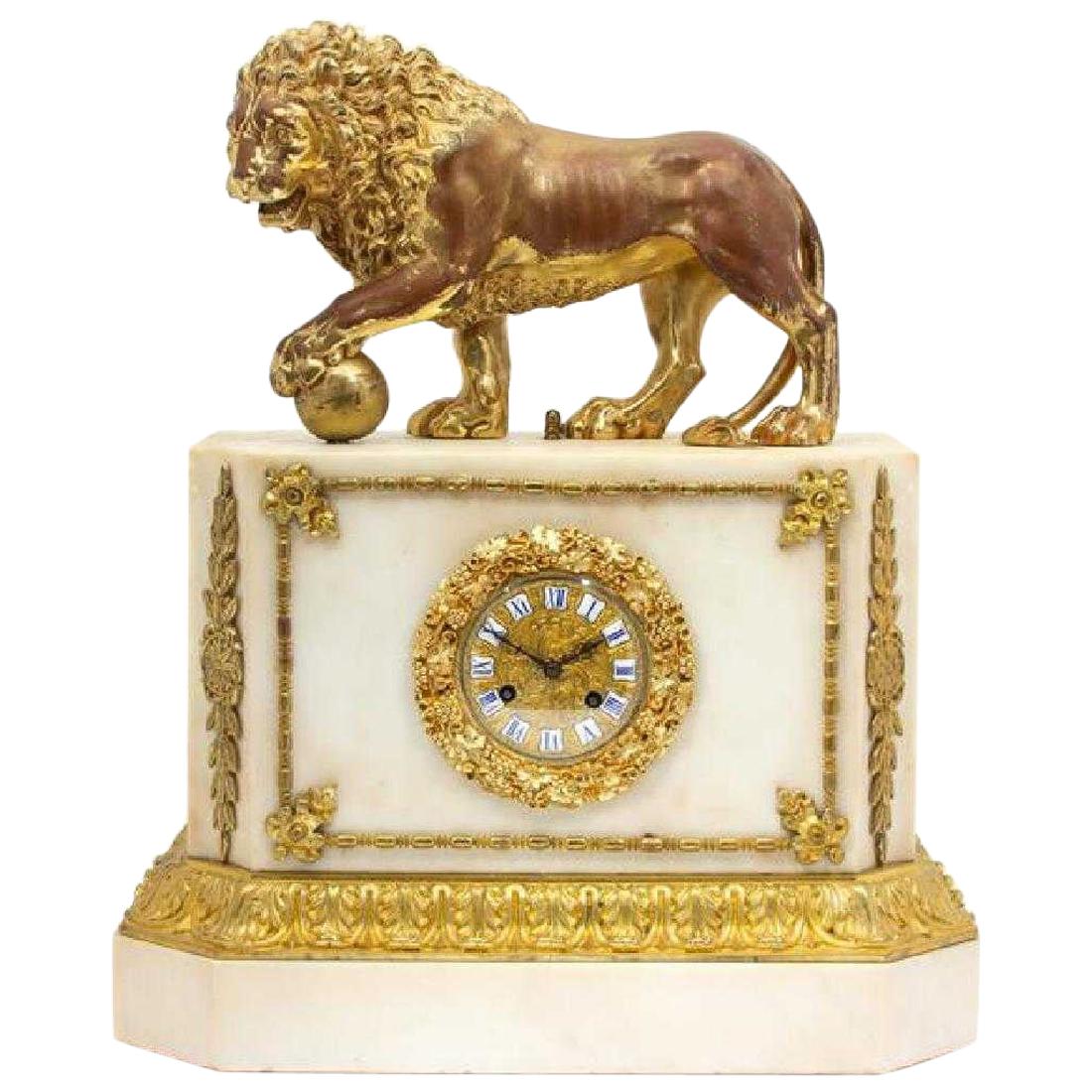 Unique and magnificent jewel encrusted automaton watch by Audemars Piguet Swiss, 2002 Measures: Height 8.5cm, width 6cm, depth 2cm This spectacular watch is by Audemars Piguet. The piece was commissioned from and created by Audemars Piguet during the first years of the new century and was sold in 2002 for 970,000 Swiss Francs. It is materially superb: crafted from 18-karat white cold and inset with approximately 1,600 diamonds and sapphires, with almost 38 carats of diamonds and nearly 60 carats of sapphires. The white gold outer case of the watch is designed about the scheme of day and night. The front cover features a sun, cloud, and sky, crafted from yellow sapphires, diamonds, and blue sapphires, respectively. The reverse, in contrast, is adorned with a crescent moon, crafted from diamonds, and set within a composition of blue sapphire sky and white clouds. The inner case, meanwhile, is adorned to the front with a mother of pearl clock dial, which is encompassed by a border wrought to resemble floral petals—the petals crafted from sapphires and mother of pearl. The reverse of the inner case is utterly unique: a bat silhouette automaton is set above a full moon of diamonds against a lapis lazuli sky. The symbol is instantly recognisable as that of Batman. The bat automaton can be activated by a slide on the side of the case. The dial of the watch is signed ‘Audemars Piguet,’ the case is numbered ‘D 94947’, and the movement is numbered ‘366996’. The movement, like the case, is unique. 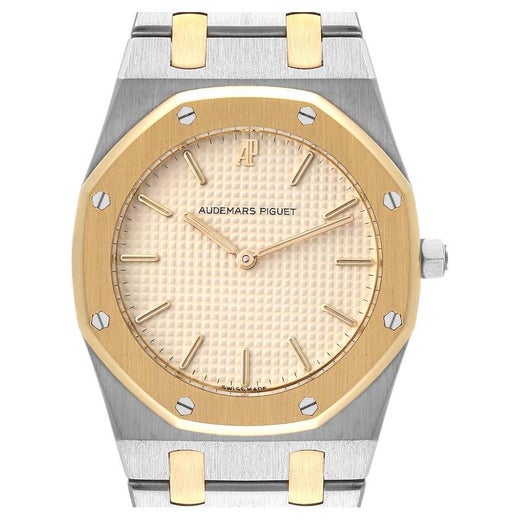 The Vallée de Joux has been a haven of watchmaking since the late 18th century, when the residents of farming communities began creating timepieces during the winter months.

Jules Louis Audemars (1851–1918) and Edward Auguste Piguet (1853–1919), both natives of the region, were already deeply entrenched in the world of watchmaking when they joined forces to form a new house of horology near the end of the 19th century, an alliance that would be the start of a multigenerational family company. With complementary specialties within the field, Audemars and Piguet made the perfect pair in 1875: Audemars, the more technically minded of the two, oversaw production, while Piguet specialized in quality control and led the business and marketing parts of the outfit.

Audemars Piguet’s first major milestone came in 1892, when it created the world’s first minute-repeating movement for a wristwatch. (It was sold to Omega, whose origins date to 1848.) That was soon followed in 1899 with the Universelle pocket watch, a masterpiece of horology that boasted a perpetual calendar, minute repeater, alarm and chronograph with jumping seconds. It is still said to be the most complicated timepiece that Audemars Piguet has ever designed.

Between 1918 and 1919, both founders of Audemars Piguet had died and were replaced by their respective sons, incidentally both named Paul. Under the leadership of ​​Paul Louis Audemars and Paul Edward Piguet, the watchmaker continued to innovate. It retained an ever-evolving technical focus and found new praise for its efforts, producing the world’s thinnest pocket-watch caliber in 1925, the first skeletonized pocket watch in 1934 and the world’s thinnest wristwatch in 1946.

When the quartz crisis of the 1970s left many watchmakers in the lurch, Audemars and Piguet found a creative solution, tapping the Geneva-born Gérald Genta to conceive the first-ever luxury watch in stainless steel. Launched at what would become the Baselworld watch and jewelry fair in 1972, the Royal Oak, with its octagonal face and integrated bracelet, would come to define the look of Audemars Piguet and revolutionize the luxury wristwatch industry, setting a standard that continues to this day.

Find a collection of vintage Audemars Piguet wristwatches and pocket watches on 1stDibs.

1stDibs Buyer Protection Guaranteed
If your item arrives not as described, we’ll work with you and the seller to make it right. Learn More
About the Seller
5.0
Located in London, United Kingdom
Recognized Seller
These prestigious sellers are industry leaders and represent the highest echelon for item quality and design.
Gold Seller
These expertly vetted sellers are highly rated and consistently exceed customer expectations.
Established in 1975
1stDibs seller since 2012
302 sales on 1stDibs
Typical response time: 5 hours
Associations
The British Antique Dealers' AssociationInternational Confederation of Art and Antique Dealers' Associations
More From This SellerView All
People Also Browsed
You May Also Like 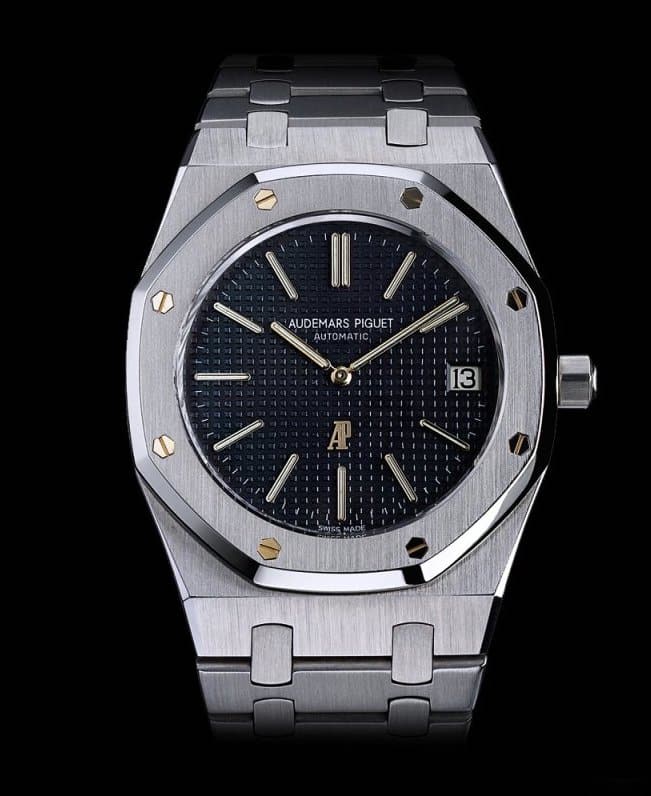