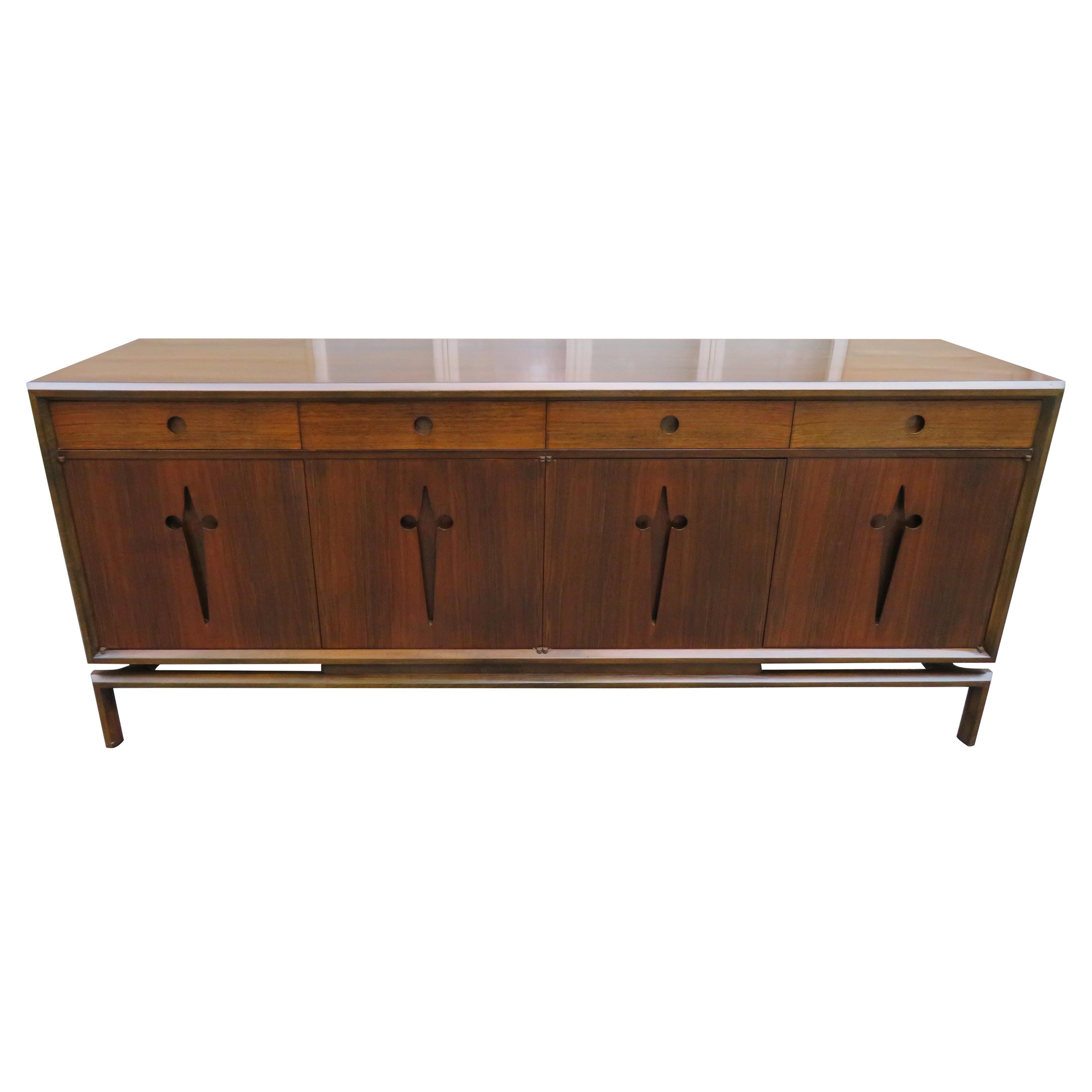 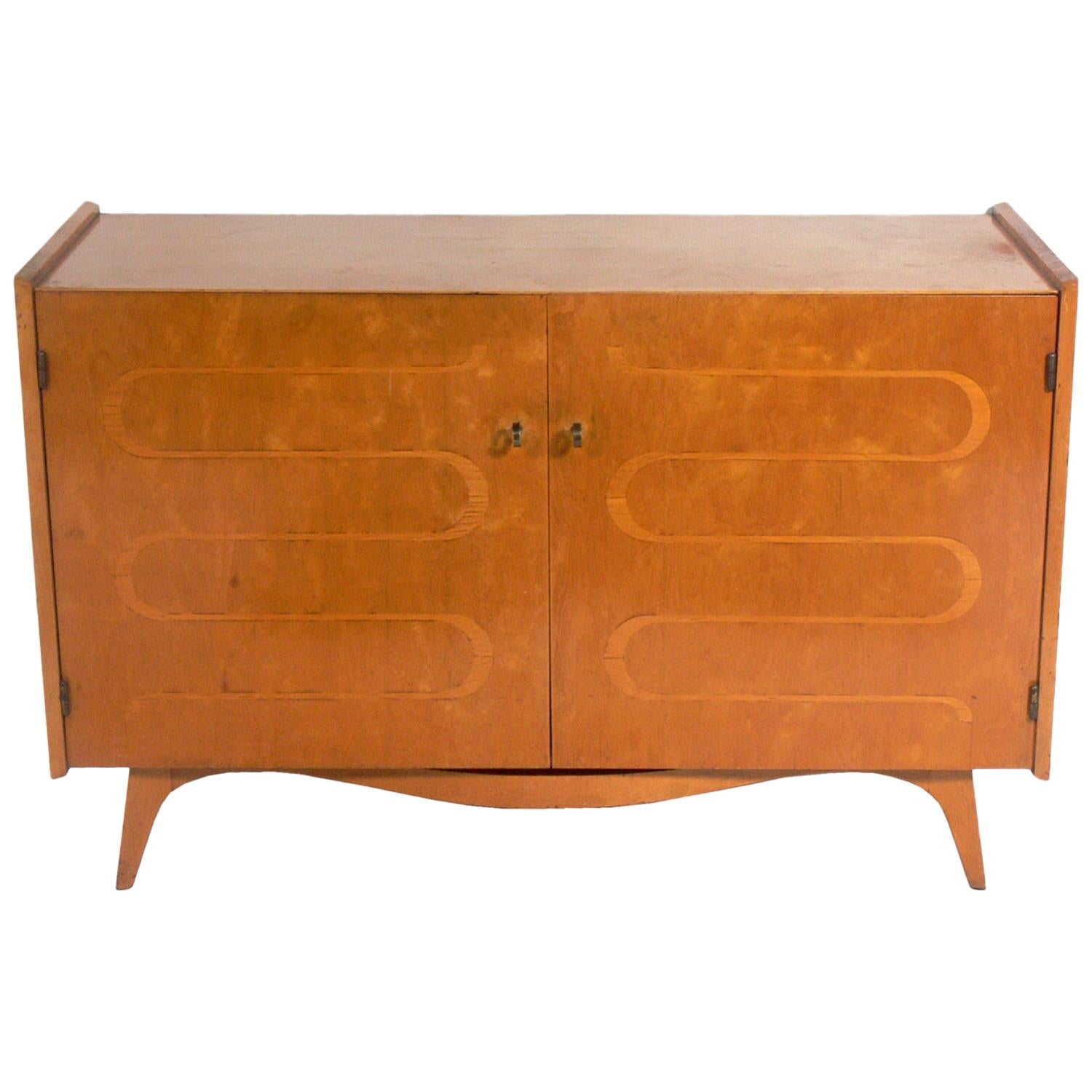 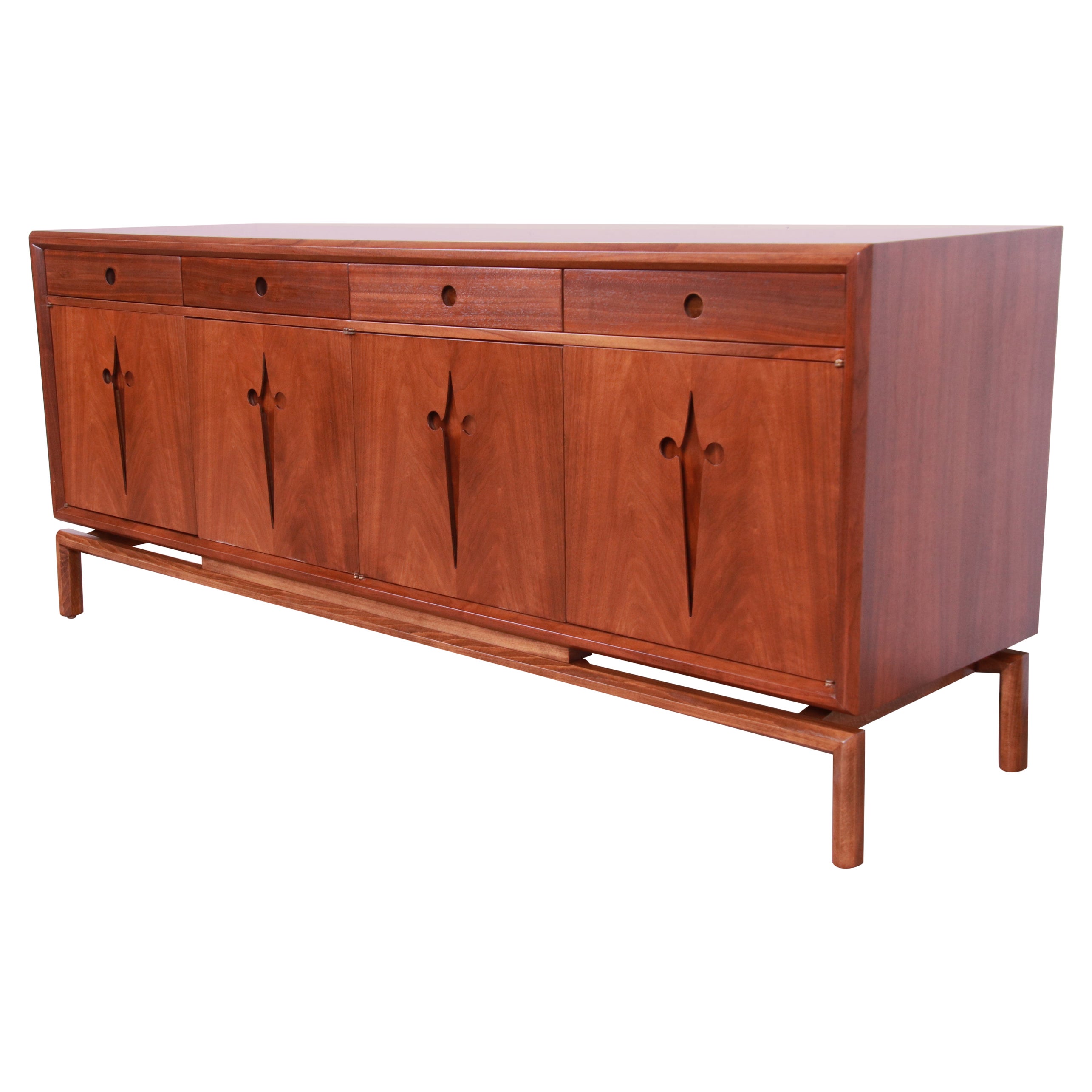 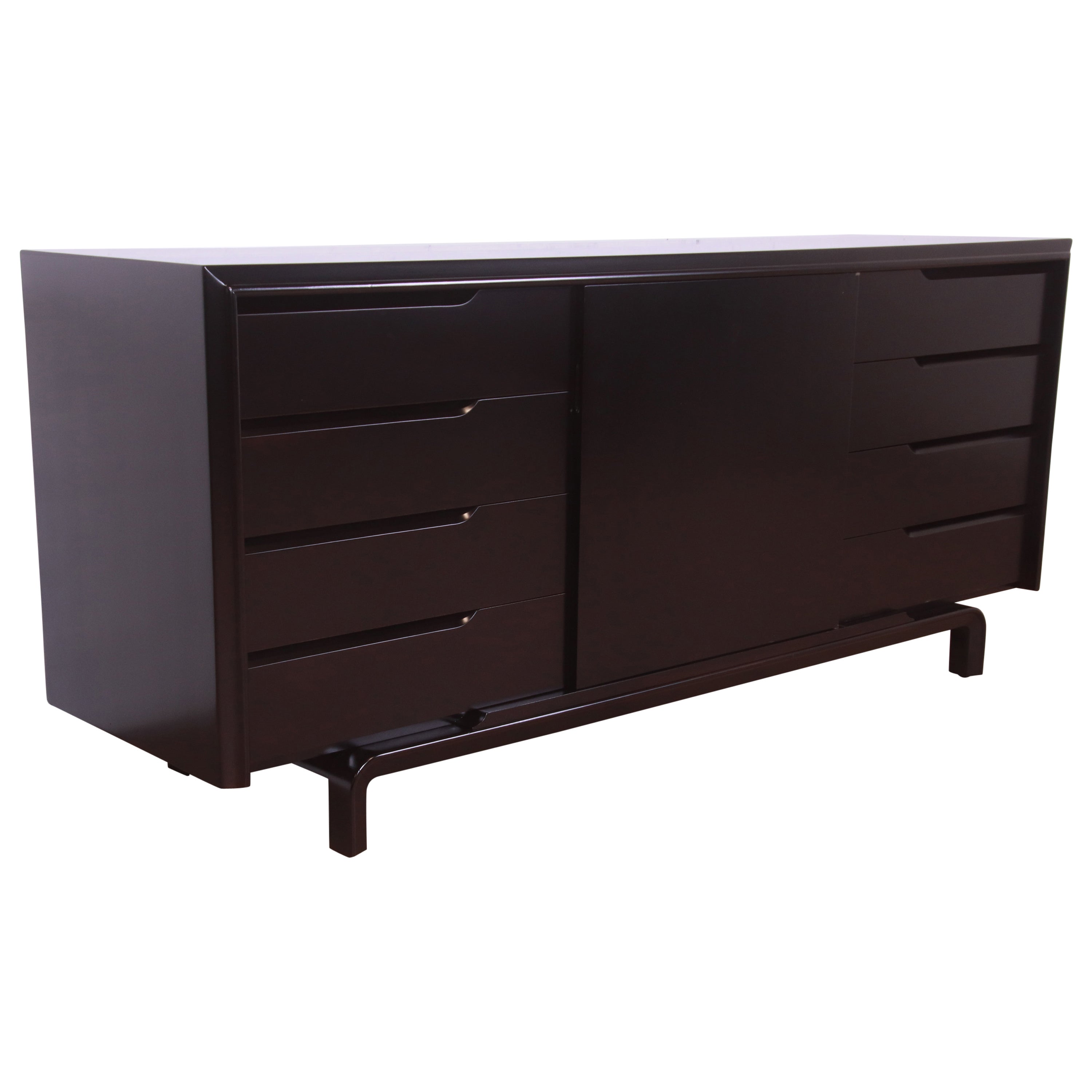 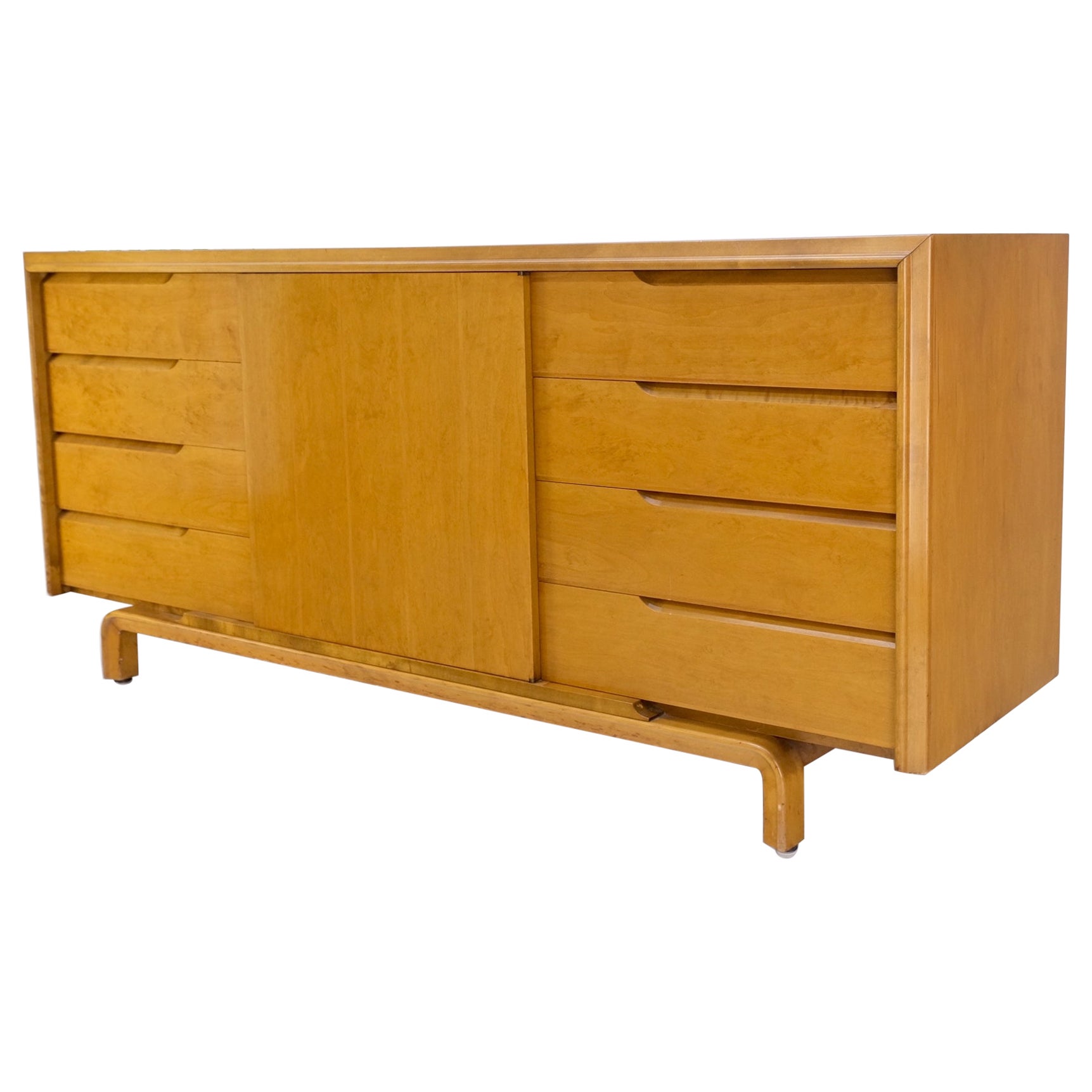 Offered is a beautiful vintage midcentury credenza designed by American designer Edmond J. Spence. Has ample storage space with four dovetailed drawers on each side and a middle door with one drawer and space for storage inside. One top drawer has dividers. All pulls are hidden. Looks to be made of birch. It is in good vintage condition for its age with some noticeable wear including surface scratches throughout, chips on the wood, stains, and other age wear. Review pictures carefully and message us for any extras. It is not signed. Dimension: 72" W x 20" D x 31.5" H. 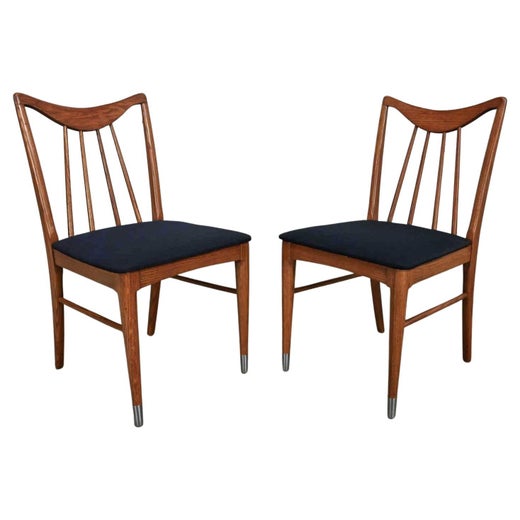 Edmond J. Spence played an important role in promoting the tenets of Scandinavian modernism in the United States but his name remains conspicuously omitted from the history books. He was an American furniture designer who is known for having introduced the West to unfamiliar cultural tastes and translating their subtleties to appeal to mid-century-era consumers.

Spence honed his eye for good craftsmanship as a young man. His family owned a furniture manufacturing company based in Batavia, New York. While not much has been reported about his schooling, it was not long before he started designing his own nightstands, end tables, chairs and more — all of which exhibited the appealing traits associated with mid-century modern furniture. Spence experimented with form and ornament owing to inspiration he gathered from international influences.

During the 1950s, Spence drew on Asian and Swedish influences in developing ideas for his own style of modern furniture. He incorporated aspects of Mexican design to create the Continental-American collection. Manufactured in 1953 by Industria Mueblera, this collection of sculptural wooden furnishings with brass details epitomizes Spence’s ability to draw attention to the most integral parts of global design while adding his own modern spin. The designer’s Coronation Group — a series of dressers, cabinets and more in blonde woods that featured decorative birch veneers — was built by artisans in Sweden and imported for sale to postwar homeowners in the United States by Massachusetts furniture company Walpole.

Spence’s “Peineta” chair — a work of mahogany, plywood and woven palm that is demonstrative of Spanish Colonial influences and is part of the Continental-American line — has long been on display in the Los Angeles County Museum of Art while other works are held in the collection of the Metropolitan Museum of Modern Art. And if Spence hadn’t captured the hearts of Americans by way of Industria Mueblera showrooms and alluring ads in Interiors magazine, some of his furniture was used as set decoration for the widely loved sitcom I Love Lucy.

1stDibs Buyer Protection Guaranteed
If your item arrives not as described, we’ll work with you and the seller to make it right. Learn More
About the Seller
4.9
Located in Wilmington, DE
Gold Seller
These expertly vetted sellers are highly rated and consistently exceed customer expectations.
Established in 2008
1stDibs seller since 2018
273 sales on 1stDibs
Typical response time: <1 hour
More From This SellerView All
People Also Browsed
You May Also Like
Featured in Design ValuesView All