With Clean Lines and Neutrals, Christina Cole Imbues Interiors with an Understated Cool 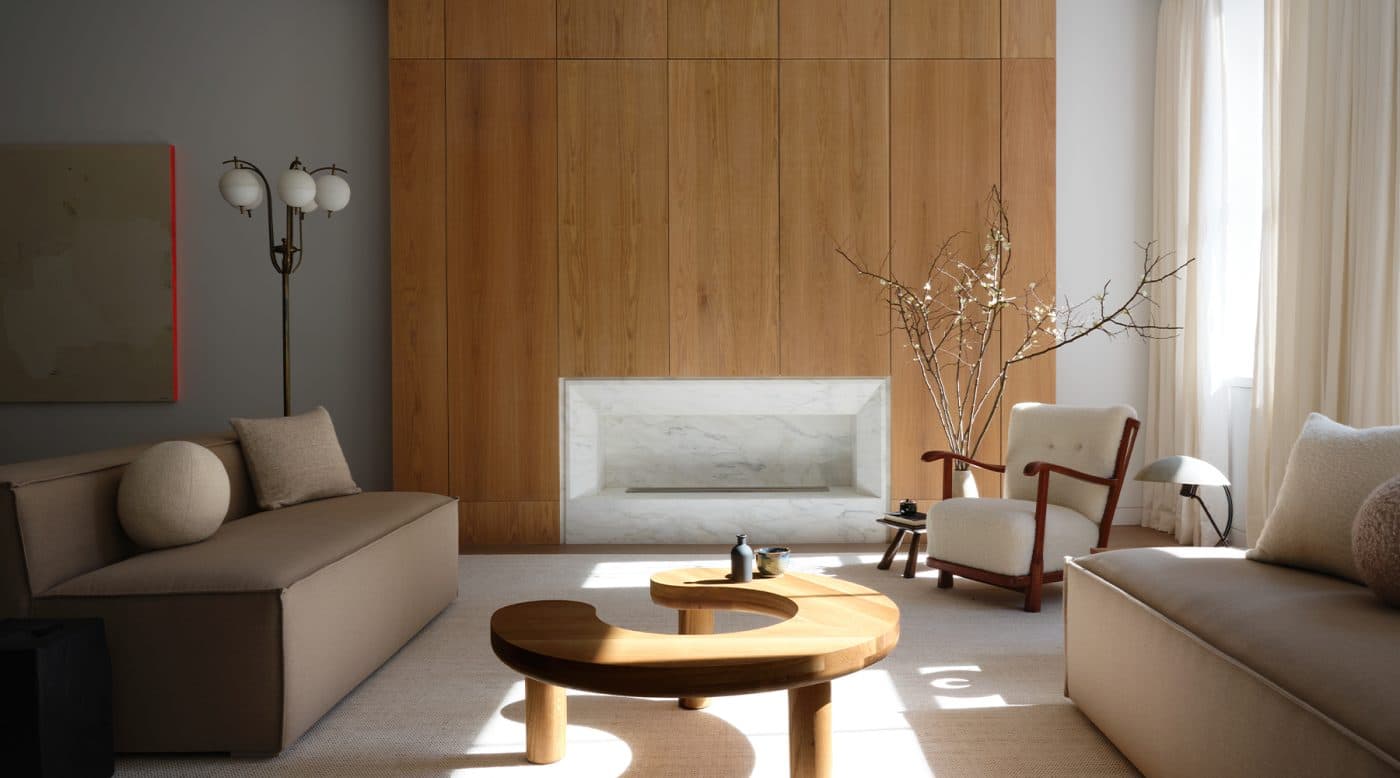 November 6, 2022A husband and wife with three very young children were building a new house in Texas. But construction was taking a long time, and, recalls designer Christina Cole, “they started looking for something that would move a little faster.” Or more than a little: The couple bought a loft in Manhattan’s Soho neighborhood and asked her to have it ready in three months.

Cole, an Austin-based designer with an architectural background, got to work devising ways to make a big impact on a tight schedule. To give the open living area a focus, she turned a marble fireplace surround into an architecturally scaled feature by augmenting it with vertical oak panels. Her goal was to make sure the fireplace didn’t need anything else — neither flanking bookcases nor an elaborate mantelpiece — to seem important.

That geometry is reinforced by the (almost) U-shaped coffee table, designed by Cole as a curvy counterpoint to the blocky sofas. Other punctuation marks include a lambswool-covered Fritz Hansen lounge chair, circa 1940, next to a Carl-Axel Beijbom–style table from the Dutch gallery De Huiszwaluw, both via 1stDibs. But an apartment with too many big pieces would have been monotonous. Outside the kitchen, a diminutive painting by the Italian artist Angelo Savelli, from Farrago Design, hangs above a tiny stool from Adrianna Shamaris, more 1stDibs finds.

A room with two many rectangles could also have been boring. That’s why the vintage brass and opaline-glass floor lamp gets center stage. “It has an Art Nouveau feel, but it’s Italian mid-century from Arteluce,” Cole says. Its globes seem to commune with the larger Isamu Noguchi Akari lamp over the dining table, the spherical ceramic vase on a vintage travertine pedestal and the pebble-like sofa cushions from Zak+Fox. At the same time, the fact that there are three sofas of the same model helps reduce the amount of visual information. “These are clients,” Cole says, “who appreciate restraint.”

So does their designer. Cole, a Houston native, studied architecture at Catholic University in Washington, D.C., then taught the subject there and at Catholic’s Barcelona campus. Just when she had decided to go to work for an architecture firm, the 2008 crash made good jobs scarce. So, she launched her own practice in D.C. in 2010. A few years later, she married and moved back to Texas. All along, she was exploring ways of keeping rooms uncluttered.

“I can appreciate a very layered space and understand why some people might find that comforting,” Cole says. But she prefers to choose every item with care, “including items at the accessory scale,” and then keep them apart. “To be appreciated,” she notes, “fine pieces need room, and that’s why I like white space.”

And she means white space. “We don’t use chintz,” Cole says about her firm’s approach. “We don’t use a lot of pattern. We don’t use pastels or primaries or jewel tones. What we use are natural materials, which provide all the color and texture we need.” Now that she works in Austin, she finds that her approach is particularly popular with people moving there from the East and West Coasts.

Many of those newbies arrived in Austin during the pandemic, when the real estate market was at full boil, and had to buy places they didn’t love. “There just wasn’t enough inventory,” says Cole, who had several clients ask her to make their houses more like the ones they wished they could have bought. One couple from Los Angeles purchased a house that was a little more modern than they might have liked. They asked Cole to respect the architecture but give the house more gravitas. She did that by creating rooms with classy, and sometimes classic, furnishings, including pieces she designed herself.

In the living room, a custom sofa and daybed are arranged around a coffee table by the young German designer Fabio Vogel, and behind the sofa is a bench from The Future Perfect. The glass block side table is a Wyeth Original, circa 2017. Johannes Andersen dining chairs from the Danish manufacturer Uldum Møbelfabrik were reupholstered in a linen velvet.

The pieces pop against a fireplace that Cole deliberately transformed into a neutral backdrop. “The original hearth,” she explains, “was timid and nondescript, with oddly placed horizontal reveals. It was a missed opportunity.” So, she reinforced the cantilevered hood with steel supports, allowing it to project out far enough to create strong shadow lines. By removing the reveals and adding plaster, she was able to create a quietly commanding composition.

In the kitchen, the clients had no appetite for a gut renovation, but Cole redid the counters and backsplashes in a dramatically veined marble. And she created custom bronze legs for the island, a relatively easy way to add a traditional detail. She did more work in the primary bathroom, adding an oak vanity and sconces by Australia’s Volker Haug Studio.

In the primary bedroom, the headboard and end tables were designed by Cole. The pine table at the foot of the bed is from the Paris flea market. Lamps from Rose Tarlow help illuminate the Japanese screens from the clients’ collection.

The nursery down the hall is almost as sophisticated. Echoing the Japanese screens are two panels that Cole had covered in wallpaper from Gracie Studio. “The couple wanted the nursery to flow with the rest of the house,” explains the designer.

In the husband’s office, Cole covered the walls in oak paneling with bolection moldings and chose a mid-century Danish chair with teak arms and merino-wool upholstery. Her overriding objective, she says, was to make the house feel custom — as if she and the clients had designed it from scratch.

A bachelor pad in Washington completed about eight years ago reveals the evolution of Cole’s style. The one-bedroom apartment had a wall of exposed, but mismatched, bricks, which Cole had whitewashed.

As for furniture, the industrial context really set the tone. “We didn’t want it to feel precious,” she says. High ceilings allowed her to design 14-foot-high bookcases, which became architectural elements. Cole had to keep the fireplace where it was, but she designed a dramatic hood that helps anchor the space with industrial flair.

The apartment, Cole says, is “the oldest project that I still show in my portfolio.” So, would she do things differently in 2022?

“The overall composition wouldn’t change,” she says, noting that she would still whitewash that brick wall. “But now I have a wider range of resources to draw on, and that could only enhance what I do.”

The biggest surprise is that the owner’s bedroom/home office is entirely black. “I love the color black,” Cole says. “But I had never done an all-black room. I don’t really recommend it, but in this house, it worked. Practically everyone who sees it wants one.” At that, Cole sounds relieved. “After you’ve painted a room black, it’s hard to change your mind,” she says. “It’s a good thing it was the client’s idea.” 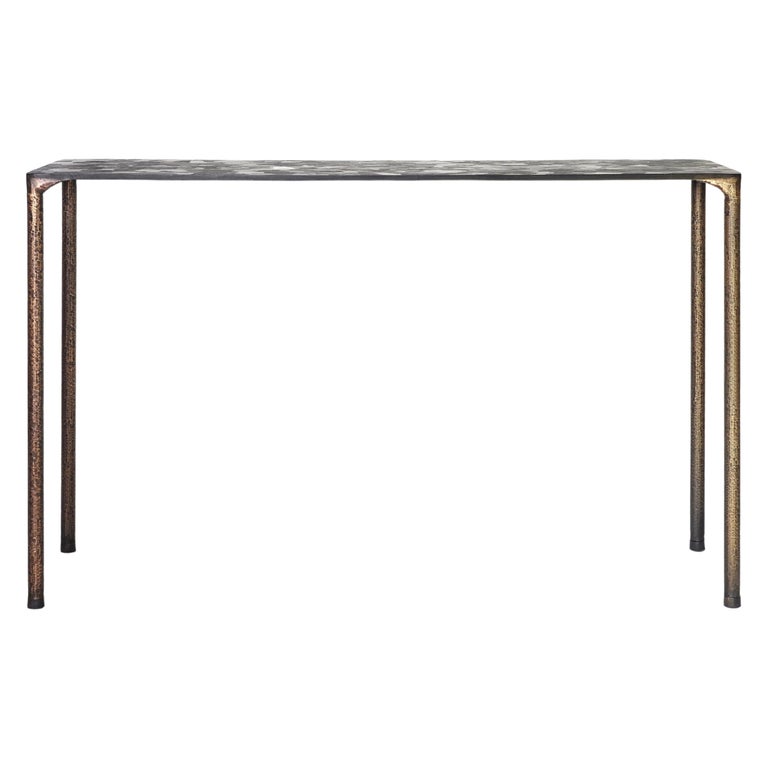 “While this table is a classic Parson silhouette, the ultra-thin dowel legs artfully hammered with a gradient finish brings sophistication and interest to this versatile console.” 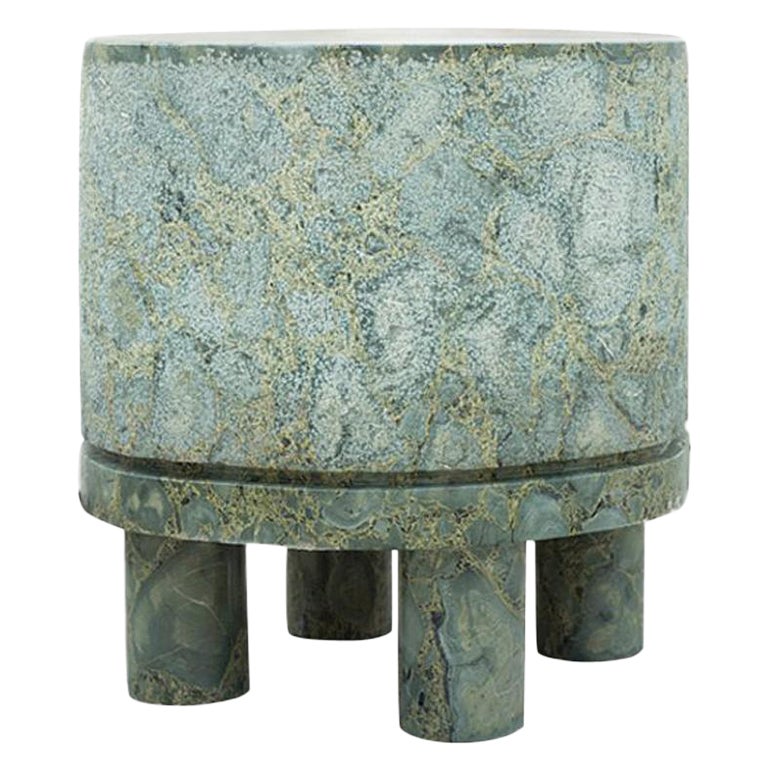 “I love the complexity of this piece. It is a more refined material with a primitive silhouette and the varied hand-sculpted technique adds an extra layer of detail. The verdigris hue of the marble provides an opportunity to bring color through natural material.” 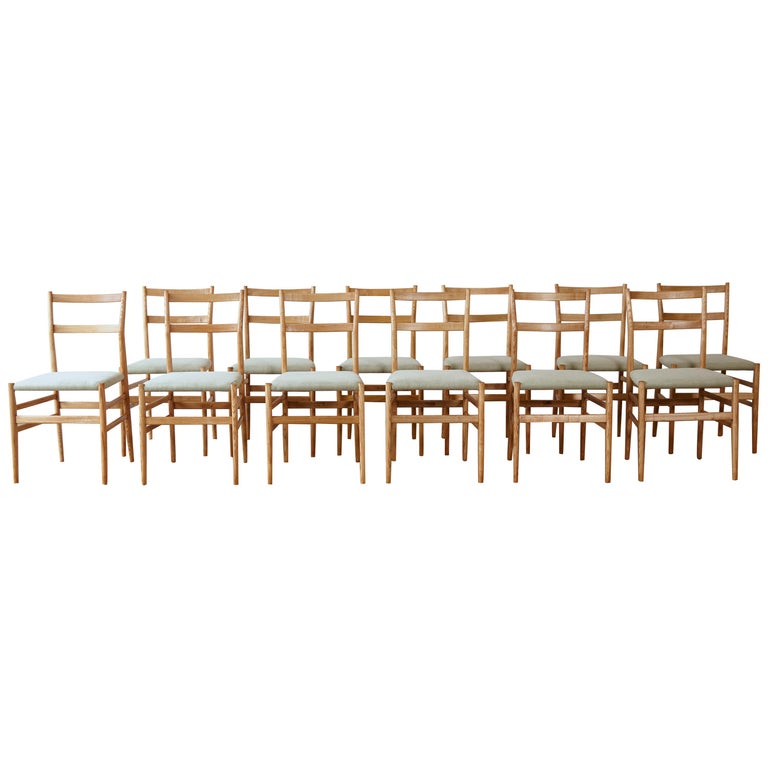 “This set of Legarras work as easily in a casual space as they do in a more formal dining setting. I’d love to see it paired with a Murano glass chandelier or a more monolithic dining table.” 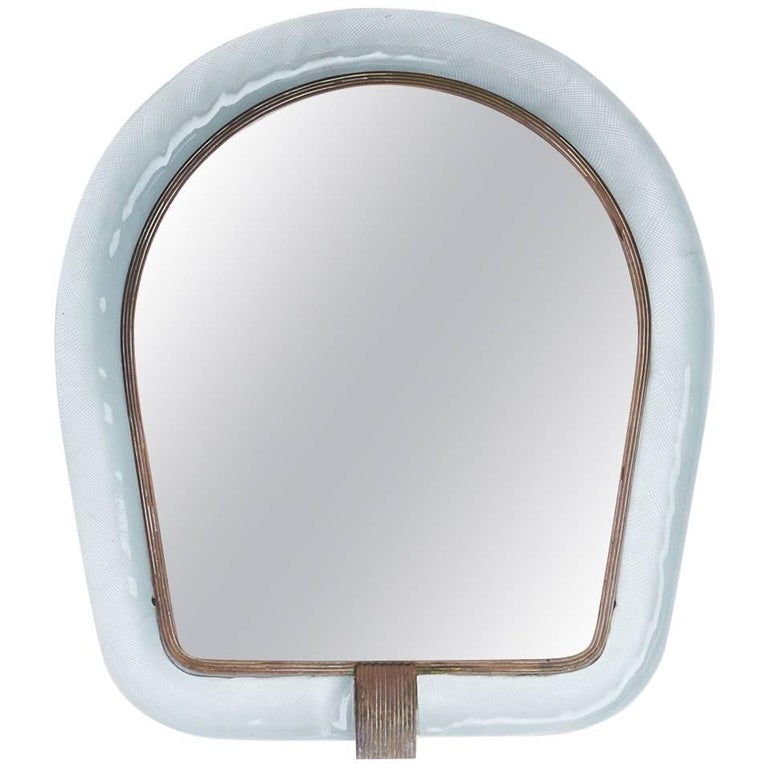 This mirror is a great investment piece. It is not only beautiful, but it also marks a collaboration between two Italian Greats — Venini and Carlo Scarpa. This collectible would be a lovely housewarming gift for the avid design enthusiast. 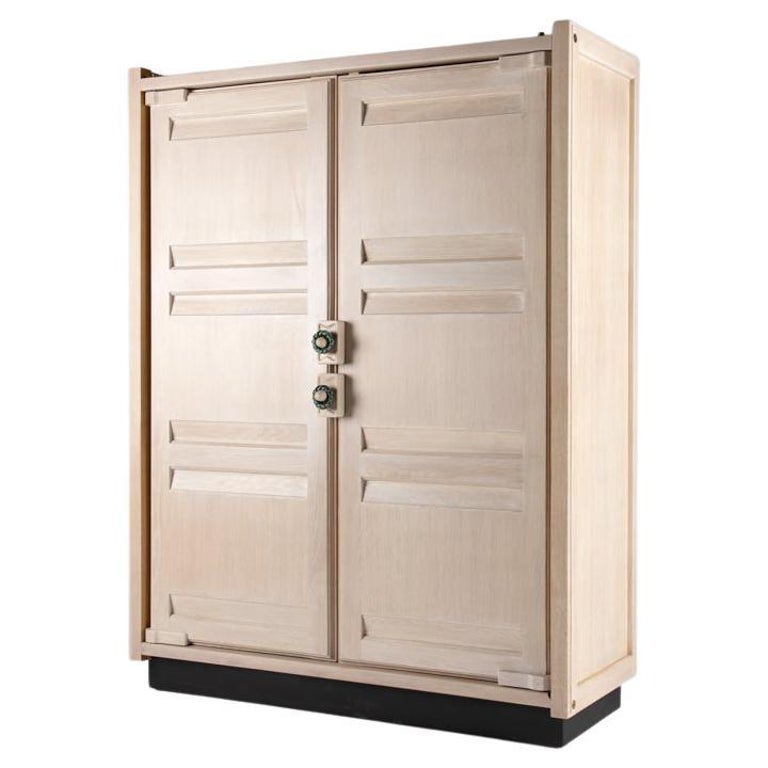 “While utilitarian in scale, this mid-century armoire is thoughtfully detailed with elements like delicate ceramic hardware, softening its broad silhouette.” 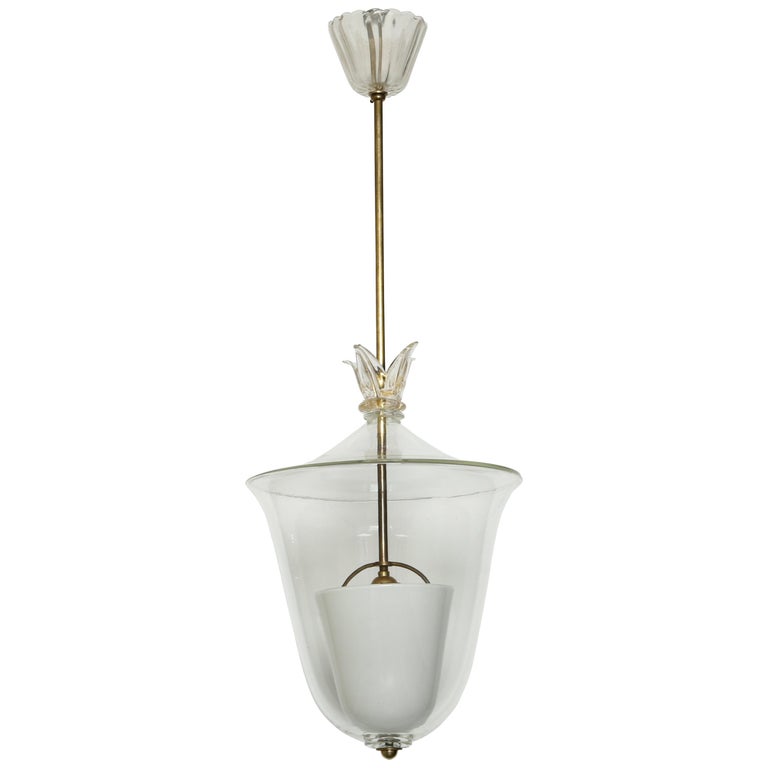 This pendant manages to balance romantic features without being fussy, a pairing that is infrequent yet coveted.