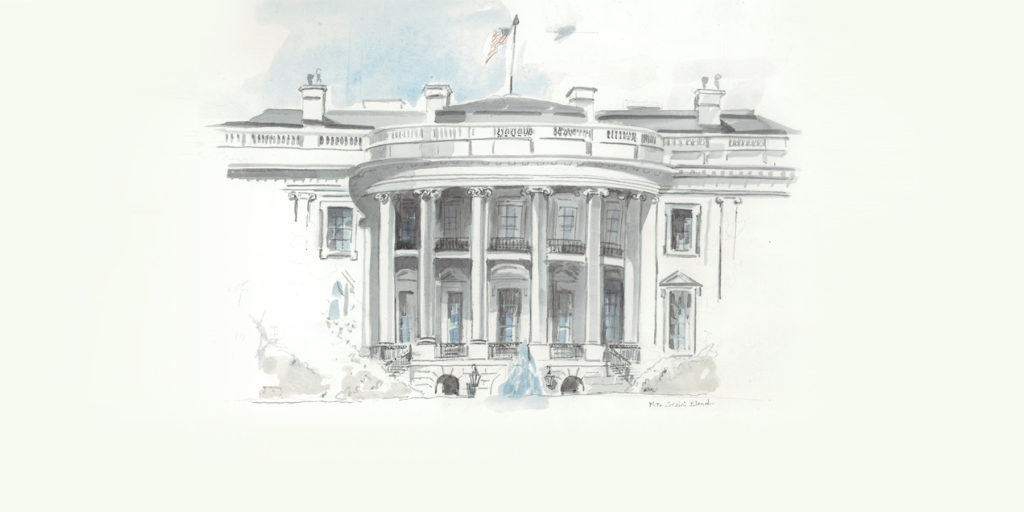 Proposing styles from chic and understated to mirrored and opulent, David Netto, Betsy Burnham, Robert Couturier, Alexandra Loew and Brian J. McCarthy reveal how they would decorate the executive mansion . . . for both candidates.

September 26, 2016Two would-be residents of the White House not only are ideological opposites but have dramatically different ideas of “home sweet home,” as evinced by these photos of Hillary Rodham Clinton, seen in front of her white-clapboard Chappaqua, New York, house in 2000 with husband Bill, and of Donald Trump, shown in 2010 in his gilded Manhattan apartment atop Trump Tower with wife Melania and son Barron. Photos by Chris Hondros/Liaison Agency (Clinton) and Regine Mahaux/Getty Images (Trump)

Each time a new president moves into the White House, the decor also undergoes a regime change, as the incoming First Family puts its personal stamp on the best-known residence in the United States.

Jacqueline Kennedy famously enlisted Dorothy Mae “Sister” Parish to redo the White House’s family quarters and focused on adding antiques that she thought worthy of the space, including wallpaper panels depicting scenes from the American Revolution. Working with her friend California designer Ted Graber, Nancy Reagan gave the executive mansion a bit of her over-the-top Hollywood style, bringing in hand-painted Chinese wallpaper and a rich color palette, particularly her signature scarlet. The Reagans also reintroduced a large number of antiques that previous residents had removed to a warehouse, such as a French Empire sofa purchased by President James Monroe in 1817 and mid-19th century Currier and Ives lithographs.

Come January, of course, a new First Family will occupy 1600 Pennsylvania Avenue. With that in mind, we’ve asked five leading American interior designers to imagine taking on the project of redecorating both a Hillary Clinton and a Donald Trump White House, bearing in mind the candidates’ sensibilities. Their schemes run the creative gamut, incorporating everything from a Trump throne room to a neutral-toned space in which Clinton can kick back and relax (while winning a lively game of Scrabble against First Gentleman Bill Clinton). It will be interesting to watch how the White House’s character actually evolves — whoever ends up living there next. 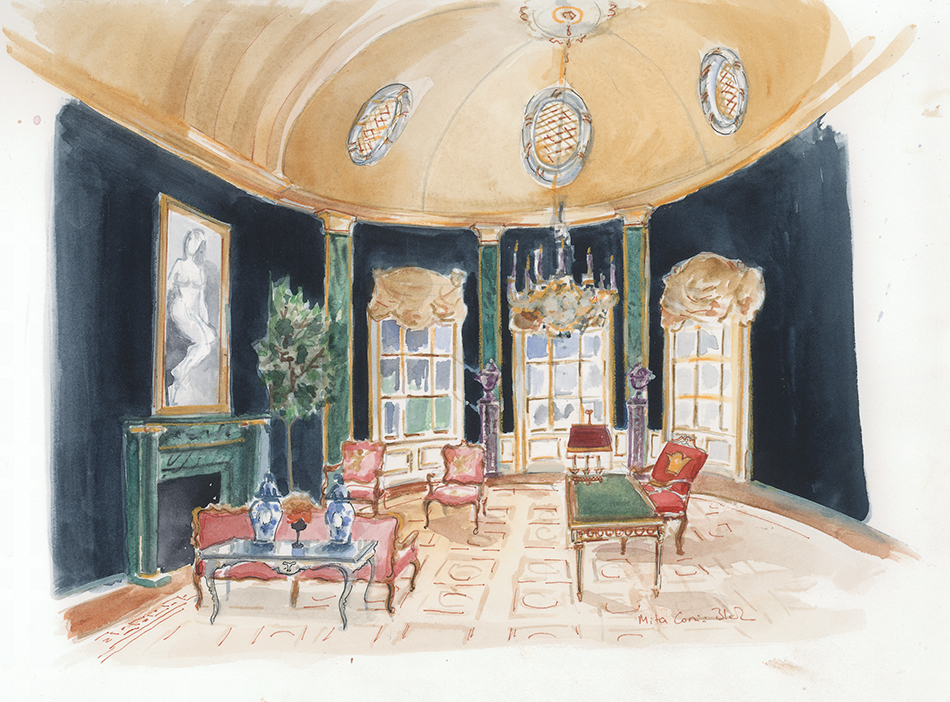 Ormolu, malachite-covered pilasters and a Louis XV throne-like desk chair — not to mention a Donald-style wig set between two blue-and-white porcelain ginger jars — are the (executive) order of the day in the space formerly known as the Yellow Oval Room, as reconceived and recolored here by David Netto for a future President Trump.

“Donald Trump loves things very shiny and 1980s, the decade that made him. I’m talking mirrors and brass. He would have serious withdrawal going from his black-glass-clad Trump Tower to the austerity of a whitewashed Georgian, so I think some floor-to-ceiling windows are a must. Since Trump likes to be associated with kings, he might replace all the door hardware with P.E. Guerin ormolu in the Louis XV style, like the bathrooms at the Ritz. The Oval Office could be turned into a mirrored throne room so Trump could check out his coif while establishing our new world order.”

“Present-day New York–isms aside, from her childhood in the Chicago suburbs to early married life in Arkansas, Hillary Clinton is a true Midwesterner. What would make a heartland native feel more at home than barrel chairs and dishcloth-checked curtains?

“Apart from all the folksy comforts essential to trust building, Clinton would also want her quarters to have a touch of legacy, and power. Coffered ceilings and velvet upholstery with hints of damask would instill a sense of gravity and history. Together, the high-low mix would provide the ideal backdrop for her to exert her executive authority. Oh, and a marble plinth, like the kind that usually holds a bust of a founding father, would showcase her Grammy.” 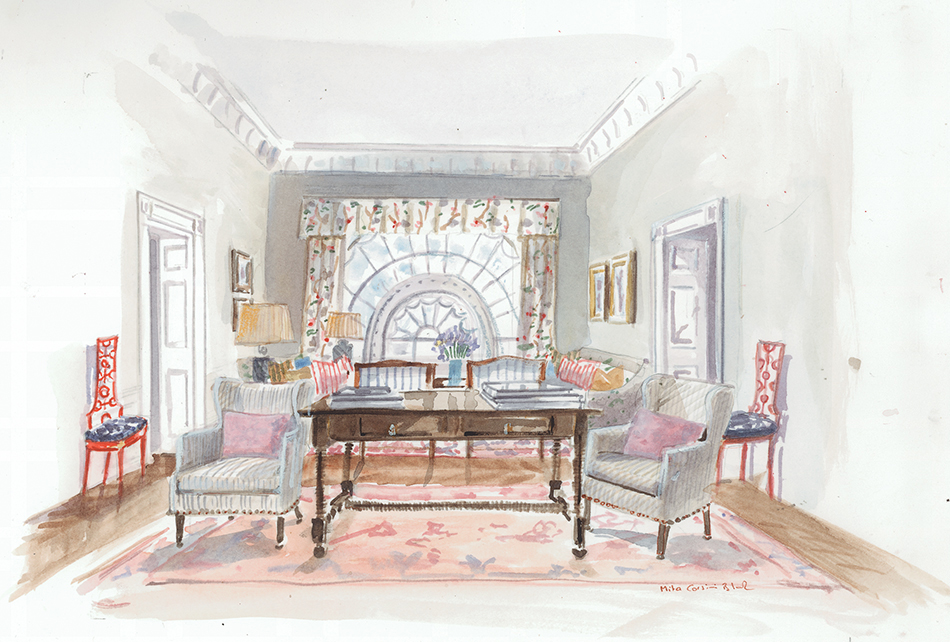 “The Clinton White House would be a pleasure for me to design because the Clintons are like many of my clients: professional people who are also family-oriented. I think they’d like my New England sensibility and the fact that my aesthetic is infused with a California twist. I want Clinton to be able to come home, loosen up and relax, so I’m seeing a Hamptons-meets-Malibu type of look.

“Beautiful case pieces with clean, classic shapes, funky vintage pieces mixed with fine antiques. I’d also introduce materials like cane and faux bamboo, as well as some chinoiserie. For upholstery, I’d make sure they had plenty of gorgeously tailored, deep, comfy pieces done tastefully in linens, ticking stripes and faded florals. I’d keep the palette light and crisp, with hits of color to make sure the vibe is a happy and open one. I’d layer sea-grass rugs with wonderful antique ones. I’d hang classic American paintings, of course, but lots of contemporary art and photography, as well.”

“This would be a stretch for me in many ways, because my design sensibility is anything but opulent and I know that’s what the Trumps love. I think it would be my job as their designer to introduce them to a new type of luxury, one that’s subtle, textural and refined. Think cashmere and linen, a sophisticated, neutral color palette, gorgeous wood finishes and simple, clean-lined antiques. And the modern art collection they could have — incredible!” 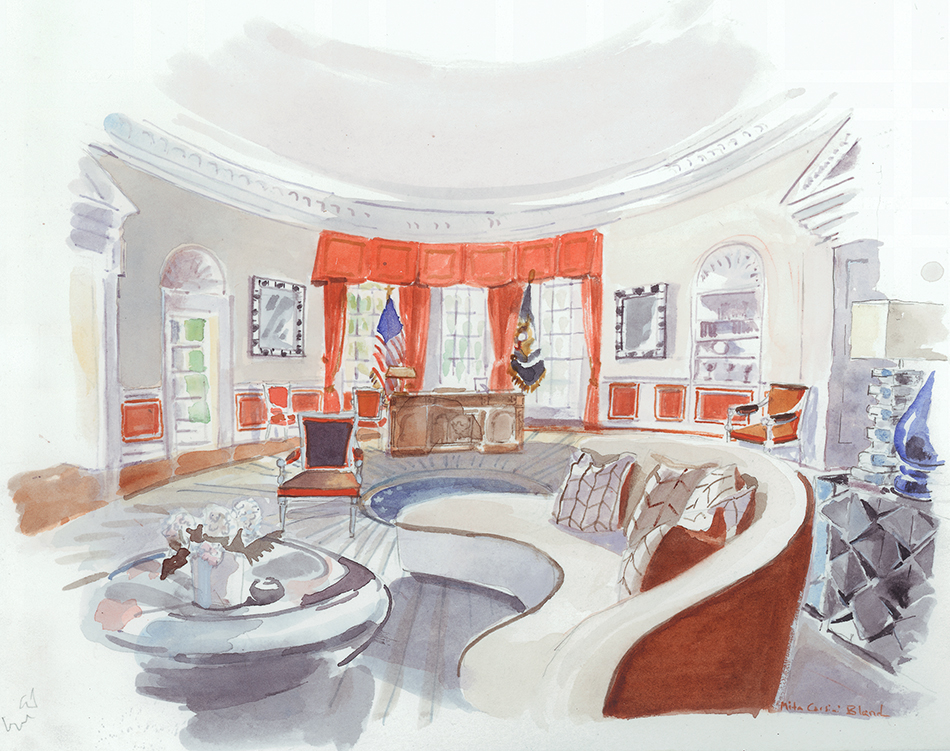 Robert Couturier took his inspiration for a Trump Oval Office — complete with rich orange hues, mirrored surfaces and the sweeping curves of a serpentine sofa by Vladimir Kagan and a coffee table by Mattia Bonetti — from a living room he created for an apartment on New York’s Fifth Avenue.

“Since Donald Trump is not a classic presidential character he should have a non-classic office. I’d suggest orange-paneled walls, similar to ones I used in a grand Fifth Avenue apartment several years back, and fill the room with show-stopping works by Vladimir Kagan (the sofa), Mattia Bonetti (the coffee table) and Willy Rizzo (the mirrored credenza). In all likelihood, the Oval Office would only be for show, since Trump seems to do most of his work from his bed, tweeting at 3:00 am.  With its sinuous lines and shiny surfaces, this scheme feels rich, which is an image that Trump wants to project. Rich and orange.”

“I would do a Sister Parish decoration, full of flowered fabrics, super-comfy furniture, deep-upholstered sofas and armchairs, and use American antiques. I can also see reimagining the Oval Office like Brooke Astor’s famous red-lacquer, brass-trimmed library as designed by Albert Hadley.” 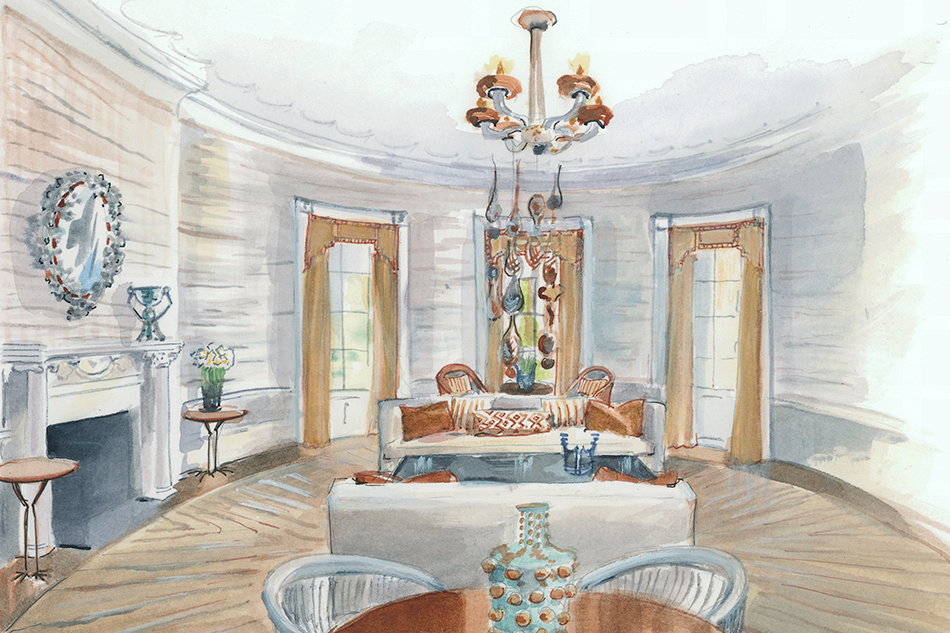 For Clinton, Loew saw a Yellow Oval Room that mixes influences from the candidate’s current home state of New York with those of the South, her husband’s homeland. The designer also wanted to introduce work by female creatives, both contemporary (such as sculptor Darcy Miro) and historic (such as ceramist Beatrice Wood).

“For Hillary Clinton, I would propose a White House that blends the best of Southern hospitality with the gravitas of her adopted home state, New York. In the Oval Room, which is for more informal meetings, I’d seek to create a frisson between muted and crisp, warm and tailored. Clinton’s White House would be chic, understated and polished.

“The room I envision features work by an international roster of women who are producing and creating in New York: fabrics loomed by hand in Brooklyn by Tara Chapas, exquisitely crafted wallpaper by Yolande Batteau’s Callidus Guild, a mirror by sculptor Darcy Miro. Other twentieth-century women whose work would be featured include Gabriella Crespi, Beatrice Wood, Ruth Asawa and Méret Oppenheim.

“No florals or chintz in this design, but always a fresh bouquet of jonquils — a celebrated flower in Arkansas. Shades of creams and steely blues and a hint of terra-cotta. Bouclé fabrics mixed with polished wools. Because of Clinton’s modern perspective and global experience, the furnishings would be international and noteworthy for their blend of craftsmanship and innovation, particularly from women artisans and women-led studios and workshops.” 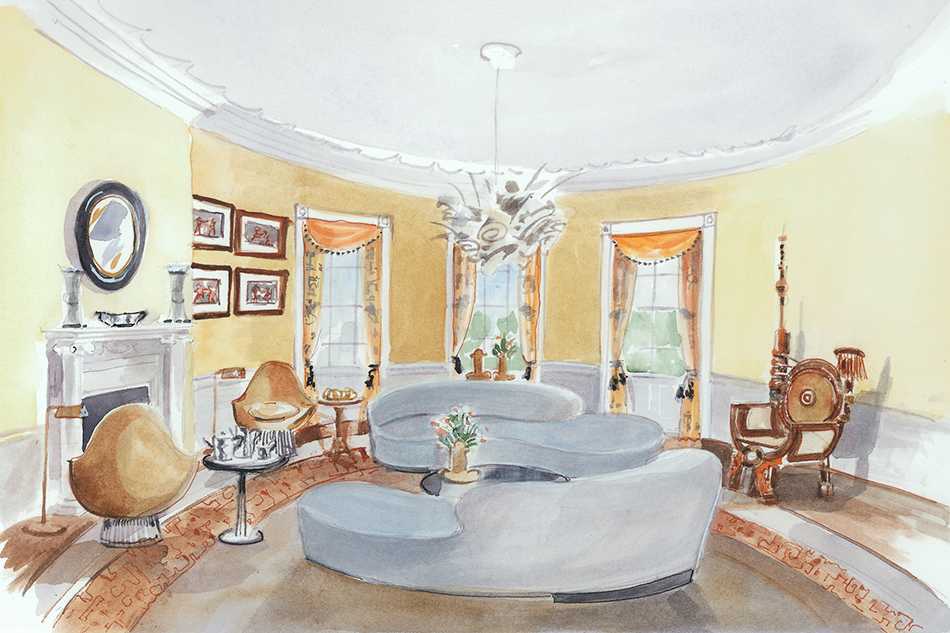 “Trump has said he would do little to change the White House, and I agree. I would seek to keep it classy and steer things away from the temptation for gilding. (Some japanning, in lieu?)

“For Trump, I’d surf the line between traditional and bombastic. A seemingly traditional toile de Jouy on the windows, for example, by Sheila Bridges, which lampoons the stereotypes of the African-American experience. (She calls it Harlem Toile.) I imagine Trump holding forth in a Throne chair by Carlo Bugatti. Ingo Maurer’s Porca Miseria! chandelier is customized with Barro Negro pottery from Oaxaca, and an Aztec design is featured on the border of a rug by Jules Leleu. The furniture is by American greats of 1970s vintage, Warren Platner and Vladimir Kagan. The silver service is by William Spratling and produced by Taxco, a Mexico-based workshop.

“And I would fill Ettore Sottsass’s Shiva vase with jonquils, to remind Trump of Hillary Clinton.” 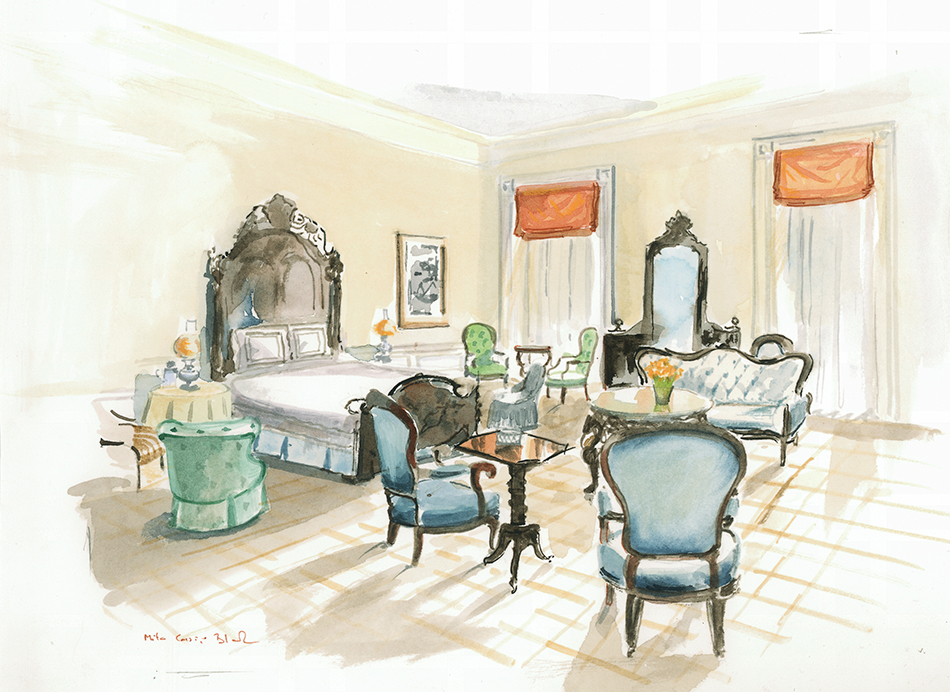 For the historical public spaces in the Clinton White House — such as the Lincoln Bedroom, illustrated here — Brian J. McCarthy proposes a light refresh.

“For Hillary Clinton, I would approach the White House project with an American-crafts theme, highlighting American artisans. For the historical rooms, I would just think about it from the perspective of freshening up the spaces. But in the private quarters, I would take a more eclectic approach, adding a lot of joy, culture and personality to the spaces. There is such a great history of American art and artisans to pull from.”

“It pains me to say this, but I would have to decline the project!”