Why 1980s Memphis Design Is Popular Once Again

Love it or hate it, postmodern Memphis Group furniture is back. Some people think of the Milan-based collective as the design equivalent to Patrick Nagel’s kitschy screenprints, but for others Memphis represents what made the early 1980s so great: freedom of expression, dizzying patterns and off-the-wall colors.

“As someone who was born in the 1980s, Memphis at times feels like the grown-up, artsy version of the toys I used to play with,” says Shaun Kasperbauer, cofounder of the Brooklyn studio Souda. “It feels a little nostalgic, but at the same time it seems like an aesthetic that’s perfectly suited to an internet age — loud, colorful and utilizing forms that are graphic and often a little unexpected.”

New technologies have certainly helped reboot Memphis, as is evidenced by Kartell and its recent collection “Kartell Goes Sottsass. A Tribute to Memphis.” The legendary Ettore Sottsass had initially presented his drawings of taboret stools, vases and lamps to the Italian design company back in 2004, but it took 11 years — and advances in plastic materials and injection techniques — before the company could produce the concepts commercially.

To mark the launch, Kartell tapped Memphis Group members George Sowden and French-born Nathalie du Pasquier to upholster various chairs in eye-popping fabrics. (No stranger to such commissions, in 2014, du Pasquier designed a range of patterns for American Apparel.) 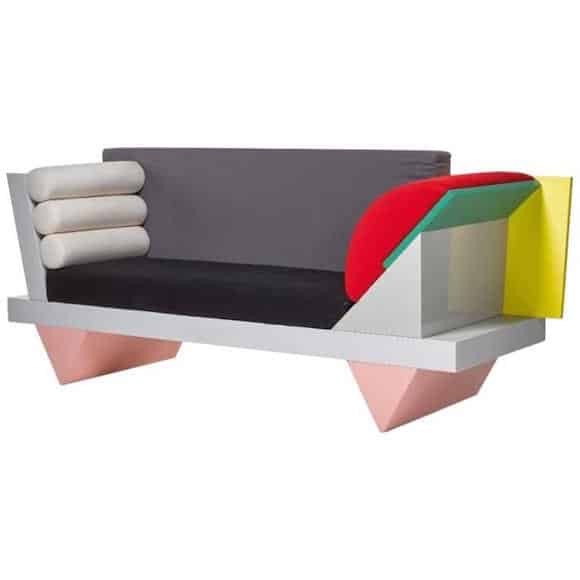 As gallery owner Gabrielle Ammann notes, Sotheby’s recent auction of David Bowie’s Memphis collection also brought the movement back into the spotlight, and rightly so. “I think that a review of the revolutionary 1980s Memphis period is long overdue,” says Ammann, who showed a Tetris-like 1973 tapestry by Andrea Branzi at the Collective dEsign fair earlier this month. “Looking into who collected those pieces,” she adds, “we find visionaries like Karl Lagerfeld and Bowie.” Clearly, they were onto something.

The Memphis story begins in 1980, when Sottsass, then a beacon of Italian postmodernism, tapped younger designers to develop a collection for the Milan Furniture Fair the next year. The mission: Boldly reject the stark minimalism of the 1970s and shatter the rules of form and function. So as a record of Bob Dylan’s “Stuck Inside of Mobile” played on repeat, they took their name from the song, devised their marketing strategy and plotted the postmodern look that would come to define the decade of excess — primary colors, blown-up proportions, playful nods to Art Deco and Pop. 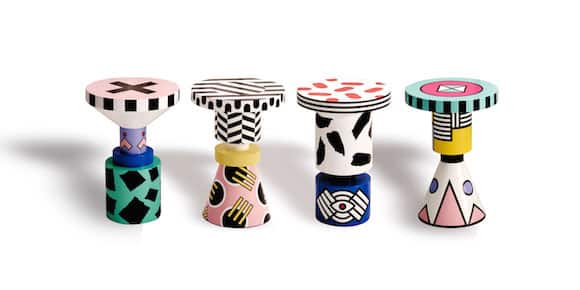 Eventually, the Reagan era gave way to cool 1990s minimalism, and Memphis fell out of fashion. Sottsass left the group in 1985, and by 1987, it had disbanded. Yet 35 years later, Memphis is back and can be traced to today’s most exciting designers. “We have enough distance from the original works to place it very clearly in its historical context,” says Anna Karlin, whose funky Pattern Chess Piece stools clearly nod to Sottsass. “It is only when this happens that there is the space to pay our own respects and have fun with the influence.”

As if to confirm this, the Memphis Group is getting institutional accolades as well, with places like the Met Breuer and Triennale di Milano holding exhibitions this year to honor the centennial of Sottsass’s birth.

Below, we’ve gathered eight seminal works that embody the spirit of Memphis. 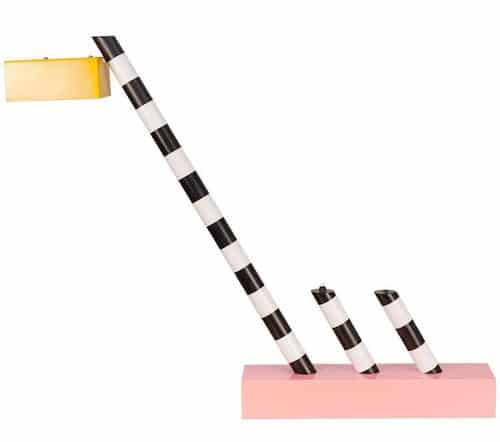 Is it a snake, a zebra or both? With its playful anthropomorphic form, this lamp suggests all three. 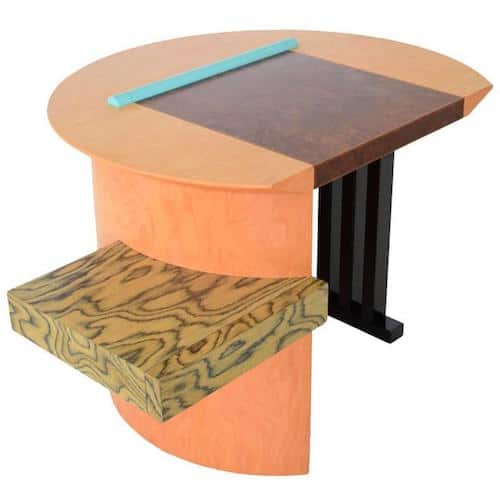 Known for his unorthodox use of materials, Cibic’s writing desk (which looks anything but) features lacquered wood and a pastel veneer. 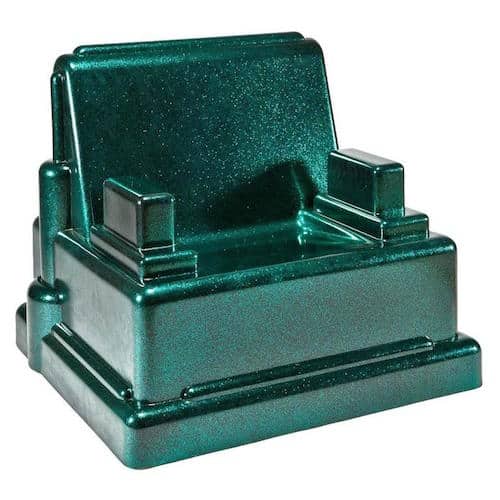 Who said molded fiberglass can’t be used in furniture? Zanini tried it out, and in 2014 musician St. Vincent sat on a metallic pink one for her self-titled album cover. 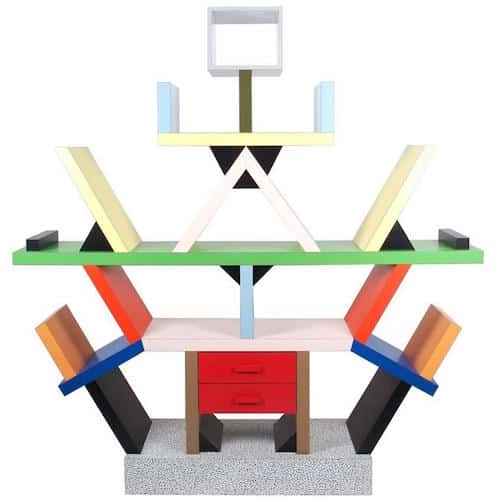 Perhaps the most iconic Memphis design, this bookshelf cheekily nods to Art Deco with its symmetrical Egyptian motif. 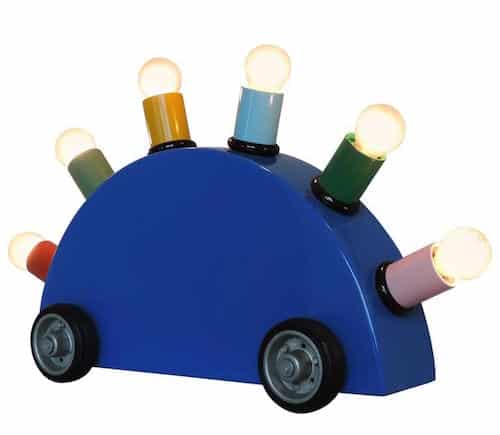 Bedin compared her cartoonish wheeled lamp to “a small dog that I could carry with me.” Initially, design buffs were baffled, but it became an instant classic. 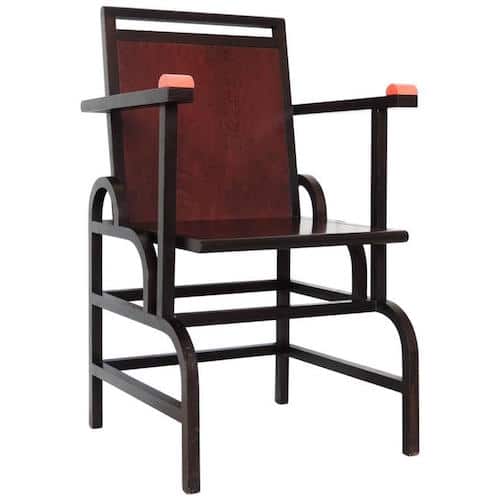 Loaned to the Design Museum in 2001, this chair pokes fun at the notion of an ornate king’s throne. 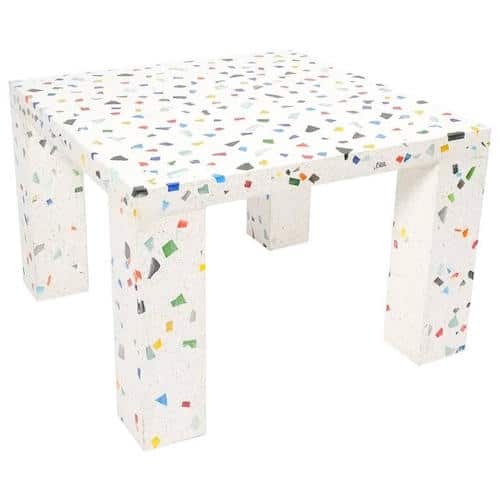 A high-low mix of materials helped defined Memphis, as evidenced by Kuramata’s table made from colored glass-infused terrazzo. 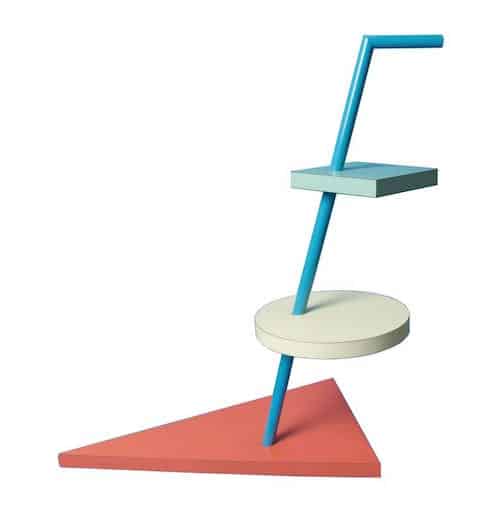