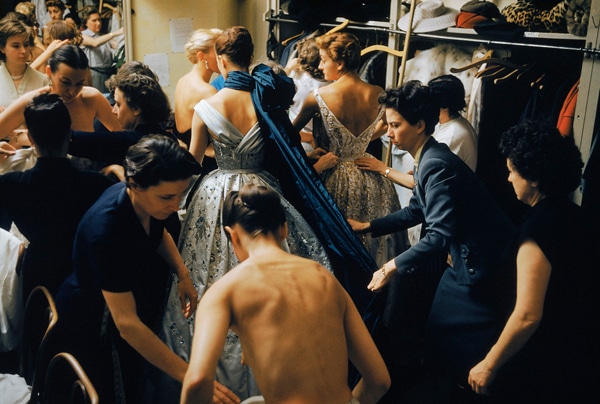 Technically speaking, the French term haute couture refers to the made-to-order creations of an elite group of designers, which currently include Chanel, Christian Dior, Givenchy, Jean Paul Gaultier, Versace and Valentino. Membership in this group is tightly regulated by the intimidating-sounding chambre syndicale de la haute couture — founded in 1868! — which mandates that all designated couturiers must maintain a full-time workshop, or atelier, of skilled artisans in the city of Paris. In these ateliers, seamstresses, designers and drapers meet with clients over multiple fittings to create one-of-a-kind pieces of extraordinary beauty and complexity.

But the painstaking, staggering detail of couture garments outstrips the ability of even the most skilled brand atelier. Which is why the marquee names and labels who take to the runway rely on a host of even more specialized talents to fabricate, construct and execute highly specific elements of each piece. When you’re constructing, say, the hem of an ostrich-feather-trimmed ball gown, you don’t pick up your plumery from a local crafts store. Instead, you outsource the task to a 19th-century atelier that has made it its business — for nearly 150 years — to do just that. Though these fascinating micro-businesses do not have the same name recognition as their global, glamorous couture partners, they represent a crucial part of the haute couture design process. Read on to meet eight such ateliers, and learn how they help to preserve the rich history and heritage of their crafts.

Founded by the eponymous Georges Desrues in 1929 and purchased in 1984 by its primary client, Maison Chanel, Desrues is Paris’s leading producer of costume jewelry and buttons. During his lifetime, the late Desrues was known for his work with the likes of Jeanne Lanvin, Christian Dior, and Yves Saint-Laurent.

Recognized since 1936 for its bold experimentation with new shapes and materials for hats — producing modern takes on classic forms and utilizing an abundance of feathers, lace, beads and chains — Maison Michel is celebrated today for its signature collection of ready-to-wear hats and hat accessories.

Formed in 1880 as purveyors of “plumes-for-garments” to department stores, feather-master Lemarié was integrated into the high fashion circuit in 1946, when André Lemarié joined the family business. Since then, the atelier has collaborated with some of the most prestigious names in haute couture, such as Balenciaga, Nina Ricci, Givenchy, Christian Dior and Chanel — who purchased it in 1996 — and is the sole remaining feather workshop in France.

Paris’ most venerated embroidery studio, the 130-year-old Maison Lesage is the preeminent house of meticulous handiwork. Purchased by Chanel in 2002, the atelier employs highly skilled artisans in white lab coats — described by the French as “petites mains,” or “little hands” — who attach sequins, beads, rhinestones, shells, ribbons and feathers to delicate swaths of fabric for Dior, Louis Vuitton and Yves Saint-Laurent.

Helmed since 2008 by master shoemaker Philippe Atienza, Massaro was founded in 1894 and has since been passed through the careful hands of three generations. Endorsed by the Duchess of Windsor, Marlene Dietrich, and Barbara Hutton — and selected as the official shoemaker for King Hassan II of Morocco — Massaro has shaped such iconic pieces as the Grès pump (1955) and the Chanel sandal (1958).

Master corsage-maker since 1896, Guillet has reimagined daisies, forget-me-nots, jasmine, roses and lily of the valley as hairpieces, tiaras and crowns for the world’s biggest couture ateliers. Woven into silk, organza, muslin, lacquered lace and gold chain, the label’s floral accessories joined the Chanel constellation of historic houses in 2006.

Master glove studio Causse was founded in the windy French town of Millau in 1892. Causse has since come to define the aesthetic for this invaluable winter accessory, framing it as a haute couture decoration for the hand, always crafted from fine leathers and rare animal skins and embellished with precious stones, lace and fine trims.

One of the last “pleat makers” in Paris, the legendary Lognon house was formed by Gérard Lognon’s great grandmother during the reign of Napoléon III. Today, the atelier employs a mere five craftsmen, who delicately fold the cloths used by renowned haute couture houses — including Hermès, for its iconic, pleated-silk squares — lawyers, for their official gowns, or costume directors working in the realms of cinema and opera.

To see the work of these ateliers in action, shop haute couture on 1stdibs