From The Jewellery Editor: The Many Watches of James Bond

Maria Doulton of The Jewellery Editor is one of the most knowledgeable minds on the web when it comes to fine jewelry and timepieces. We asked her to pick a few of her favorite pieces, and give the readers of The Study a preview of what you can find on her site. Read on for an up-close look at the watches of cinema’s favorite spy, James Bond! 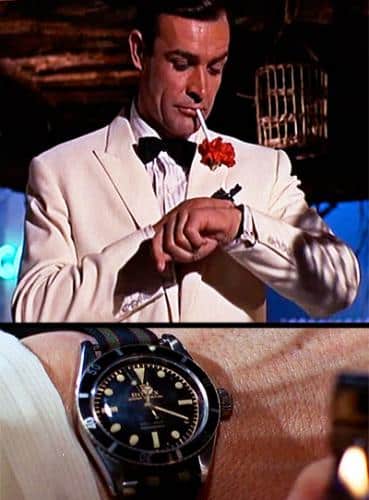 Apart from the women, the cars, and the martinis, James Bond’s most famous accessories may just be his watches. Last month, to coincide with the 50th anniversary of Goldfinger, Omega auctioned a Seamaster Aqua Terra watch in dazzling yellow gold that ended up fetching eight times its estimated price.

Author Ian Fleming was meticulous about the kind of watch his secret agent should wear: “He could not just wear a watch. It had to be a Rolex,” he said in his book “Casino Royale,” convinced that “a gentleman’s choice of timepiece says as much about him as does his Savile Row suit”. Rolex watches appeared in nine of the James Bond sagas, forming a vital part of his identity and style manual.

Rolex was the original James Bond watch. Watch buffs will have spotted the Rolex Submariner watch — reference 6538 — on Sean Connery’s wrist in Dr. No in 1962. It was a perfect match: the world’s first dive watch, a resilient yet elegant piece to accompany the rugged yet elegant 007 on his adventures. Connery wore the Rolex Submariner watch throughout his seven screen appearances, and the watch became so associated with Bond that collectors today still refer to this model as the James Bond Submariner watch.

Read more on The Jewellery Editor to learn more about James Bond’s history of timepieces.