6 Architectural Masterpieces That You Can Rent for a Vacation

Want to sleep in a house designed by Frank Lloyd Wright or Peter Zumthor? The website Plans Matter lets you reserve vacation homes that you'd normally only read about in architecture books.
by Marisa Bartolucci
Pin
Share
Tweet
Email 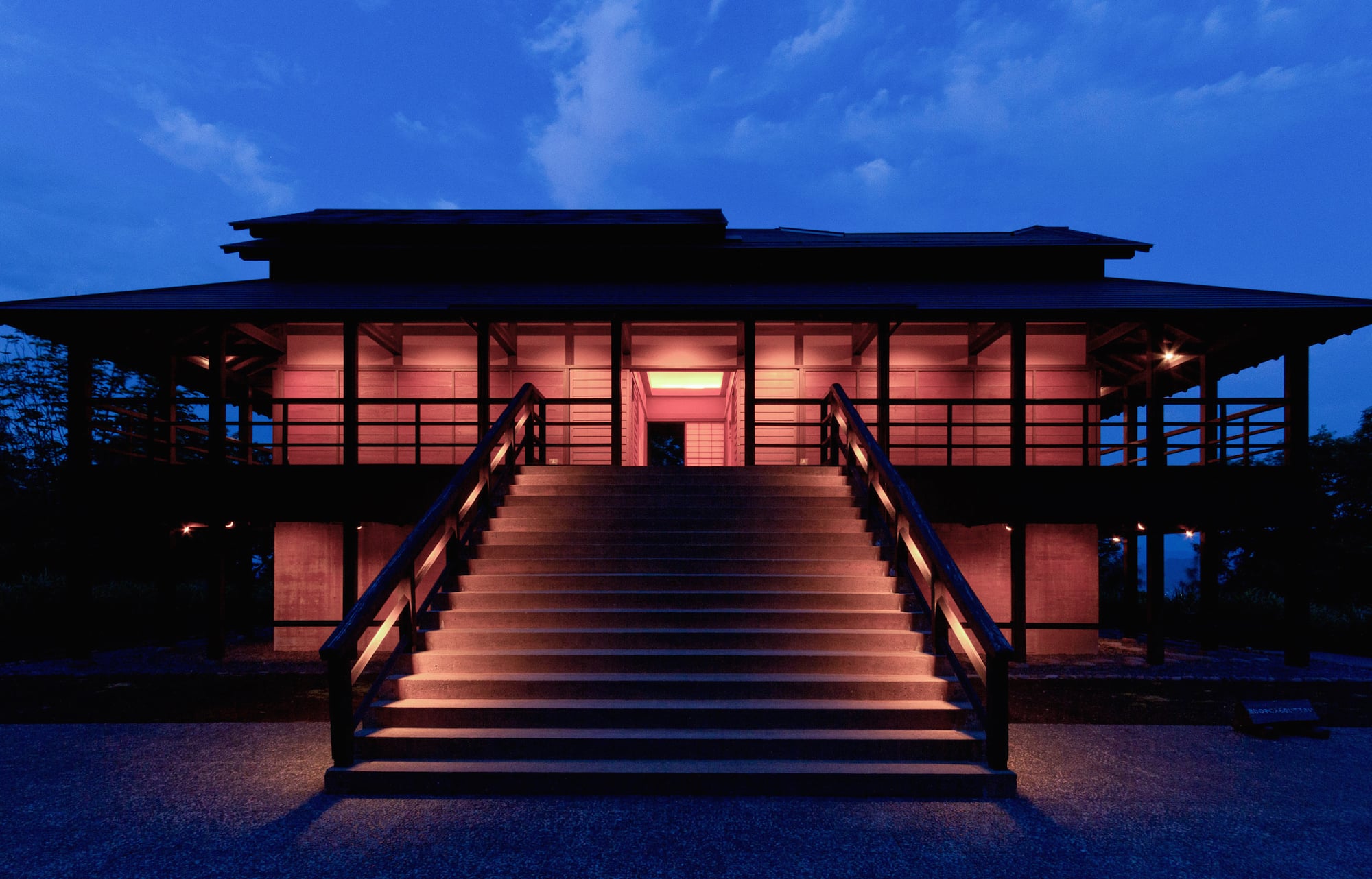 The House of Light in Niigata, Japan, has a color-changing Skyspace created by James Turrell. Photo by Tsutomu Yamada, courtesy of Plans Matter

Good news, architecture lovers: There is finally a site to connect you to the many architectural masterpieces now available to rent for a night, a week or longer across the globe. Plans Matter is the brainchild of Connie Lindor and Scott Muellner, a husband and wife team based in Minneapolis who met in architecture school. They hatched the idea of this rarefied version of Airbnb after spending some time at Sawtooth Cabin, a marvelous minimalist pavilion on Lake Superior, designed by their former architecture professor Julie Snow.

So exhilarated were they by living in a space where inside and out truly merged that they became determined to help others experience it — and other exceptional works of contemporary architecture.

Plans Matter has been up for two years, but the site is only now establishing critical mass with a worldwide selection of offerings. “Initially, we had zero properties,” says Muellner with a chuckle. “It took a long time to get through to the right people and get homes secured for the site. Now, we have a backlog of hosts with amazing properties we haven’t yet processed.”

New listings will be appearing throughout the fall, but don’t wait to visit the site as there’s already embarrassment of architectural riches. Here’s a sampling: 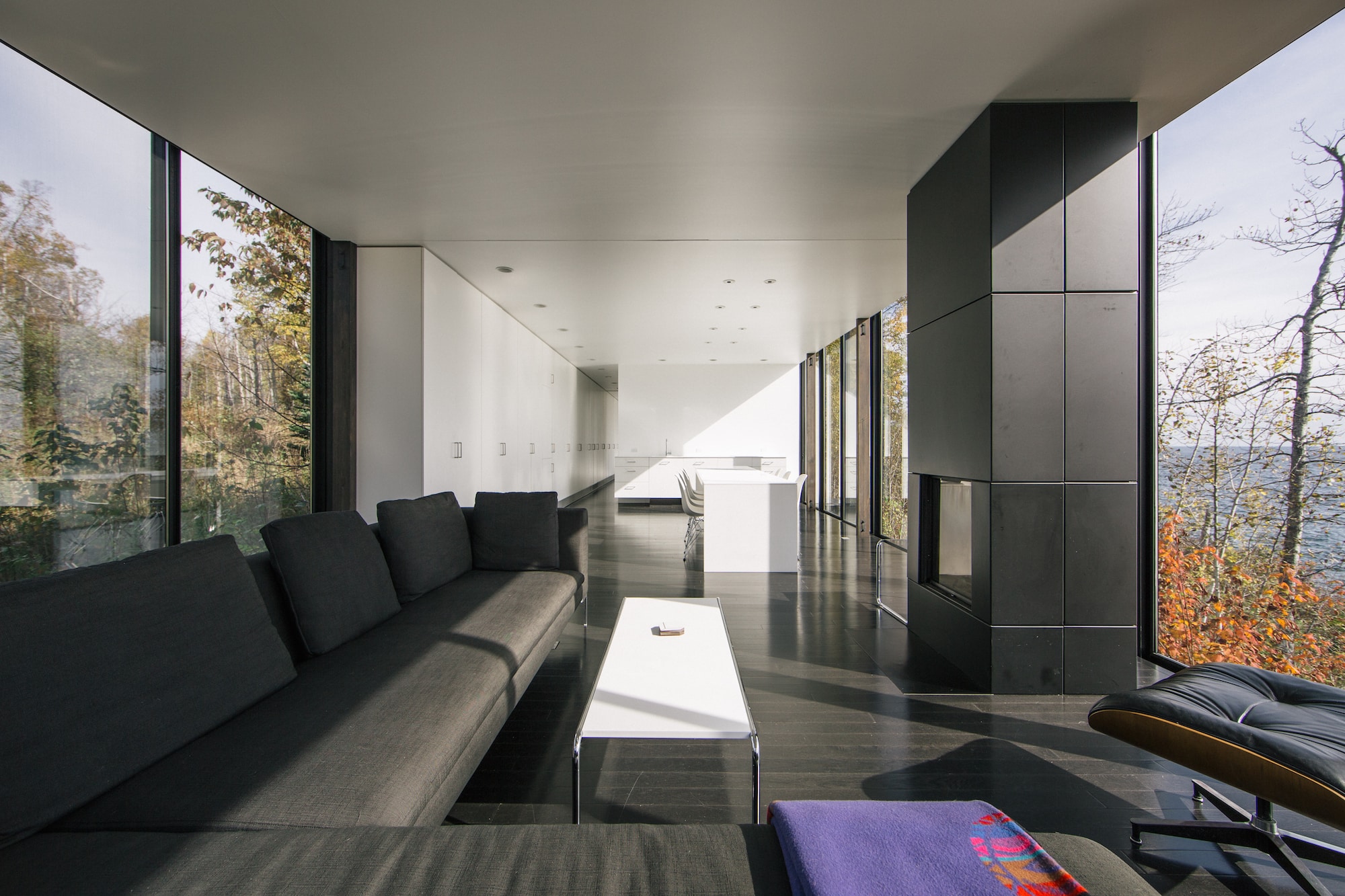 The Minnesota glass house by Julie Snow that spawned the idea for Plans Matter. Photo courtesy of Plans Matter

This is the crystalline cabin that gave birth to the idea for the website. Julie Snow of Snow Kreilich Architects designed this award-winning house for herself, so that “all of its activities would relate to the infinite spatial presence of the lake.” A sojourn in this cabin provides an opportunity to experience unspoiled nature while dwelling amid furnishings by such modern masters as Marcel Breuer, Harry Bertoia, and Charles and Ray Eames. 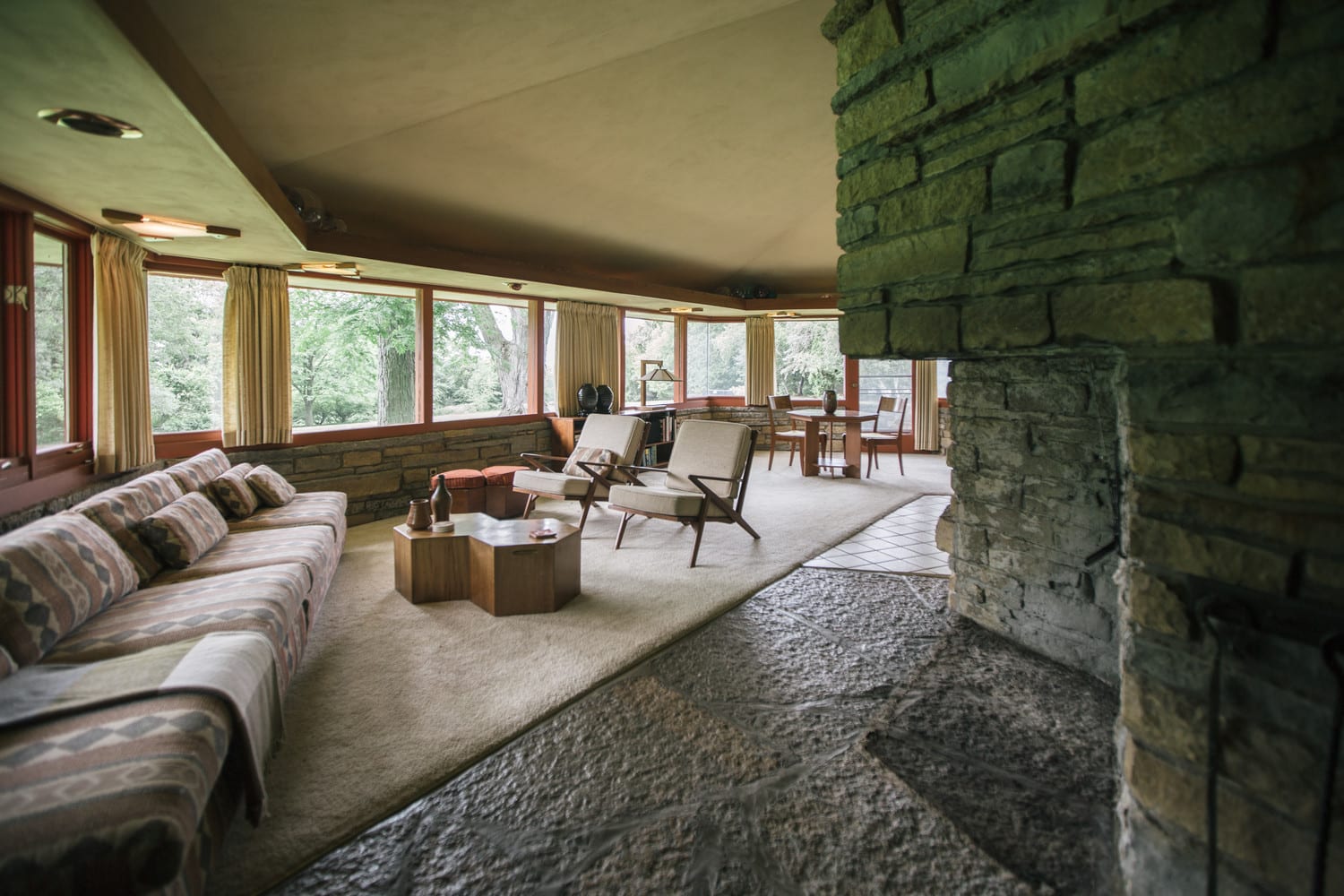 Plans Matter offers seven Frank Lloyd Wright houses to experience, including the 1915 Emil Bach house in Chicago, a famous example of his late Prairie Style. But the house that is most spatially exciting may be this stone and wood structure built in 1953 for Patrick Kinney and his wife and daughter.

A Wisconsin attorney, Kinney became so passionate about having a Wright house, he not only supervised its construction, but before he went off to work every morning, he drove to a local quarry in his Chevy truck to dynamite, cut, load and deliver limestone slabs to the building site.

Neighborhood children referred to the home as “the spaceship.” It certainly does look extraterrestrial with its double-hexagon central core, encompassing the living room, dining room, kitchen and master suite. 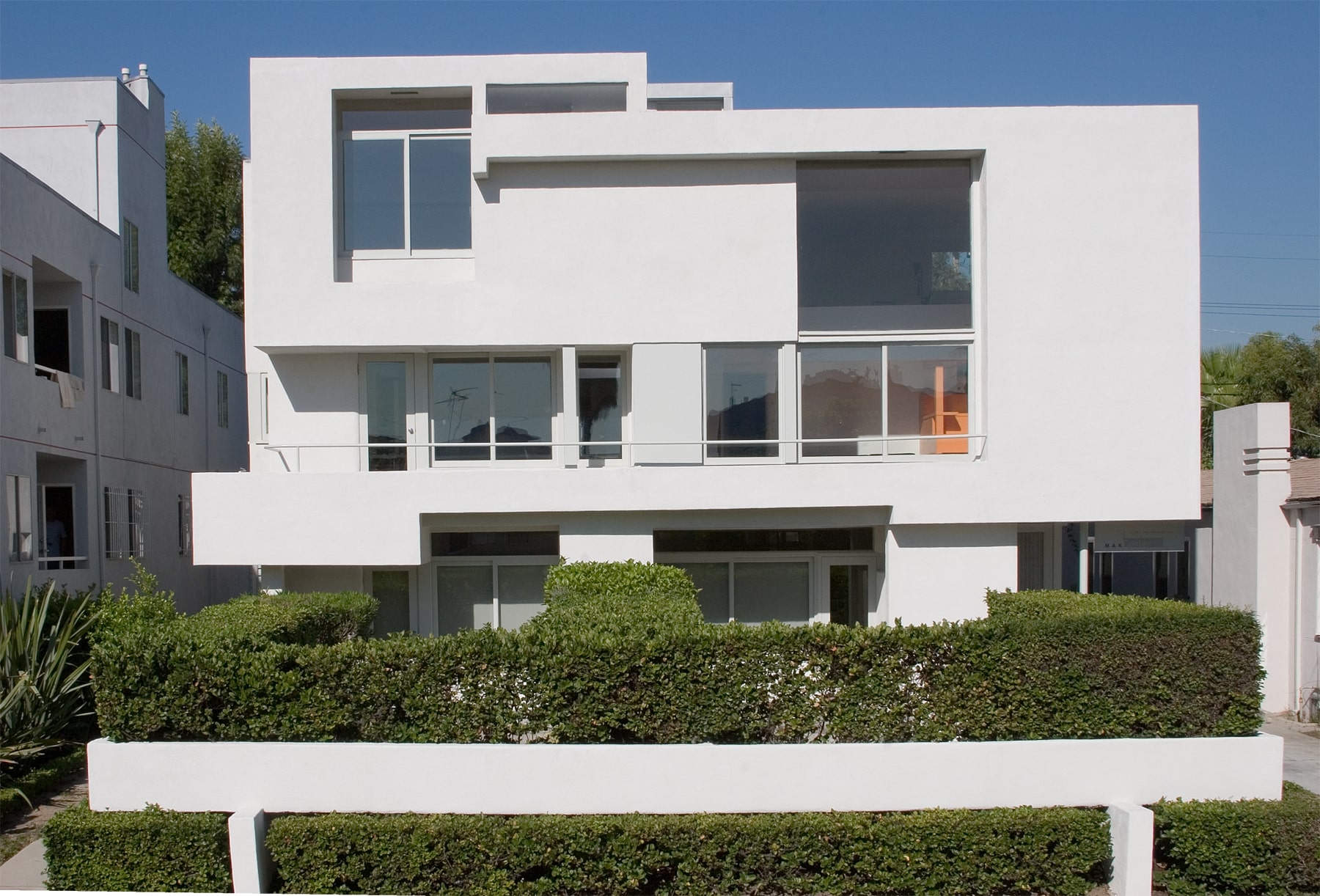 Designed in 1939, Rudolph Schindler’s Mackey Apartments were decades ahead of their time. Photo by Joshua White / © MAK Center

Few people know that the Vienna-born architect Rudolph Schindler, moved to the United States in 1914 in the hopes of working with Frank Lloyd Wright, so inspired was he by Wright’s new vision of architecture. He eventually ended up in Los Angeles as Wright’s architectural factotum to supervise the building of the Barnsdall House.

Not long after, he went solo, realizing his own wildly original visions of the modern house, informed by the Southern California landscape, the pioneering spirit of his clients and new construction methods. Schindler’s 1939 Mackey Apartments included three rental units, and a two-story penthouse suite for his client, Pearl M. Mackey.

Each apartment is distinct, although all share inventive compact layouts, a clever use of natural light, built-in furniture, ceilings of variable height and private outdoor spaces. In 1995, the building was acquired and renovated by the MAK Center for Art and Architecture in Vienna to host its artists and architects residency program. But the penthouse is available for all architecture lovers to rent. 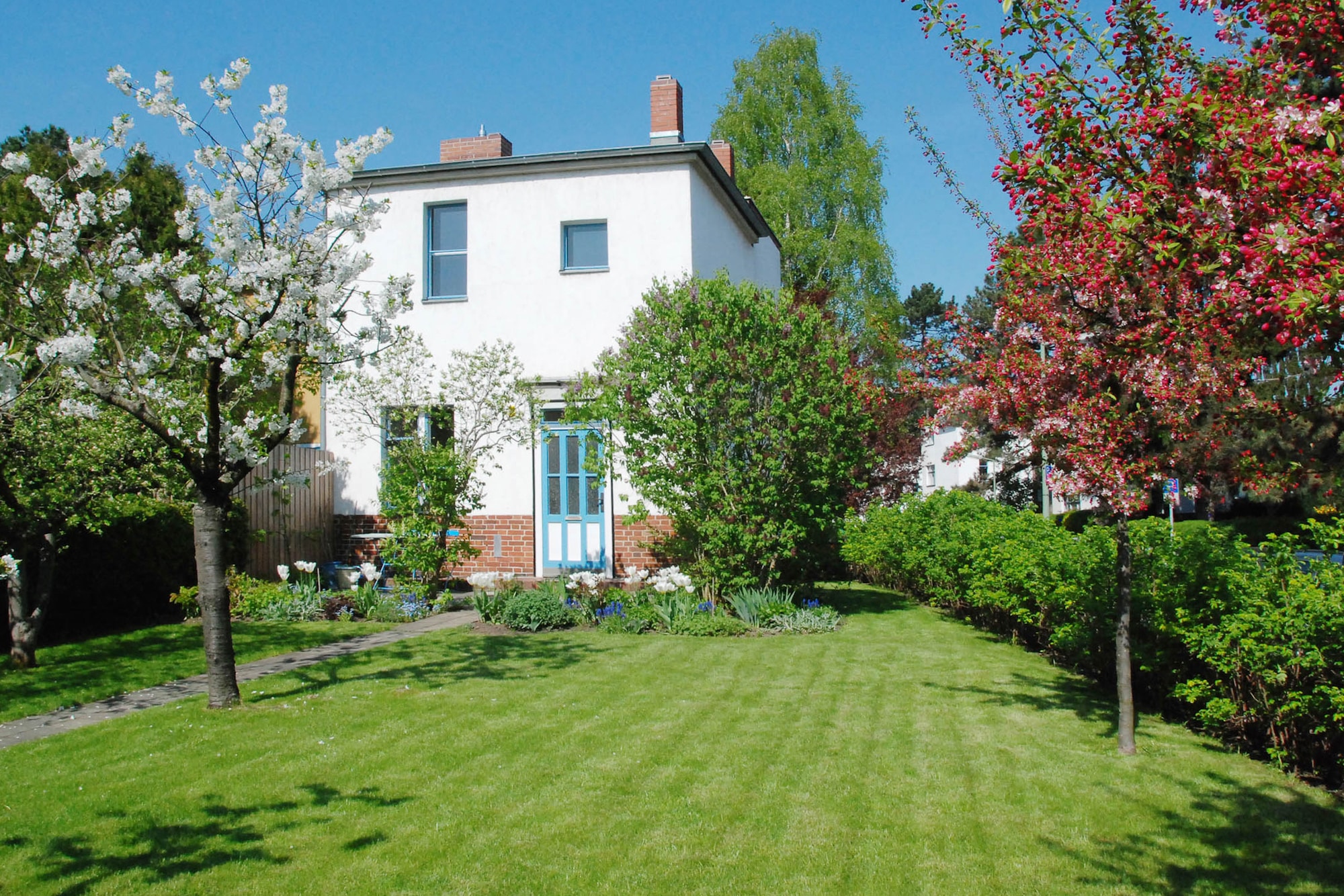 The modest but highly refined Berlin home of Bruno Taut, one of the early masters of modernism. Photo by Taut Heim, courtesy of Plans Matter

Bruno Taut was a visionary and highly influential architect of the Weimar period, as well as a painter, who designed four landmark garden city–style housing complexes in Berlin, which he adorned with brilliant, often discordant color combinations. At the opening of the groundbreaking Weissenhof Estate exhibition in Stuttgart, which launched the International Style in 1927, Le Corbusier was so shocked by Taut’s colorful structure that he exclaimed “My God, Taut is color blind!”

Taut’s own Berlin house, part of his Horseshoe Housing Estate may be tiny, but it shows him to be a great master at manipulating tone and hue to affect the experience of space. When it was for sale a few years ago, Katrin Lesser and Ben Buschfeld, a married landscape architect and graphic designer, who live in the complex, went to see the home and were so moved that they tried to raise public funds to renovate it and turn it into a museum.

When they failed to get the funding, they bought it themselves, restored it and turned it into a “rentable museum” — such was their passion. The house has since been granted the European Union Prize for Cultural Heritage and the Berlin Monument Award. Stay here when visiting Berlin, and you will be helping fund the preservation of an early modernist treasure. 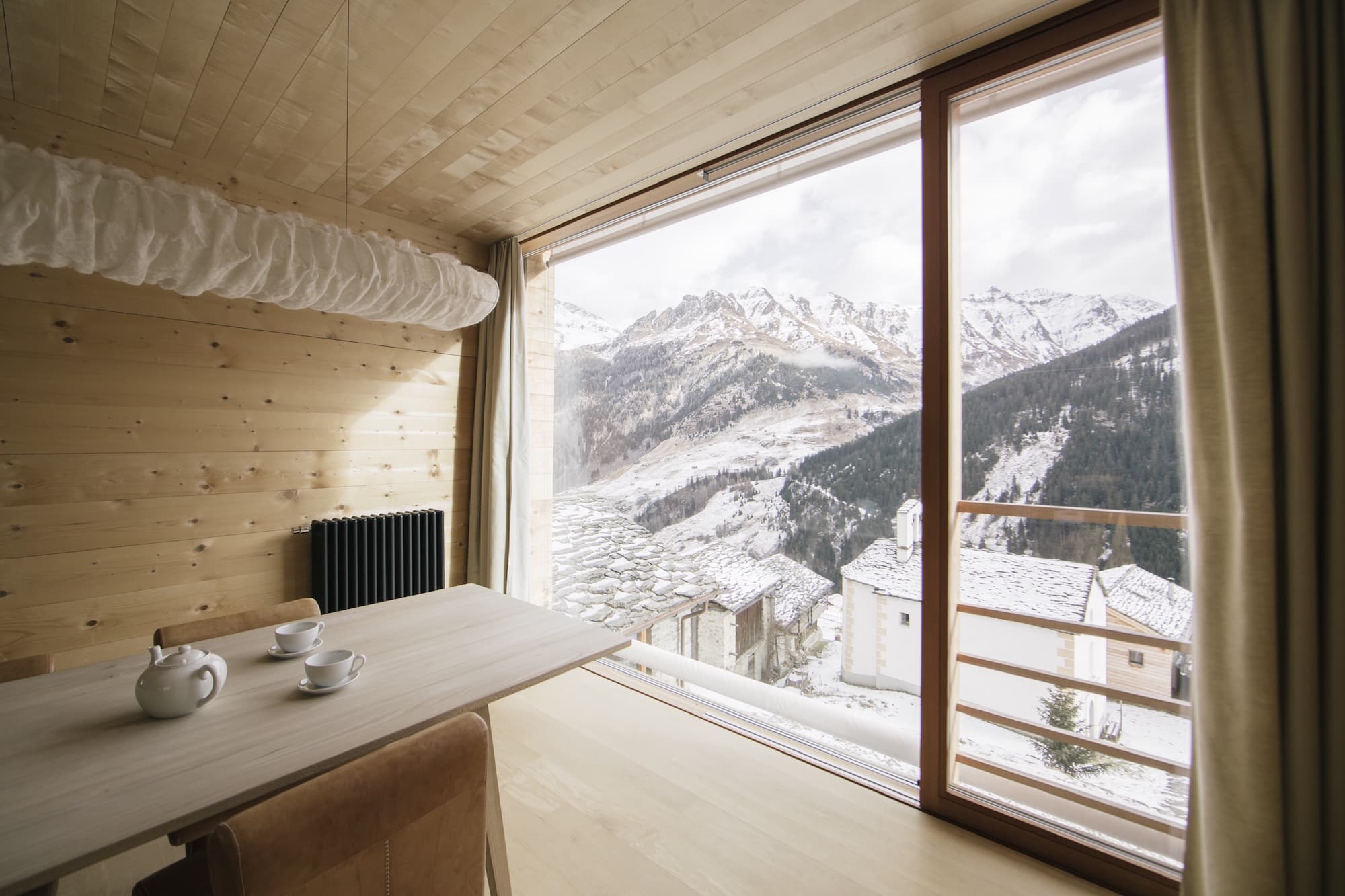 Peter Zumthor is among the grizzled gods in the pantheon of contemporary architecture. Worshippers of his expressive minimalism make hedonistic pilgrimages to the thermal spa he designed in Vals, Switzerland, as pristine and picturesque a Helvetian valley as there exists.

Few Zumthor fans know that it’s possible to stay in one of two solid-wood holiday houses he designed in the nearby village of Leis — there’s also another he built for himself. As one would expect from someone with as refined design sensibilities as Zumthor, the house is furnished, though sparsely, with pieces by Rodolfo Dordoni, Antonio Citterio, Warren Platner, Eero Saarinen and the great man himself. 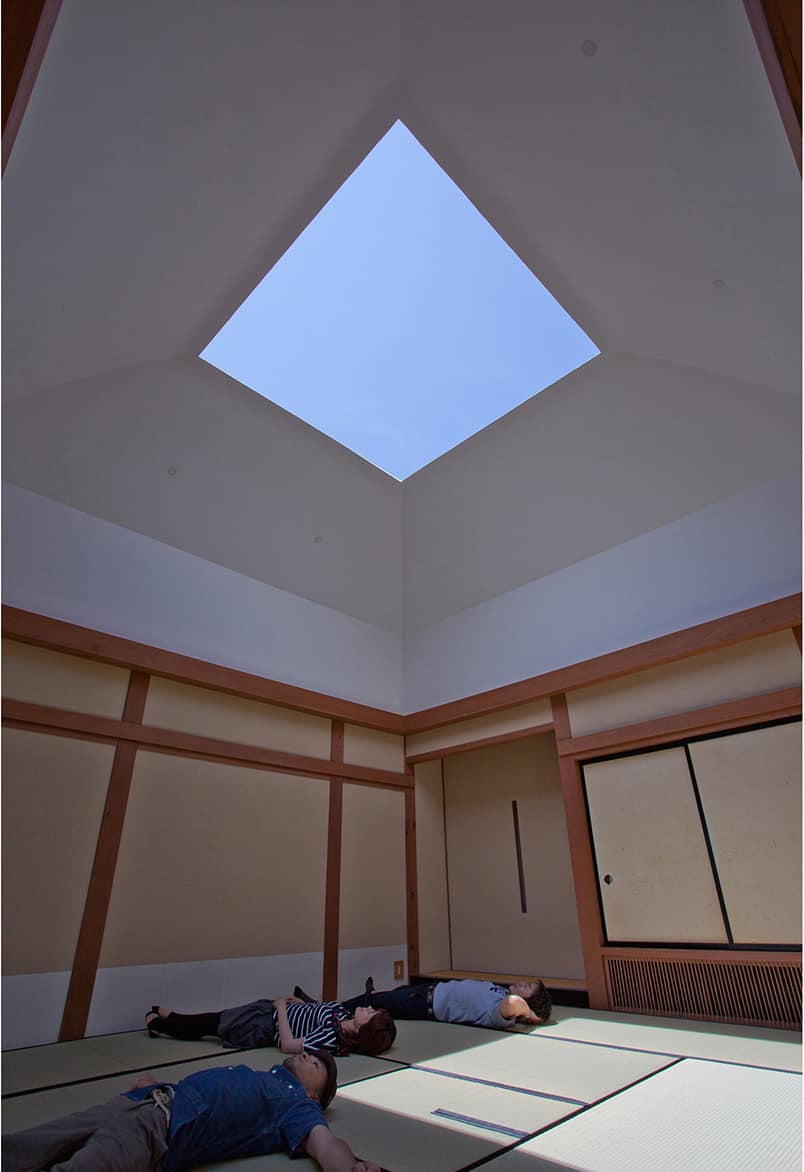 In this James Turrell room at House of Light, when the sliding roof is opened, the changing illumination and colors of the sky can be experienced in a meditative manner. Photo by Tsutomu Yamada, courtesy of Plans Matter

Fram Kitagawa is the Japanese curator and educator who masterminded the epic Echigo-Tsumari Art Triennial, in northern Japan in 2000. As part of that festival, he commissioned James Turrell, the wizard of light and perception, to conceive a guest house based upon Junichiro Tanizaki’s In Praise of Shadows, a formative 1933 classic on Japanese aesthetics, in which the differences between Japan and the West are explored through their relationships to light and shadow.

Turrell describes his House of Light as his attempt “to contrast as well as to incorporate day and night, the Eastern and the Western, tradition and modern.” Rare are the experiences where poetry becomes tangible; this is one of them. At Echigo-Tsumari, Kitagawa also offers Marina Abramovic’s Dream House and Junichi Kurakake’s Shedding House. Those are listed on Plans Matter, as well. 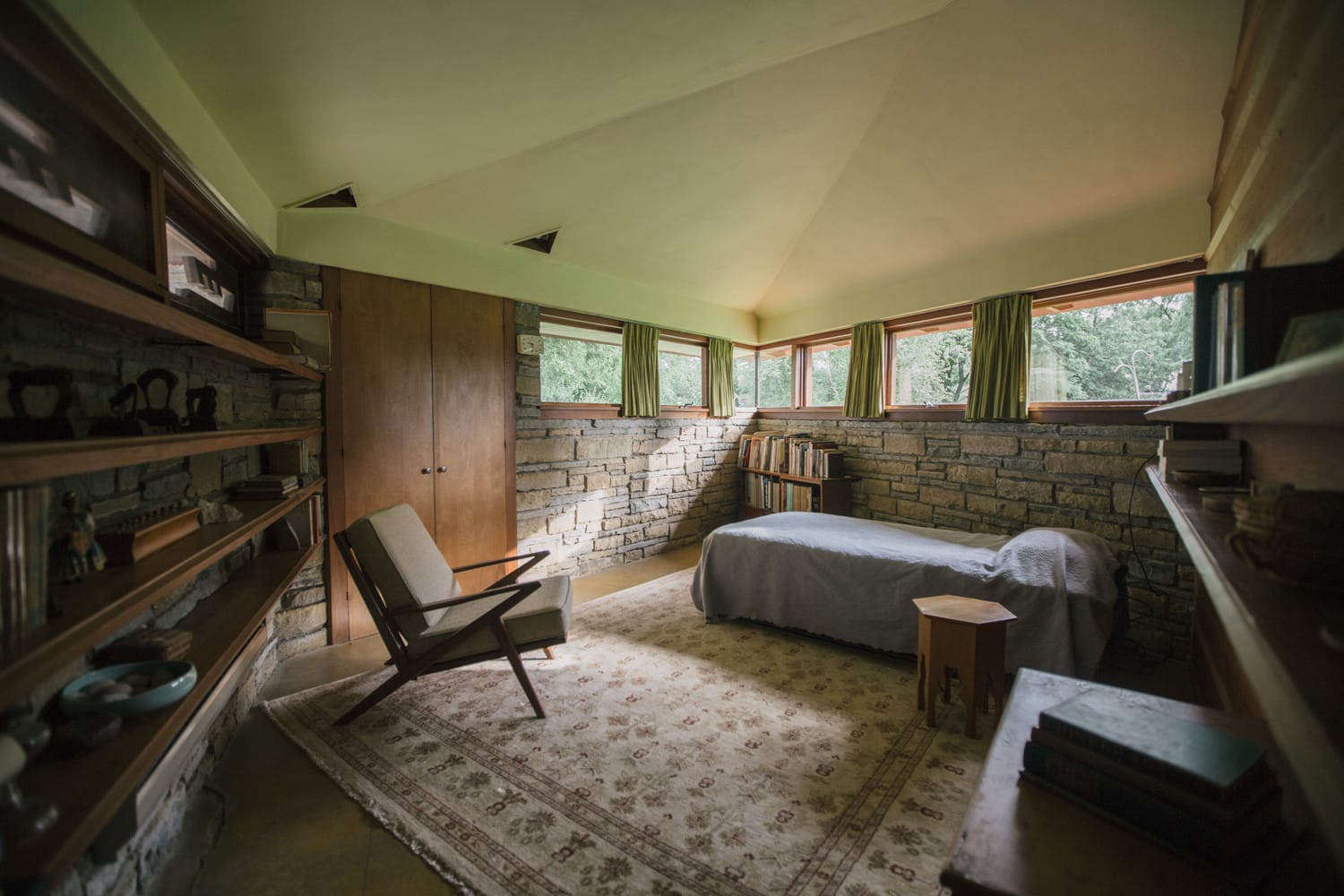