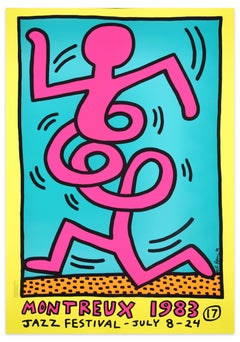 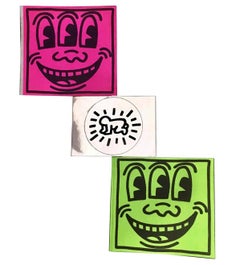 H 12 in. W 12 in.
Lucky Strike It's Toasted - Keith Haring - Screen Print - 1987
By Keith Haring
Located in Roma, IT
Lucky Strikes is a beautiful color serigraph on thin paper realized by the Pop Art master Keith Haring (Reading, 1958 - New York, 1990). Signed and dated on the plate on the lower r...
Category

H 18.9 in. W 13.19 in. D 0.08 in.
Rare Keith Haring Vinyl Record Art (Sealed)
By Keith Haring
Located in NEW YORK, NY
“A Diamond Hidden in the Mouth of a Corpse,” A Rare Highly Sought After 1985 Vinyl Art Cover featuring Original Artwork by Keith Haring; new/sealed in its original packaging. In a...
Category

H 47 in. W 33 in.
Keith Haring at The Pinnacle, Chicago
By Keith Haring
Located in NEW YORK, NY
Keith Haring produced this flyer for a large scale public mural project in conjunction with the Chicago Public School system in 1989. An extremely rare Haring collectible that would ...
Category

H 11.75 in. W 11.75 in. D 0.01 in.
Montreux Jazz Festival 1983 - Keith Haring - Screen Print - Contemporary
By Keith Haring
Located in Roma, IT
Montreux 1983 is an amazing color serigraph on thin paper made by the Pop Art master Keith Haring. Signed and dated on plate on the lower right margin. Printed by Albin Uldry as the...
Category

Keith Haring On Sale For Sale on 1stDibs

On 1stDibs, you can find the most appropriate keith haring on sale for your needs in our varied inventory. Find Contemporary versions now, or shop for Contemporary creations for a more modern example of these cherished works. When looking for the right keith haring on sale for your space, you can search on 1stDibs by color — popular works were created in bold and neutral palettes with elements of orange, black, beige and blue. These artworks were handmade with extraordinary care, with artists most often working in offset print, lithograph and screen print. A large keith haring on sale can be an attractive addition to some spaces, while smaller examples are available — approximately spanning 3.25 high and 2 wide — and may be better suited to a more modest living area.

How Much is a Keith Haring On Sale?