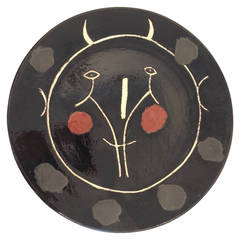 Find the exact visage noir picasso you’re shopping for in the variety available on 1stDibs. In our selection of items, you can find Abstract examples as well as a Post-War version. You’re likely to find the perfect visage noir picasso among the distinctive items we have available, which includes versions made as long ago as the 20th Century as well as those made as recently as the 20th Century. On 1stDibs, the right visage noir picasso is waiting for you and the choices span a range of colors that includes black, blue and gray. There have been many interesting visage noir picasso examples over the years, but those made by Pablo Picasso are often thought to be among the most thought-provoking. Artworks like these of any era or style can make for thoughtful decor in any space, but a selection from our variety of those made in ceramic, earthenware and glaze can add an especially memorable touch.

How Much is a Visage Noir Picasso?

A visage noir picasso can differ in price owing to various characteristics — the average selling price for items in our inventory is $11,000, while the lowest priced sells for $10,000 and the highest can go for as much as $90,514.