Largely a painter known for his busy, Impressionistic scenes of life on the streets of Paris, Abel Warshawsky spent about 30 years in France. He mastered two styles: his own variant of French impressionism and a striking realism, which he applied to his many penetrating and superb portraits. While his street scenes are modern in their depiction of boisterous, fleeting contemporary activity, the portraits embody the spirit of Old Europe. Their sincerity and integrity have a counterpart in the portraits of Charles W. Hawthorne, the great teacher of Provincetown.

Warshawsky, born in Pennsylvania and was raised in Cleveland. He began his studies at the Cleveland Art Institute under Frederick Carl Gottwald. Then the artist went to the Art Students League and the National Academy of Design in New York: as teachers he listed H. Siddons Mowbray, Louis Loeb, and Winslow Homer.

Like many twentieth-century impressionists, Warshawsky maintained the impressionist's favorite subject matter, urban life, but later abandoned the closely juxtaposed, regular brushstrokes for broad areas of color. His bird's-eye views of the boulevards of Paris recall Monet's famous Boulevard des Capucines, complete with "tongue-lickings" to represent pedestrians, and some of his works are highly impressionistic. Washer Women at Goyen is especially stunning with its limited palette of green and violet, its expressive use of controlled impasto, the delicate surfaces of the building, rendered all in violet, and the freely painted ripples of water below.

Warshawsky's The Memories of an American Impressionist, written in 1931, describes an American artist's life in Paris, ca. 1909 to 1930. His preferred hangout was the Café du Dôme on the boulevard Montparnasse, where "meeting one's fellow craftsmen — talking shop, and exchanging ideas in general — was the main diversionAt the Dôme, Warshawsky met Richard Emil Miller, Lionel Walden, Max Bohm, Frederick Frieseke, Lawton Parker, Louis Ritman, the modernists Alfred Maurer, John Marin, Jules Pascin and Signac: in short, more than a handful of expatriates who made the Café du Dôme their lively art club, intellectual hub, and social center.

Warshawsky painted at Vernon, not far from Giverny; the accommodations were cheaper than those at Giverny.. Later he was joined by Leon Kroll, Ivan Olinsky, and Samuel Halpert. During the war years, Warshawsky volunteered to manage a labor squad at a supply warehouse. Warshawsky packed all of the 1920s into the last chapter. The relentless heat of the Midwest, lingering "Victorian" dress codes, and Prohibition drove Warshawsky back to France, where he was made a chevalier of the Légion d'Honneur. For a while, he was involved with the artists' colony on the Spanish island of Mallorca. The events of the second world war made it necessary for Warshawsky to return to the States; he settled on the Monterey Peninsula and was active in the Carmel Art Association. The artist died in Monterey on 31 May 1962. 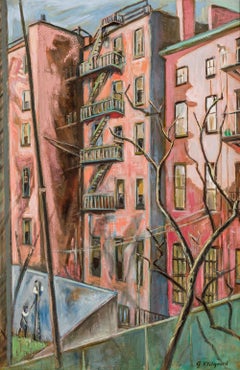 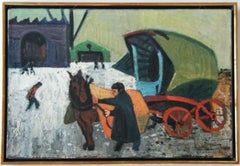