Known as one of the early American Impressionists, artist Reynolds Beal was born in 1867 and studied at Cornell from 1885–89 with a focus on naval architecture. His formal art training would come later as he studied under William Merritt Chase at Chase's school in Shinnecock, Long Island, in 1896.

Beal's love of yachting resulted in paintings of maritime scenes from Rockport to the Hudson, as well as the Caribbean, from his own sailing boat that doubled as his studio. His first solo exhibition took place at the Clauson Gallery in New York City in 1905. In 1917 he was a founding member of the Society of Independent Artists. Beal was one of the few Americans chosen to have their work exhibited at the Luxembourg Museum in Paris in 1919.

Beal was a member of the Salmagundi Club, the American Watercolor Society, the Society of American Engravers, the National Arts Club and was elected an associate member of the National Academy of Design. He also founded the New Society of Artists, which consisted of 50 of the most influential painters of that time, among them, Childe Hassam, Maurice Prendergast, George Bellows and William Glackens.

Oyster Bay Boats in a Squall
By Reynolds Beal
Located in Los Angeles, CA
A Post-impressionist seascape depicting fishing boats in a squall. Signed and dated lower right. The work was exhibited at the Parrish Art Museum in Southampton, N.Y. Listed on page ...
Category

Mango Trees, Rio Piedras, Puerto Rico
By Reynolds Beal
Located in Saratoga Springs, NY
Signed lower left and dated 1921. About the artist: From an affluent and artistic family, Reynolds Beal and his younger brother Gifford both made careers in art. Beal was born in ...
Category

Caribbean Island [untitled].
By Reynolds Beal
Located in New York, NY
The location of this early oil pastel drawing was identified by other pieces from the same drawing book. The oil pastel was a new invention - just on the market in 1921 and it appea...
Category 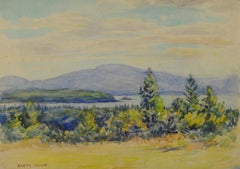 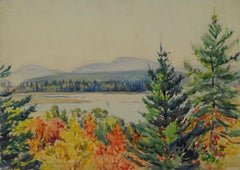 untitled (The White Barn with Farmers and Horse)
By William Grauer
Located in Fairlawn, OH
Category

William Grauer
untitled (The White Barn with Farmers and Horse)

Breaking Up of the Penelope
By Edward Dobrotka
Located in Fairlawn, OH
Category

Edward Dobrotka
Breaking Up of the Penelope, 1942

Previously Available Items
Easter Week Carnival , Puerto Rico
By Reynolds Beal
Located in Los Angeles, CA
Reynolds Beal, born on October 11, 1867 in New York City, was both a painter and an etcher. He was a man of independent means, and was thus able to devote his life to his art withou...
Category

H 17 in. W 21 in. D 2 in.
Light House of Port Morris, 1888. North Brother Island.
By Reynolds Beal
Located in New York, NY
This unsigned drawing by Reynolds Beal was made in 1888. He noted details of the place, "There was a fine pear tree just to the left of the lighthouse" which included the title. Pap...
Category