What defines “fine” jewelry? For many aficionados, there’s a clear line separating the golden wheat from the gilded chaff. But the handcrafted pieces made by Ciner, a 128-year-old costume jewelry house with a glittering past to rival some of the hautest high jewelers, call into question our notions of what constitutes preciousness.

Quality? Craftsmanship? Painstaking detail? Vintage Ciner earrings, brooches, necklaces and other accessories have them all in spades.

Much of the Ciner’s allure can be traced to its origins in fine jewelry. Emanuel Ciner, an Austrian immigrant, founded the firm in Manhattan in 1892, crafting pieces from the traditional precious gems, gold and platinum. But World War I and the Great Depression caused purse strings to tighten and materials to become scarce. Rather than try to weather the economic downturn, which shuttered many other American jewelers, Ciner made the risky transition from fine jewelry to costume (or fashion) jewelry — virtually uncharted territory.

Emanuel Ciner’s sons, Irwin and Charles, introduced an array of innovations — rubber casting molds, which are especially durable and produce higher quality results, and white metal alloys, which affordably mimic the look of more precious materials — that would become the standard for costume jewelry. During World War II, Ciner’s advanced molding technology was utilized by the U.S. military to produce munitions and tools. This arrangement gave the firm access to the heavily rationed metals it needed for its jewels, enabling it again to endure conditions that drove others into bankruptcy.

The company hit its stride in the 1960s, when its jewelry was sold at some of the country’s toniest stores, even garnering an Andy Warhol–illustrated ad for Bonwit Teller. Its pieces were worn by the era’s brightest stars. In the famous 1957 Joe Shere photo of Sophia Loren sneering at Jayne Mansfield’s décolletage, Mansfield is resplendent in shoulder-grazing Ciner earrings.

Ciner is unique among costume jewelers in that its pieces aren’t imitations — they are coveted in their own right. Elizabeth Taylor, a voracious jewelry collector with a taste for the very finest, was a longtime client. Several suites of Ciner jewels were included in the 2011 Christie’s sale of Taylor’s collection, with one group of rhinestone-studded ear clips and a bracelet fetching $15,600 — more than 100 times the auction estimate. It’s a reminder of a time, not so long ago, when women of great style wore fine and costume jewelry with equal aplomb, often at the same time.

Today, Ciner — now run by Emanuel Ciner’s granddaughter Pat Ciner Hill and great-granddaughter Jean Hill — continues to adhere to the same exacting production specifications. It is the only jewelry house in New York, and likely the United States, that manufactures all its pieces entirely in-house. Each begins with dozens of elements that are cast in rubber molds and then individually filed and polished, plated in a particularly thick layer of 18-karat gold or rhodium, assembled on the bench and painted with enamel or set with stones. Every step is performed by hand by craftsmen, many of whom have been with the company for more than 30 years.

Free Shipping
Vintage Ciner Gold Plated Earrings With Colorful Crystals
By Ciner
Located in Portland, OR
These are stunning vintage 1980's Ciner gold plate clip on earrings! These beauties are set with three crystal stones in pretty shades of soft amber, black, and smokey gray that are ...
Category

Free Shipping
Vintage CINER earrings
By Ciner
Located in BÈGLES, FR
They are absolutely sublime, in immaculate condition, in glass and pearl Gripoix Golden metal, they are highly marvellous. Collectable I am a partner with French experts group , rec...
Category

Free Shipping
Ciner Swarovski Brooch Pendant black & Red, New Never worn 1990s
By Ciner
Located in Wallkill, NY
This is both a brooch and a pendant. Has Red and what looks to be black Swarovski Crystals as well as deep red cabochons. Clear Crystals as well. It has a hook on the back to use as ...
Category

Free Shipping
Ciner Brooch Swarovski Crystal Floral AMBER Gold NEW Never worn 1990s
By Ciner
Located in Wallkill, NY
Another piece of Stunning Ciner. Amber Swarovski Crystal in the center of a floral brooch. Measuring 2.44 in w x 2.16 in top to bottom. There is a nub that has a factory defect on it...
Category

Free Shipping
Palm Springs Fashionista Curated Vintage Earring Collection 1950s-200 #22/100
By Ciner
Located in Palm Springs, CA
We have collected vintage costume jewelry earrings since the 80’s. One by one we have curated a lovely collection of unbranded and designer earrings. Made from the 1950s to 2000. Eac...
Category

Free Shipping
Ciner 1970s Panther Knocker Necklace
By Ciner
Located in Scottsdale, AZ
Spice up your necklace game with this amazing Ciner choker necklace handmade in NYC, Circa 1970s. This Ciner gold plated link necklace is finished in a black enamel and features a de...
Category

Free Shipping
Vintage Ciner Faux Topaz Black and Rhinestone Square Earrings
By Ciner
Located in Portland, OR
This is a gorgeous vintage pair of Ciner earrings in a gold plated metal with black enamel and rhinestones. There is a beautiful center faceted faux topaz crystal and the earrings ha...
Category

Free Shipping
Ciner Starburst Brooch Pin Gold Metal Rhinestones Mid Century
By Ciner
Located in Port Saint Lucie, FL
Fabulous rhinestone-encrusted brooch by Ciner, likely made in the 1960s. Made from gold metal, the rhinestones are clustered at the center and dotted at the edges. A truly lovely a...
Category

Free Shipping
Cornelian, brown and grey paste cabuchon 'cluster' earrings, Ciner, USA, 1980s
By Ciner
Located in Greyabbey, County Down
With subtle and muted colours, matt and cut stones, these earrings are smart and simple to wear, matching simple white or picking out the colours of the earrings, autumnal and summer...
Category

Free Shipping
Ciner Basketweave Gold Gilt Bracelet, Never Worn 1990s
By Ciner
Located in Wallkill, NY
1990s Ciner Bracelet. Measuring .83 inches wide x 7.25 inches long. It will fit a 6.5 - 7 inch wrist nicely. We have many more Ciner pieces on our storefront. This is out of a massi...
Category

1stDibs offers a range of Ciner jewelry and watches. Each of these unique items has been designed with extraordinary care, often using gold. While searching for the most stylish antique or vintage Ciner jewelry to pair with your ensemble, you’ll find that Ciner crystal jewelry & watches can add a particularly distinctive touch to your look, from our inventory of 25. This collection contains 313 pieces as well as a number of other designs by this jeweler. Contemporary and modern are among the most popular styles of Ciner watches and jewelry available on 1stDibs. While this collection reflects work that originated over various time periods, most of these items were designed during the 21st Century and Contemporary. Many customers also consider jewelry & watches by Verdura, Paloma Picasso for Tiffany & Co. and Christina Addison. Prices for Ciner watches and jewelry can vary depending upon gemstone, time period and other attributes. 1stDibs's price starts at $75 and tops out at $1,650, while pieces like these can sell for $404. 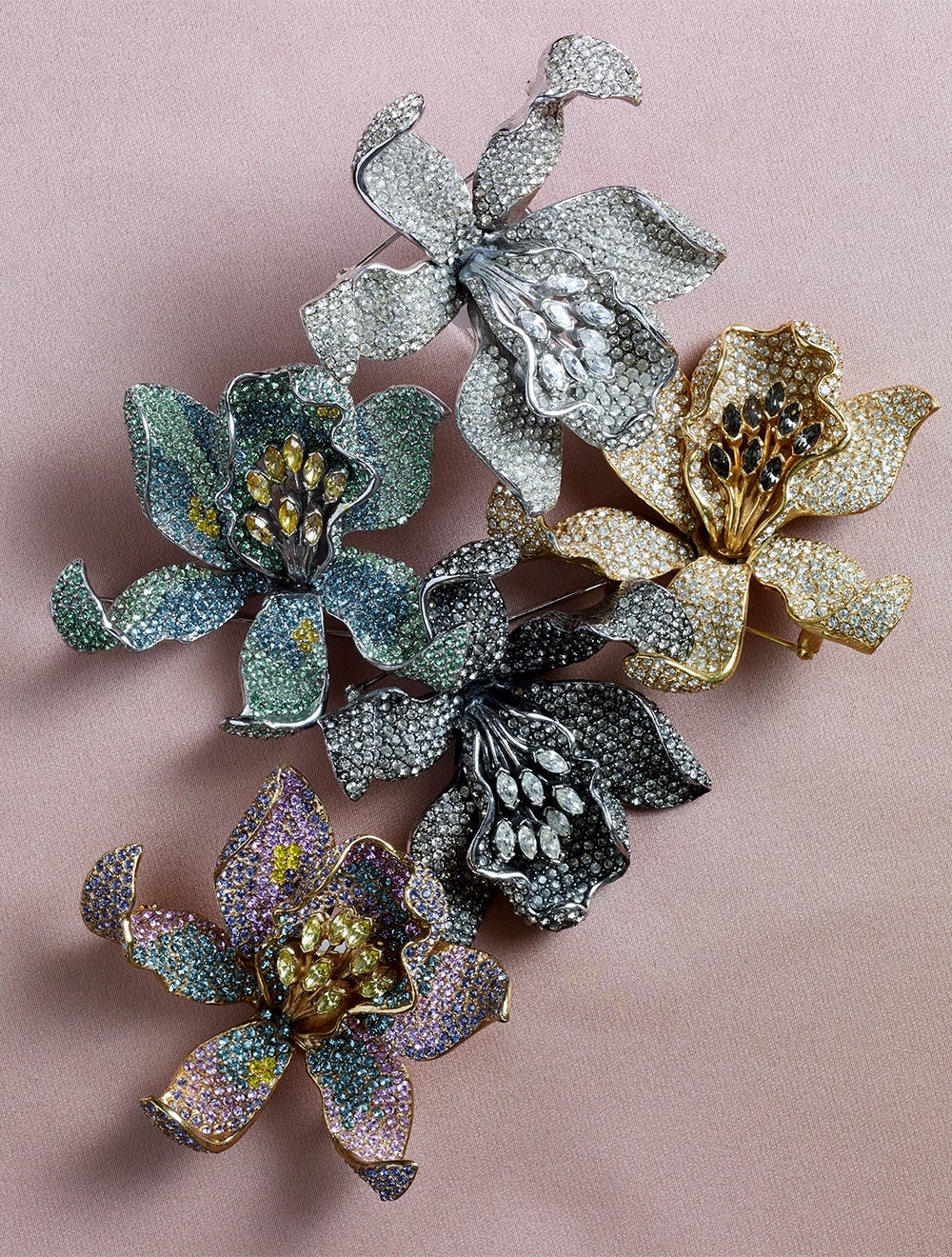 Together, the designer and tastemaker and the 128-year-old company have created a nature-inspired collection whose proceeds will benefit animal shelters.