When Elizabeth Taylor struck a pose on the Rome set of Cleopatra in 1962 wearing capri pants and a sleeveless top along with her new Bulgari Serpenti gold and diamond bracelet, she became the first in a long list of celebrities to sport one of the Italian jeweler’s stylish snakes.

The legendary fashion editor Diana Vreeland frequently flaunted her 30-inch-long gold and white-enamel Bulgari snake belt, although, rather than encircling her upper waist with it, as the piece was designed to be worn, the iconoclast wrapped it twice around her neck.

Vreeland was such a fan of the house’s sinuous reptiles that she studded the pages of Vogue with them when she was editor in chief there, from 1963 to 1971. One of the most striking appearances was in a September 1968 article featuring a photo by Gian Paolo Barbieri of model Benedetta Barzini adorned with Bulgari enamel and gold snake necklaces and bracelets in her hair and around her neck and shoulders.

Bulgari’s snakes are part of a tradition of ophidian jewelry that dates back to ancient times. Classical Greek jewels employed serpentine motifs to symbolize concepts as diverse as wisdom, beauty, protection, strength and eternal love.

At Bulgari, snakes are viewed as a link to the Hellenic heritage of Sotirio Bulgari, who founded the house in Rome in 1884. Over the years, the Serpenti collection has showed off the brand’s envelope-pushing styles.

The first snake jewels emerge in the Bulgari archives in the 1940s: coiled gold Tubogas bracelets representing the body, with a watch for the head. Initially, the house collaborated on the timepieces with Swiss companies like Vacheron Constantin and Jaeger LeCoultre.

In these early examples, the name of the watchmaker appears on the dial together with Bulgari. By the late 1970s, the jeweler had started fabricating its own watches and its name appears alone on the dial.

Bulgari began making bold coiled gold bracelets with gem-encrusted snake heads and tails like the one Elizabeth Taylor sported around 1950. In many of these, the snake’s head has hinged jaws that open to reveal a circular watch face.

The bodies are typically either tubogas or tubolare gold work. Tubogas, which means “gas pipe” in Italian, involves wrapping a gold strip with raised edges around a core of wood or copper.

It all links together without solder, and the core is removed or dissolved when it is complete. In tubolare goldwork, slender, tapered gold pentagons are hinged together to approximate the look of a snake’s scales.

The Bulgari enamel and gold snake bracelets and belts introduced in the mid-1960s and beloved by Vreeland came in a variety of vibrant hues. Some color patterns were based on those of actual serpent species, whose names were subtly engraved in Italian on the tails. The milk snake, for instance, was the model for a blue, red and black bracelet, which bears the inscription serpente del latte.

But the vast majority of the pieces have palettes associated more with fashion than with nature. One popular style, worn by model Benedetta Barzini in Vogue, sported a harlequin pattern of white and black enamel.

Bulgari has created snake jewels in countless variations over the years. The history of the house’s unofficial mascot is detailed in Bulgari: Serpenti Collection, written by yours truly in collaboration with the Bulgari Brand Heritage Department in Rome.

The book launched on Chinese New Year in 2013, which happened to be the year of the snake, at an opening party with an exhibition I curated at the firm’s flagship boutique in New York City. The event ushered in a surge of enthusiasm for vintage Bulgari Serpenti jewelry, along with new styles.

By my unofficial count, contemporary Bulgari Serpenti diamond snake necklaces and bracelets have made more appearances on the red carpet than any other high-jewelry style, adorning the necks and arms of Julianne Moore, Bella Hadid, Zoë Kravitz and Charlize Theron, to name just a few celebrity devotees. Interestingly, stars don’t seem to mind being seen in Serpenti jewels similar to those so many others have sported over the years.

Naomi Watts is even fine with donning one Bulgari serpent to multiple events. In 2015, when she was on the awards season circuit, she wore the same diamond snake necklace on several red carpets. While some fashion critics clucked at the repeat appearances, I thought the way she tossed on the jewel made it look like she owned it.

“Owned” in the sense that she was comfortable in the necklace, which was set with more than 77 carats of diamonds, and made it look as simple to wear as a pair of jeans. Her ease with the piece recalled Elizabeth Taylor’s nonchalance in slipping on her Serpenti on the set of Cleopatra. Their stylish casualness proves, as if more proof were needed, the eternal cool of Bulgari’s Serpenti jewels. 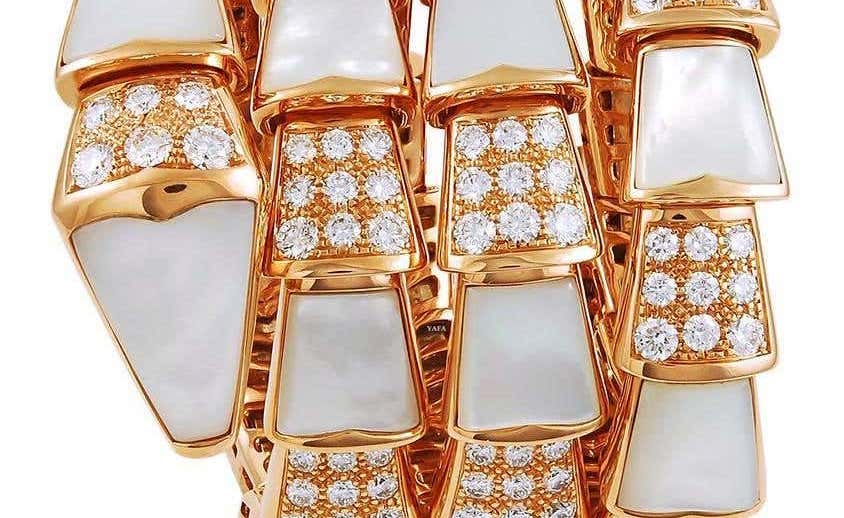