Stunning snake gems have slithered through jewelry history since ancient times. They reached their peak of popularity, however, in the Victorian era. Queen Victoria loved serpentine jewels, and she had even more power to shape trends than Kate Middleton and Meghan Markle do today.

The British monarch’s best-known piece in this mold is the gold coiled-snake engagement ring she received from Prince Albert around 1839 — the sinuous reptile was considered a symbol of everlasting love. The piece was set not with a diamond but an emerald, her birthstone, accenting the creature’s head.

This ring is customarily cited as the impetus behind the spread of snake-style pieces during the period. But Victoria’s jewel box contained many examples of the genre from before (and probably after) her engagement. In 1837, at her first council after acceding to the throne, she wore a bracelet composed of three intertwined snakes. The piece, according to authors Charlotte Gere and Judy Rudoen in their Jewellery in the Age of Queen Victoria, conveyed the message that she “aspired to the ‘wisdom of the serpent.’ ”

Snake jewels made during the Victorian era came in a vast array of styles. Here, we present several of the most popular, with the story behind the designs.

Enamel snake bracelets accented with gems are among the most vibrant styles of Victorian snake jewelry. They come in various colors and feature a variety of enameling techniques, including painting the enamel on for a matte effect and applying a translucent layer over metal that has been engraved with a design, known as guilloché.

The symbolism assigned snake jewelry during the 19th century derived from ancient mythology. Archeological digs at Pompeii, Troy and other sites brought myths involving serpents back into public consciousness. Aphrodite, the goddess of love, for example, was depicted wearing a bracelet in the form of a snake, symbolizing her seductive beauty. For Plato, the image of the Ouroboros, a serpent biting its tail, represented everlasting life. Alexander the Great, of Macedonia, and Roman Emperor Augustus were allegedly sired by divine serpents, seen as a source of power and wisdom.

Snakes’ association with everlasting love was underscored in necklaces featuring the reptile with a heart hanging from its mouth. These pieces, usually a bit longer than chokers, are generally made of slinky gold chain that is enameled or gem-set.

Turquoise was plentiful during the 19th century and among the most fashionable gems for everyday wear. The stone’s popularity, in fact, inspired Tiffany & Co. founder, Charles Lewis Tiffany, to choose its color for the cover the first Blue Book, a catalogue of the house’s jewels, in 1845; today, the hue is referred to as Tiffany Blue. Victorian jewelers used round turquoise cabochons to represent the scales of their snaky creations.

No images exist of Queen Victoria’s engagement ring, and its whereabouts are unknown, but it is usually described as one coiled serpent. It may, however, have been two, since that is the number intertwined in most Victorian gold snake rings, which typically have gems highlighting the head or eyes. Some glamorous rings from the period are composed of three snakes.

The snakes of Victorian brooches are often elegantly coiled into the figure-eight form of the infinity symbol. The motif derives from the ancient Ouroboros image of a snake eating its own tail. 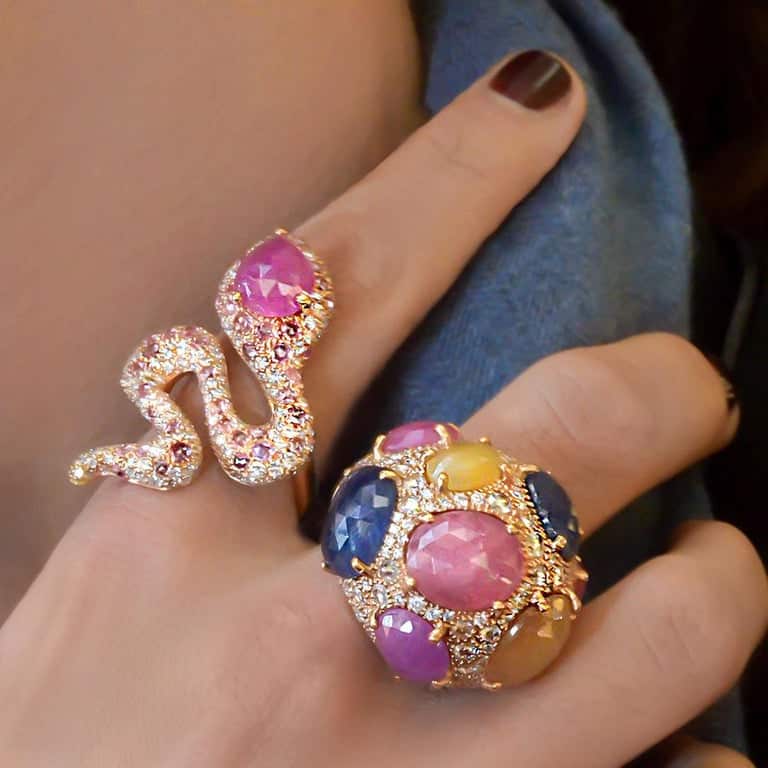