The reign of Queen Victoria encapsulates a quickly evolving period of history — and jewelry styles were no exception.
by 1stDibs Editors
Pin
Share
Tweet
Email 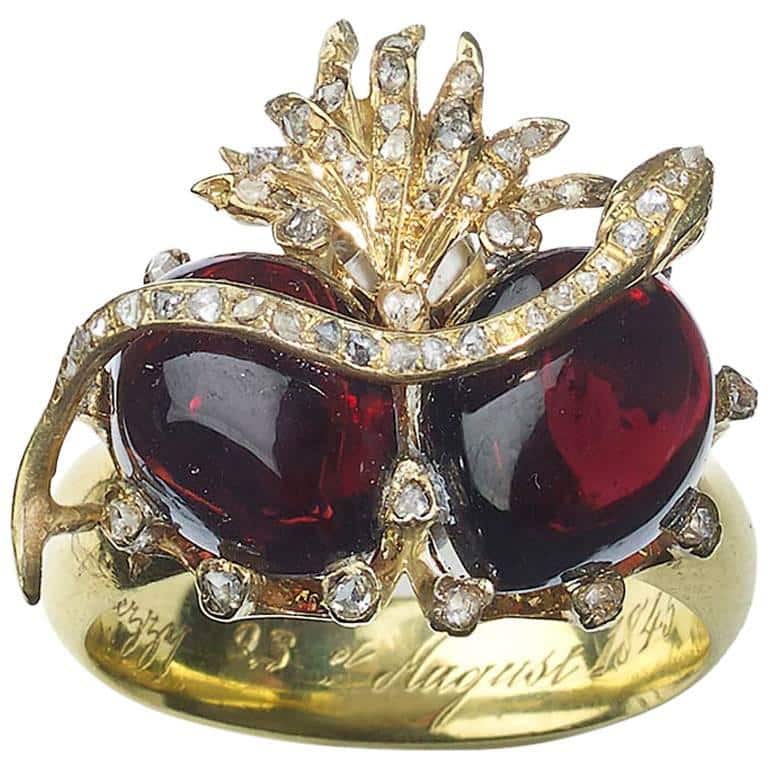 No single period has seen such a diverse group of jewelry attributed to it than the Victorian era. The jewelry is named after Queen Victoria, whose reign lasted from 1837 to 1901, making her the second longest-ruling monarch. (She was surpassed by Queen Elizabeth II in 2015.) During this time, different styles of fashion and jewelry came and went.

Thanks to our fascination with royalty and swoon-worthy melodramas like Netflix’s The Crown and the recent feature film Victoria & Abdul, we are all familiar her story. After the death of Victoria’s father and three childless uncles, she ascended to the throne at age 18. In 1840, Queen Victoria married the love of her life, her first cousin Prince Albert of Saxe-Coburg and Gotha.

There was no fairytale ending here, though, because in 1861 Albert died prematurely and Victoria went into mourning. This traumatic event changed the way the Queen’s public perceived her and in the way she presented herself. However, it is important to note that this was also a period of great transformation and prosperity for the British Empire.

Her 63-year reign has been divided by historians into the Romantic period, the early happy years, circa 1837–60; the Grand period, marked by the deaths of the Queen’s mother and husband, circa 1860–80; and the late Victorian or Aesthetic period, which lasted from about 1880 until 1901 and ushered in the Belle Epoque. Queen Victoria wore her heart on her sleeve, and her fashion and jewelry reflected her emotions. 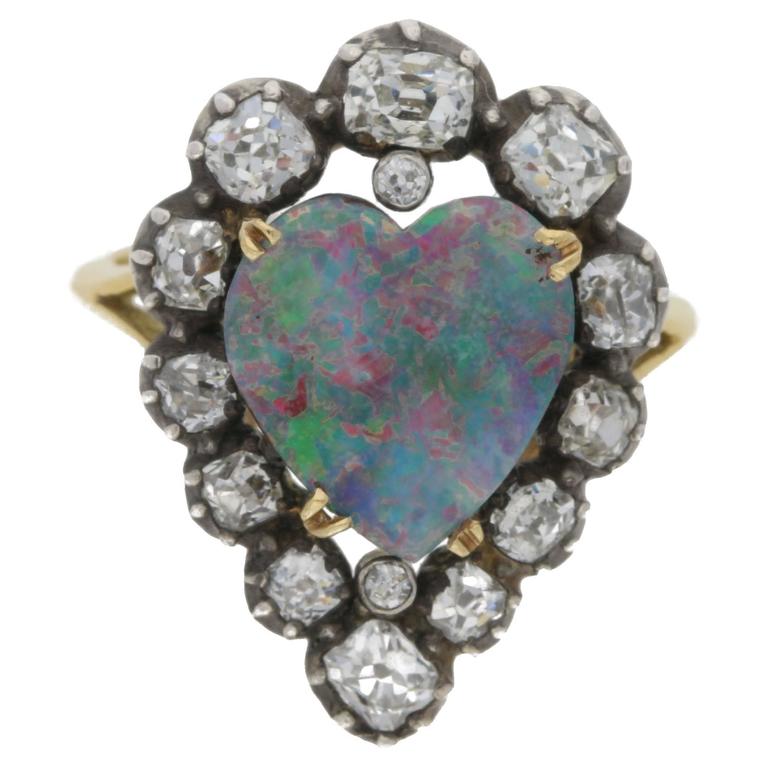 Romantic period jewelry was a celebration of the young monarch’s love. When Prince Albert became engaged to Queen Victoria, he gave her a serpent ring with emerald eyes, her birthstone. While this may seem a bit simple for our contemporary tastes, the serpent, symbolizes eternity, and has become a popular motif in jewelry. The tail in the serpent’s mouth forms an unbroken circle. This dewy-eyed happiness trickled down to the masses and men and women favored jewelry that was sentimental and full of symbolism. Today, Victorian jewelry is very coveted and highly collectible. 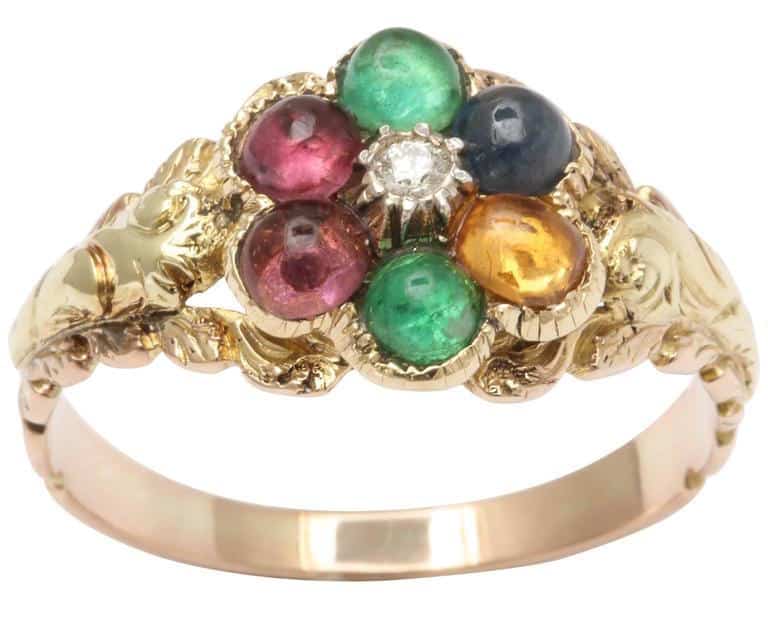 Jewelry from this time tends to be feminine and ornate. Flowers, hearts, birds, and bows were just some of the common decorative motifs. These pieces were embellished with seed pearls, coral and turquoise. It was common to express your devotion with jewelry — REGARD and DEAREST rings were particularly popular. These rings were set with stones that corresponded to each letter: Ruby, Emerald, Garnet, Amethyst, Ruby, Diamond.

Most often, the design of the ring was simple, with the stones going across the shank of the ring in a line, but it was not uncommon to see a REGARD ring in a flower formation, with each stone set in the petal of the flower. Another common ring style was two hands clasping a flower or stone. They came in many styles and were made of coral and ivory but also of gold with precious and semiprecious gemstones. These rings, while not exclusively Victorian, are often associated with time period and symbolized friendship. Lockets enclosed with hair, cameos depicting cupid or a loved one’s face and enamel pieces were also popular. 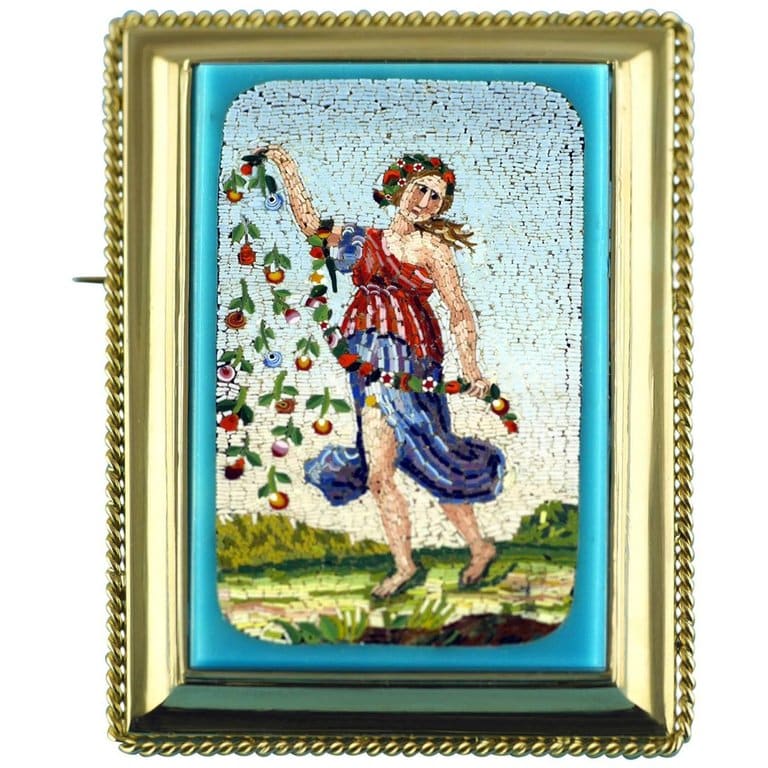 The early Victorian period corresponded with the beginning of the Industrial Revolution. Jewelry, no longer made only by hand, became more affordable. The growing middle class also helped increase the demand for it. This was reflected in how women styled their jewelry; they were not afraid to adorn themselves from head to toe with stacking and layering in between. Considering the time period (this was before the California Gold Rush), a lot of pieces were made using low-karat gold or were gold-plated. Fine gold wire was also employed frequently to add to the design. This is a nice trick to know when determining the date of Victorian jewelry. 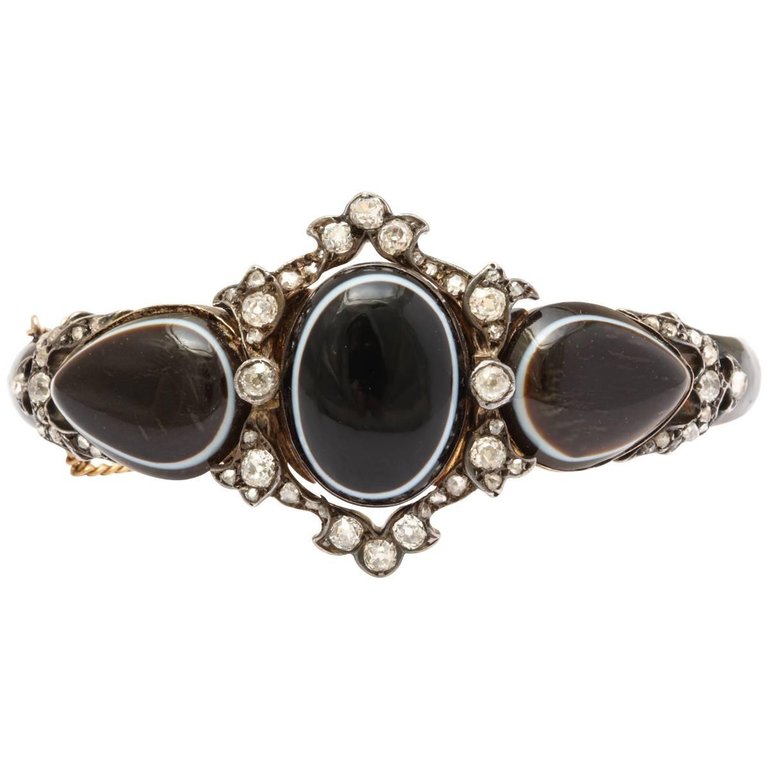 Everything changed with the death of Prince Albert. The heartbroken Queen donned black clothing and went into mourning. Her taste for jewelry reflected her deep sorrow, as well. This period is most often associated with mourning jewelry. While it first came into fashion during the Georgian period, mourning jewelry had a resurgence during this time.

Unlike the Georgian period, which was more focused on the macabre, Victorian mourning jewelry still tends to be romantic, a way to honor the memory of the departed. Most materials used were also black, the universal signifier of grief. Naturally jet, onyx and gutta percha were the most popular. Dark red garnets and black enamel were often used in combination with these materials. Hair jewelry became incredibly intricate, and some pieces were made with strands from various family members woven into a complex floral pattern. 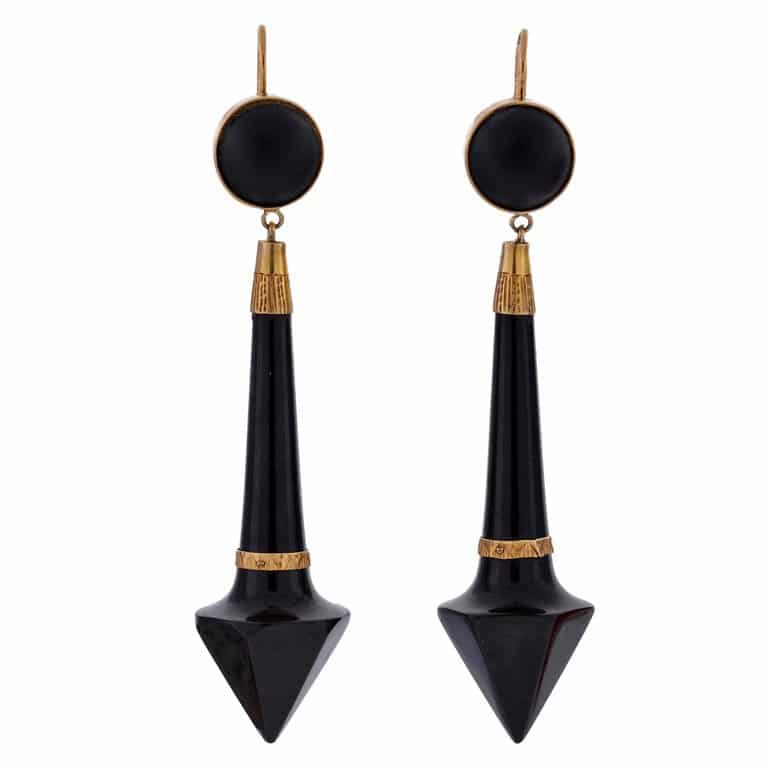 A few important events altered the look of jewelry during the Grand Period. Diamonds came into favor with the opening of the South African diamond mines in 1867. On the other end of the spectrum, silver began to appear in pieces, due to its discovery in Nevada in 1860. Low-karat gold was still used for the majority of jewelry produced. Stylistically, a trend for Revival jewelry took shape, including Etruscan, Egyptian and Roman styles, due to much-publicized excavations. A byproduct of this was the popularity of micro-mosaic (very small pieces of tessera or glass), which originated during Roman times. 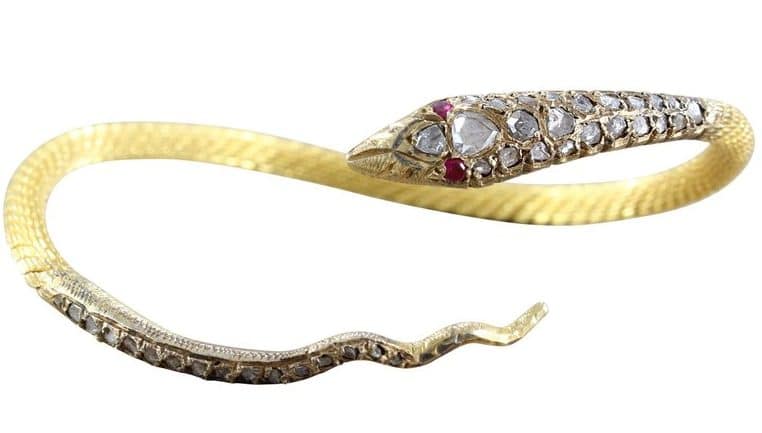 By about 1880, Queen Victoria and her constituents were ready to look to the future. The dark skies were parting and fashion was changing. There was also a major shift in industry. While in the beginning of Queen Victoria’s reign the focus was on manufacturing, toward the later years there was a renewed interest and appreciation of the handmade. The Late Victorian period (1880–1901) was referred to as the Aesthetic period and coincided with these changing tastes.

The Aesthetic movement, concerned with “art for art’s sake,” began in Britain around the 1870s and became recognized by designers and artists worldwide, eventually resulting in the Arts and Crafts movement (1880s–1920s). 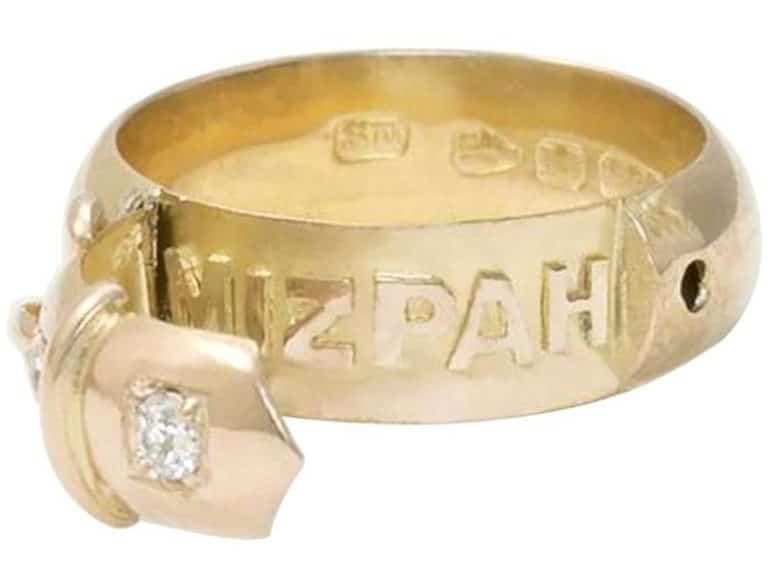 Stylistically, jewelry of this time period did not resemble its earlier Victorian counterparts, in fact it was in complete opposition to what preceded it. Gone were the mourning jewelry, heavy brooches and large necklaces. Jewelry was smaller, lighter and more dainty. Women still layered pieces, though, and favored smaller scatter pins. Jewelry also became an evening accessory and not so visible during the day.

Women were starting to actively participate in sporting events (socially, of course, not professionally), so athletic motifs showed up on their accessories. Lockets and heart pendants remained popular, but the REGARD or DEAREST rings were replaced by Mizpah pieces, which means “the Lord watches over me” in Hebrew. These items were exchanged between two people to symbolize a close bond.

Diamonds came into fashion, and semiprecious gems such as amethysts and opals became prevalent, too. Using gemstones for their natural beauty and not their worth was something that jewelers of the Aesthetics movement felt passionate about, and this ideology would really become relevant in Art Nouveau jewelry.

The Brits still looked to their monarchs to dictate the latest trends. Queen Victoria’s daughter-in-law Alexandra famously wore a dog-collar necklace, also known as a collier de chien, made up of multiple strands of pearls, to hide a scar. This style of necklace quickly rose to prominence. Toward the end of the 19th century, solitaire rings were also becoming fashionable thanks to Tiffany’s & Co.’s advent of the six-prong diamond setting in 1886. Platinum was starting to be used in jewelry production as well. 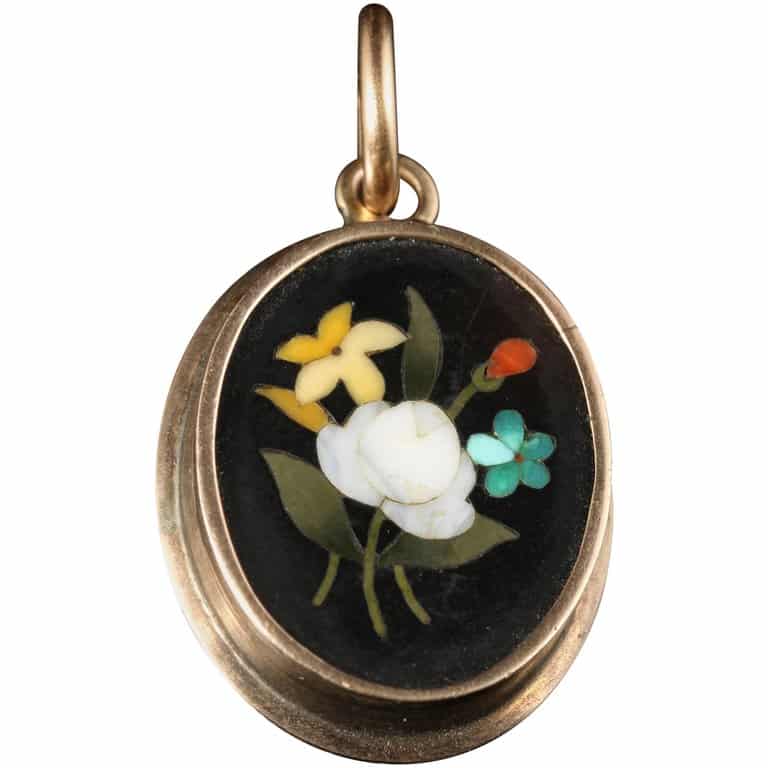 Women were the biggest influences on jewelry. They joined the workforce, fought for their independence and overall began to lead a much more active lifestyle. Jewelry had to become comfortable and serve multiple purposes. While in the United States, the Gibson Girls lifestyle was emulated by young women, and starlets became trendsetters.

Finally, the international expositions made the world seem like a much smaller place and jewelry from North Africa and India captured people’s attention, appealing to those who already favored Revival jewelry from the Etruscans to the Romans.