Opals were discovered in 400 BC, and since then five types have been found throughout the world. Before you start shopping for these mysteriously beautiful gems, learn about the different varieties — and find out which historical figure was reportedly willing to trade his kingdom for a single stone.
by 1stDibs Editors
Pin
Share
Tweet
Email 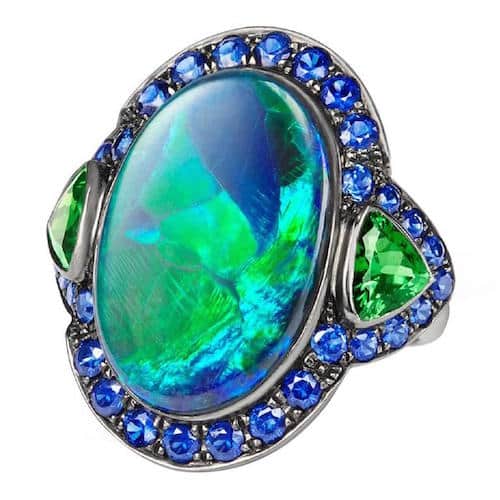 Here is a little riddle for you: the month of October has two birthstones, but only one of them encompasses the colors of other birthstones. If you guessed opal, you’re right!

Opals are such unusual gemstones that there are too many old-wives tales associated with them, like if you’re a blond, wearing an opal necklace will protect your locks from losing color. Opals were also very fashionable in the early 19th century, up until the publication of Sir Walter Scott’s novel Anne of Geierstein in 1829. The title heroine wears an opal and succumbs to an untimely death. However, the British monarchy, and in particular Queen Victoria, did not let this story get in their way, and they frequently gifted opals to friends and family members. October babies should disregard the noise and proudly wear their opals! 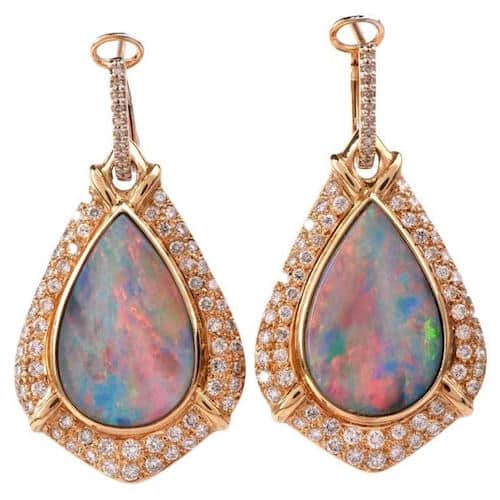 Opals are the product of a silicon dioxide and water solution. This dissolved silica substance is pushed through the earth by rainwater and deposited within the cracks of the earth’s strata. Once the water evaporates and the solution hardens, it becomes an opal. Opals fall into two categories: precious/gemstone variety and common. Precious opals are determined by their play-of-color (the rainbow-like mix of colors that distinguishes the opal from other stones), whereas an opal without radiance is known as common. According to the Gemological Institute of America, “play-of-color occurs in precious opal because it’s made up of sub-microscopic spheres stacked in a grid-like pattern — like layers of Ping-Pong balls in a box. As the light waves travel between the spheres, the waves diffract, or bend. As they bend, they break up into the colors of the rainbow, called spectral colors.” The various hues within the opal are a product of the different colored spheres.

There are five types of precious opals: boulder opal, fire opal, crystal/water opal, black opal, and white/light opal. Each variety is distinguished by its color. The GIA defines them as following: 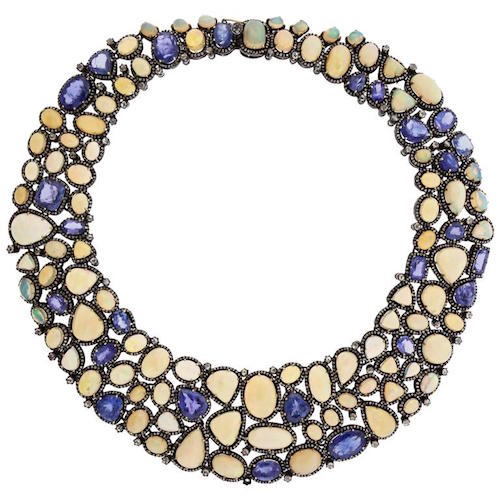 Today, Australia and Ethiopia are the two largest producers of opals. Historically, most of the world’s opals were mined in South Australia. It is here that a town called Coober Pedy has a reputation of being the “opal capital of the world.” Coober Pedy’s first opal was discovered in 1915 and currently there are over 70 mining fields, the most of any other place in the world. In one of these mines, called the “Eight Mile” opal field, a 17,000-carat, 11-inch-long Olympic Australis opal rough was discovered in 1956. Australia is particularly known for its black opals (which are also abundant in Nevada) and boulder opals. The stone is so closely associated with Australia that in 1993 it became the national gemstone.

Opals in Ethiopia are a much more recent phenomenon, with the first one mined in 1994 in the Menz Gishe District of the North Shewa Province. Fire opals are most common in Ethiopia, but they can be mined in Mexico, as well.

In the United States, Virgin Valley, Nevada, is an important mining region for a variety of opals. The famous Roebling Opal, a 2,585-carat opal rough was found here in the 1920s. The most famous mines are Rainbow Ridge, Royal Peacock, Bonanza, Opal Queen, and WRT Stonetree/Black Beauty Mines. In fact, the black fire opal is the official gemstone of Nevada. The yin to its yang, white opals can be found in Brazil. If you want to try your luck looking for opals, how about Mars? In 2008, NASA found some opal deposits on the Red Planet. 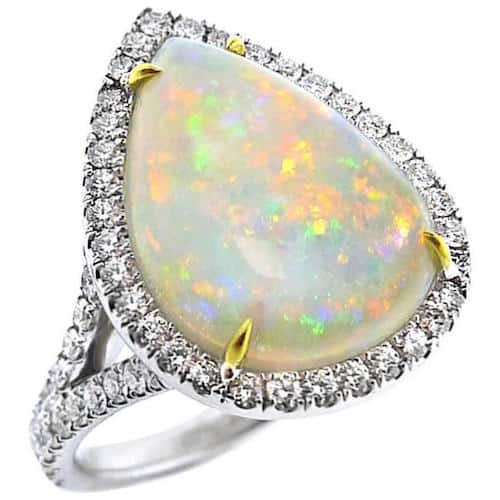 What’s in a name? The word opal is thought to originate from the Roman opalus or from the Sanskrit úpala (“precious stone”) or from the Greek opallios (“to see a color change”). So while there have been many names for the stones, opals were first discovered in 400 BC in Ethiopia. But the early reference that comes up most often in history books is from the Roman philosopher Pliny the Elder, who wrote about it in 75 AD. In his text he refers to it as opali. The Romans were big fans of opal, Mark Antony was so enamored by it that, as the story goes, he was willing to trade a portion of his kingdom for a single opal. And if Mark Antony favored opals then presumably his paramour Cleopatra did, as well. It’s not surprising, then, that the Romans were the first to cultivate a market for the gemstone.
And in case you’re wondering, the other gemstone associated with the month of October is tourmaline.