Considering your fate and honoring the dead are the messages behind these centuries-old styles.
by Colleen Egan
Pin
Share
Tweet
Email 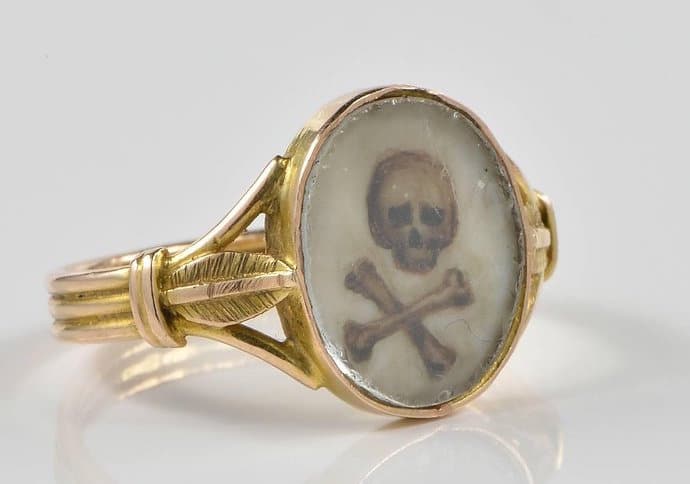 “Remember that you must die.” Translated from Latin, this is the meaning of memento mori, a message that spurred a style of jewelry. Dating as far back at the 16th century, memento mori jewelry is designed to remind wearers of their mortality, with designs that incorporate symbols of death like skulls and crossbones, coffins and snakes. Given the relatively short life expectancies for people at that time, did people need a reminder that they were going to die (and probably sooner than later)? 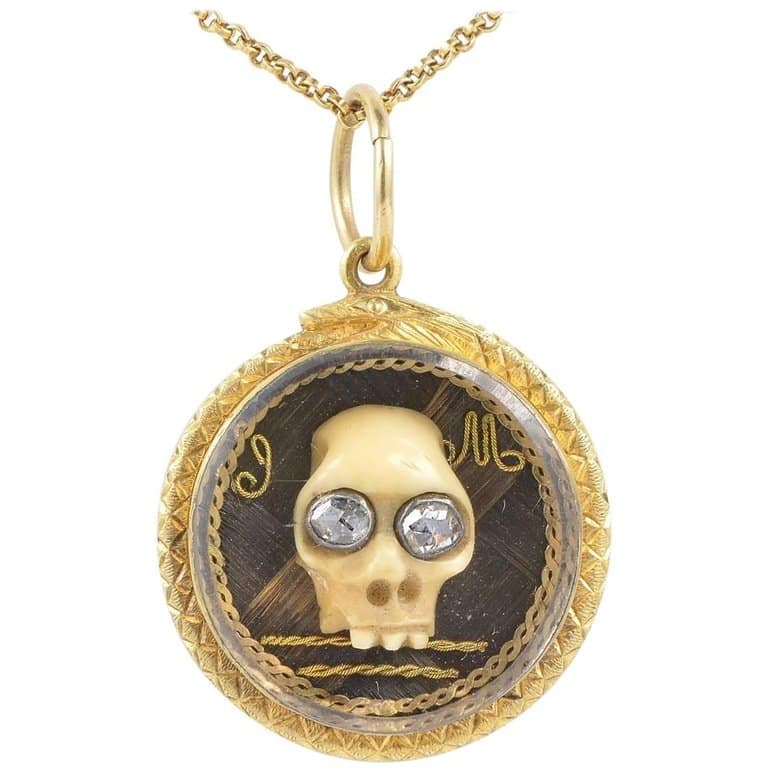 “Memento mori jewelry was rooted in deeply held Christian belief and the concept of a judgement day,” says Lindsay Salmon, part of the duo behind jewelry line Erica Weiner, which offers both original designs and antique pieces. “Wearing a piece of this jewelry is a constant physical and visual reminder that one day you will die, and when you do, you will be held to account for your sins. In other words, lead a virtuous life or spend an eternity damned to the fires of hell.”

But modern wearers of memento mori jewelry don’t have to take it so literally. “Whether you are a believer or not, I think memento mori translated to the modern day could serve more as a reminder that life is precious and short, so why not lead it with intention and treat others well because you never know when your time will be up,” Salmon says.

Memento mori and mourning jewelry are often lumped together, but they’re actually quite different, if not in style, then in purpose. While memento mori pieces serve as reminders of death in general, each item of mourning jewelry was designed or customized as a remembrance of a specific person. 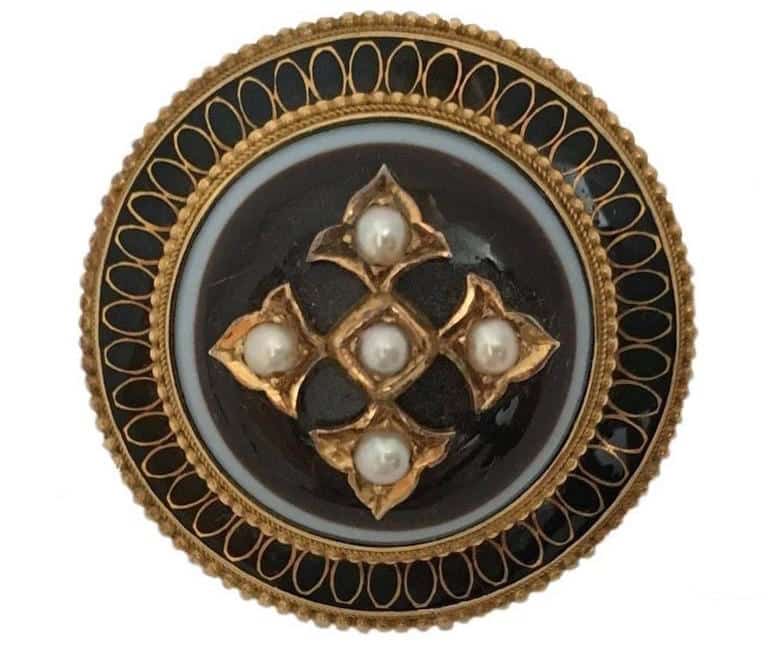 “Unlike most other pieces of antique jewelry, mourning jewelry has an easily accessible history,” Salmon notes. “These pieces are often inscribed with a name, a date of death and the age of the deceased. For many people, myself included, having this information about the person a piece of jewelry was made to commemorate is both fascinating and romantic; it grounds the piece in a historical and personal context.” 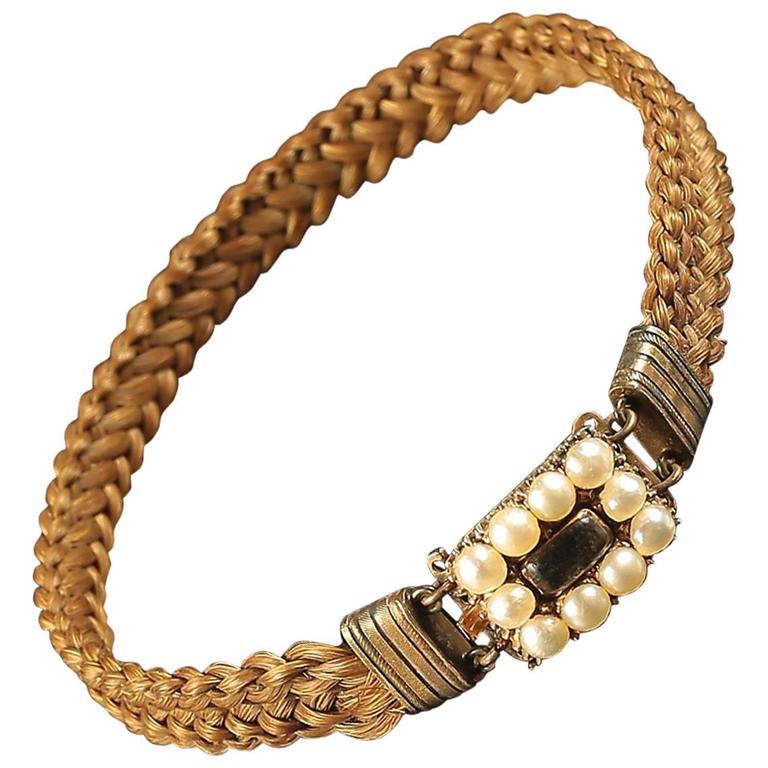 In addition to noting personal details of the deceased, many styles also feature braided strands of their hair. “For the person who can’t get comfortable with hair work, there are mourning rings made with enamel, precious gems, jet, the list goes on,” Salmon says. “For the collector who loves the sentiment of hair jewelry, there are not just rings with lockets containing hair, but entire ‘chains’ – three-dimensional earrings, bracelets – all made almost entirely from elaborately woven hair. These pieces can be exquisitely simple, ornate, minimal, flashy … mourning jewelry covers a lot of aesthetic ground.”

What’s the modern-day appeal of mourning and memento mori jewelry? “On the most fundamental level, what drew me to it initially is the way it looks,” Salmon says. “But I also like the immediacy of the history found in each individual piece and the idea of remembering a loved one through the wearing of a ring. I love the sentimentality.” She also says the jewelry tends to fascinate people, and it can be their entry point into the world of antique jewelry and collecting. 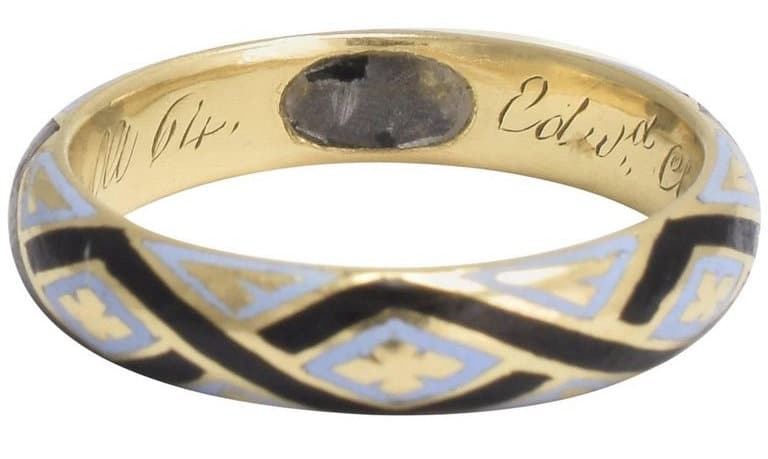 Salmon, a collector of mourning jewelry, says she wears her acquisitions often, which include an 18th-century full-body skeleton ring and a Victorian wide gold ‘In Memory Of’ band with a woman’s wedding band encased in the interior. “I have a beautiful Georgian mourning ring with lovely enamel work and amethysts that had had its original dedication removed, she says. “I bought the ring despite its missing information, and later had it engraved for my father.” 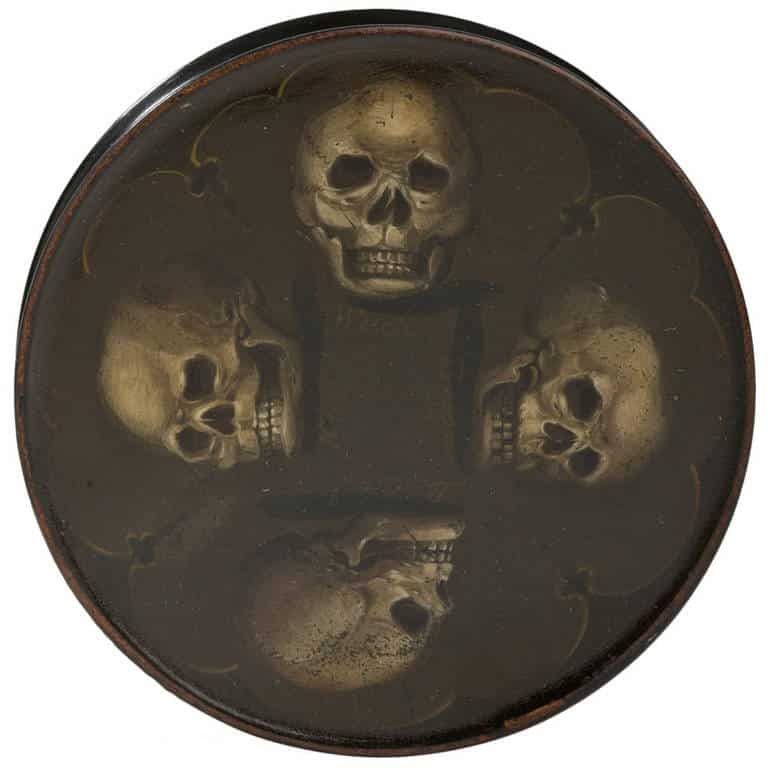