Why did the ancient Greeks and Romans believe this wine-colored quartz would keep them from getting drunk?
by 1stdibs Editors
Pin
Share
Tweet
Email 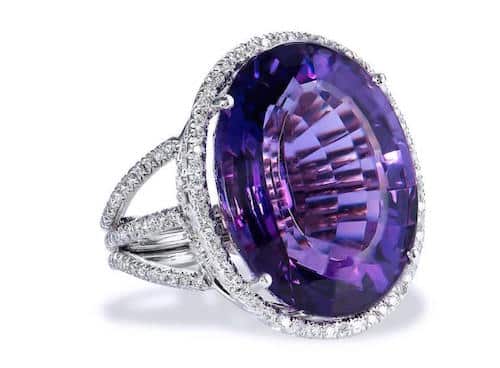 There are few gemstones in the world that are both affordable and worthy of a duchess’s attention. But then not many stones are as beautiful as amethyst. February’s birthstone has many unique attributes, even, as the legend goes, the ability to prevent you from getting sloshed. 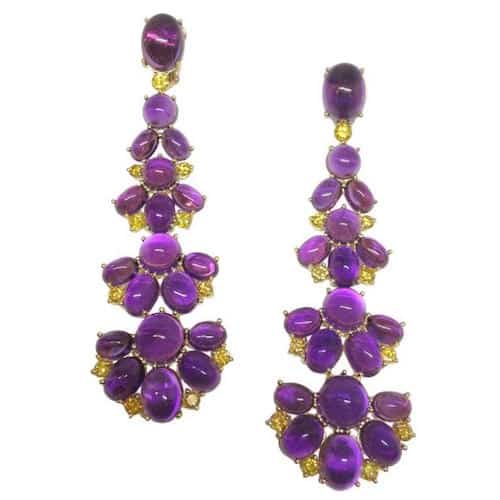 Amethyst is a purple quartz, its beautiful violet hue — which can range from a light pink to a deep purple — is the result of irradiation, trace elements and iron impurities. It is not uncommon to see a light to dark effect in one stone. This is called color zoning, and some amethysts exhibit a change of color in striations. The most desired color is known as “Deep Siberian” and has a primary purple hue of around 75 to 80 percent, with 15 to 20 percent blue and (depending on the light source) red secondary hues. 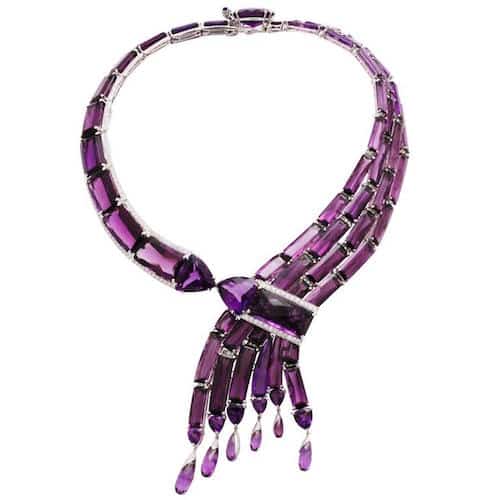 The word amethyst is rooted in the ancient Greek ἀ a- (“not”) and méthystos (“intoxicated”). Can you blame the Greeks, and the Romans, for associating the stone’s deep purple color with wine? If you happened to run into Bacchus, the god of wine, with an amethyst in your pocket, you would remain clear headed and withstand intoxication. Both the Greeks and the Romans made wine goblets from purple quartz and amethyst glass remains to this day a popular material for glassware. Assuming that consuming alcohol from an amethyst vessel will prevent drunkenness. For the romantics, there are several tales in Greek mythology that tell the story of Bacchus and Amethyste, a maiden that he pursues yet is rescued by Diane by turning her into a white stone. Bacchus, mourning his love, pours a glass of wine over the sculpture, dying her purple. 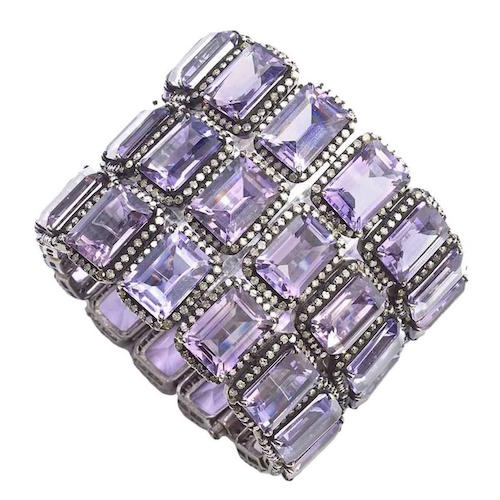 Amethyst has adorned many royal jewels. One of the most enviable jewelry collections of all time belonged to Wallis Simpson, the Duchess of Windsor. In 1947, the Duke gifted her with a Cartier amethyst and turquoise bib necklace. This special order piece was made with twisted 18-carat and 20-carat gold, platinum, brilliant- and baguette-cut diamonds, one heart-shaped faceted amethyst, 27 emerald-cut amethysts, one oval faceted amethyst, and turquoise cabochons. The Duchess was not the only Royal with a penchant for the purple gemstone. The tiara now owned by Queen Silvia of Sweden is set with amethysts that once belonged to the French Empress Josephine. The tiara was part of a demi-parure that was worn by Empress’s granddaughter, Josephine of Leuchtenberg (1807-1876), the Queen of Sweden and Norway. The necklace was far too heavy and thus converted into a tiara. A stunning 56-carat cushion-cut, square-shaped amethyst set in an 18-karat yellow gold necklace designed by Tiffany & Co. is now in the collection of the Smithsonian National Museum of Natural History. 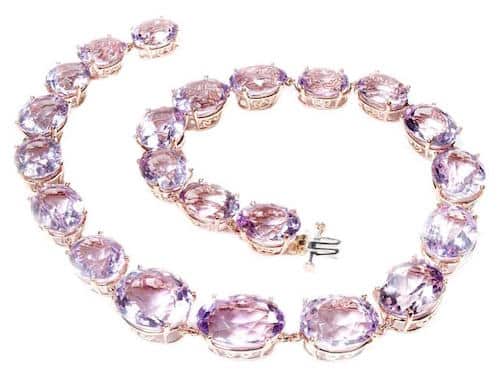 The Smithsonian also has in its possession an even more rare example of fine amethyst: the 96-carat Morris Amethyst Brooch. The brooch features a deep, rich purple heart-shaped amethyst. The museum states that the piece was likely made during the Edwardian period (1901-1915) “when platinum and diamonds were often used, and amethyst, a favorite stone of King Edward VII’s wife, Alexandra, was often included in jewelry of the era.” Another amethyst necklace, with an even richer story, can be found in the Natural History Museum of London. Known as the Delhi Purple Sapphire (even though the stone is an amethyst), this stone was stolen from the Temple of Indra during the Indian Mutiny of 1857. Anyone in the possession of this stone is bound to have terrible luck, including its owner Edward Heron-Allen, who gifted the gemstone to the museum thinking that this would save him but ended up transferring the bad luck to the museum curators overseeing the stone. 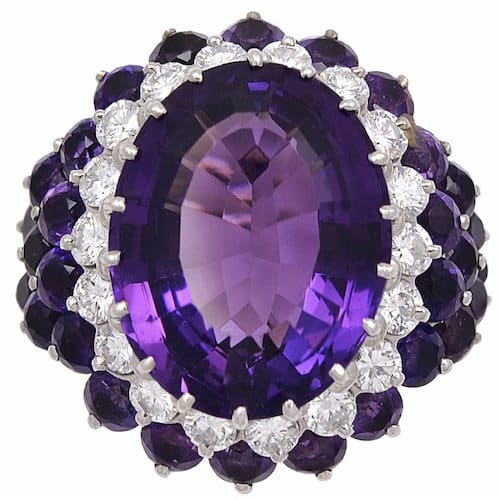 Amethysts are abundant in Brazil, especially in the region known as Minas Gerais. It can also be found in Rio Grande do Sul, Para and Bahia, also in Brazil. Artigas, Uruguay, is also known for its amethyst mines. In the United States, amethyst is widely found in Arizona, Colorado and Texas, amongst other states. The largest amethyst mine in North America is located in Thunder Bay, Ontario.