Born in the Netherlands in 1945, Jacobus spent his early years
surrounded by the landscapes and cloud-laden skies made famous by by the Dutch Masters throughout history.

Jacobus arrived in the United States in his early teens with an interest in art already indelibly imprinted. He started painting while in high school and received a well grounded education in the creative process. After graduating he traveled extensively in Europe and visited many of the famous museums and deepened his appreciation for fine art.

Upon his return to the United States Jacobus began to design and make jewelry. His unique and original works captured a following and contributed to his success as a goldsmith but he continued to pursue his first love, painting and exhibited both his jewelry and paintings at the Festival of Arts in Laguna Beach since 1978.

In 1994 Jacobus began painting on location during a trip to Santa Fe and exclaimed, “It was like discovering a new world!” On subsequent trips to New Mexico and Hawaii he produced vibrant color-filled landscapes that inspired him to begin a remarkable series of work that has been, and still is, widely acclaimed and admired. He currently divides his time between Maine, California and Hawaii.

A founding board member of LPAPA (Laguna Plein Air Association) Jacobus is being represented by galleries in Hawaii, California and Maine. In addition to many one man shows, he has participated in many group exhibitions and is one of the first living artists to be collected by the Irvine museum.

“I seek to expand my painting experience searching for scenes with a natural beauty that the viewer might miss in their rush through every day life. This could be as simple as the reflections in water of fishing boats tied to a dock, a wave breaking against the rocks or clouds floating across the sky. The more I paint, the more I see this beauty around me.” 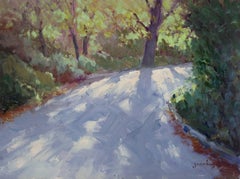 Find wide variety of authentic Jacobus Baas paintings available for sale on 1stDibs. If you're looking for a way to add color to a neutral corner of your living room or bedroom, you can find work that includes elements of blue, green and other colors. You can also browse by medium to find art by Jacobus Baas in oil paint, paint and more. Much of this artist's original work was created during the 21st Century and Contemporary, and is mostly associated with the Impressionist style. Not every interior allows for large Jacobus Baas paintings, so small editions measuring 9 inches across are available. Customers who are interested in this artist might also find the works of Garry Raymond-Pereira, Aibek Begalin and Johannes Schiefer. On 1stDibs, the price for these items starts at US$900 and tops out at US$14,000 while the average work can sell for US$1,600.